October 7 2015
40
The Prime Minister of Luxembourg, one of the financial centers of the European Union, as well as the state that took over the presidency of the EU for the next six months, Xavier Bettel, who arrived in Russia, said that in the European Union they see the lifting of economic sanctions against the Russian Federation. According to the Luxembourg Premier, both in the Duchy itself and in Brussels, they are satisfied with the results of contacts in the format of the "Norman Four". In particular, Brussels expressed satisfaction with the focus on compliance by both parties to the conflict in Ukraine with the Minsk Agreements - in particular, the forthcoming coordination of the law on elections in the Donbass between Kiev on the one hand and Donetsk and Lugansk - on the other. In addition, the European elite stated that the agreement on a cease-fire and the withdrawal of weapons in caliber to 100 mm are generally respected, and also ticked.


According to Bettel, all these measures "lead to a settlement of the situation in the south-east of Ukraine," and therefore when they next consider the possibility of extending or lifting sanctions against the Russian Federation, "European states will take this factor into account."

From the statement of Xavier Bettel correspondent Interfax:
Isolation of Russia is the worst option of all.

Sorry for such absentee familiarity, Mr. Prime Minister of Luxembourg, but in this case I would like to say:

Yes, you do not drift, Xavier! What kind of “isla-la-tion”, if you yourself, as head of the government of the EU presidency country, are in Russia and meet with representatives of the Russian authorities ...

Not only that, the Luxembourg Prime Minister also arrived to coordinate Duke Henri of Luxembourg's state visit to 2016 in the Russian Federation.
Generally, this man Xavier Bettel is interesting, of course ... Reflecting on the fact that the European Union will discuss the lifting of anti-Russian sanctions only in the future, he himself said that Luxembourg intends to open a financial platform in which to carry out ruble operations.

Luxembourg Premiere Statement Leads “To lead. Finance:
The leadership of Luxembourg sees no obstacles to the creation in Luxembourg of a financial platform for operations in rubles, subject to the presence of political will on the Russian side and the adequacy of supply and demand in the Russian national currency.

As can be seen from this statement, Bettel already completely opaquely hints that Russia should take all measures to actually overcome the existing economic sanctions. After all, the “ruble” market in Luxembourg, a state that is one of the world leaders in the functioning of the banking system, is also an opportunity to lend to those European partners that the “big brother” bans Russia from lending. Luxembourg has found a way out of the situation, providing an opportunity to carry out operations, as they say, on the spot, especially in rubles, and even in the very heart of Europe’s old woman ... And his statement about the “sufficiency of demand in the Russian currency” is also a subtle hint of thick circumstances. Already in Luxembourg, they are well aware that the demand will be such that the “client” (European Union) will forget about everything ...

What is the way to circumvent the sanctions found Xavier? - The Fund in Luxembourg will not be created by Russia, against which sanctions are acting, but (attention!) Moscow ... against sanctions (as a subject of the federation), sanctions packages were not specifically introduced, and Xavier, by all appearances, hinted at this non-transparent. As a result, the Government of Moscow in Luxembourg will open the very ruble platform for financial transactions in the EU, which was discussed by the Prime Minister of the country presiding over the EU. To make the construction bilateral, Luxembourg opens its financial representation in Moscow (namely, as a subject of the federation). It turns out, however, not an interstate partnership, but a partnership according to the formula “a state is a region of a foreign state”: Luxembourg (as a country) - Moscow (as a region of the Russian Federation).

From the report on the materials of the meeting between Bettel and Dmitry Medvedev:
During the meetings with the Luxembourg side, it was proposed to establish a specialized fund under the auspices of the Moscow government at the financial platform of Luxembourg, to create parallel or cross-funds in Moscow and Luxembourg with the participation of Russian and international capital respectively, to more actively use the advantages of listing and issuing bonds in Luxembourg, Luxembourg and Moscow stock exchanges complementary operations.

But why would such an attraction of unprecedented generosity from the Luxembourg "comrades"? Why is it quite tangible desire to spit on the sanctions lists, supported by the EU against Russia? Really Bettel, like all other politicians from among the adequate, was not impressed by the speech of the American leader, and Xavier realized that this black guy was entangled in three pines, and from under his intrusive political hyper-defense you can and should be gradually released? .. Well, this Of course, only assumptions so far. Here are the facts:

The fact is that the Luxembourg financial affairs in the Russian direction, as it turned out, are far from ideal. Due to the sanctions, imports from Luxembourg to the Russian Federation almost halved (by more than 45%), while exports from Russia to Luxembourg, albeit symbolically, but still increased by about 0,8%. Obviously, after examining such figures, Xavier Bettel suddenly realized that something strange was going on with these sanctions, and that Luxembourg was in the role of a loser from the crowd, which the States had gathered.

Considering the fact that a small but large country in terms of financial resources, Bettel was not at all used to being a loser from the extras, and decided to strike while the iron was hot. During the meeting with Russian President Vladimir Putin, the Luxembourg Prime Minister confirmed the information that the level of Luxembourg investments in the Russian economy had reached 40 billion dollars, and in the near future could grow by about 10% due to the initiative to create the cross-funds mentioned mutual trade in rubles. 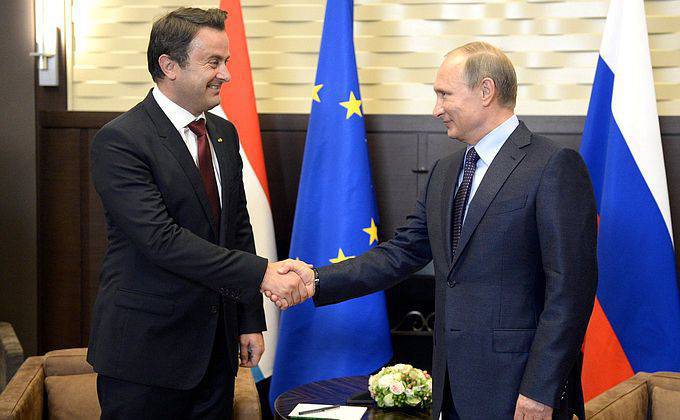 In general, the “Shreds of the Russian economy” canvas to its author, well, cannot be presented in its final form at international “exhibitions”. Every time there is some Xavier, who changes the "main artist" main palette ...

Ctrl Enter
Noticed oshЫbku Highlight text and press. Ctrl + Enter
We are
Results of the week. “Well, if you don't want anything else ...”Situational analysis of the death of the MH17 flight (Malaysian Boeing 777), made on the basis of engineering analysis from 15.08.2014
Military Reviewin Yandex News
Military Reviewin Google News
40 comments
Information
Dear reader, to leave comments on the publication, you must to register.