October 7 2015
20
On the Innovation Day of the Southern Military District, which took place on October 5-6, the Ministry of Defense and Industry presented a large number of various equipment, including several new products. So, one of the first public demonstrations of the perspective Typhoonenok armored car took place in Rostov-on-Don the other day. This machine is another representative of the "Typhoon" family and is designed to solve a wide range of transport and combat tasks.


As previously reported, the Typhoonenok armored car was developed by the KAMAZ auto-building company with the widest use of existing components and assemblies. It is based on the KamAZ-53949 truck chassis with the wheel formula 4х4. On the chassis is mounted the armored case of the original design, which is based on the achievements of the existing projects of the Typhoon project. In particular, some details of the Typhoonenok armored car were directly borrowed from the Typhoon-K car of the same developer.

Being a further development of the existing family, “Typhoon” has smaller dimensions in comparison with the existing equipment and other characteristics. Inside its armored corps there are ten seats for the crew and the landing: four (including the commander and driver) are facing forward along the way, the other six are located in the aft troop compartment, at the sides. The payload of the machine is 2 t. 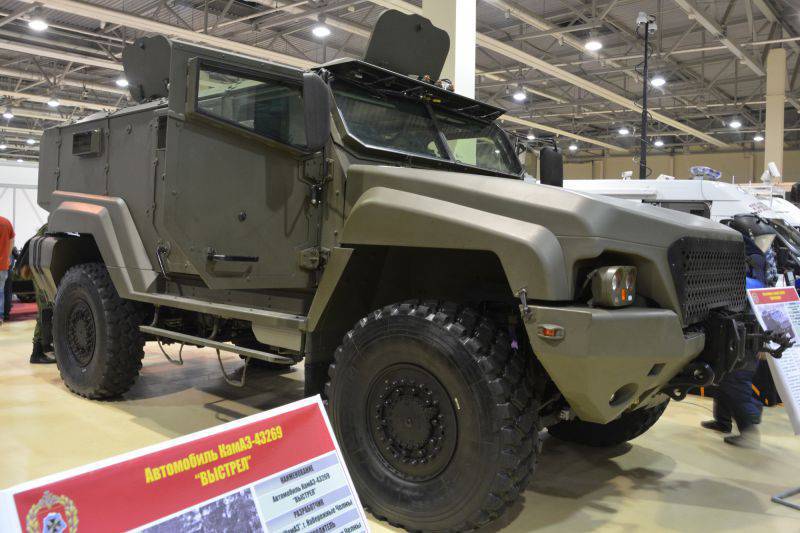 The design of the perspective armored vehicle uses modern combined protection based on metal sheets and ceramic elements. According to the developer, “Typhoon” has a ballistic 3 level protection according to the NATO standard STANAG 4569. Combined armor protects the crew from the armor-piercing bullets of the 7,62X54 R cartridge. Also, the design of the vehicle includes measures aimed at providing protection against explosive devices. The anti-mine protection of an armored vehicle complies with 3a and 3b class of the same standard. The crew of the car does not suffer fatal damage when 8 kg of TNT is exploded under the wheel or under the bottom of the car.

The typhoon armored vehicle is equipped with a Cummins 6ISBe 350 diesel engine with 350 horsepower. The structure of the transmission includes an automatic transmission, transfer boxes and other equipment. The existing power plant and transmission allows an armored car with a maximum weight of up to 14 t to reach a speed of up to 105 km / h on a highway.

New armored car can be used to solve various problems. First of all, it is the transportation of personnel or small loads, as well as escort convoy. In addition, after some refurbishment, an armored car may become an ambulance, reconnaissance, command and staff, or a different class of vehicle. Thus, the purpose of a particular machine depends primarily on the wishes of the customer and the appropriateness of the required modification.

It is reported that all work on the armored car "Typhoon" has already been completed. Probably, now the company-developer is ready to sign contracts for the supply of such equipment, build it and transfer to customers. Information about the possible orders of armored cars of the new model are not yet available.

At the exhibition "Innovation Day of the Southern Military District" one of the first armored cars of the new type was shown. The exhibition organizers opened all the doors of this car, and also kindly allowed everyone to not only inspect it outside and inside, but also to “try” the crew seats and workplaces. We present to your attention the photos of the armored vehicle located in the exhibition hall. 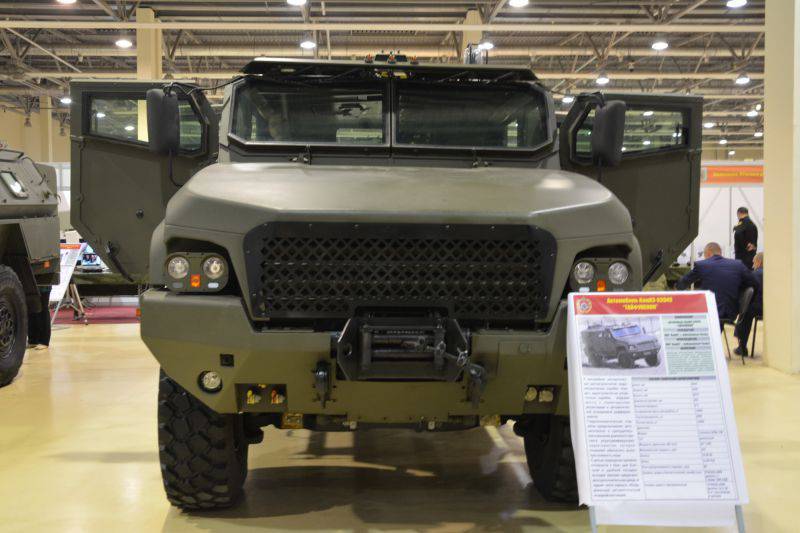 General view of the car 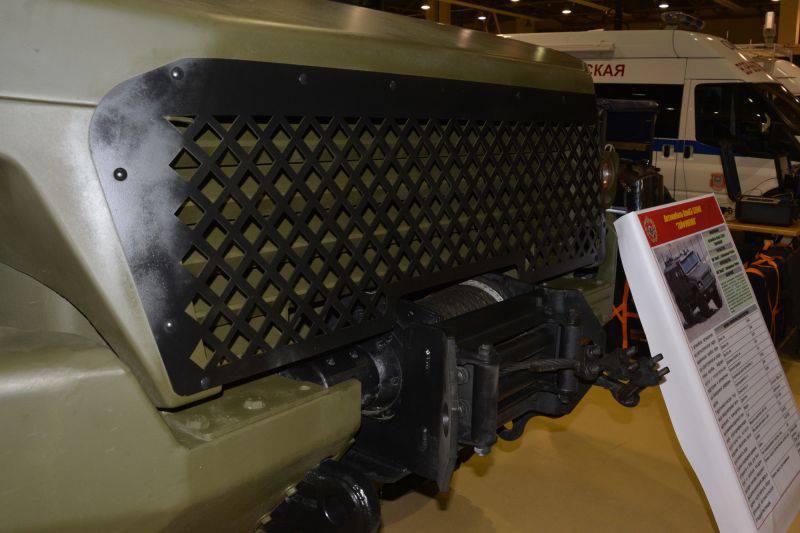 The characteristic grille. Blinds are provided behind the grille for better engine protection. 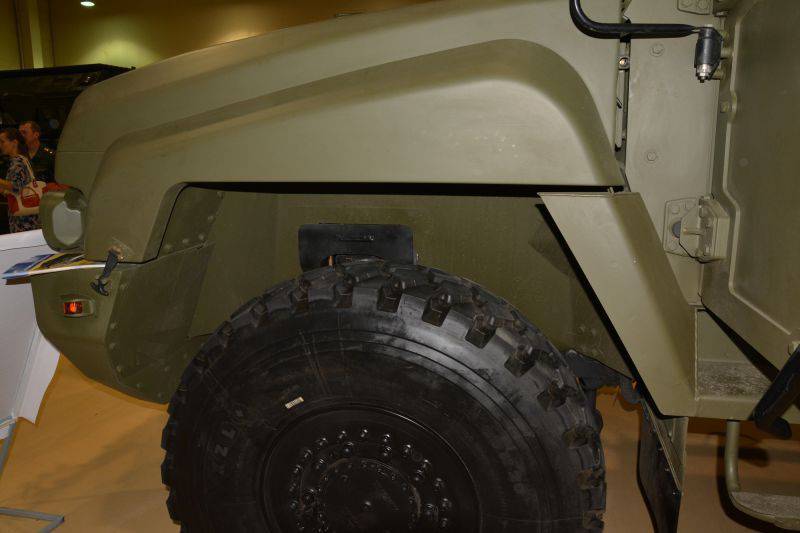 Motor protection is made as part of the armored hull 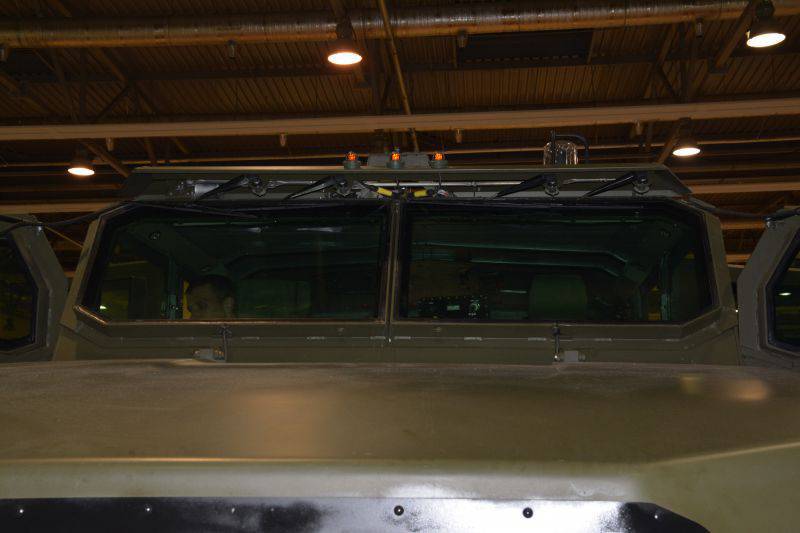 Windshield. You can estimate its thickness 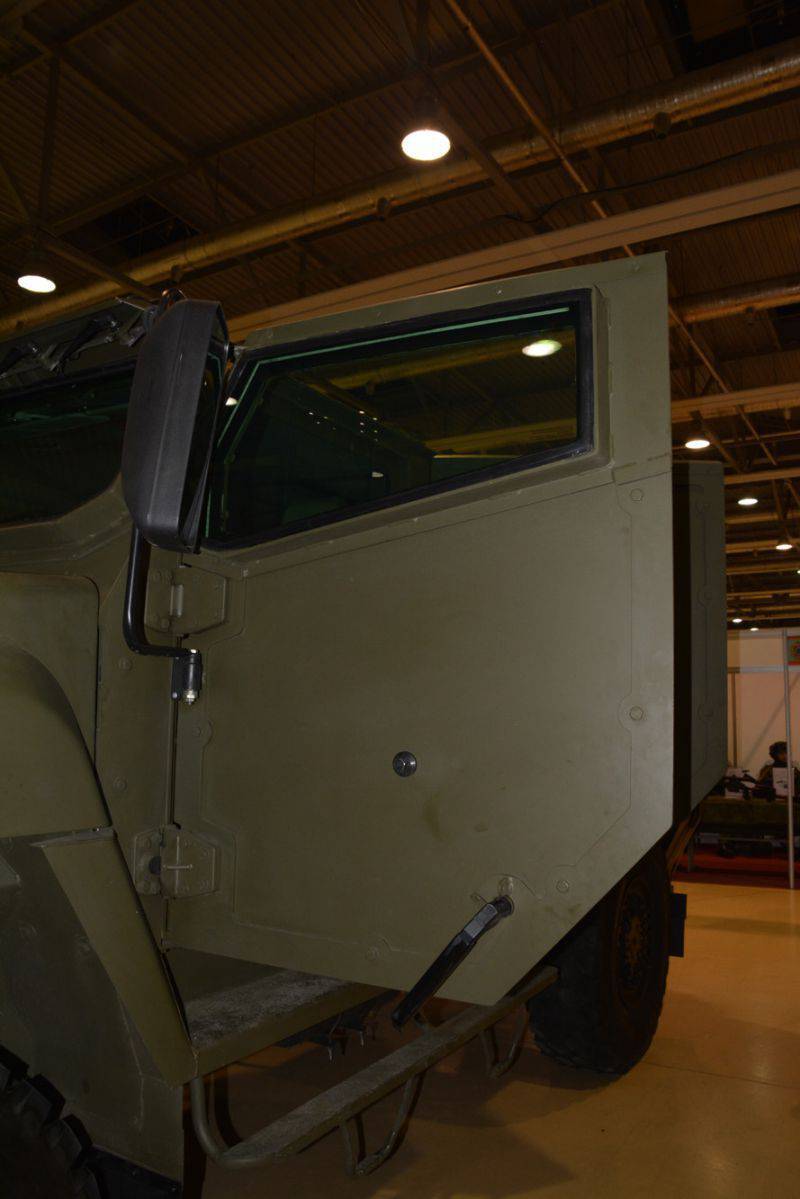 The driver's door. It is easy to notice the similarity with the doors of the armored car "Typhoon-K" 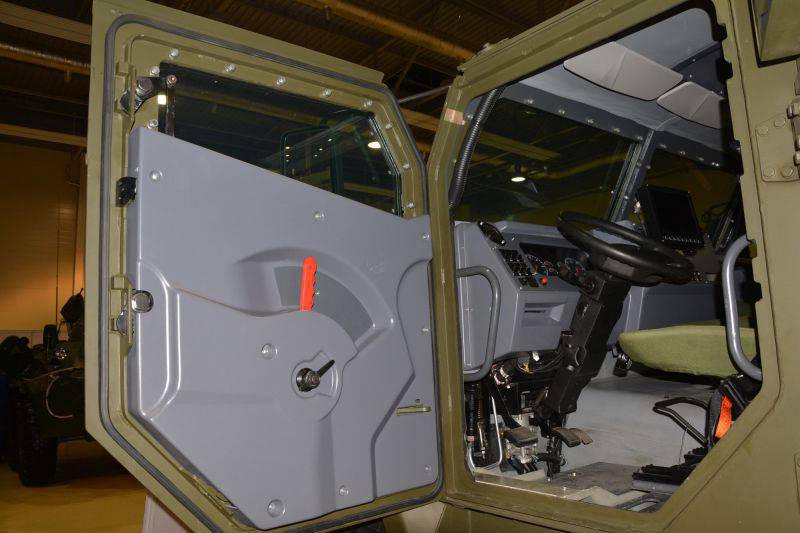 Driver's door from the inside. Another example of unification 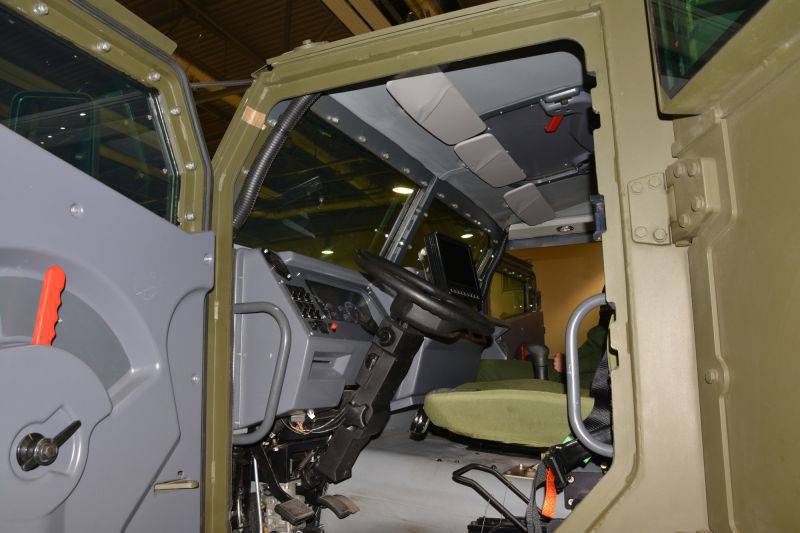 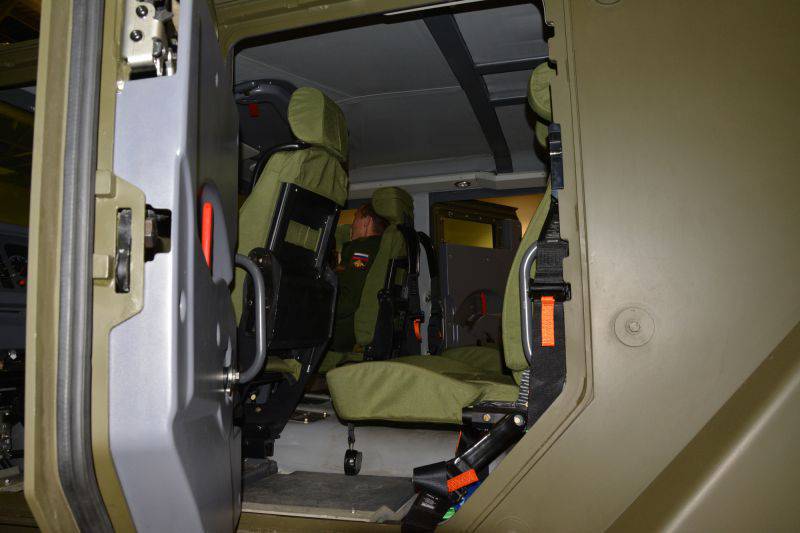 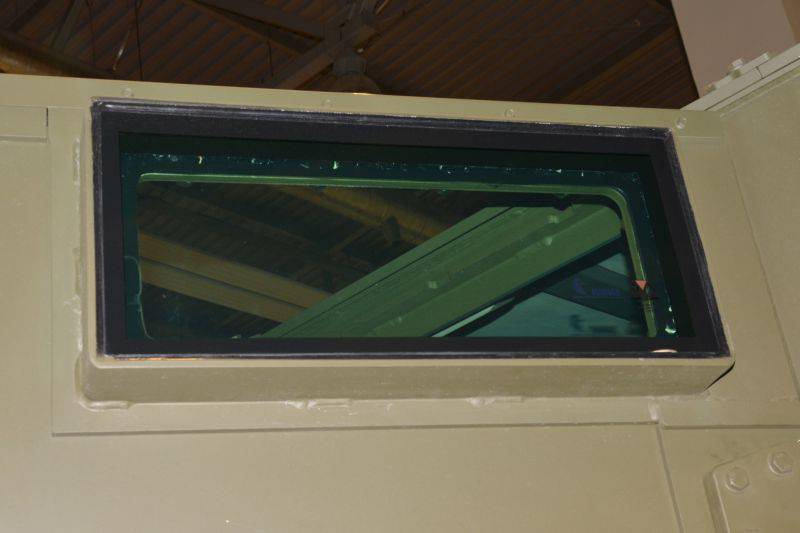 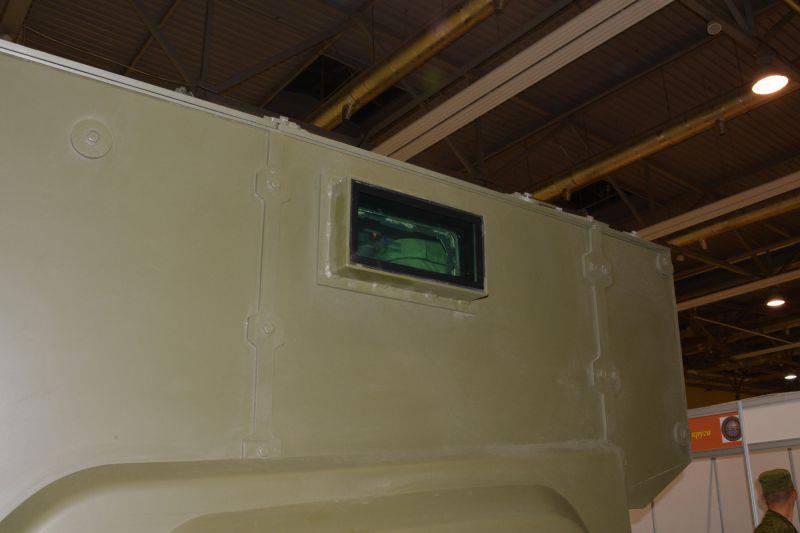 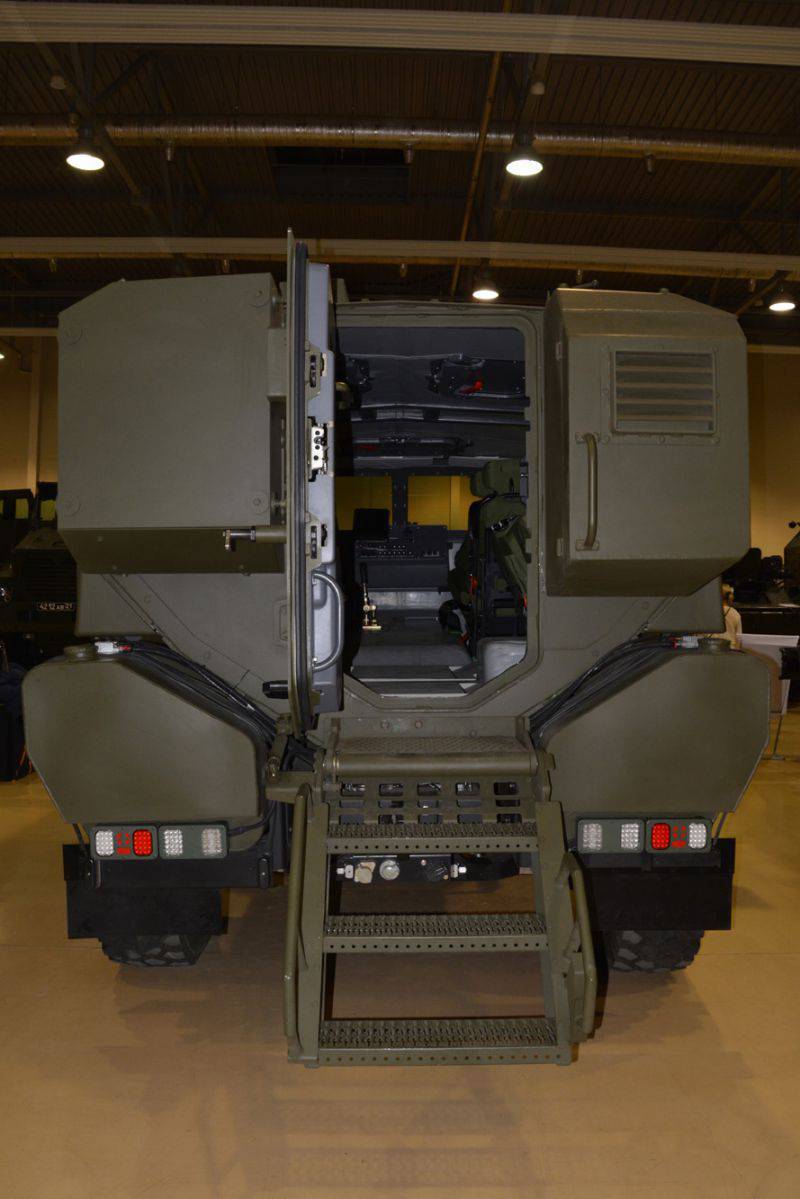 Aft of the armored car 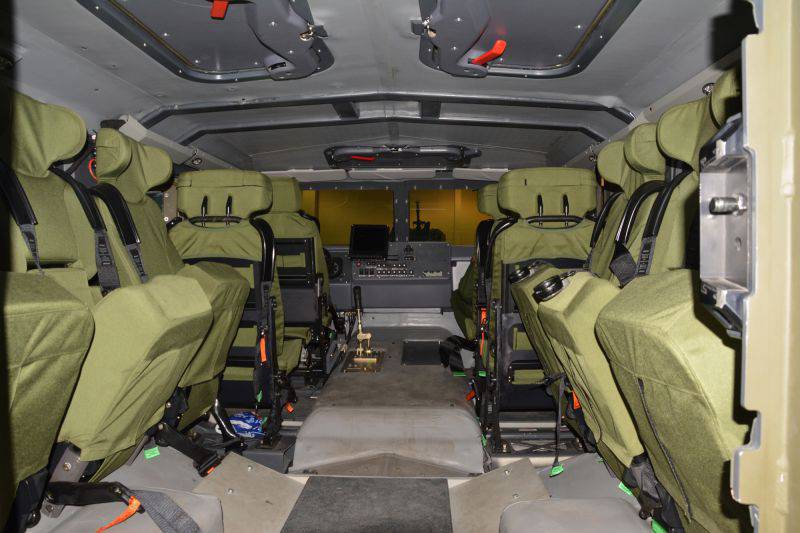 The crew and troops are located in the total habitable volume, the troops sit behind the driver and commander, as well as at the sides 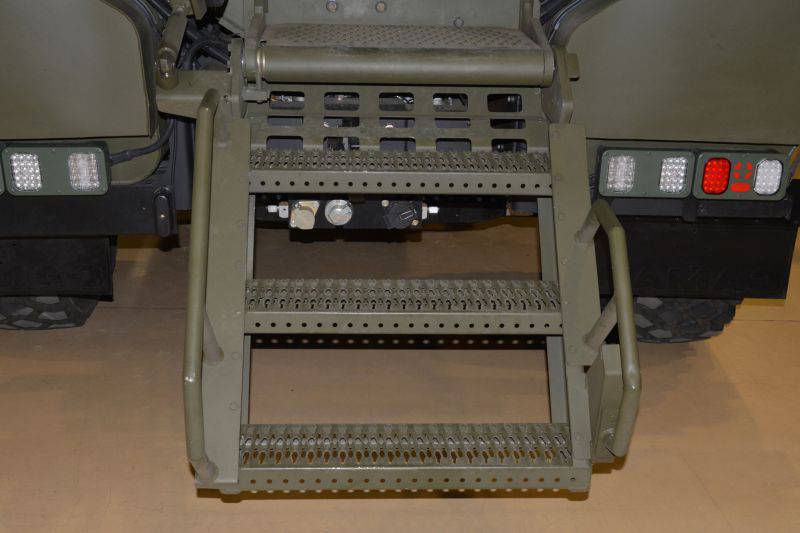 Ladder for landing. On the left, the lift cylinder is visible. 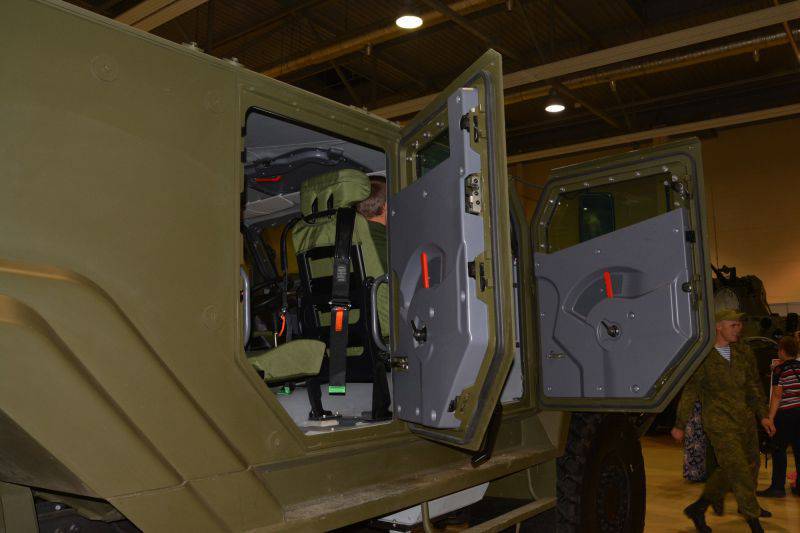 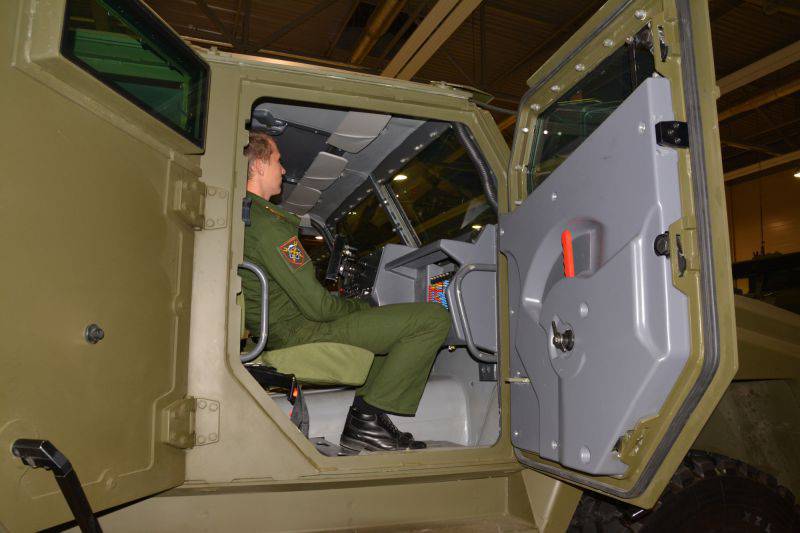 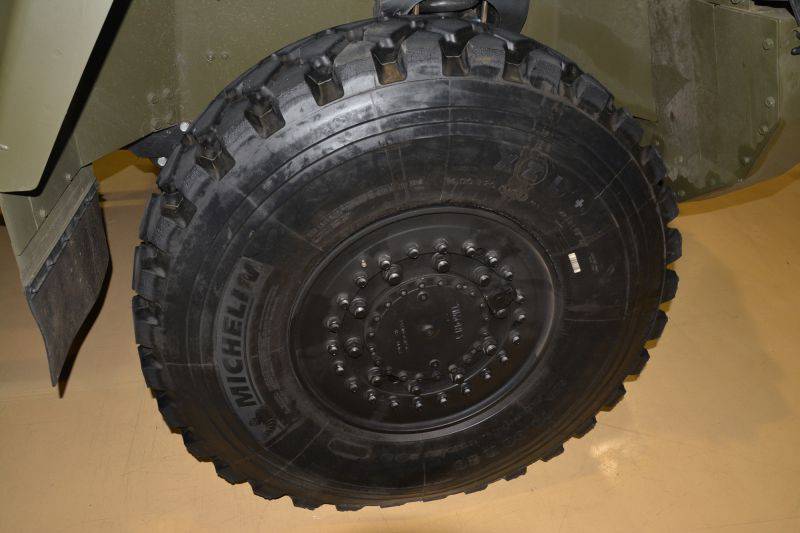 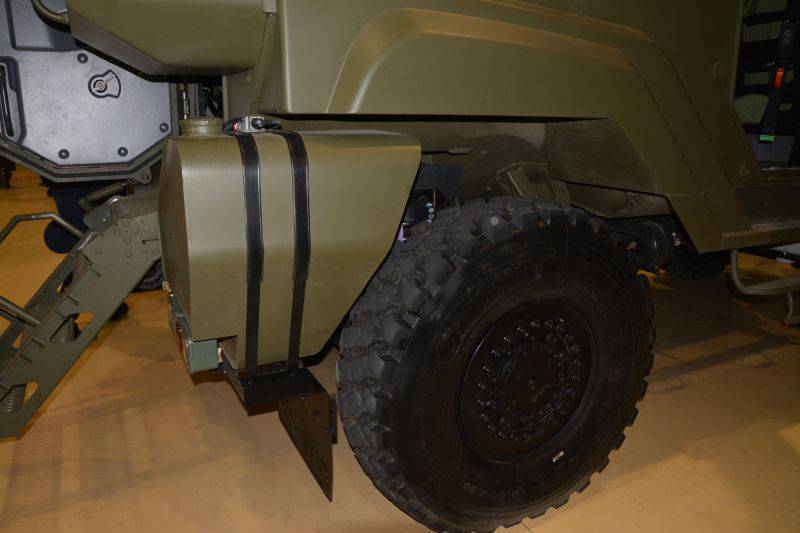 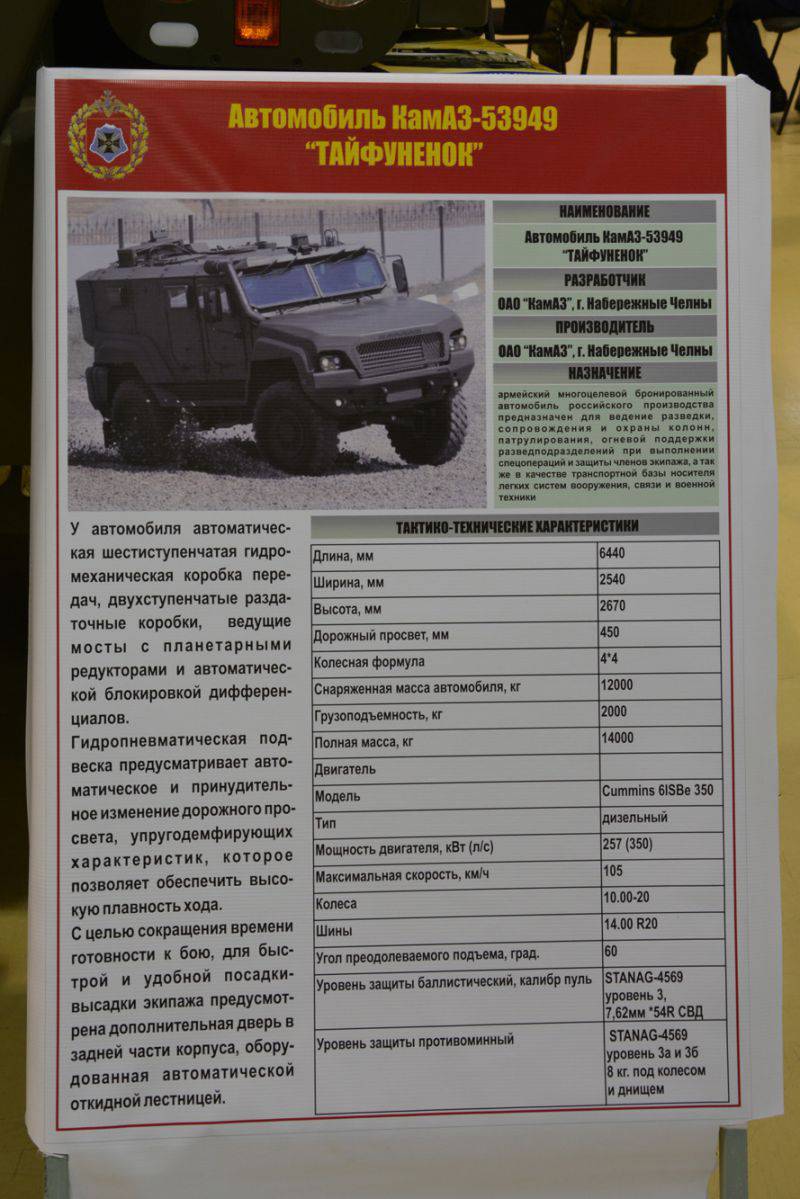