20 goals of the Russian military operation in Syria ("Publico.es", Spain) 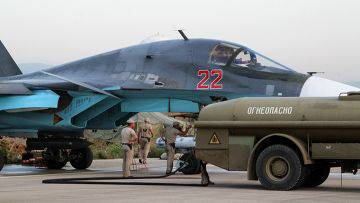 The decisive military operation of Russia in Syria, which began on September 30 in a difficult and confusing situation in this Middle Eastern country, and the plan of the Russian leadership to end the conflict changed the balance of forces in this part of the Earth. Vladimir Putin’s proposal includes the creation of an international coalition under the leadership of the UN, which will support the Syrian armed forces and the government of Bashar al-Assad in the fight against terrorism, holding parliamentary elections with the participation of a “healthy opposition”. First of all, thanks to his virtuoso military-diplomatic move, Putin was able to take control of the situation in Syria and show the ineffectiveness of the coalition led by the United States, which includes about 40 states. In a few days, Russian pilots destroyed more jihadist objects than a coalition in two years, which carried out about 7 thousands of air raids. As a result, ISIS militants were pretty scared, and their regional and global sponsors were taken aback.

1. To show all the inconsistency of the imaginary fight against terrorism, which the Western coalition is trying to demonstrate. Let the White House explain what the Afghan Mujahideen did in the Oval Office in 1983, of which with the help of the CIA, the British intelligence service MI6 and the Pakistani Interdepartmental Intelligence (ISI), subsequently grew up ISIL.

2. Demonstrate the illegality of coalition actions. Russia has a request for assistance coming from the Syrian government, and permission from the Federation Council to use the Armed Forces abroad, that is, its actions are in full compliance with international law.

3. To declare oneself as an important world player and in opposition to US policy, which is responsible for spreading religious terrorism throughout the world, put forward a viable peace plan. So if someone is looking for a world leader, then he is in front of you: he uses diplomatic methods, but he acts tough.

4. Show military power, forcing the whole world to closely monitor the Russian actions in Syria, on a glow reminiscent of the 1962 Caribbean crisis of the year.

5. To split the ranks of the coalition: Germany and even Turkey and Saudi Arabia support Putin’s peace plan, which managed to convince them that the main threat to the world comes from ISIS, and not from Assad.

5. Relieve pressure on the Syrian leadership. Go from the Western thesis "Assad should go" to "at the moment it is better that he stayed."

6. Strengthen Russian positions in Syria, and ultimately, in the entire Middle East, which will allow to negotiate with the West on the lifting of sanctions imposed in connection with the annexation of the Crimea.

7. Negotiate the future of Ukraine. Until now, Russia has preferred an unstable Ukraine on its western borders to Ukraine, which has become part of NATO. Now, having restored order in Syria, Moscow will talk about Kiev in a different key.

9. Offer Saudi Arabia resignation from the post of Syrian president in exchange for the termination of financing of Islamic extremism in the region.

10. Play the role of the force that by non-violent means removed Assad from power, and replacements to get the decisive vote in the choice of his successor.

11. To restrain the further advance of the Islamists. Chechens, led by field commander Tarkhan Batirashvili, are the largest contingent of foreigners in the ranks of ISIL. In this regard, Moscow enjoys the support of China, which is also the object of a terrorist threat.

12. Show the effectiveness of the coalition in Russia, Iran, Iraq and Hezbollah, acting jointly with the Syrian army, as well as the Iranian and Lebanese military, leading military operations in the Syrian territory. Iran’s great success is that it has achieved a half-year cease-fire from Turkey (the sponsor of Al-Nusra and the Free Syrian Army).

13. Raise the price of hydrocarbons — because there are now four global oil producers — Russia, Saudi Arabia, Iraq, and Iran — participating in hostilities. Price increases will have a favorable effect on the Russian economy. But these prices are set by political circles (Saudi Arabia and the United States), not paying attention to supply and demand.

14. To disrupt the plans of the United States and Turkey to create a no-fly zone over Syria, designed to protect Islamic radicals, and then begin to ruin the country, after which countries would begin to collapse along the lines of Iraq, Yugoslavia and Libya.

15. Change the composition of regional alliances: Israel is moving closer to Russia. In addition to negotiations on the creation of the Customs Union, it agrees with Moscow on Israeli fighter flights over Syria and is considering the possibility of transferring Russia control of the Leviathan oil and gas field on the Mediterranean shelf, thereby preventing a possible attack on him from Iran or Hezbollah. In exchange, Moscow would block Iran’s deliveries to the Lebanese militia and would suggest that Tehran withdraw its troops after normalization of the situation in Syria.

16. Show Iran that only Russia can support the regime, although Russian fighters use the airspace of Iran and Iraq to get into Syria. That is, Iran seems to be sent a signal: “when approaching the West, take into account Russian interests.”

18. To put pressure on Recep Erdogan (especially now when his position is very weakened by the election results; there are two million Syrian refugees in the country and a new civil war with the Kurds is brewing) to stop supporting the forces opposing Assad.

19. Enlist the support of Egypt, the main country in the Arab world. General Al Sisi intends to eliminate the Islamists.

20. Return to the club of western countries. And this is a signal to those left-wing forces that still confuse modern Russia with the USSR and consider Putin to be Lenin’s reincarnation, and not the leader of the capitalist ruling circles who are partners with NATO with 1994. Another thing is that a polycentric world order is better for maintaining peace on Earth than a monocentric one.

Russia cannot consider Syria as a second Afghanistan due to the following circumstances:

· Afghan Mujahideen Received the Most Modern from the USA weaponIn particular, the Stinger man-portable air defense systems. In Syria, Russia has military superiority over the enemy.

· In Syria, flat terrain, no mountains and ravines, where you can get into an ambush. But even so, the Russian authorities say that the troops will not be sent there.

· In Afghanistan, Soviet troops faced the hostility of local residents; in Syria, part of the population sees Putin as their savior.

· Russia operates from the sea and the air. If it blocks the passage to the Mediterranean Sea, it can lead to a direct collision between the two superpowers.

Moscow is aware that Assad irretrievably lost power over the country. Now it is necessary to save the area around Latakia from the Alawites and to keep the most important Russian ship maintenance station in the port of Tartus there.

The relief that Obama experienced after hearing about the Russian initiative in Syria did not last long. Republicans are tightening their attacks on Democrats, not only because the latter have lost control over another Middle Eastern country, but also because under Obama, the United States has ceased to be an important global player.

According to them, the enemies of America are Russia and Iran, not China, as the president believes.

Obama is still opposed to sending troops to Syria (as well as to Ukraine) for the following reasons: failures in Iraq and Afghanistan, where another Talipan plane, which had just seized Kunduz, was shot down by another NATO plane; the conviction that such actions could force Iran to arm itself seriously; the inability of the Syrian opposition to unite and put forward a viable and viable alternative, as well as the fact that, contrary to expectations, the people did not support the rebels, who turned out to be much more brutal than the army.

Obama also fears that complete destabilization of the situation will pose a threat to Israel’s security, and a possible power vacuum, which is formed after the departure of Assad, will be taken by Islamic terrorists. In addition, Syria does not have the necessary strategic importance that could justify a ground operation and apply the Doctrine on the Responsibility to Protect the Population. And finally, on the eve of the 2016 election of the year, Obama least needed a stream of pictures of his decapitated soldiers or hundreds of coffins with their bodies.

Obama must either agree to the Russian plan, or go for a clash with Russia in Syria. None of these decisions will add votes to the Democrats.

The script is complicated

Despite the fact that Russia has currently changed one scenario, it has encountered another one, which includes the Pentagon’s plans of military actions against Russia from the territory of Estonia, Latvia, Lithuania, Poland, Bulgaria and Romania.

It is unlikely that Putin’s perilous game, which does not involve any actions aimed at reducing the suffering of ordinary people, will achieve its goals. We should not forget that this military operation will adversely affect the budget and, as a consequence, the welfare of the population.

In a word, one should not expect a happy ending for the participants of the Syrian feast.

Most likely, in Syria, the tragic Libyan scenario, followed by the Balkan scenario, will be carried out for a few more years.

Ctrl Enter
Noticed a mistake Highlight text and press. Ctrl + Enter
We are
Ukraine in US plans directed against Russia ("Publico.es", Spain)Syria: Americans scare themselves, and Asma Asad buys chairs
30 comments
Information
Dear reader, to leave comments on the publication, you must to register.