October 7 2015
77
The warnings that Ukraine is about to launch an attack on Donetsk and Lugansk have recently become something of a parable about a boy who shouted about wolves until he was no longer trusted. True, the final of this stories equally indicative: the wolf appeared just when it was not expected. In our case, the role of the wolf is played by units of the Ukrainian Armed Forces and the National Guard, who once every few months pretend to prepare for a decisive offensive, and then simply play back. This happened so often that now, when the movement of Ukrainian technology began in the frontal zone, the Russian public, carried away by reports from Syria, almost ignores this fact. Nevertheless, judging by the information “from the other side”, now everything is an order of magnitude more serious than before. 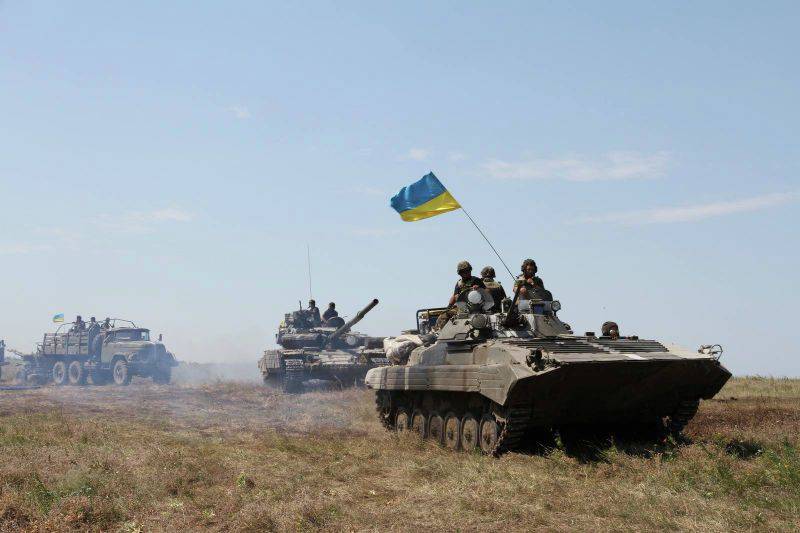 According to bloggers and local residents, the frontline zone is saturated with Ukrainian tanks, armored personnel carriers and artillery. Ukrainian troops are massively deployed in free living space, and they are hardly accommodated there for a comfortable winter. It is possible that all this activity is directly related to both Middle East events and the election campaign in the USA.

In the media of the United States after the start of the Russian bombing, criticism of the current administration has become tougher. In general, cursing the president in the United States has long been a good tone, but now it’s not even Obama’s reputation that’s already played the card, but the image of the next candidate from the Democratic Party is at stake. Experiencing difficulties in Syria after direct Russian intervention on the side of Assad, many politicians overseas could easily have thought of pushing Poroshenko to take action, especially since the Ukrainian army had long since recovered from defeat in the Battle of Debaltseve. For the entire period of calm, new and restored old equipment is being delivered to the troops, mobilization activities continue. Now the Ukrainian group is concentrated in the Donbas, according to various sources, from 90 to 250 thousand people. According to Igor Strelkov, who continues to actively monitor the situation in the DPR and LPR, in some areas there is a fivefold superiority of the army of Kiev over the people's republics, and now this whole military machine has come into motion. And it is against this background that Donetsk, Lugansk and Moscow continue tireless dances around the Minsk agreements, completely forgetting what all the treaties with the Nazis are worth. A regime whose officials declare plans to assault not only the Crimea, but also Kursk, Rostov and Belgorod, in principle, will not comply with any treaties.

Ukraine is not interested in economics for Americans. Neither shale gas, nor chernozem, nor coal, much less industry, they do not need. Square is important for all US administrations only in one capacity - as a ram against the Russian Federation. And all its resources were supposed to be only an aid for Kiev in this important matter, providing it with currency for the purchase of weapons. The Anglo-Saxons traditionally prefer to turn things around not only by someone else’s hands, but also, preferably, at someone else’s expense. In other words, modern Ukraine is a mine laid by the Americans near the Russian Federation, and it will work exactly that moment when they want it.

The internal political atmosphere in Ukraine also has to military adventures, because the alternative may be a new Maidan. American curators do not care who will carry out their orders while in the chair of the president - Tymoshenko, Avakov or someone else. Poroshenko will strive with all his might to prove his loyalty and irreplaceability, especially in the conditions when his support among the masses tends to zero. In addition, we must remember that winter is ahead, and Ukrainian citizens have not yet received a receipt for heating, calculated at the new tariffs. Official television is increasingly trying to turn the arrows on Yatsenyuk, but it’s not to reassure people with just the resignation of the Prime Minister. So the order from Washington to start the offensive is almost as beneficial for the current regime as for the Americans. And information about the transfer of a small, but far from worse, part of the Russian Air Force to Syria will only give him courage.

And now about another bunch of Syrian events with what is happening in the Donbass. A large-scale anti-Russian provocation is increasingly possible, in order to prevent the return of the Russian military at a critical moment for the country. The scenario in which Turkey closes the Straits for Russian ships with military cargoes is not excluded, and Iraq, at the request of the Americans (the latter is unlikely, but theoretically possible), ceases to let Russian aircraft pass through its airspace. At the same time, quite a large and efficient Russian group turns out to be blocked in Syria. The soil for closing the Straits, apparently, is already being prepared. The noise around the violation by Russian aircraft of Turkish airspace was not raised by chance. Any big business starts with small matters and what else today seems impossible, in six months it runs the risk of becoming a reality. It should not be forgotten that the US Air Force Base Incirlik is located near the Russian facilities from Syria, in Turkey, which can also play its role.

The strategic goal of the Syrian and Ukrainian conflict is the same: to exhaust Moscow, to deprive it of its resources, to bring the Russian economy first to collapse. Moreover, the general offensive of the Armed Forces of Ukraine for this is not at all necessary. It is enough that they create a constant voltage at the border. I do not want to think about what can happen in the event of a paralysis of the control system in Moscow, if the entire current Ukrainian group remains in place. The words of Turchinov about the readiness to accept the Kuban to Ukraine will be mentioned here very appropriately.

The underestimation of Ukraine, its ambitions and military capabilities is comparable in Russian society with the underestimation of Japan before the Russian-Japanese war. Even demographically, the ratio of opponents then and now almost coincides. However, if the Russo-Japanese was for us a classic colonial conflict that has nothing to do with the war for the survival of the state, then a possible war with Ukraine will be a battle for internal Russian territories. Observers say that the army of our neighbors, although it lost a huge amount of equipment, but made a qualitative leap forward in the training of personnel, and the technical part is constantly updated.

One way or another, it is Donetsk and Lugansk, and not Syria at all, for Russia are the first lines of defense. Letting them in will mean that the threat is directly on the borders of the Russian Federation, not to mention the moral consequences.

Ctrl Enter
Noticed a mistake Highlight text and press. Ctrl + Enter
We are
Airborne of Russia interested in armored military-industrial complex 39273 "Wolf III"Donetsk: City Day and Miner's Day
77 comments
Information
Dear reader, to leave comments on the publication, you must to register.