October 14 2015
7
In late September, the Leningrad Zoo turned 150 years. History it is rich in events, both joyful and sad. We will not give it in great detail, with the names of all owners. But we will stop on the most heroic part - blockade time.


So, the zoo was born in 1864 year. Its creators, the wife of Julius and Sophia Gebrardt, decided to establish a European-type zoo in the city. Generally, in St. Petersburg, it was said that the opening of the garden was entirely due to Sofia, although Julius received the Highest permission to build. The fact is that Sofia Gebrardt was engaged in the sale of waffles. Yes, so successfully engaged in that its products were known throughout the city. She herself, dressed in the neater way, sat in a small pavilion and received buyers. Sofia organized home delivery, and this made her fit into many noble houses.

The opening of the zoo in the capital has aroused great interest among citizens. But in fact, it turned out that far from everything was thought out. For many animals and birds they did not prepare winter apartments, and they died in the very first winter. Yes, and there were not so many visitors as expected. In short, the lack of experience affected. But spring had hardly come, an enterprising Sofia opened a dairy farm with a buffet in the zoo. Here they sold cream, sour cream, milk, yogurt, butter of cows, specially brought from Holland. By the way, the cow was also shown to visitors.

Significantly expanded collection of animals. Spouses kept a large group of predators and animals of hot countries. And the first toddler born at the zoo was a marsupial rat.

Zoo accepted and gifts. So, Alexander II gave two elephants, and the Prince of Oldeburg - madril.

But, despite the efforts of the spouses, things were going hard. And the situation became especially difficult after the death of Julius. And then Sophia, who at that time was about sixty years old, decided to take a desperate step: she married Ernest Antonovich Growth, a young man twice her age.

Growth set to work energetically: very quickly put all the buildings in order, significantly updated the collection of animals and even opened a theater for five hundred places. It is noteworthy that the zoo had its own orchestras: first brass, and then symphonic! The so-called symphonic Thursdays enjoyed particular love among the townspeople: in the evenings classical music was played here, and there were a lot of listeners. And the real pride of the orchestra was the organ.

A tremendous instrument was taken care of as the apple of one's eye.

At the same time, Ernest Antonovich never forgot about beasts. Now they were kept clean and tidy, water supply and sewerage were working in the zoo. In 1887, a well was drilled in the artesian water on the territory of the zoo, and several ponds were built in which goldfish swam. The collection of animals also increased: now visitors could see giraffes, chimpanzees, anteater and other residents of overseas countries. Growth wanted very much that a little Hippo was born in the zoo, because in those years only two zoos managed to do it. But the attempt failed twice: the kids were dying. Then Ernest Antonovich himself went to the London Zoo, consulted with experts, got enough experience - and here in Petersburg a baby-hippopotamus was born!

Growth prudently and intelligently led the zoo and after the death of his wife Sophia, and a total of twenty-four years.

But later in the history of the zoo came a long time of unrest. Managers changed (for the most part they were foreigners), and none of them were really doing things. The zoo was getting poorer, the animals were getting worse. There was even such a fact: at the beginning of the twentieth century, the manager of the baroque von Winkler sent the servants of the zoo to Siberia and gave the task to bring the animals he had already bought. But in fact, it turned out that Winkler had not acquired any animals. Moreover, the money given to them was enough for the journey only to Siberia! The workers who got into a difficult situation were rescued by their wives, who collected the amount necessary for the tickets.

The position of the zoo from the heavy has become deplorable. Many animals were sick with tuberculosis, almost all starved. The lioness has become half paralyzed - a royal gift to the zoo.

And in September, the director of the Moscow Zoo and a veterinarian arrived in St. Petersburg 1910. They decided to immediately buy all the animals, except for the lioness and bison. And the manager was appointed Semyon Nikodimovich Novikov, who until that time served in the zoo as an entrepreneur and struggled, as a rule, contrary to Winkler, fought for the preservation of animals. It was Novikov who called for help from Moscow. And Winkler, by the way, was taken away from the zoo territory by force. 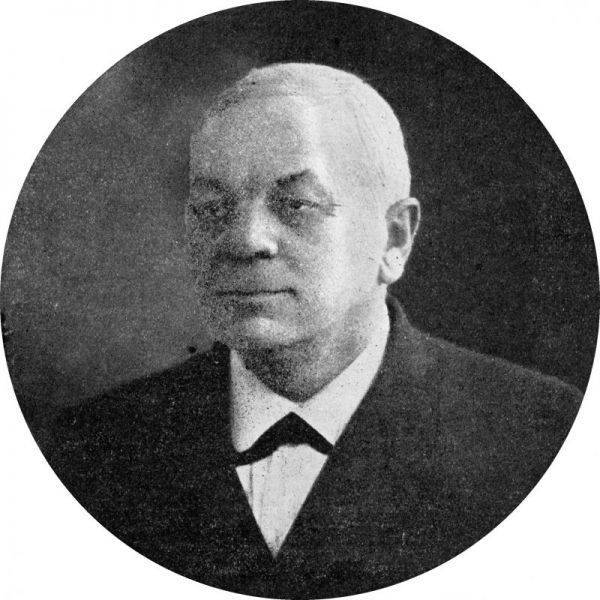 Hard times began to recede, the zoo was completely put in order by the opening of the summer season 1911. New animals settled here: elephants, hippopotamus, rhinoceros and others. And after the revolution, the zoo was handed over to the Office of Petrograd people's affairs. From private, he turned into a state.

It was at this time that the Yunnat circle was opened here, which still works today. The scientific part began to develop, now the zoo staff was engaged not only in keeping, but also in animal breeding. So, it was the Leningrad Zoo that became the first in the world for the breeding of polar bears. And only in ten years - from 1930 to 1940 years - forty cubs were born here! 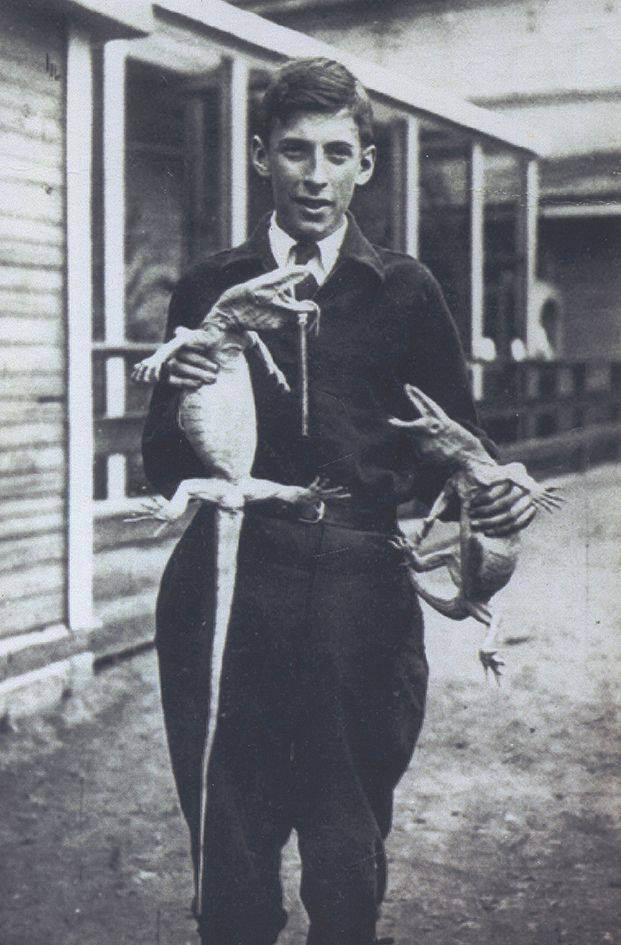 Opened and the site of young. It became clear that we need additional territory. But the Great Patriotic War began ...

The next few years in the history of the zoo can be called the feat of its employees. After all, the zoo practically did not stop its work even in the most difficult conditions of the blockade, it was closed only in the first two terrible winters.

A significant part of the animals (polar bears, rhinoceros, tigers, tapir and others) were evacuated in July 1941 to Kazan. But many animals and birds remained in the city.

8 September 1941, the first day of the blockade, three high-explosive bombs fell on the zoo. Killed the elephant Betty - the favorite of children. Many buildings and workrooms collapsed.

The location of the zoo played a sad role: it was surrounded by military factories, which immediately turned the territory into a “special sight” of the fascists. So, once, after shelling, a buffalo fell to the bottom of the crater. He himself could not get out, tired, exhausted people, too, failed to pull out a heavy animal. Bison spent in the trap about two days. And then the staff built a wooden flooring, spread out on it bunches of hay, lured the beast and thus saved.

Life was harder. Soon the sewage system and water supply system were out of order, the lights were turned off. And then the ministers dismantled the firewood rides in a nearby park. Stoked stoves and warmed animals.

But the most difficult test was, of course, a disaster with food.

Every day vegetables, acorns and rowan trees were harvested in the fields. Under the shelling, hay was harvested, grass was squeezed in sickles in all accessible parts of the city. All the territories that could only, the servants of the park turned into gardens.

Now animals had a new, vegetable diet. But if the issue with the herbivores could somehow be solved, and even bears got used to the stuffing of grass and leaves, the situation with the predators was very bad. Then one of the employees came up with the idea of ​​stuffing old rabbit skins with grass and oil cake, preserved from before the war. They were smeared with the remains of fish oil and thus deceived tigers and birds of prey. True, one golden eagle cunning recognized and flatly refused to write a new one. Zoo staff caught rats for him.

A special story is about the thirty-year-old hippo Beauty. She was the second largest behemoth in the zoos of the world, and ate up to forty pounds of food per day. Of course, now this amount of food could not be obtained. Especially for beauties steamed sawdust - about thirty kilograms. They animal and filled the stomach, and then received 6-7 kilograms of real grass and vegetables.

But remember that water was turned off in Leningrad! But the hippopotamus, whose skin dries up, performs a bloody "sweat" ... 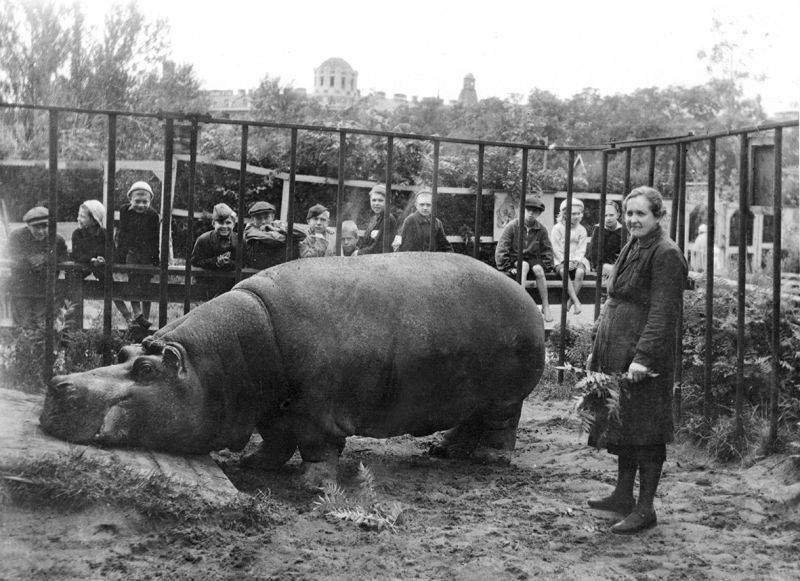 Saved Beauty servant Evdokia Ivanovna Dashina. Every day she brought forty buckets of water from the Neva on a sled! Every day grease hippopotamus skin camphor oil. And during the raids, which the pet was very afraid of, Evdokia Ivanovna lay down on the bottom of the pool and hugged Beauty. And she went out! Hippo lived to 1951 year!

I must say, the townspeople, too, did not stand aside. The exhausted themselves, they helped the zoo with what they could. So, in November 1941, a baby was born in hamadryas. But the mother could not feed him - there was no milk. Then the nearest hospital began to give a little donor milk. And the baby survived.

Visitors came to the zoo every day. Over the summer of 1942, about seven and a half thousand people have been here. But it was very difficult for people to walk ...

Moreover, in 1943, Leningraders themselves replenished the collection of animals at the zoo and even organized an aquarium in which they settled local fish.
Worked and the theater of animals. Here, for the kids, trainers Rayevsky and Rukavichnikov performed with a large group of animals: cubs, dogs, goat, chanterelles. 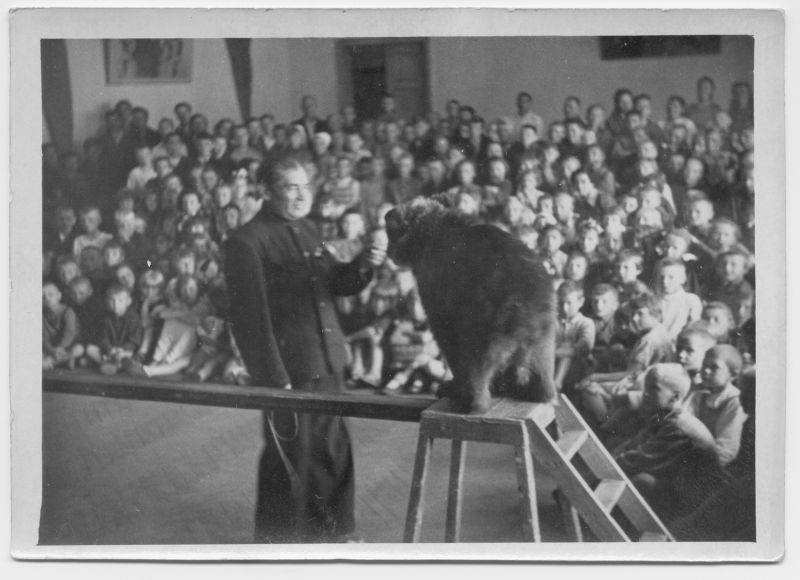 And it must not be forgotten that most of the zoo staff went to the front. Mainly, women and the elderly remained to work here - just about two dozen people who were subsequently awarded the medal “For the Defense of Leningrad”.

In memory of this feat, the zoo today is called Leningradsky. At the central entrance guests are greeted with a memorial tablet. And in the former pavilion for brown bears, miraculously surviving under shelling, the Museum “Zoo in the Year of the Blockade” is now located. 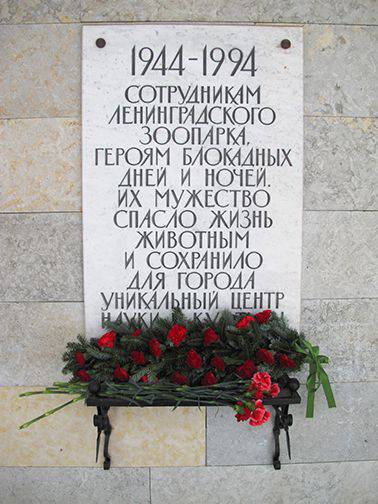 We are in Yandex Zen
Father told
Today 79 would be the first man who flew into space - Yuri Alekseevich Gagarin
7 comments
Information
Dear reader, to leave comments on the publication, you must to register.