October 7 2015
33
Sanctions measures against Russia have caused tremendous damage to the “sanctioners” themselves. According to the Center for Strategic Studies Bow Group (UK), the financial costs of the West from imposing sanctions on the Russian Federation may exceed 755 billions of dollars. Is it a lot or a little? A lot: about the same amount of money the United States spends on the annual military budget, called the "defense". 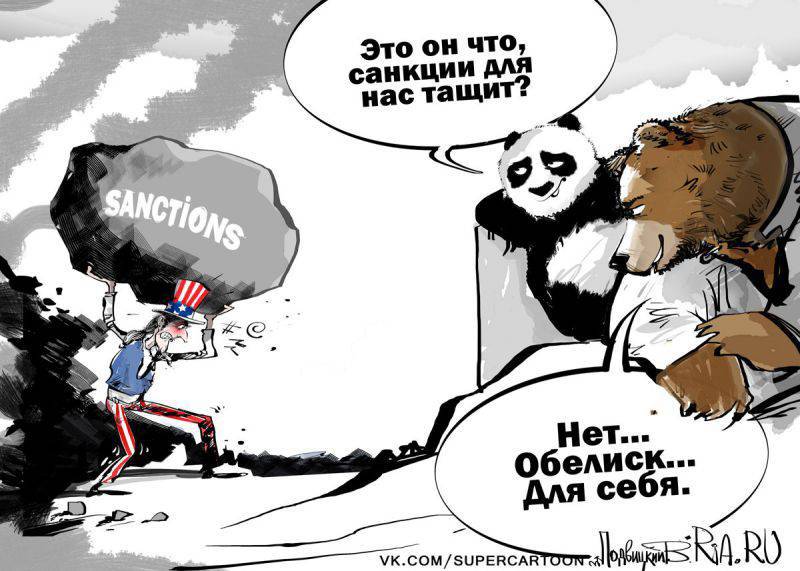 It seems to the analyst that economic sanctions against Russia “hit hard” by their initiators. The UK’s oldest conservative brain trust, Bow Group, has published an article that estimated the loss of Eastern Europe and the Western countries as a whole from sanctions against Russia. The report says that the financial costs of imposing sanctions could exceed $ 755 billion, which is about the same as the annual “defense” budget of the United States.

The document lists on probable losses by country.

The US economy is waiting for losses in the amount of $ 137 billion (trade). The amount includes $ 38 billion in exports and up to 30 billion dollars in US capital frozen by the Russians.

Why it happens? The analyst proposes to seek the answer primarily in oil prices. He considers the oil sector "key".

In September 2014, the Russian oil giant Rosneft and ExxonMobil (USA) announced the discovery of a huge new oil field in the Kara Sea northeast of Murmansk. There are an estimated nine billion barrels of oil there. At current prices, about 43 trillion. dollars (forty three annual income of Australia).

The bosses of "Exxon" barely had time to drink a glass or two, as an unexpected hangover burst out, an observer sneers. The ban on the US government working in conjunction with the Russian Federation forced the company to withdraw its partnership with Rosneft.

Strategic risk consultant and publicist William Engdal believes that the losses of an American company lead to profits for the Russians. For more than two decades, Russian oil companies have dreamed of this oil “fountain”. Finally, the resources of Exxon and Rosneft were involved, and finally production in the Arctic began to unfold. The first - and the most expensive in stories ExxonMobil well cost $ 600 million. And what? According to Engdal, for Rosneft it was very successful that ExxonMobil was forced to leave just after the most difficult and difficult part of the project was completed.

According to the expert, before the Ukrainian crisis, Russia had always tried to limit the participation of foreign shareholders in its state-owned oil and gas companies. What is happening now? And now, ironically, the American strategy for implementation has reached a dead end. Strategists observe the opposite of what they had hoped for in Eurasia. The situation radically changed when Russia began to deepen its energy ties with China.

According to Stephen Kinzer of Brown University, Washington itself pushed the Russians “toward China,” encouraging partnership with sanctions. And this partnership later "can grow into a real threat to American influence." In addition, the partnership of Russia and China can be transformed into a full-fledged military alliance.

Other measures aimed against Russia also returned as a boomerang, according to Rakesh Krishnan Simha.

When the United States ("in collusion with its sidekick friend Saudi Arabia") began to play for a fall in oil prices, they hardly knew that they themselves would fall into the pit they had dug. With oil prices falling below 50 dollars per barrel, the United States has put its own oil sector to serious testing.

Low oil prices have led to cuts in investment across America. By UPI data, 1,5 trillion dollars of investments intended for the exploration of new oil fields and the development of projects are now virtually frozen. Total frozen 40 major projects.

Falling investment has an impact on production. Experts from the Organization of Petroleum Exporting Countries note that in the United States there is a production response to a decline in investment activity. In short, everyone just asserts how quickly US production falls. What will happen? No wonder: America can say goodbye to its plans to be an oil exporter, writes a columnist.

Further, he talks about the "financial harakiri."

Finance - the foundation of the western economic system. Its two main “nerve centers” are in New York and London. The confidence of the world in this system means its stability. But the trouble is: the results of the sanctions are destroying confidence in the well-being of the Western financial system. The capitalists are redirecting financial flows towards Shanghai. It does not take them much time: unlike investments in automobile factories or machine-building enterprises, it is easy to redirect financial flows.

So who really lost? Here is an unexpected winner: the Chinese system "UnionPay", which has previously successfully competed with "Visa" and "MasterCard". The tendency of the West to sanctions, including pressure through payment systems, undoubtedly prompted the Chinese to "redouble their efforts."

Denial of access to Western capital markets undermines their attractiveness to borrowers from other regions, the analyst believes. In India and Iran, in the past affected by Western sanctions, it is likely that in the future they will be very careful with "changeable Western capital."

Well, what about Russia? Russian companies are currently looking for funding in the PRC, the author writes. China, after all, has foreign exchange reserves worth 3,3 trillion. In addition, private Russian companies may borrow from the New Development Bank BRICS, as well as from the Asian Infrastructure Investment Bank established by Beijing.

What Russia is doing in the oil market now might seem illogical. After all, it pumps out even more oil, more supplies to global markets than before. But we must understand that in this way Moscow protects its market share. If the Russians had retreated, it would have been tantamount to suicide: Saudi Arabia would immediately devour their share.

In addition, Russians are looking for and finding alternatives for various products (such as French cheese and Italian olive oil).

And another thing: the fall of the ruble led to a rise in prices for many imported goods and at the same time to the acquisition by Russians of cheap local products. This is useful for the national economy.

Other countries looking with interest at the economic war between the West and Russia can also replace Western goods and services and thereby strengthen their own economy - right along the lines of Russia, while avoiding the diversion of wealth beyond the border.

So what should the affected West do? Maybe stop deepening the hole - otherwise you won't get out of it yourself? However, the author doubts the ability of Americans and Western politicians in general not only to solve problems, but even to understand them.

Rakesh Simha, apparently, right, add on my own. We must also add a few words about perseverance, with which the Americans not only do not revise the policy of sanctions, but even prepare to tighten it.

4 October The Wall Street Journal said that in both Ukraine and Syria, the Obama administration, “not understanding the goals of Putin," allowed a number of "costly failures."

But does Washington change its approach? Hardly, writes edition.

Yes, and the Congress will not "sit back." The introduction of new sanctions against Russia is already being worked out here. These sanctions "US lawmakers will be able to send a powerful signal to Moscow." What kind of signal? The Russians must understand that they are still considered the “aggressors” in Ukraine, and they are also “complicit in the genocide in Syria”. And they will have to pay for this "high price."

Congress may adopt new sanctions that will have a direct and profound impact on the Russian oil refining industry, the magazine said. Russian refineries may be the most vulnerable because their refining capacity is outdated, product quality is low, and infrastructure needs considerable investment. The refining infrastructure is so weak, the newspaper continues, that Russia experienced a shortage of gasoline in the 2011 year, which resulted in a "significant popular discontent." Also, the publication writes that Igor Sechin 15 July sent a letter to Putin warning of a major shortage of petroleum products in 2016-2017. It will arise in the event that the processing sector does not receive financial assistance. Most of the roughly 50 large Russian refineries, like the publication, were created during the Soviet period. In addition, processors require stable supplies of Western equipment, including American.

The current US sanctions, the Wall Street Journal continues, apply only to new Russian oil and gas production projects. However, the US embargo, even one-sided, regarding the export of pumps for refineries, compressors, control equipment and catalysts, "will cause a widespread shortage of petroleum products, will put enormous pressure on the civilian Russian economy and Moscow’s ability to conduct military operations." “Putin’s regime will suffer major political damage,” the publication believes.

True, President Obama can veto sanctions imposed by Congress. In any case, the Congress will “do well” if it “takes out the US policy towards Russia for serious discussion in the election year”.

So, to add in conclusion, the US plan is clear: not to refuse sanctions. True, Obama is not eager to quarrel with Russia (on the contrary, he is ready to negotiate within the framework of the Syrian problem). Apparently, the Russian “question” will become the central point of foreign policy for the next president.

Observed and commented on Oleg Chuvakin
- especially for topwar.ru
Ctrl Enter
Noticed oshЫbku Highlight text and press. Ctrl + Enter
We are
The new world order will be created by the Chinese, Indians and Russians.Strangulation: the context, conduct and consequences of the American naval blockade of China
Military Reviewin Yandex News
Military Reviewin Google News
33 comments
Information
Dear reader, to leave comments on the publication, you must to register.