Country 404. As a "military review" Odessa citizens threatened with courts

October 7 2015
30
Most funny история with a profound ending happened not so long ago. It all started with the fact that a letter from the law firm Dominanta (Odessa, Gogol str., 10, of.1) came to the editorial office of "VO". This respected company is a representative of the medical center "Polinar". And in this regard, we received the following letter:

The photo of the advertising structure placed on your website introduces the deception of the clients and patients of the medical center Polinar, which damages the business reputation of the clinic.

There was also a lot of references to the Constitution of Ukraine, Supreme Court rulings and other legal rubbish. Like the promises of fights in the courts of all instances. This is an abbreviated text.

The first urge was to send Odessa lawyers along a known route. Since the photo was not posted in the article, but in the comments of our readers. And even more so we do not have to observe the Constitution of Ukraine in Russia.

But being people clever and reasonable, we decided to figure out what the essence is. 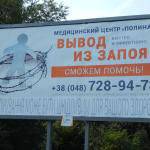 Here is this banner. Nothing special. But someone handled it slightly in Photoshop, placing on the left side a portrait of a man, very similar to President of Ukraine Poroshenko. Well, and if we are to be completely honest, then the photo of Peter Lekseich himself. And the shot is not the best moment. And someone posted it all on Rusvesny, from where this picture came to us.

Having carefully considered, having analyzed the situation, we decided to meet the Odessans. And the pictures placed with us were removed. In order not to really damage the reputation of, perhaps, quite normal medical center.

In general, honesty has always been welcomed. Others would be in the place of "Polinar" would only be glad to have such an advertisement. Wow, Poroshenko himself can withdraw! And here it is not: the inhabitants of Odessa modestly admitted that they did not withdraw. And excessive advertising to them to anything.

We, too, agree with them that it is impossible for the modest Odessa fighters with the “green snake” to bring Mr. Poroshenko out of his usual state. Therefore, we met. And then you never know: let's arrange such an advertisement, and then they will come to them and say - deduce, since this has been posted!

Such “half funny” stories sometimes happen in the world.

Ctrl Enter
Noticed a mistake Highlight text and press. Ctrl + Enter
We are
Why Odessa is not DonbassWhat you didn't want to know about England
30 comments
Information
Dear reader, to leave comments on the publication, you must to register.