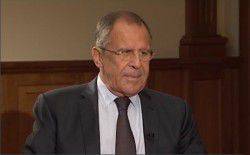 Sergei Lavrov spoke about relations between Moscow and Caracas, and also paid particular attention to current global issues, including the situation in Syria and Ukraine.


Speaking about the fight against international terrorism, the head of the Russian Foreign Ministry pointed out the need to form a united front to counter this threat. This should be done on the basis of the UN Charter, international law, with the participation and consent of all states that are targets of a terrorist threat, the minister said.

“At this stage, the Americans formed their own coalition, they didn’t appeal to any Security Council, they announced that they would bomb the positions of terrorists in Iraq with the consent of Baghdad, and in Syria, if they bombed the terrorists, they don’t need any consent from Damascus. You see, this is a one-sided approach, and it does not even imply any kind of consensus conversation with an eye toward the formation of common approaches and general agreement. ”

The minister noted that the term “humanitarian intervention” was invented some time ago - they say, if human rights are violated, then you can intervene, including with the use of military force. Then they invented the term “responsibility to protect”, meaning that when a humanitarian crisis occurs somewhere, for whatever reason, whether it is natural or due to armed conflict, the world community also has the right to intervene. At one time, a very clear answer was given to all these questions; decisions were taken by the UN General Assembly, which state that it is possible to intervene only with the consent of the UN Security Council.

According to the minister, a situation whereby some agreements are reached with great difficulty, and then one of the parties does not fulfill them, causes great disappointment, and the diplomat considers Ukraine to be an illustrative example.

"In February of this year, all welcomed the Minsk Agreement, approved by the UN Security Council, which demanded immediate steps to start a direct dialogue between Kiev and Donetsk and Lugansk on the preparation of local elections, the same dialogue to ensure the entry into force of the law on special status and reform Constitution of Ukraine in accordance with the principles that were written down in the Minsk agreements with his own hands by the Minister of Foreign Affairs of France and the Chancellor of Germany. Nothing is done. This, of course, is depressing, and suggests how conscientious people were, who, first, agreed to voluntarily subscribe to the text that was agreed upon as a result of the negotiations, and on the other hand, how conscientious people were The Minsk agreements, but in practice - examples of this can be found daily - they are simply trying to support the Ukrainian authorities, who imitate the fulfillment of their obligations and go down to outright lies, explaining to the whole world that they have fulfilled everything until recently her comma. "

As S. Lavrov emphasized, Russia wants to discuss with all UN member countries the possibility of adopting a declaration that would clearly confirm the principle of non-interference in the internal affairs of a state. As well as the principle in force in Latin America and in Africa, which states that countries in which the transfer of power is carried out not by constitutional means, but by a coup d'état, cannot be normal members of the international community. “This idea enjoys quite broad support, but, of course, there is also resistance from those who consider themselves entitled not to necessarily follow their obligations under the Charter of the World Organization,” said S. Lavrov.

Also in an interview with Venezuelan television, he assessed the one-sided extraterritorial sanctions applied by the United States: “Objective trends are such that there is no longer any unipolar world in politics, economics or finance.”

Speaking about relations between Moscow and Caracas, he called them "deep" and "branched." “After becoming president of the country, Hugo Chavez did a lot to make these relations truly strategic, to become relations of strategic partners,” said the head of Russian diplomacy. - It is gratifying that the current President Nicolas Maduro continues this line. We are also committed to the course that was outlined by the presidents of Russia, Vladimir Putin and Venezuela, Hugo Chavez, based on our common vision of the principles of justice and the rule of law. ”

The Minister stressed that on the world stage Russia and Venezuela are allies and call for respect for the norms and principles laid down in the UN Charter, both countries stress the need to rely on "peaceful methods of resolving disputes" and the inadmissibility of the use of force.

Ctrl Enter
Noticed a mistake Highlight text and press. Ctrl + Enter
We are
A great interview with Sergey Lavrov: about Ukraine, Obama and IranRussia: the Moon, Mars and further everywhere ... Speeches of the participants of the Izborsky club in the corporation "Rosobschemash"
14 comments
Ad