Towards a classless society 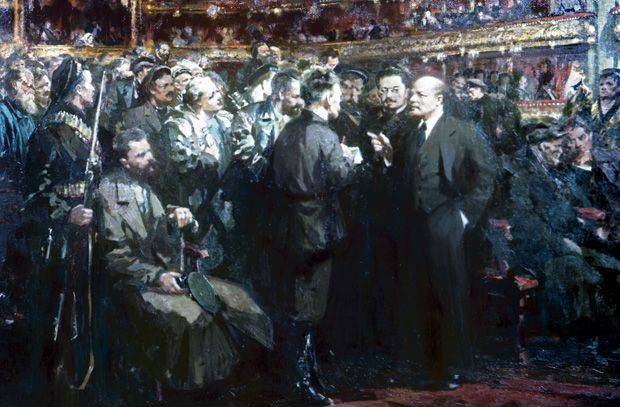 The first Constitution of the RSFSR defined the political structure of the country for two decades.

The main law, adopted by a resolution of the 5th All-Russian Congress of Soviets of Workers, Peasants, Red Army and Cossack Deputies 10 July 1918, defined the principles for the organization of a state that did not know its analogues in the world stories. The constitution was largely based on the first decrees of the Soviet government and the documents adopted by the All-Russian congresses of the Soviets, and this is not accidental - one of the main goals of its adoption was the need to summarize the principles of statehood and the legal system established during the months that passed after the October Revolution. For example, the first of the six sections of the Constitution of the RSFSR actually repeated the “Declaration of the Rights of the Working and Exploited People”, recalling the main task of the victorious revolution: “the destruction of all exploitation of man by man, the complete elimination of the division of society into classes, the ruthless suppression of exploiters, the establishment of the socialist organization of society and the victory socialism in all countries. "

This section did not stint on such formulations: “expressing the uncompromising determination to wrest mankind from the clutches of finance capital and imperialism, which filled the earth with blood in the real most criminal of all wars”; "Insists on a complete break with the barbaric policies of bourgeois civilization, which built the welfare of the exploiters in a few selected nations to enslave hundreds of millions of working people in Asia, in colonies in general and in small countries." The Constitution did not hide the fact that the new state is “doomed” to fight against a hostile environment and is oriented toward a reorganization of the whole world. That is why the creators of the document deliberately broke with many traditions of European law, for example, with the principle of separation of powers.

However, the first Soviet Constitution still set itself more specific goals: it had to determine the structure of power in the new state.

State of the dictatorship of the proletariat

The Constitution established the appearance on the map of a new country - the Russian Soviet Republic, which was established on the basis of a “free union of free nations” in the form of a federation of Soviet national republics. The constitution declared Russia a republic of Workers ', Soldiers' and Peasants 'Deputies' Soviets - it was the Soviets who should have owned all the power in the center and in the provinces. Congresses were required to convene at least twice a year.

The constitution called the state of the proletarian dictatorship, which was to serve the interests of only the working population, was the main tool for achieving the ultimate goal of building socialism, in which there would be no division into classes or state power. All the others were deprived of political rights: “now, at the time of a decisive struggle of the proletariat with its exploiters, the exploiters can not be in any of the organs of power,” the authors of the Constitution reminded. At the same time, the Constitution provided workers with a number of political advantages over other classes, even over the peasantry. So, city councils sent more deputies than rural ones. The constitution dissolved the permanent provincial councils, replacing them with congresses, but kept the lower level councils - city and workers - retained, made them permanent bodies and at the same time provided for frequent rotation of personnel within them: council members were elected for 3 month and could be withdrawn voters for any wrongdoing.

Thus, the electoral scheme in the new state meant a departure from the gains of the February Revolution (by the way, the electoral law adopted after its victory was the most democratic in the world): the new elections were neither universal, nor equal, nor even direct, because the All-Russian Congress was elected by city councils and provincial council congresses. The principle of the election to the councils was production-territorial: the workers elected deputies from factories and plants, and the rest of the urban population and peasants elected deputies at their place of residence. 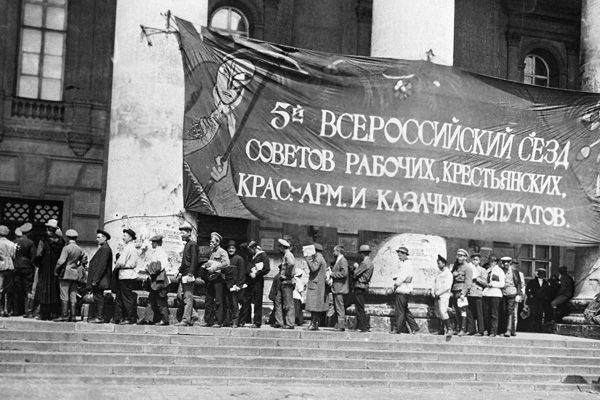 The delegates of the 5th All-Russian Congress of Soviets are standing in front of the entrance to the Bolshoi Theater. Photo: RIA News
According to the Constitution, the government controlled the activities of 17 of individual commissariats: foreign, military, maritime and internal affairs, justice, labor, social security, education, post and telegraph, nationality, financial affairs, communications, agriculture, commerce, industry, food, state control, health care, as well as the High Council of the National Economy - the body engaged in planning in the economy. People's Commissar possessed enormous power, he could single-handedly make decisions on any issues in his area of ​​government. Only the board formed at each commissariat and under the chairmanship of the commissioner himself could limit his actions. In case of disagreement with his decisions, the board could complain about him to the Council of People's Commissars or to the presidium of the Central Executive Committee.

The main law established labor as the duty of all citizens of the republic, proclaiming the somewhat sloping slogan borrowed from the Bible: “Do not eat and not eat!” And it’s not surprising that the Constitution of the first proletarian state in the world provided a lot of advantages to the “working class and peasant poor”: She passed into their hands all the technical and material resources for the publication of newspapers, brochures, books and any other printed materials, ensuring its free distribution throughout the country. In order for proletarians to freely organize meetings, rallies and processions, they were provided with all premises suitable for organizing people's meetings “with furnishings, lighting and heating.” The constitution declared the determination of the Soviet government to give the proletarians a complete, comprehensive and free education.

For the first time in the history of the country, the Constitution introduced universal military service. True, “the honorable right to defend the revolution with weapons in the hands ”was granted only to the working people: the Soviet authorities did not trust those who did not belong to the proletariat so much to give them a weapon. They were supposed to help the country's defense with "other military duties" like digging trenches. The constitution also separated the church from the state, but, curiously, kept full freedom for citizens, both anti-religious and religious propaganda.

The first Soviet Basic Law contained several norms that seem surprising even now, as they broke with the generally accepted tradition of state-building. Thus, putting at the center of the solidarity of the working people of all nations, the RSFSR granted to foreigners living on its territory all the same political rights that its citizens had. Moreover, the country guaranteed the right of asylum to all foreigners who are being prosecuted for political and religious crimes (even now the laws of the states stipulate this rule with great care).

We are in Yandex Zen
Cossacks in the Civil War. Part I. 1918 year. The origin of the white movement
Cossacks and the October Revolution
7 comments
Information
Dear reader, to leave comments on the publication, you must to register.