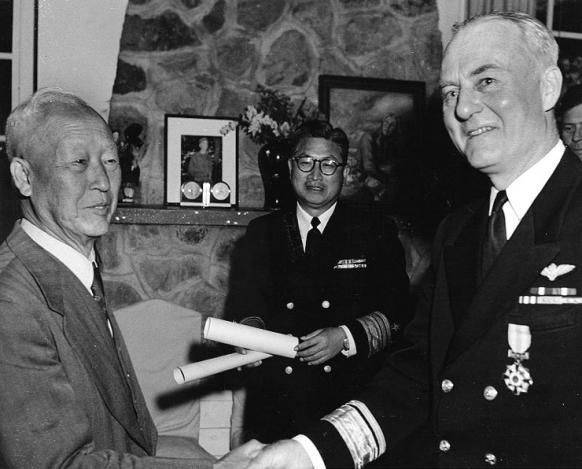 Another article from the cycle dedicated to stories coups, we dedicate to South Korea

15 March 1960 was held in South Korea for the presidential election. Only one person applied for the highest post in the country: the current head of state, Seung Man, who had already become president of the country three times.

I must say that once Lee Seung Man enjoyed the sincere support of the population. In his youth, he participated in the anti-Japanese movement, he was imprisoned for this, when he was released, he again joined the struggle for Korean independence and looked like a hero to the eyes of the people. The United States made a bet on Lee Seung Man and helped him rise to the top of his power, but in the field of economics Lee Seung Man did not succeed. After the Korean War, the country was in utter devastation, and it was impossible to effectively organize the restoration.

And in a political sense, South Korea became a de facto protectorate of the United States, and in economic terms it depended heavily on American aid. Time passed, and the situation did not fundamentally change, poverty reigned in South Korea, little was left of the former support of the electorate, but the aged Lee Seung Man stubbornly held on to power. On top of that, he abolished the provision of the Constitution, which forbade being in power for more than three consecutive terms.

As noted in the literature, the 1960 election of the year has become a real profanation. Not only did they go on an unopposed basis, because the very ways in which Li Seung Man intended to achieve victory had little to do with democracy. The results were falsified, the population was intimidated, the opposition observers were not allowed into the polling stations. On election day, a protest rally was held against fraud, which resulted in large-scale clashes with the police. People threw stones at the guards, they answered with bullets, and managed to suppress the protest.

On March 17, the results of the vote were made public - as expected, Lee Seung Man, who gained the overwhelming majority of votes, again became president. It seems that everything has settled down, but after almost a month the disfigured corpse of one of the participants of the opposition rally was found. A tear gas grenade was found in his eye, and this led to an outburst of outrage among the public, who immediately blamed the police, that is, the regime of Seung Mang.

A strange thing: during the police clashes, several people died, but this did not lead to increased mass protests, and then after a long time, a corpse was suddenly found, without any investigation, the “guilty murder” was announced, and the new one immediately began much more powerful wave of protests of the population.

18 April in Seoul, the students gathered on the square in front of the National Assembly (parliament). The authorities didn’t put obstacles in their way, and after they had called, the students began to return to their campuses, and suddenly several dozens of unknown persons armed with chains and hammers attacked their columns. The battle began, one person died. After that, a crowd of one hundred thousand people took to the streets of Seoul.

As usual, Maidan activists demanded a meeting with the president. They did not talk to them, and the police undertook to disperse the rally, but this only angered the demonstrators. We will note that not in Seoul alone, but in a whole number of Korean cities, meetings and violent clashes with law enforcement officers took place. The death toll has reached nearly two hundred people.

25 April, a professorship came out on the streets of Seoul, demanding an investigation into the death of people and putting forward the slogan of revising the election results. Other residents of the capital joined the university professors. 26 April, the parliament demanded the resignation of the president, and then Lee Seung Man discovered that the police and the army were getting out of his control. His orders were simply ignored.

The US ambassador to South Korea officially condemned the regime of Seung Man’s regime, and on 27 on April, the foreign minister declared himself the country's leader (presumably with the consent of the US embassy). And the right hand of Lee Seung Man, Vice-President Lee Gibun and his family "committed suicide." As I understand it, he was greatly helped to go to the next world, and not only to him, but also to the members of the household. And it was done by those who thus sent the president an unambiguous black mark. Lee Seung Man is not a fool, and immediately realized that he had to save himself while he was alive. The Americans took him out of the country, and the last years of his life the former president spent in the Hawaiian Islands.

On July 29, parliamentary elections were held, in which, of course, the opposition won. According to the amended legislation, the parliamentarians elected the president, and the opposition leader Yong Bo Son became the head of state. As you may have guessed, South Korea’s dependence on the United States has increased dramatically. Already at the beginning of 1961, an agreement was concluded between Seoul and Washington, which legally established the possibility of Americans interfering in the affairs of Korea, which not only de facto but already de jure turned into an American colony.

As well-known Korean historian Sergey Kurbanov noted, at the end of the reign of Lee Seung Man, among the senior officers, a group was formed, which took over to prepare a coup. Among them were Major General of the Ground Forces Pak Chung Hee, Major General of the Marine Corps Kim Donh, Brigadier General Yoon Thael, Major General Lee Zhuil and Lieutenant Colonel Kim Jong Phil.

It is believed that the April mass demonstrations that led to the fall of the regime took them by surprise and confused all the cards. The military would like to come to power themselves, and here the rally activity and the US intervention led to the presidency is not the one they expected. This is not excluded, but I would associate the moment when the army got out of control with Seung Man’s sabotage by these individuals.

Be that as it may, the military did not abandon their goals. Interestingly, in the short period of liberalization of the regime in the south, a political movement emerged for socialism, a planned economy, and peaceful reunification with the DPRK. All this of course did not suit the Americans, did not suit them, and the fact that South Korea hung like a stone on the US budget, and demanded more and more financial investments. In America, they realized that it was necessary to change the concept. Let the Koreans themselves earn a decent life, then the sympathy for North Korea will decrease.

On the night of May 16, the “Military Revolution” began. The putsch troops approached the capital. Then everything follows the classical scheme: the buildings of key authorities, the main post office, publishing houses and radio stations are captured. In such cases, every second is expensive, and the military tried as soon as possible to appeal to the people with a statement. Early in the morning, Koreans were informed that power was in the hands of the military. It is clear that the coup put up themselves in the form of the saviors of the nation, and the government was classified as helpless and worthless.

The junta declared its main objective to create a strong housekeeper and fight against communism. Moreover, one was tied up with another, explaining that only a developed economy would allow giving a worthy answer to the challenge of the North. At the same time, the military lied that they would soon transfer power to the civilian military. Type will drive a little, will bring order, will achieve prosperity and will give control levers to any strangers.

The existing regime surrendered immediately, which is not surprising, because he had no forces to resist the junta. The Americans did not defend "democracy", and for the sake of appearing, having slightly fought the Korean military for arbitrariness, they quickly recognized them as the new government. So in Korea a long period of dictatorship began.

October 26 1979 year Pak Jong Hee was shot dead by Kim Jae Kyu, director of the South Korean Central Intelligence Agency. Some experts see this as a coup attempt. The new president was Choi Gyu Ha, who announced a course towards democratization of the country, but he had the opportunity to rule for a short time. 12 December 1979 was followed by a new coup, led by General Jong Doo-hwan.

On December 13, parts loyal to him seized the Ministry of Defense and key media, after which Chung Doo-hwan concentrated in his hands real power, taking the post of head of the National Intelligence Agency, although Choi Hyu Ha remained the formal head of state.

The new government immediately faced an opposition-minded pro-democratic movement. Mass demonstrations and student riots began, the peak of which went down in history as an uprising in Gwangju, and the events themselves were called the Seoul spring. Chun Doo-hwan declared martial law and with the help of army units and aviation suppressed all unrest.

In August 1980, decorative president Choi Gyu Ha resigned, new elections were held with the only candidate. Guess how? All right, it was Jong Doo-hwan, who, as expected, won and remained in the presidential dictatorial position until the end of February 1988.

Ctrl Enter
Noticed a mistake Highlight text and press. Ctrl + Enter
We are
War in Korea: before and afterSixty Years Since the Beginning of the Korean War
2 comments
Information
Dear reader, to leave comments on the publication, you must to register.