October 10 2015
26
In Tula, honored the memory of the legendary designer weapons Vasily Petrovich Gryazev. At the Tula State University after the rally and laying flowers to its bas-relief, an All-Russian scientific-practical conference and shooting competitions with airguns were held.
Among the topics discussed at the conference are the theoretical and practical heritage of the Hero of Socialist Labor, laureate of State Prizes and Prizes of the Government of the Russian Federation, Academician of RARAN, Doctor of Technical Sciences, Professor Vasily Gryazev. For more than thirty years he led the rifle-cannon direction in the Tula Instrument Design Bureau. His products in aviation - These are single-barrel, double-barreled and six-barreled guns of various calibres for arming various types of aircraft and helicopters, as well as a four-barreled machine gun for helicopters. On the navy are its six-barreled anti-aircraft guns for naval anti-aircraft gun mounts and the Kashtan anti-aircraft missile and gun complex. For the ground forces, he developed a double-barreled anti-aircraft machine gun for the Tunguska air defense system and single-barreled guns for arming BMPs, BMDs, armored personnel carriers, as well as his designs are located on the S-1 Shell, and it was not without reason that he was called the patriarch of high-fire weapons at the enterprise.


History Vasily Gryazev, the creator of the world's highest-rate cannon, told me in one of his recent interviews.

Tula from the working-class family, he graduated from 1951 in the year of the weapons and machine-gun department of the Tula Mechanical Institute.

“With this knowledge in the field of weapons and machine guns, I was sent to the Podolsk Institute, then it was called the Research Institute for Small Arms,” said Vasily Petrovich. There he first met the future academician and scientific director of the Tula Instrument Design Bureau, Arkady Shipunov, who graduated from the same institute a year earlier. Two brilliant designers of weapons met, then to never part. According to Vasily Gryazev, their "aspirations to work as designers in creating aircraft gun armament" coincided.

At that time, the whole world competed in achieving the highest rate of fire. The speeds of the aircraft grew, the time of combat interaction between them was sharply reduced, so in a short time it was necessary to release as much ammunition as possible. From the designers of weapons required a significant increase in the rate of fire.

“And we, with the excitement of youth, joined in this global competition,” remembered Vasily Petrovich. “Although we were still novice specialists then, I would say that we had enough sound thoughts.” We analyzed the previous path of development of aircraft armament mainly on one characteristic - the rate of fire. And they considered that everything that was done before was done inefficiently. Because each new system was put into service, having advantages in rate of fire over its predecessors on 15, a maximum of 25 percent. We considered that this is a scanty figure and threatened to increase the rate of fire two to three times.

After several unsuccessful attempts in 1958, they finally developed a double-barreled automation scheme, which in the caliber of 23-s and 30-mm of millimeters showed a rate of fifty shots per second. Thus, their gun three times surpassed the performance of all analogues available at that time. After the first success, designers faced a dilemma: dwell on this achievement and develop the theme for different applications, as most of their colleagues do (when successful development appears in any direction, they become locked in it, trying to spread the idea to everything else), or develop farther. They preferred the second path - “due to the great greed to work”, they decided not to stop there, and once again try to triple the rate of fire.

- Try saying "22" is a second. And imagine: while you said it, 170 shells are already gone, - explained what the rate of fire, Vasily Petrovich. But it was ahead, and then, in parallel with the work on fine-tuning their first gun, they began to develop a six-barreled gun.

And there was nobody to tear off

“But we faced almost insurmountable difficulties,” the designer recalled. - The fact is that any development in any field relies on previous achievements, and often many decisions that have been made earlier are used in promising developments. For example, in aviation it is believed that if a new aircraft does not contain fifty percent of previously developed parts, it will not fly. In some way, a new sample must necessarily be connected with previous ones in many, many nodes. And in the direction of the six-bar automation scheme we had no predecessors. There is no one to spy, borrow. In addition to the American six-barrel Gatling and the Russian bullpen Baranovsky there was nothing. But those systems were manual - the man twisted the gun by hand and she fired, naturally, very rarely and with a very small rate of fire. In principle, if you turn faster, they could give a high rate of fire. But how to do it - we could not find a single solution.

The work of domestic designers, who were engaged in the development of such multi-barreled weapons using an electric motor, ended in failure. At the same time, there was scant information from the United States that the American company General Electric was developing a 20 six-millimeter six-barreled cannon "at a fantastically high rate."

- Of course, many years later, when she appeared in service with American aircraft, this information reached us to the full. But even if we recognized them at that time — and it was 1958 a year, we would still not be able to apply them. That gun worked on an electric motor with a power of 25 kilowatts. The Americans could afford it - apparently, they were compliant aircraft designers. And, having become acquainted with ours, we knew for sure: if we would have offered such a solution, our aviation would simply drive us out. After all, such energy on an airplane should be obtained somewhere. The aircraft designers told us: behold, gentlemen, an onboard station with direct current in 24 volts and "not a single gram" more. So we had to create a system that does not work on the basis of an external source (hydro or electric drive), but somehow contrived to use our own internal energy shot to make this gun work. Such a thing we did. We invented a vapor engine for a six-bar automation scheme with continuous action. He worked like an internal combustion engine - he took a portion of the powder gas from the barrels when fired. At the same time, we made a good drive: if the gun shoots, it rotates and reloads, as soon as it finishes shooting, everything stops. However, we could only start shooting with our hands. But on the plane, no one will approach the gun - it is located the devil knows where, and you still need to get to it. So all this control had to be done remotely ...

In the end, they did it all. In general, such samples in a limited time is very difficult, almost impossible. Americans, for example, 20-millimeter cannon "Vulkan" made 12 years. And Tula designers engaged in this direction from 1958-th to 1961, when, finally, the necessary technical solution was found. Soon the aircraft ordered them a 23-millimeter six-barrel cannon, and the Navy for the defense of ships - 30-millimeter.

- You know, when she shoots at a frequency of 170 shots per second, it seems like an animal howl. The target has already been destroyed, there are clouds of smoke, the gun has already stopped. But 150 shells that have already been fired are still flying to the pre-empt point and eagerly looking for a target. The picture, - as Vasily Petrovich described the first test of his gun in the sea.

The general was dancing a jig

When industrial armaments were tested, General Yermolov, as Gryazev said, danced on the jig deck with joy. According to him, these guns can be compared only with the American "Vulcan" - there are no other analogues. But our rate of fire and more energy intensity - do not compare.

“She drank a lot of blood, was created in smoke and flame,” the designer recalled. Between the first "shooting device" and the mass-produced product were 100 prototypes with various changes and corrections of deficiencies, a million warheads and 15 years of work. After all, in the same aviation there should be no delays in shooting. This is possible in the Kalashnikov assault rifle, but not in the air cannons. If during the tests the sample did everything, but there was a hitch at the last shot - it is considered that the gun did not stand the test, the production of guns stops, the task is given to find the reasons. Everything needs to be refined and after that another 2 “penalty” sample to be tested. But in the end it turned out the most rapid-fire weapons in the world.

In 1974, the gun was adopted for aviation, and a year later - for the Navy. Now, on any snapshot of warships, you can see these guns. For example, the flagship "Peter the Great" is equipped with six-barrel cannons, the total rate of which firing is 200 shots per second. They are designed for self-defense of ships against anti-ship missiles - shoot them in the air. And in aviation, the 23-millimeter cannon completed the armament of the heavy attack aircraft of the Sukhoi design.

- If you go to the Mig 29 on the left, you can stroke the barrel of our gun, and in the SU-27 it stands on the right, in the MI-24 helicopter P on the side you will see the 3-barrel 30-mm gun, invisibly there everywhere. The gun is a component. No one will buy a gun to shoot from her shoulder, ”said Gryazev. - Always the automatic machine for the shooter is a complete product, and an aviation cannon only for an aircraft can only be sold together with an aircraft. Not insulting - cheaper. The main thing for us was to preserve our honor, to say that we were entrusted with such responsible work, and we did it. And the fact that it is a component or not - was not in our thoughts. 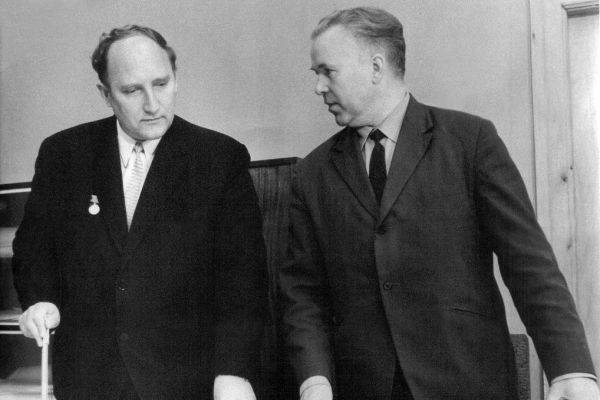 Ctrl Enter
Noticed oshЫbku Highlight text and press. Ctrl + Enter
We are
Our memory. The power and greatness of the locomotiveConstellation of fading stars
Military Reviewin Yandex News
Military Reviewin Google News
26 comments
Information
Dear reader, to leave comments on the publication, you must sign in.