All military experts analyzing the actions of our pilots in Syria agree: this air operation has been planned to the smallest detail, based on repeatedly confirmed intelligence data, including from the space satellites of the Russian Defense Ministry, and is well thought out from the point of view of using ISIS terrorist bases of specific types of Russian combat aircraft.

This fact is also in favor of this. Before the official announcement of the air operation in Syria about our presence there aviation practically no one knew the group. Yes, in the Western media there were reports of some kind of equipment in the area of ​​the Syrian port of Latakia. But to confirm that it was the planes of the Aerospace Forces of the Russian Federation, and not about the winged vehicles delivered to Assad under contracts as part of military-technical cooperation, no one could. The transfer of our air group really happened quickly, and most importantly - secretly from the leaders of ISIS.

But in Syria, we have transported not only people and airplanes, but also communications equipment and airfield support, without which it is impossible to organize flights. And still - ammunition, fuels and lubricants, everything necessary for the normal functioning of the air group. And even the drones, which, with the start of the operation in real time, track the movements of militants and transmit pictures of strikes against them. Moreover, these same pictures appear not only on the screens of our officers' officers in Syria, but are also broadcast on the monitors of the National Defense Control Center of the Russian Federation.

As soon as the air operation began, some media outlets "broke out" with the news that the defense ministry sent Russian conscripts to the civil war in Syria. To put it mildly, there were two inaccuracies in such messages. First of all, our military does not take any part in the civil war. The main objective of the air operation is the destruction of the militants of an international organization that is almost universally recognized as terrorist. It causes death not only to residents of the states of the Middle East, but also tries to take control of the Asian region, i.e. threatens Russia and our allies in the CSTO.

As for the recruits, it is naive to think that in the million-strong army of Russia there were no professional soldiers to carry out a responsible and rather dangerous operation in Syria. Moreover, all pilots, aviation engineers and technicians, as well as practically all airfield telecom operators and logistics personnel in our Armed Forces are professionals. Therefore, the General Staff and claim: the likelihood of sending to the Middle East, the soldier conscripts were not even discussed.

But with the choice of technology for the Syrian mission, the generals, apparently, decided not immediately. According to the classical scheme, in a large air operation, as a rule, different types of aircraft are used - reconnaissance aircraft, fighters, attack aircraft, bombers. If necessary, long-range aviation is also raised to the sky - in particular, the Tu-22М3.

Experts say that in Syria, such a diversity of combat aircraft is not required. The igilovtsevs do not have their own aircraft, so our fighters like the Su-27 or MiG-29 have nothing to do there. Functions targets scout can take on drones. Su-25 attack planes and Su-24M attack bombers are excellent for launching rocket-bombing attacks on terrorists. The Tigr PNS-24М Tiger, installed on the last sighting and navigation system, allows the pilot to descend to the height of 50 meters and automatically skirt the terrain. It is not easy to shoot down this aircraft, especially since it can drop bombs and launch missiles many kilometers before the target.

Even more versatile is the newest Su-34 bomber. It is more correct to call it a multifunctional airline complex. Depending on the task, this machine works both as a fighter and as a scout and, of course, as a strike complex. And Su-34 can go up to 11 thousands of meters, and its pilots, in fact, do not feel overload. What allows them most of the route does not use an oxygen mask.

New "drying" is equipped with a powerful complex of on-board electronic equipment with a multiplex information exchange channel. Multifunctional radar and electronic countermeasures equipment increases the survivability of the aircraft. Su-34 can be refueled in the air, mounted on the external sling of additional fuel tanks, so the range of its flight is in fact not limited.

And one more important detail. Su-34 is able to use satellite-corrected ammunition, which is especially important for the destruction of small-sized targets, for example, a jeep, on which terrorists have installed a light gun or anti-aircraft gun of the ZU-23-2 type. Generally from the impact of this machine is difficult to hide.

But even this does not exhaust the efficiency of the new aircraft. His "smart" rockets and bombs guarantee the destruction of the bunkers hidden underground. A concrete bomb bomb BETAB-34 dumped near the town of Rakka with the Su-500 accurately covered the protected IG command post, as well as an underground bunker with a warehouse of explosives and ammunition.

About another high-precision munitions - X-29L guided missile, used in Syria by the Su-34 and Su-24 pilots, said the representative of the Air Force of the Space Igor Klimov. “The air-to-surface missile X-29L possesses a laser homing head. When a launch occurs, the pilot illuminates the target with a laser sight, while the aircraft can continue to maneuver,” he explained. And he added that such a rocket is capable of hitting targets with an accuracy of plus or minus two meters. At the same time, it has a half-ton warhead with increased damaging factors of high-explosive and fragmentation action. 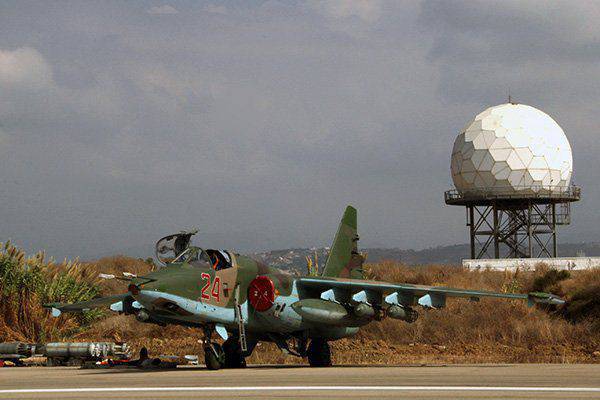 Ctrl Enter
Noticed a mistake Highlight text and press. Ctrl + Enter
We are
Weather forecast for the fight. Space, meteorology and war in the XXI centuryAbout Stalin and Khrushchev
33 comments
Information
Dear reader, to leave comments on the publication, you must to register.