In the Syrian kink lies the danger of the destruction of an entire region of the planet.

October 7 2015
10
Through the efforts of Russia, which launched an operation of its aerospace forces in Syria against the terrorist group "Islamic State", this bleeding Middle Eastern country literally in a matter of days turned from the old painful point of the planet to the main item on the international agenda. Many leading politicians and diplomats made public statements about her. Some, like, for example, British Foreign Secretary Philip Hammond, were in such a hurry to be noted in the trend that they made hasty mistakes. In an interview with Reuters, Hammond first proposed to keep Syrian President Bashar al-Assad in power for a transitional period of up to three years, and then he had to correct the already published text, specifying that the head of Syria could remain in power for “three days, three weeks, three months or more to complete the conflict. ” 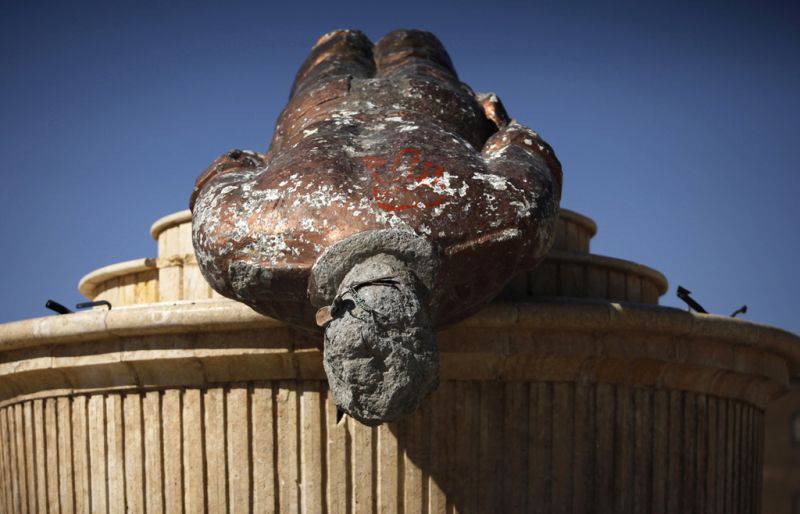 Bashar al-Assad himself on these days, in an interview with Iranian television channel Khabar TV, said that he was not holding up his post and considered the resolution of the conflict in the country to be his main concern. "If my resignation will help in resolving the Syrian conflict, I will immediately do it," the official Twitter office of the Syrian president quoted as saying an interview with Assad. The coalition of Russia, Syria, Iran and Iraq must succeed in the fight against terrorism, otherwise it will lead to the fatal consequences of the entire region. It can be destroyed. This bleak prospect was painted by Bashar Asad in an interview with Iranian television journalists.

Visitors to the Syrian leader met on October 3-4 in Astana. This is the second conference of the moderate Syrian opposition to resolve the crisis, which is being held this year in the Kazakh capital. (The first round of the meeting of representatives of the opposition was held in Astana on 25-27 in May. Then, in the final document, its participants called for the withdrawal of all foreign fighters from the country). It should be noted that the promise of the moderators of the October conference to include in the agreed declaration a call for the fighters of the armed Syrian opposition to put down weapon, not included in the agreed text. Not in the declaration and evaluation of the operation of the Airborne Forces of the Russian Federation in Syria against the terrorist group "Islamic State".

The final document of the conference consists of six points and, according to the participants of the meeting, “is of a pacifist character,” since its main message is the need for a peaceful settlement of the crisis. The opposition called for reforming the army and security structures, holding parliamentary elections scheduled for 2016 a year under international supervision and guaranteeing the security of all candidates, for decentralizing Syria as a condition for maintaining its statehood.

After the meeting, which was held behind closed doors, Bassam Bitar, a spokesman for the movements of Syrian Christians for Democracy and Pluralist Group, told reporters that the 29 man from 37 had signed the declaration. That is, there is no consensus yet, but the mood for a peaceful resolution of the conflict was clearly indicated.

This conflict, which has been the victim (according to the UN) over 220 thousands of people, has been going on since March 2011. The first anti-government demonstrations in Syria began on January 26 of 2011, and were mostly spontaneous in nature, until they turned into mass protests that broke out in the southern Syrian city of Der'a. The cause of the unrest, which resulted in a full-scale uprising, was the arrest of a group of schoolchildren who wrote anti-government slogans on houses and fences on March 18. These were the echoes of the “Arab Spring” in Tunisia and Egypt.

Further, the protests developed according to the well-known scenario of “color revolutions”. On March 20, a crowd of demonstrators burned down the office of the ruling Ba'ath Party, the Palace of Justice and several police stations and destroyed the offices of a telecommunications company. The next day, the first blood was shed. Armed demonstrators killed the crew of the ambulance - the driver, doctor and lifeguard. Security forces shot back five rioters with return fire. The situation soon turned into a full-scale popular uprising. Demonstrators demanded the resignation of President Bashar al-Assad and his government.

The crisis began to gain momentum. A year later, he was officially recognized as a civil war. The first such assessment will give 13 June 2012, the UN Deputy Secretary General for Peacekeeping Operations Herve Ladsu. The next day, the International Committee of the Red Cross recognizes this.

Estimates will adjust by the end of the year. In December, 2012, in a special UN report, describes the war as "an openly religious conflict between the Alawite militia and its Shiite allies, fighting mostly against the predominantly Sunni rebel groups." The parties to the conflict will challenge this wording, but subsequent events, when the militants of the extremist groups Islamic State and Dzhebhat al-Nusra will support the Sunni insurgents, will make the UN estimates quite realistic.

However, from the very beginning of the crisis, from the first anti-government speeches in Der'a, the radical Islamists, the Salafis and members of the Muslim Brotherhood, banned in Syria, set the tone. The main center of protest was the city mosque of al-Omari. Her imam - Sheikh Ahmad al-Sayasin - was, in fact, the organizer of the unrest. He even kept in the mosque weapons and ammunition, which then armed the rebels.

It was a rebellion not so much against Bashar al-Assad, as against the Syrian ruling Alawite clan. Over the decades of his leadership, many have not recognized the unconditional right of the Alawites to rule the country. There are reasons for this.

The Syrian Arab kingdom with its center in Damascus was founded on fragments of the Ottoman Empire in 1920. In the state dominated by the Sunnis. There also lived significant communities of Shiites, Ismailis, Christians of different directions and Alawites. The latter were - hardly a fifth of the population. Basically - the peasant poor, servants in rich houses, small artisans.

For half a century the country was in a fever: it passed from hand to hand with the occupiers (France, Germany), experienced a series of military coups, unification with Egypt into the United Arab Republic and the subsequent delimitation. Then - again coup for coup. In the end, in 1970, as a result of one of them, Defense Minister Hafez Asad, the parent of the current Syrian president, came to power.

Hafez Asad was from a poor Alawite peasant family that lived in the small village of Kardaha, near the port city of Lattakia. However, he made a very decent career, and after the seizure of power, he surrounded himself with Alawite, entrusting the most important government posts to representatives of this minority. This is not to say that Syria has come to terms with this.

There were protests, mass protests. In February 1982, the Muslim Brotherhood organization even raised an Islamic revolt in the city of Hama. Senior Assad dealt with him extremely cruelly. Government forces subjected the city to massive bombardment using multiple launch rocket systems. The old ones were destroyed historical neighborhoods of Hama. Then they took him by storm. According to various estimates, up to 40 people died in the city. The people reconciled, but hardly forgotten this "black February". Perhaps, he broke that break of the Syrian nation, which led to new bloody events in the new century.

As we can see, from the official assessments of the UN, the protagonists of the new confrontation are the same - the Alawites (including the militia) and their Shiite allies are fighting with the predominantly Sunni groups originally represented by the "Muslim Brotherhood." Now the initiative has been seized by Islamic terrorists, whose goals extend far beyond Syria. It is not by chance that al-Asad regards them as a danger to the entire region, and the opposition is already inclined to “pacifism”, seeing that the further escalation of the conflict is a direct threat to the statehood of Syria.

Understood in the West. Earlier, US President Barack Obama said that with the departure of Assad, the conflict in Syria will resolve "by itself", but today it has come to the realization that the continuation of the struggle against the Bashar Assad regime puts Western states in the position of allies of terrorists who roamed Syria, or even their supporters. The tone of Western diplomacy has changed dramatically, and Russia essentially received a blank check on actions against the extremist groups "Islamic State" and "Dzhebhat an-Nusra."

Last Friday, by inertia rather than in an effort to achieve a real result, the seven states opposing Assad - France, Germany, Qatar, Saudi Arabia, Turkey, the United Kingdom and the United States - in a joint statement of the governments called on Russia to stop attacks on the Syrian opposition. However, this document has become quite conditional, more designed to meet the demands of the internal opposition. What does the fact that the statement of seven circulated by the Turkish Foreign Ministry, and not the State Department of the United States - the leader of the Western coalition?

Russia without any consequences continued the operation of its Aerospace Forces against terrorist groups operating in Syria. This enthusiastically accepted the local population, exhausted by the civil war. Here's how the Channel Editor wrote about it in English The Guardian News Channel 4 News Lindsey Hills. According to the journalist, Syrian citizens located in the territories controlled by the authorities perceive the Russian military as saviors and heroes. In his article, Lindsay Hillsam cites the mayor of the Syrian city of Tartus, who believes that “the Russians are determined to defeat the terrorists, while the Americans and their coalition seem to have no such intention. They fought terrorism last year, but the Islamic State has only strengthened, not weakened, so we believe their coalition has no serious intentions. ”

Perk and fighters of pro-government forces. Last Friday, for example, they fought off the assault on a military airfield at Deir-ez-Zor and inflicted a serious defeat on the terrorists who attacked the site. According to The Arab Source, three armored cars and 27 militants were destroyed during the battle. The representatives of the special services of Syria among the dead identified well-known terrorists: Mesha'al Al-'Anzi (from Saudi Arabia), "Abu Abdel-Rahman" and Hussein al-Wadi (from Iraq) and others.

... Reports from the war zone reflect the new successful attacks of our Aerospace Forces in Syria. Looking at them in the TV picture, I want to believe together with the inhabitants of Latakia, whose hopes were reflected in her article by Lindsay Hills, that “the operation is military aviation The RF marks the beginning of the end of the war ”and peace for the whole region of the planet.

We are in Yandex Zen
Syria: "Friends" met again
Syria: Americans scare themselves, and Asma Asad buys chairs
10 comments
Information
Dear reader, to leave comments on the publication, you must to register.