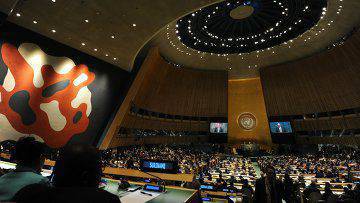 “To tolerate the situation in the world is no longer possible,” said Russian President Vladimir Putin.


28 September 2015, the world saw the difference between Russia and Washington. Putin’s approach is based on reality, Obama’s approach is vain boasting and lies, and the stocks of this lie are coming to an end.

Having said the truth in an era of universal deception, Putin committed a revolutionary act. Having painted a picture of the massacres, destruction and chaos that Washington brought to the Middle East, North Africa and Ukraine, as well as extremist jihadist forces, which as a result gained power, Putin asked Washington: "Do you understand now what you have done?"

This Putin's question reminds me of a question to Joseph Welch, which he asked Senator Joseph McCarthy: “Is there not a single decency in you?” It is believed that Welch was the beginning of McCarthy’s career decline.

Perhaps the Putin question will have the same effect and draw a line under the era of the rule of "American exclusivity."

If this happens, it will mean that Putin launched a revolution that would put an end to world submission to Washington.

Putin focused on the legality of the Russian intervention in Syria, to which he went at the request of the Syrian government. He compares the respect with which Russia relates to international law with the behavior of Washington and France in Syria - the governments that violated the sovereignty of Syria with their uninvited and illegal military actions.

The world understands that it is Washington and its vassals, and not Russia at all, that violate international legal norms.

Hanzheyskaya self-righteousness, which hides the desire of Washington to serve only their own interests, has now become obvious to all.

Washington relies on its arsenal of lies. The Washington disinformation apparatus is operating at full capacity. Like a BBC reporter who had previously announced the demolition of the World Trade Center 7 building, while the building was still in place, the Washington disinformation service had already announced its first civilian casualties as a result of Russian air strikes - even before our aircraft took off, as President Putin said in his comments on reports from Washington.

As a result of their blind submission to Washington, the puppet states of Europe now faced an avalanche of refugees fleeing the wars that Washington unleashed and which Europeans so frivolously supported. Now that the Europeans have finally understood the true value of serving Washington, the reputation of the European ruling political parties will suffer greatly. New parties and ruling coalitions are likely to choose other, more independent ways to protect themselves from the consequences of those mistakes that originate in the arrogance and pride of Washington.

The collapse of the Empire is near.

Dr. Paul Craig Roberts is a former Deputy Secretary of the Treasury and Assistant Editor of the Wall Street Journal. He has authored columns in publications such as Business Week, Scripps Howard News Service and Creators Syndicate. He has worked in many universities. His online columns are read all over the world.

Ctrl Enter
Noticed oshЫbku Highlight text and press. Ctrl + Enter
We are
Results of the week. “You see, every year my friends and I go to the bathhouse. This is our tradition. ”Patrol in Helmand Province, Afghanistan
Military Reviewin Yandex News
Military Reviewin Google News
85 comments
Information
Dear reader, to leave comments on the publication, you must sign in.