October 6 2015
75
The media of our Western partners are singing the old song again. Let us omit that this is more a moan than a song, for, as stated in one old Russian song, “this moan is called a song for them”. 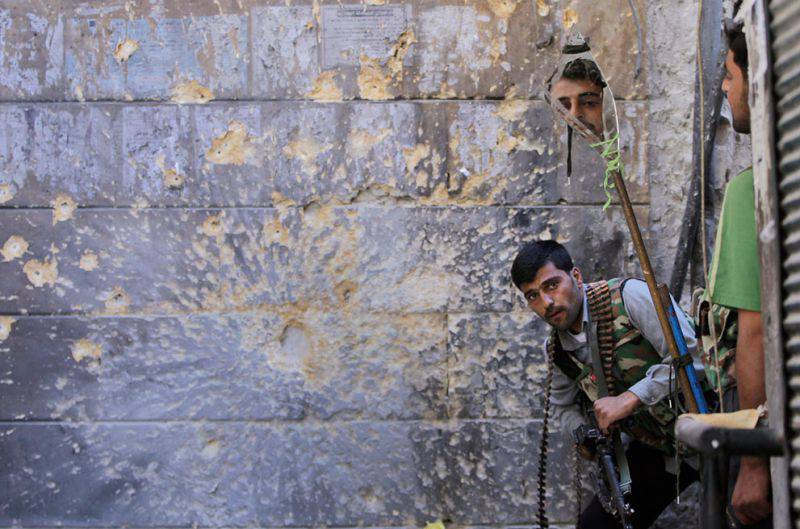 In an interview with The Sun, British Defense Minister Michael Fallon said that only 5% of Russian air strikes against Syria were aimed at the so-called Islamic State. Most of the attacks were on rebel formations, including the West-backed Free Syrian Army. Civilians also became victims of bombardments.

It’s hard to say where Fallon found all this (I mean victims among civilians), apparently, the American colleagues shared pictures from Afghanistan, where they killed the hospital. But bezrybe and cancer fish.

"The United States and its allies condemn the air campaign of Russia, arguing that Moscow is using it as a cover for the support of the government of Syrian President Bashar Assad." It is already adored by all former Soviet natives "Voice of America".

Apparently, the guys from "GA" did not get to the UN General Assembly. Or hit, but Putin did not hear. Or heard, but did not understand. In general, the problem is obvious. Putin from the podium spoke quite openly about Russia's support for Syria through its president. A "vocal" past the ticket flew. Or they did not understand that air gifts to terrorists, regardless of their affiliation, are the promised help and support.

On Friday, the President of the United States "overreached". What he said exactly at random is obvious. Just because I had to say something. Well, they have it in America. On Friday, the president should say something to the people. Otherwise, the weekend will not be set. That Obama and talked.

«Vladimir Putin in Syria does not show his strength, he is there because of the weakness of his client, Bashar al-Assad, whom the supplied weapon and money. Now he sends his own planes and pilots. ”

Yes, we must take note, every Friday to listen to Obama. So many new things can be found out ... It turns out that Putin has his own combat aircraft with pilots. Great. But in general, envy is a bad thing. It would be worth recalling this to Barack Huseynovich. Yes, and Putin also has a bird-three, drawn by wild bears. And own flock of Siberian Cranes, where he is the type of leader. And a personal whale whale, on which he rides Solovki. After these jokes, the personal regiment of "sushhek" - yes this is garbage, the right word! Well this is Russia, and not something else there!

"Russia does not make a difference between the militants of the IG and the" moderate Sunni opposition, which aims to relieve Assad of power. From their point of view, they are all terrorists. Such indifference will lead to consequences for post-war Syria because it will be necessary to involve moderate groups ".

This is something new. To start the war as it were necessary to end This time. And then to think about who and how will manage it. Elections are there, and so on. It seems so in the spirit of democracy. And if such ways are taken, then what, ISIS, too, should be reserved in the parliament right away?

And again, who would say. Something I did not observe in the congress of Indian people even once.

Well, and about the fact that the Russians do not make a difference ... Well, forgive us, unwashed, we have been established for so many centuries. Put on the shape of the "SS" - hang, dear ... sway. There was one rope for the Germans, for the Balts, and for Western Ukrainians. You cut your heads, you blow up thousands of years old monuments - be kind, brains the hot Syrian sand. Because it does not matter how you cut and blew, frantically or moderately.

Such are we from the American point of view, unenlightened. Dull, in short. Stupidly dry international terrorism in the deserts. "With ears".

But the most important thing is how our "partners" began to move. The US Department of Defense, knocking out another bag of money for the fight against terrorism, said that more UAVs are needed. Say, we do not expose people (ours) to risk, we beat the Russians in the target more precisely and so on. Well, the fact that instead of a warehouse sometimes arrives at the farm, or, there, to the hospital - this is solely due to the imperfection of the guidance systems. In short, you need more dollars. And everything will be luxurious.

Well, the British also decided that without their drones LIH can not win.

About the continuation of airstrikes "coalition", half of which bombards the sands of Syria, and the other gives money to those who are on the same front line with ISIS, just keep quiet.

"The coalition, in addition to the United States, includes the United Kingdom, Turkey, France, Germany, Qatar and Saudi Arabia. These countries throughout the year inflict airstrikes on the positions of the IG."

This is again from the "vociferous" quote. It turns out who has been hitting terrorists for a year now. Most of all succeeded, as I understand it, Qatar and Saudi Arabia. Especially Qatar. All six of their "Alpha Jets" probably the resource has already developed all, storming LIH.

And now we have already started talking about the fact that we cannot do without a ground operation. Well, right, if it goes on like this, then yes, the operation will be needed. To save those in whom the coalition poured money all this time.

Smart people say that история develops in a spiral. All this is very similar to the events of seventy years ago. When Britain drove the whole army of Rommel through the deserts, the Americans fought hard with the Japanese and so on. Nobody wanted to go to Europe.

But as soon as it became clear that Hitler really had already drunk a coffin from a Russian tree, they all rushed to conquer it with “menacing power”. Even the French, whose place was real at the pump house. Well, the type won.

Now in Syria it is quite obvious, a similar situation is developing. These Russians are bombing the wrong ones and not there. Assad is helped, not realizing that Assad, although he is a legitimate president, but the coalition is completely disagreeable. Therefore, taking advantage of the fact that the terrorists clearly have a panic caused by what the Russians are doing, Assad may very well ... re-educate them. And then who will re-educate Assad and induce democracy?

So, it is necessary to urgently introduce a contingent in Syria and defeat terrorism there. But at the same time to save those who have not yet fallen under the bombs and missiles of these stupid Russians. That is the Syrian opposition. Because how to blow up the monuments of mankind is one thing, but to die for nothing is quite another. And obviously neither the opposition from the SSA nor their coalition patrons want this.

In fact, the “moderate bandits” from the SSA are not to blame for the fact that there is such a heat in Syria? The varnish on the balalaika is boiling, the vodka evaporates, the bears are categorically refused to go to Syria. And the Russian pilots who have become angry with such a terrible situation, (quite accurately and professionally) put out their anger on everything that was built by the coalition for the "moderate". Not seeing the difference between the one who kills radically and who kills moderately. All dried.

So I think that the moment when all these coalitionists will go to open the "second front" is not far off. Well, what will happen next, obviously. Seventy years ago, passed already.

Moreover, in the final, you can see a completely surprised bearded face and hear the question, which has already become part of the story: "Hey, guys, did you beat us too? Why?"