October 6 2015
39
British Prime Minister D. Cameron is extremely dissatisfied with the "behavior" of Russia in the Middle East. According to him, Russia's military intervention in Syria helps support Assad's “butcher” and “worsens the situation.” Meanwhile, military experts and officers in the UK began to speculate on increasing tension between Russia and NATO and the need to “modernize Tanks». 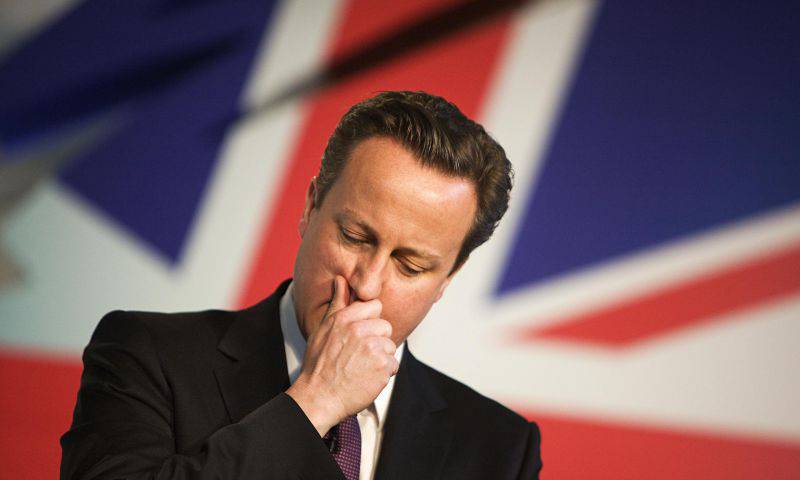 According to British Prime Minister David Cameron, who is quoted as saying "BBC", the Russian military does not see a difference in Syria between Islamist militants and opposition leaders fighting the Syrian President Assad. About this Mr. Cameron said on speech in Oxfordshire.

In his opinion, Russia's military intervention "in fact worsened the situation even more." D. Cameron called the President of Syria B. Assad a “butcher”, his rule as a “regime” and declared: the Arab world is right “condemning Russia for its deeds”.

Britain should invest in the modernization of its main battle tanks, as the threat of a land war with Russia is increasing, the newspaper notes.

This "threat" is reported by British officers. It is expressed in the form of tension between NATO states and Moscow. In addition, the Russians threaten “nuclear countermeasures” in connection with the news about nuclear facilities in Germany.

David Cameron, continues publication, is trying to find a “compromise” with Russian President Vladimir Putin against the terrorist group “IG” in Syria, but “Russia's aggression in Eastern Europe, an increase in the incursions of Russian bombers into the airspace of NATO member countries and the creation of a new Russian The "supertank" led the senior officers of the British army to the fact that the prospects for the traditional land war in Eastern Europe can no longer be ignored. "

Now the British army is 227 main battle tank "Challenger 2" (Challenger 2). This is a real power, however, "they are in dire need of modernization."

Last year, the British army took part in NATO exercises in Poland with more than a hundred armored vehicles. Operation Black Eagle stressed the ability of the British Army to "deploy an armored combat system in a short time, anywhere in the world in support of the Allies."

But the newspaper Express didn’t understand that the native United Kingdom (unlike the NATO allies mentioned) was not able to deploy a full tank squadron (14 tanks plus two in reserve) within thirty days.

It took more than three months to train some tanks! They were prepared for such a long time because the machines were preserved or needed replacement parts.

General Nick Carter, who heads the British army, said that the future of the Challenger 2 tanks is decided at the highest level. He confirmed that there was a problem with the tanks. According to him, if nothing is done, then there will be more problems.

Meanwhile, the "sources" (senior officers of the British army) confirmed to the newspaper that the military experts think a lot about the "development of the new Russian main battle tank T-14, presented at the Moscow Victory Parade in May. The "leading minds" of Britain are completely "focused" on this issue.

“Focused” think including the fact that the Russian army expects to get to 2020 year already 2300 machines representing the new generation.

Another task that occupies “minds” is a recent statement by Moscow that it will be forced to take retaliatory measures in order to “restore the balance of power” in Europe, if the United States really renews its nuclear presence in Germany and places twenty B61-12 bombs there (at Büchel airbase in 2015 year).

Retired Major General Patrick Cordingly, who commanded the Desert Rats 7 Armored Brigade and led British troops to defeat Iraqi forces in 1991, said that there are battle tanks in the 100 countries in the world, and there are reasons for that . And for Britain, not to invest in its main battle tank would be “to go against logic.”

“A tank is more than an armament system,” the retired military man believes. - This is a way to make a statement about yourself. If you are trying to rule in another country, it (the tank) helps to carry out your intention. "

But what is the situation with British armored heavyweights?

In 2010, most British tanks were stored. At that time, London strategists focused on an “asymmetric war” in Afghanistan. In 2012, it was even decided to sell the tank building base in Newcastle. The UK base in Germany should also close (until 2019 of the year).

According to the publication, events that have occurred since then, “including the Russian invasion of the Crimea,” showed that the United Kingdom and the rest of NATO countries “should be prepared to consider the Cold War scenarios, which include the usual, symmetrical war in Eastern Europe ". This newspaper said at night "source".

As follows from the material "Express", the British military were afraid of "symmetrical war" with Russia. With tanks.

But the British Foreign Office is afraid of an “asymmetrical” war.

“A strong propaganda message is proposed stating that something is being done, although in reality something completely different is going on. And if you present evidence, everything is denied outright, "- quotes the words of the head of the British Foreign Ministry "Deutsche Welle".

Hammond believes that Russia today is a threat to the international system: it demonstrates disrespect for diplomatic norms (for example, the “annexation” of the Crimea is called). Nevertheless, the role of Russia in the Middle East is important: “It would not be in our interests to abandon negotiations with the Russians on the situation in Syria because we are strict in assessing what they have done in Ukraine.”

However, Mr. Hammond immediately noted that attempts to negotiate with representatives of Moscow come to a standstill: “You try to speak with the Russians, and they simply repeat their position.”

However, Hammond does not deny that a transitional period is needed to end the civil war in Syria. President Assad could have remained in power “for three days, three weeks, three years, or even longer” (provided that he does not participate in future elections). True, so far, the minister noted, about the transition period "there are no agreements with either the Russians or the Iranians."

To come to such agreements would be rather difficult, we add on our own. While the Western "partners" divide the terrorists into good and bad, into "moderate" and "extremists", Moscow is really fighting the evil in the form of "IS" and that bearded hired rabble that "IS" complements. And the results of the struggle that has begun are already today: according to media reports, Islamist fighters numbering more than three thousand fled from Syria to Jordan. Blows russian aviation they scared all the warriors of Allah - from the IS, Jabhat al-Nusra and Jaish al-Yarmouk factions. The American coalition has not been able to achieve such an effective strike over many months.

We are in Yandex Zen
Project "ZZ". Coward does not play hockey
UK: Goodbye, EU, Goodbye, Scotland?
39 comments
Information
Dear reader, to leave comments on the publication, you must to register.