October 5 2015
109
More than three thousand terrorists of the ISIS, Jebhat al-Nusra and Jaysh al-Yarmouk fled from Syria to Jordan. The militants were frightened by the blows of the Russian aviation and the offensive of Assad’s army. Former Canadian Prime Minister called on the West to accept Russia's assistance in the fight against ISIS and called Putin a “guy” who “thinks clearly.” According to him, some weakling couldn’t manage the Russians, who are “very tough” in hockey. The British Ministry of Defense believes that the actions of Russians in Syria crossed out plans to create a no-fly zone there, and D. Cameron did say that the Kremlin does not hit the Islamists, but “moderate opposition”. Meanwhile, a warship appeared in the waters of Sweden, which the journalists recorded in the “Russians” and sounded the alarm.


Over three thousand militants from the Islamic State, Dzhebhat an-Nusra and Jaish al-Yarmouk fled Syria to Jordan. These militants are afraid of the advance of the army of Assad and the strikes of Russian aviation, reports "Lenta.ru" with reference to the RIA "News».

Earlier it was reported that after the Russian aircraft bombed IG’s positions in Rakka, militants began to evacuate their families to the city of Mosul (located in Iraq and still controlled by IG).

Canadian edition "Huffington Post" With reference to The Canadian Press published a statement by former Prime Minister of Canada Jean Chrétien. He believes that Canada should "welcome" the proposal of Russian President Vladimir Putin to help fight terrorists from the "IG" in Syria.

Putin’s involvement in the Middle East conflict can be controversial, the former prime minister said, but the West “will do the right thing” if it accepts Putin’s support.

“If Putin wants to help, he should say: welcome,” said Chrétien in Vancouver.

“I met with Putin,” the former prime minister told reporters. - He is a tough guy and thinks clearly. Manage Russia and could not be someone softer. After all, they (the Russians. - O. Ch.) Play hockey very hard. ”

The publication reminds that Chrétien met with Putin in Moscow at the beginning of 2015. The current Prime Minister (Harper) avoids contact with the President of Russia because of the “unrest in Ukraine and the annexation of the Crimea.”

Putin’s actions in Syria infuriated the British. The Ministry of Defense of the United Kingdom said that the Kremlin’s policy has canceled out Western plans to create a no-fly zone in Syria.

"Exclusive" report of the political editor «The Sun» Tom Dunn begins with the approval of the Minister of Defense of Great Britain Michael Fallon: they say, Vladimir Putin does not fight with terrorists at all, but kills Syrian citizens in order to support his ally, President Assad.

Fallon says the Russians use "unguided ammunition", which is dumped "in areas where civilians live." Russian "kill civilians." The actions of the Kremlin are directed "against the free Syrian forces fighting with Assad."

The minister is confident that in this way Russia entered the civil war in Syria.

He also acknowledged that these "astounding" actions of the Kremlin canceled the plans of the West to create a no-fly zone. The West wanted to make such a zone in order to “protect the refugees”.

Mr. Fallon does not think that Putin has "outwitted" the West. The minister admits that the Kremlin "has complicated the situation in Syria." “But we are not powerless,” he said.

Of course, the Minister of Defense was not alone.

A statement by Prime Minister David Cameron appeared in the press.

According to the Prime Minister, who is quoted "BBC", the Russian military does not distinguish between Islamist militants and those who fight with the current Syrian president. 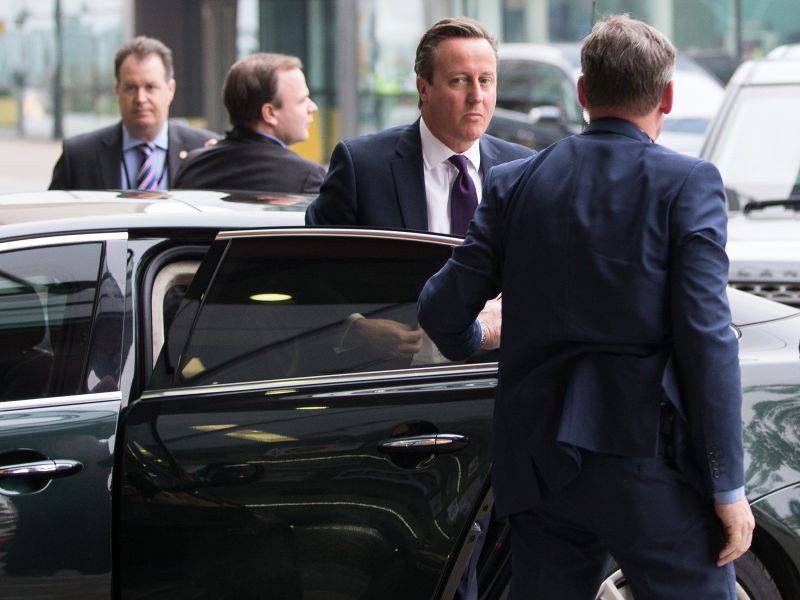 He is displeased with Putin. British Prime Minister D. Cameron gets out of the car. October 4 2015 of the year

“It is perfectly clear that Russia does not distinguish between the IG and the legitimate opposition groups in Syria. As a result, they (Russians. - O. Ch.) Actually maintain the regime of Assad’s butcher and help him, ”he said.

According to Cameron, the Arab world is right, "condemning Russia for its actions."

“However, we should now,” Cameron added, “use this moment to create a promising comprehensive plan for a political transition in Syria.” It will bring peace to the region. ”

Meanwhile, the Swedes discovered a Russian ship in their waters.

The appearance of a Russian warship in the southern Swedish waters instilled "fear in the Swedish media," the newspaper notes. True, a representative of the Swedish armed forces reported that the ship’s actions were “absolutely normal.”

The ship was spotted near Malmo (the largest city in southern Sweden) around 7 hours of the evening, witnesses indicate.

Marie Tisreter, an employee of the information department in the Swedish armed forces, explained to frightened journalists that the ship did come from Russia, but he had every right to go through the Swedish and Danish waters. Jenny Larsson, a spokesman for the Swedish Coast Guard, confirmed this information, adding, however, that the vessel’s actions "might have seemed provocative."

Where did the Swedes get these feelings of "provocation"?

The publication reminds that in the relations between Sweden and the “eastern neighbor”, “tensions” have intensified in recent years. In 2014, the Security Service of Sweden announced in its annual report that Russia poses the greatest threat to the northern countries.

A year ago, a “foreign submarine” (“presumably from Russia, although this was not confirmed,” the newspaper writes) was spotted in Swedish waters. Then the second one was noticed. And then Russian aircraft flew: they were spotted either near the Swedish airspace, or even in this very space.

The government of Sweden announced in 2015 that it will invest 10,2 billion kroner in the armed forces, as well as strengthen the exercises with NATO.

True, as the former commander-in-chief of the Swedish armed forces, Sverker Goranson, remarked, his homeland would be able to hold out against the Russians in just 1 (one) week.

Putin is everywhere. He is in Ukraine, he is in Syria, he is in the “northern countries”. Putin is not only afraid of Poroshenko and Yatsenyuk, but also the terrorists from the IG, who are fleeing thousands from their “caliphate”, just to avoid Russian fire. For the Swedes, the adjective “Russian” in the newspaper headline is sufficient for a shake. The British have already put an end to the "no-fly zone" in Syria, and after all, Moscow has just begun to act there. Only a few days passed, and the British Minister of Defense and the Prime Minister began to look like crazy. Probably, Putin decided to finally show the world, looking for "tens of thousands of armed invaders" in Ukraine, what the Russian army really is.

Ctrl Enter
Noticed oshЫbku Highlight text and press. Ctrl + Enter
We are
Results of the week. “Well, if you don't want anything else ...”Syria: Americans scare themselves, and Asma Asad buys chairs
Military Reviewin Yandex News
Military Reviewin Google News
109 comments
Information
Dear reader, to leave comments on the publication, you must sign in.