The most absurd ships in the history of the navy 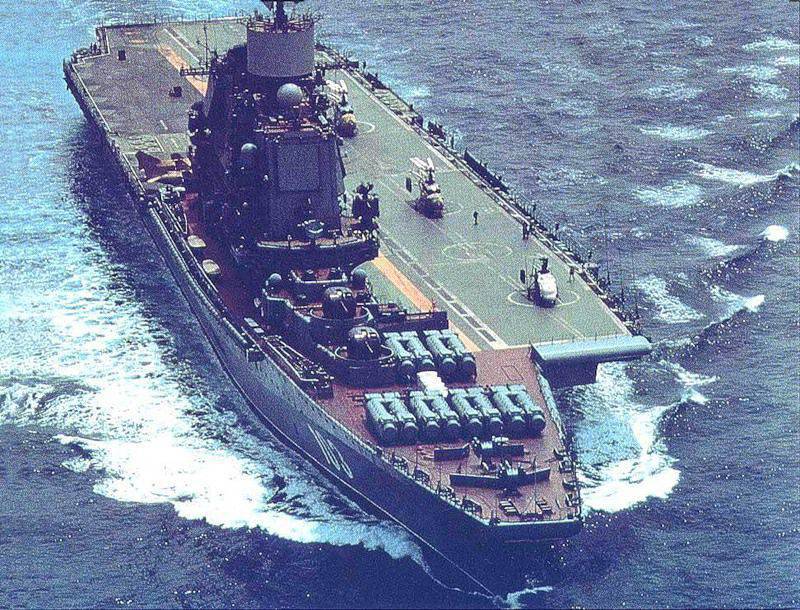 Demolish can not be left. The command of the Australian Navy still can not decide where to put a comma.

The helicopter carrier “Canberra” is an export version of the UDC “Juan Carlos I” from the Spanish company “Navantia”.

Inherited from the “Juan Carlos” Australian UDC got a bow springboard, which the Spaniards use to facilitate take-off of the VTOL “Sea Harrier”. Springboard - a characteristic feature UDKV of this type. It expands the tactical capabilities of “Juan Carlos” and allows you to use the ship as a light aircraft carrier. 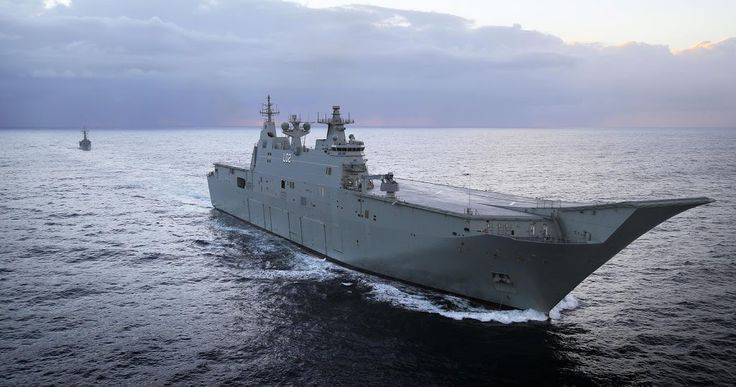 And here a paradox arose. Deck aviation The Australian Navy is represented exclusively by rotorcraft, for the operation of which it is preferable to have a flat deck. Landing a helicopter on a 13-degree springboard is not an easy task.

All plans for the modernization of “Canberra” under the basis of promising F-35B remained unfulfilled. The military came to the conclusion that this would require serious reworking of the project, incl. taking measures to increase aviation fuel supplies, increase the lift capacity of the elevator and install a heat-resistant coating with a cooling system on the flight deck.

At the same time, the dismantling of the springboard, which occupies the flight deck 50 meters, is also considered an extremely heavy technical task.

As a result, possessing large dimensions and displacement, the Australian “Canberra” has no advantages in terms of composition of the air group over UDKV of other countries.

Separately, there is the question of the justification for acquiring UDKV from the point of view of the small Australian Navy. 1,5 billion dollars for a low-speed “barge” without any weapons, means of detecting and controlling fire. Where are the Australians going to land? For the delivery of soldiers to Afghanistan, it is enough to order a charter flight.

The Americans were afraid of Soviet submarines, and they taunted TAVKR, calling them the surrogate brainchild of Admiral Gorshkov. 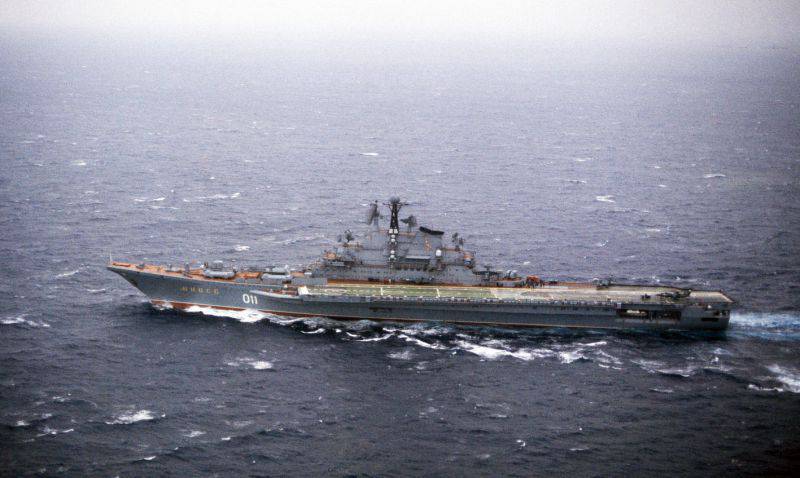 In terms of their composition, the formidable TAVKR corresponded to a large anti-submarine ship - despite a six-fold difference in their displacement! With the appearance of the RKR “Glory”, the comparison generally lost all meaning, due to the incomparable capabilities of TAVKRs and “normal” cruisers armed with 16 “Basalts” and the long-range anti-aircraft system C-300F.

The TAVKR carrier-based aviation is the “Yak-38 top mast guard aircraft” with an 10-minute fuel reserve. About the combat capabilities of the Soviet "verticals" says a simple fact - they did not have radar. Detection of the enemy was carried out in a visual way, which in the coming era of the fourth generation of fighters meant a sudden death in a battle against a medium-range (long-range) URVV.

Moreover, unlike the British Sea Harrier "Sea Harrier", for which a shortened "springboard" take-off was envisaged in order to increase their combat load, the layout of the Russian TAVKR excluded, in principle, the presence of any springboard.

In general, the sailors had a lot of fun, throwing a dozen or so full-blown Soviet rubles into the wind. Only positive news lay in the fact that despite the overwhelming number of accidents, the loss of flight personnel were calculated in units. Forced ejection system Yak-38 compensated for all the shortcomings of this stupid attraction.

He was created as a fighter of enemy cruisers. Especially for it, 305 mm rapid-fire gun mounts and a completely non-cruiser armored system with 229 mm belts and an armored deck system whose total thickness reached 170 mm were developed!

In the end, “Alaska” was too big for a cruiser, but not strong enough to compete with battleships. The Americans had to come up with a new classification and write down “Alaska” in “big cruisers” (СB).

Admirals came to their senses too late. Construction was halted on the third building (CB-3 “Hawaii”), when it was ready 85%. 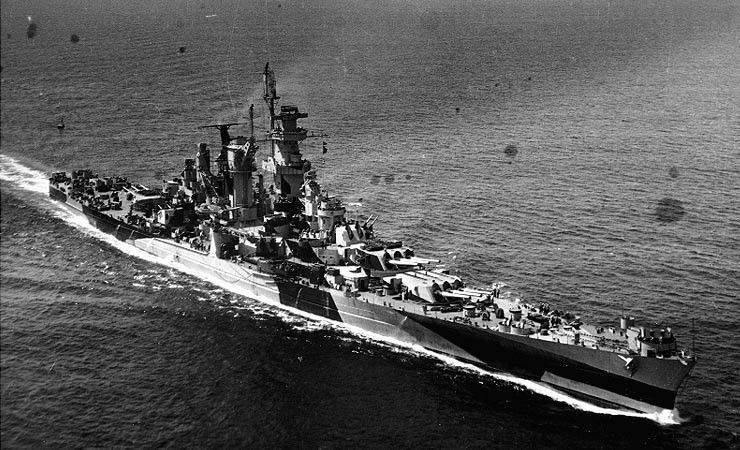 No less sad was the fate of two built “big cruisers” - “Alaska” and “Guam”. After serving less than two years, the giant ships, whose length reached a quarter of a kilometer, were taken to the reserve. Subsequently, various plans to turn the Alasok into missile cruisers were discussed, but none of the proposals was made. Having stood in reserve for 15 years, both giants went for scrap.

In addition to the general absurdity of the project, Alaska is criticized for unforgivable mistakes in its design. With such dimensions (34 000 tons) it was possible to provide much better security (for example, the German “Scharnhorst”). And, nonsense by the standards of 40's, the almost complete absence of anti-torpedo protection! The super cruiser had a good chance to tip over from hitting just one torpedo.

No, for all its flaws, Alaska was not a bad ship. I will say more - under other circumstances, acting under a different flag, “Alaska” would become the flagship and pride of the majority of the fleets of the world. But for the Americans, who had a clear concept of using the Navy and experience in building balanced TKR and LC, the adventure with the construction of such an awkward ship looks like sheer insanity.

The super-ship, to the creation of which the 200 research teams of the USSR were involved, made the only trip during its career - the transition from the Baltic to the intended duty station, to the Pacific Ocean. After that, forever out of order.

Due to the exorbitant complexity of its design, it was still in the process of building that the “Ural” received a steady lurch in 2 ° to the left side.

What was this paranormal ship built for?

The only purpose of the “Ural” was to monitor the missile range on the Kwajalein Atoll. Obtaining reliable information about the warheads of American missiles, their size, characteristics and behavior in the final segment of the trajectory, using radar and optical means. 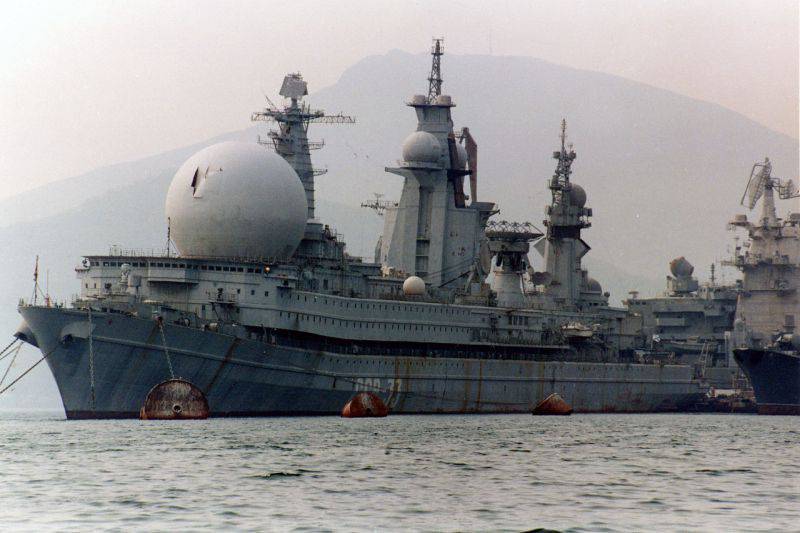 The more information about this project is revealed, the more bewildered is this stillborn child of a dying USSR.

In fact, the capabilities of Ural corresponded to the capabilities of the upgraded Aegis system (the most famous episode: interception of a space satellite at an altitude of 247 km). Moreover, the first "Aegis" was installed on a serial warship seven years before the appearance of the "Ural", in 1983 year. Neither then nor now nuclear reactors were required for the operation of Ajis. Also, as they are not required for the operation of the giant sea pro-radar SBX.

Of course, in our day the restoration of a large intelligence ship “Ural” does not make sense. Installed on board the computer "Elbrus" inferior in performance to any smartphone. And the radar complex is morally obsolete with the advent of modern radars with active phased arrays.

Masterpiece? Sure! “Ural” has once again proved what the victory of technology over common sense leads to.

The most useful member of this list. And not only because he launched two Tomahawks on Iraq. Unlike other irresponsible projects, “Virginia” at the dawn of her career really was of military value and was considered almost the key element of the AUG air defense.

However, this история It had a standard for all monsters end. 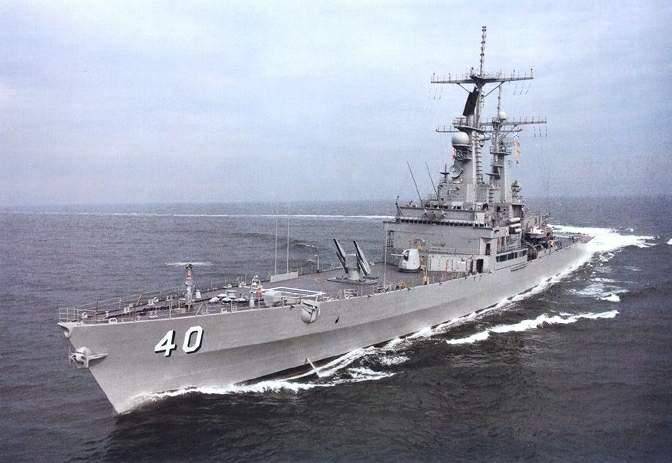 Four atomic giants, having served less than half of the planned period (“Texas” - just 15 years!), Ended up in a landfill. Why?

In the presence of advanced engine-building and excellent shipboard gas turbines, the decision to build cruisers with nuclear power plants was initially at least controversial. It is worth noting that this was not the first American experience in creating nuclear cruisers, while all previous experiments did not end with anything good.

The beginning of the end of the Virginia was the appearance of cruisers equipped with the Aegis system and underdeck launchers with a wide range of ammunition used.

The calculations made in 1996 year showed that the cost of operating a nuclear cruiser (40 million dollars per year) is almost twice as high as Ajis cruisers and destroyers, with an incomparable difference in their capabilities. The cost of upgrading Virginia to turn it into Ages cruiser was as the construction of a new “Tikondery”. However, even in this case, the modernized Virginia would be inferior to the new ship. 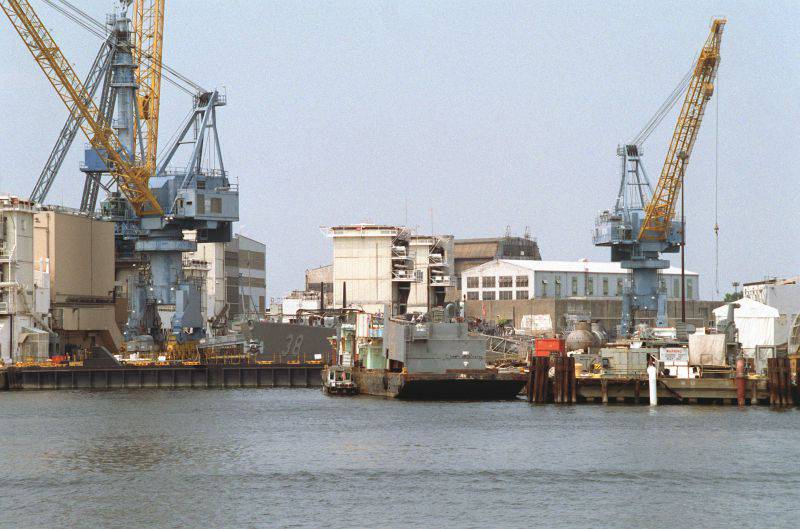 "Virginia" on recycling, the beginning of the 2000's

The list of stupid and absurd inventions in the field of the Navy is not limited to the five ships represented. Albert Einstein said: “There are two endless things in the world: the Universe and human stupidity. Although I'm not quite sure about the Universe. ”

Ctrl Enter
Noticed a mistake Highlight text and press. Ctrl + Enter
We are
Deck aircraft. Part of 3. EuropeDeck Aviation. Part of 1. USA
208 comments
Information
Dear reader, to leave comments on the publication, you must to register.