Anti-tank "tachanka" in the French style

October 6 2015
9
Today, when the development of science and technology has reached such a level that an effective armored car can be made from an ordinary truck, and a mobile artillery or rocket launcher from an ordinary pickup (even the term “war of pickups” has appeared) is interesting to see, but how with the imagination of the designers who created similar combat vehicles, the situation was earlier. Well, for example, who was the first to think of putting artillery guns in the body of off-road vehicles and thereby turn them into effective artillery installations? 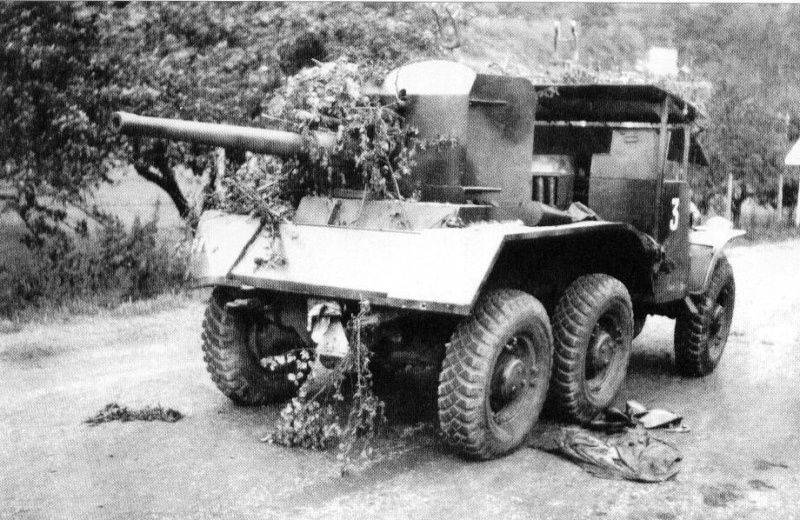 "Laffley" 15ТСС with disguise from the branches.

From a retrospective point of view, the closest to this direction in the interval between the two world wars were ... the French, which was the result of an active policy of motorization, which the French army pursued. However, work in this area was carried out in all the then economically developed countries, where a wide variety of cars were created and immediately put into service. Well, the most interesting designs were created in France, the USSR and Germany.

“Laffley” W 15T in the variant of the conveyor of the infantry.

Interestingly, immediately after the end of World War I, the French focused their attention on wheeled-tracked and three-axle vehicles (with the 6x4 formula) for mass production, but in subsequent years the main attention was focused on the design of all-wheel drive vehicles (4XXNNXX and 4XXNNXX formulas) . By this time, new hinges for cardan transmissions, and several new types of independent suspensions were mastered in production. The “technological breakthrough” in this area gave the designers the illusion of a truly unlimited perspective on the automotive industry, and they began to create more and more ingenious and unusual designs. 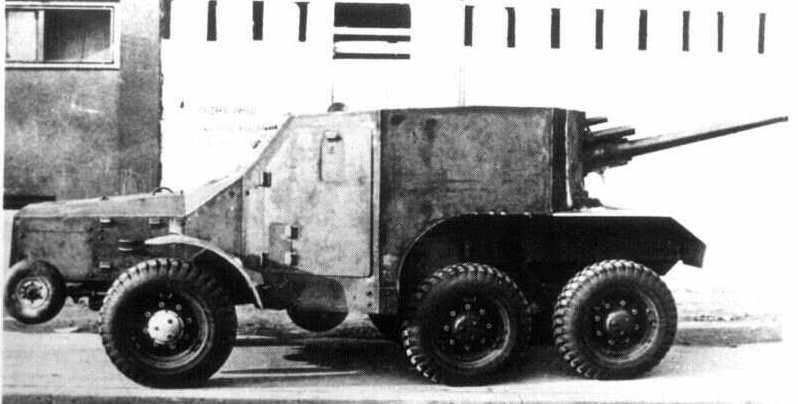 Prototype SAU on the chassis "Laffley".

Especially in this direction, as already noted, German and French engineers were zealous. But if the German firms carried out orders from the state, the French companies developed promising army all-terrain vehicles, and the army team chose what they like from the ready. One such firm, Laffley, located in the Paris suburb of Asnerres, also participated in the development of new machines, not at all embarrassed by the weakness of its production base. Meanwhile, the company was so small that it did not even have its own engine production and was forced to buy them from Peugeot and Hotchkiss. But her ambitions are not
decreased! 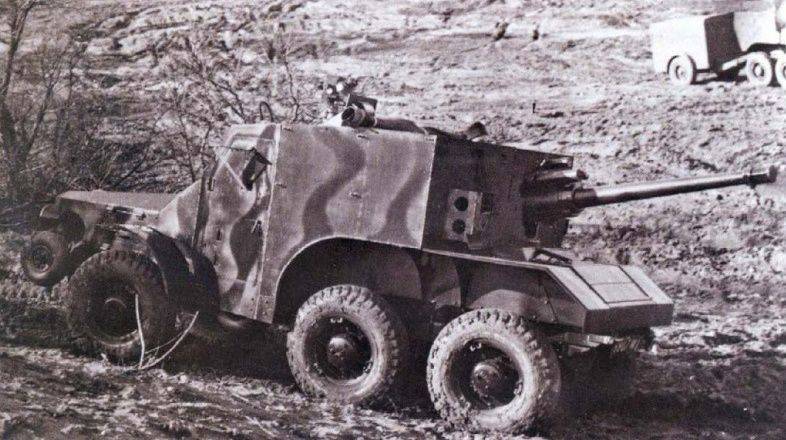 Prototype SAU on the “Luffly” chassis in characteristic camouflage.

Starting with 1935, it is setting up the production of several two- and three-axle military cars, unified among themselves by design and by main aggregates. And of course, all of these cars had a brand appearance that was unique to the products of this company. For example, the wheels were of large diameter (230x40 tires), with a “proprietary” tread pattern and mounted on them with a significant collapse. The engine hood was long and protruded far in advance. The cabin had only an awning cover. To increase the terrain on the ground, the car received two more pairs of small wheels: one on the bumper under the headlights, and on the frame under the driver's cab.

On all the cars of the “Laffly” family there were four-cylinder engines of the “Hotchkiss” type (“Model 486”, horsepower 52). The cars had a four-speed gearbox, a two-speed multiplier, a mechanical brake drive, and a separate drive for each wheel from a separate drive shaft (!), And an independent wheel suspension on coil springs. Semi-elliptical springs were also placed on triaxial models from behind.

From 1935 to 1938, Luffly and Hotchkiss jointly launched 100 dual-axis and 411 three-axis machines V15T (4x4) and S15T (6X6) for the French army. But it seemed to military experts that the triaxial S15T is too tall and therefore noticeable silhouette. Therefore, before the outbreak of World War II, the Ground Forces ordered a modification of W15T with a lower body for use as a light artillery tractor from Hotchkiss. This car had a base 1845x1000 mm and dimensions 4500x1850 mm (while the height of the base model was equal to 2450 mm), and weighed 3 tons.

The W15T was supposed to carry an 47-mm anti-tank gun and its calculation. At the same time, the driver of the car was on the right, the commander was on the left, and behind him were four soldiers - the calculation of the guns sitting opposite each other, to the right and to the left of the seats in which there were boxes for ammunition and equipment. 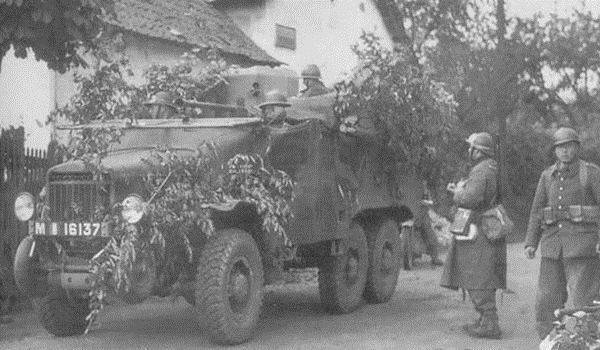 With the beginning of the war, the army demanded to increase the production of these machines to 1120 copies. “Hotchkiss”, which could not cope with such a load, gave part of the order - 500 W15T - to Citroen. Until the end of the hostilities in France, she was able to release only about 100 machines in the “Tractor for 25-mm automatic anti-aircraft cannon” configuration and that's it.

Hotchkiss factories built 80 cars. But the military wanted to give the 47-mm gun even more mobility and for this put it on the chassis of this car! A prototype “Laffley” 15ТСС was built of a very strange design, in which an armored wheelhouse without a roof was mounted in place of the body, and a 47-mm anti-tank gun SA35 mod. 1937, directed the trunk back. This arrangement was explained by the tactics of use, because anti-tank guns not only attack, but defend themselves from enemy tanks and after inflicting losses, they quickly depart. At the same time, the weight of this wheeled self-propelled gun was more than six tons.

The project "tank hunter" was approved, but at the request of the military it was significantly reworked and simplified. The gun was placed on a swivel base, moving the car from the axis to the right, which allowed it to have a radius of firing at the horizon equal to 70 degrees. The bronerbuk was replaced with standard 47-mm guns with an armor shield and additional armor plates on the left and right, armored doors were removed, the walls were lowered to the level of mud shields. But instead of the windshield now stood armor plate with two narrow, horizontally located, viewing slits. Above the driver and the commander also put a roof of steel sheet, welded to the frame of the L-shaped channel. In addition, the installation received an 7,5-mm machine gun FM-24. In general, the car had some kind of "unfinished" look, more adhering to improvisation of some illegal gang, made in the garage, rather than a serial army machine. By itself, the car was taller than the 47-mm guns, and it was more difficult to disguise it in position. And the lack of armor turned it into easy prey for armored vehicles, because a single bullet was sometimes enough to break its radiator! 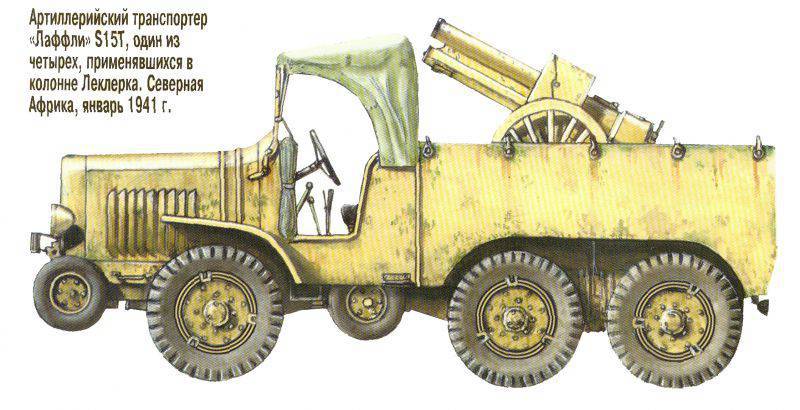 24 May 1940. The first 10 batteries of new self-propelled anti-tank installations 15ТСС were finally formed. Each unit consisted of five "tank hunters", a staff V15R all-terrain vehicle, a S25T tractor and two TU1 semi-tracked vehicles "Unik" for the delivery of ammunition. All in all, by 17 June 1940, the French army had at its disposal 14 batteries of Laffley self-propelled guns.

Since the beginning of the war, the Laffley self-propelled batteries were transferred to the area of ​​the city of Abbeville in order to close the gap on the front, which was formed after the successful battle of the Germans for this city. In these battles, most of the machines were lost, and the rest fought already on the Loire, where they tried to hold back the flow of German tanks, rushing to the south of France. Some of them, of course, fell into the hands of the Germans. But since there is no data on their use in the Wehrmacht, it is obvious that they were not considered valuable in military terms. True, in the reports of the officers who fought on these machines, you can read that they were able to incite German tanks from a distance of 2000 m, but ... they could not stop the German tanks!

But ... the cunning idea of ​​the French designers to create a "artillery cart" on the basis of an all-wheel drive car for free was not lost. The British, apparently acquainted with the French project, already in the war years created more powerful "tank hunters" also on the automobile chassis. Moreover, the British anti-tank SAU "Dikon" perfectly proved themselves in the course of the fighting in the territory of North Africa.