October 4 - Day of the Space Forces of Russia

From the text of the presidential decree from October 3 2002 of the year:
1. Amend the Decree of the President of the Russian Federation on December 10 1995 №1239 "On the establishment of the Strategic Missile Forces Day and the Day of the Military Space Forces" (Collection of the legislation of the Russian Federation, 1995, N 50, Art.4907), replacing the title and paragraph 2 the words "Military Space Forces" by the words "Space Forces".
2. This Decree shall enter into force on October 4 2002. 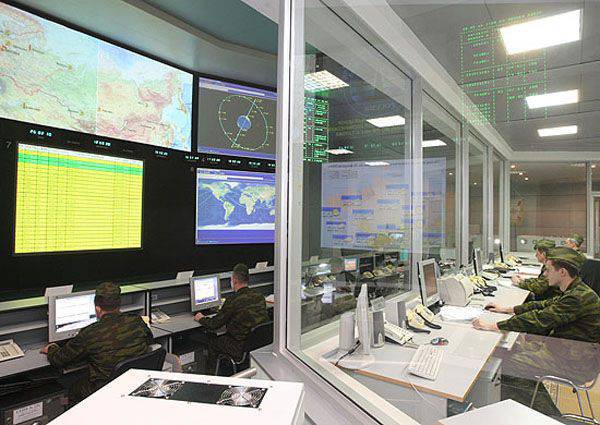 The decree came into force, and since then the servicemen of the Space Wax of the Russian Federation - a branch of the Russian Aerospace Forces - celebrate their own professional holiday.

The date of the celebration of the Day of the Space Forces is associated with the success of the Soviet cosmonautics. Speech on the date of the first artificial satellite of the Earth - 4 October 1957 year. Created by prominent Soviet scientists and designers Mstislav Keldysh, Mikhail Tikhonravov, Nikolai Lidorenko, of course, project leader Sergei Korolyov “Sputnik-1” (he is PS-1) became a real breakthrough. It was from this moment that the actual exploration of space began, and it was also the launch of the first artificial spacecraft that can be considered one of the starting points in the rivalry of superpowers in space.

The name of the PS-1 in the Soviet Union was decoded as "simplest satellite, ”however, this epithet by definition could not reflect the gigantic amount of work carried out by Soviet specialists: from the preparation of a memorandum by Mikhail Tihonravov about the need to start work on creating an“ unnatural ”(mid-50-s term) satellite the countries of Sergei Korolev that the satellite is not just scientific fun, but the highest scientific and technical achievement in terms of level and benefits; from the first mathematical calculations and drawing sketches of the satellite itself to the preparation of the P-7 ICBM, which 4 of October 1957 of the year brought the satellite to near-earth orbit. 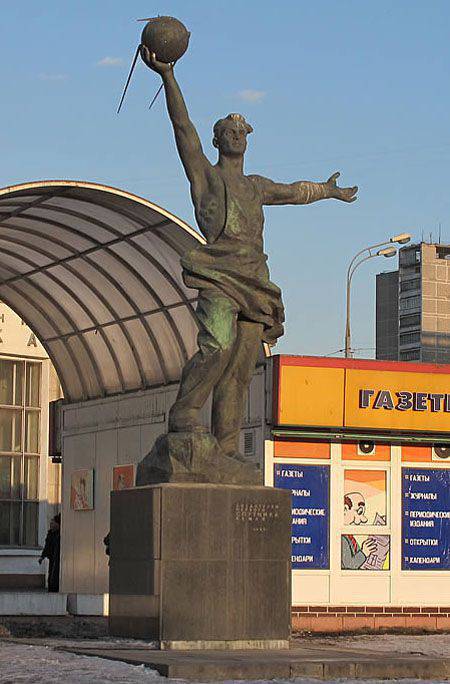 Moscow. Monument to the creators of the first AES

Pravda Newspaper 5 and 6 October 1957 published TASS messages:
As a result of the hard work of research institutes and design bureaus, the world's first artificial satellite was created. October 4 1957 of the year in the USSR produced the successful launch of the first satellite. According to preliminary data, the launch vehicle informed the satellite the required orbital speed of about 8000 meters per second. At present, the satellite describes elliptical trajectories around the Earth, and its flight can be observed in the rays of the rising and setting Sun using simple optical tools (binoculars, telescopes, etc.).

According to the calculations, which are now refined by direct observations, the satellite will move at altitudes up to 900 kilometers above the Earth's surface; the time of one complete revolution of the satellite will be 1 hour 35 minutes, the angle of inclination of the orbit to the equatorial plane is equal to 65 °. Over the area of ​​the city of Moscow 5 October 1957, the satellite will pass twice - in 1 hour 46 min. nights and 6 hour. 42 min. am Moscow time. Messages about the subsequent movement of the first artificial satellite launched in the USSR on October 4 will be broadcast regularly by broadcasting radio stations. 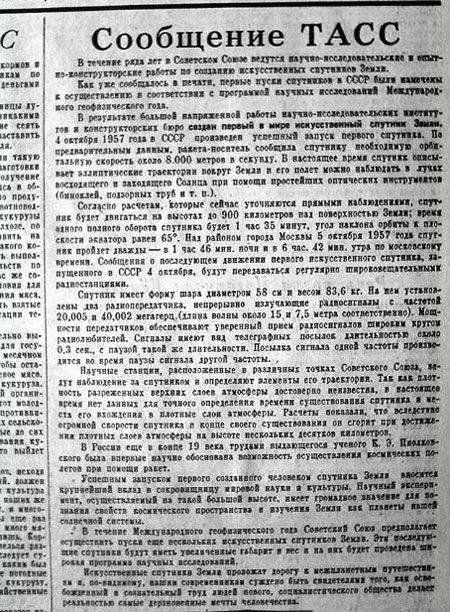 The significance of the success of the Soviet cosmonautics was not underestimated by foreign "partners". When in the West they learned about the launch of Sputnik-1, this fact created the effect of a bombshell. American newspapers came out with headlines that the Soviet Union was gaining a gigantic advantage over the United States, and the hottest heads among the American expert community tried to convince compatriots that the USSR was about to start bombarding the territory of the United States with nuclear warheads, which Moscow would supposedly “be equipped with Or has already equipped the satellite. The absence (for obvious reasons) of open (including scientific) information about Soviet development in the West only fueled paranoia. Apparently, the sound of a cheerful squeak of satellite transmitters forced the "partners" to draw in their imagination the terrible pictures of "Russian aggression."

Considering the fact that the States were also working on creating the satellite, the launch of the first satellite, namely the Soviet Union, was a blow to their image, as the Americans themselves say. Therefore, the work on creating our own satellite in the United States was not just continued, but was activated as much as possible. As a result, its first satellite (by the way, the word “satellite” itself was already firmly established not only in everyday speech, but also in explanatory dictionaries of a number of foreign countries - without translation). The US launched 1 February 1958 of the year. Speech about the satellite "Explorer-1", created in the scientific laboratory of Werner von Braun. It should be noted that the launch of Explorer 1 was preceded by failure to send another American satellite Vanguard 6.5in Satellite 1 into near-earth orbit - the satellite rocket exploded at launch on Cape Canaveral 1 in December 1957 of the year, which became an additional psychological blow for partners ".


By the time of the successful launch of the first American satellite, the Soviet “Sputnik-1” had already managed to make 1440 orbits around the Earth and descend from 4 in January 1958.

The creation of full-fledged space troops in the current understanding of these units and formations of the RF Armed Forces was far away, but by the time the first artificial satellite of the Earth was launched in the USSR, the first military units of space had already existed. Naturally, no adjectives of the “space” format for the troops then existed yet, but the fact remains that in connection with the start of construction of the Baikonur cosmodrome, such units were created as part of the artillery of the Reserve of the Supreme Command. It was the parts created in 1955 that took the most direct part in launching the rocket with the first satellite.

And in 1992 for the first time, the concept of “Military space forces” appears, and not only a concept appears, but also work is underway to form a kind of central subordination forces - videoconferencing (not to be confused with the current abbreviation today, which stands for Aerospace Forces).

Over the years of its existence, the Space Forces (under one name or another) have carried out hundreds of successful space launches, putting into orbit constellations of satellites for various purposes: from meteorological to reconnaissance. The Russian satellite group formed to this point allows for detailed monitoring of what is happening on Earth, to help the crews aviation, land and naval military-technical units with the determination of coordinates, target designation, with the search for effective ways to overcome certain obstacles along the route. Communication satellites launched by the Space Forces specialists make it possible to coordinate the work of individual military formations, increase the success of joint actions and achieve real success both in training and in combat activities.

"Military Review" congratulates servicemen of the Space Forces and service veterans on the holiday!