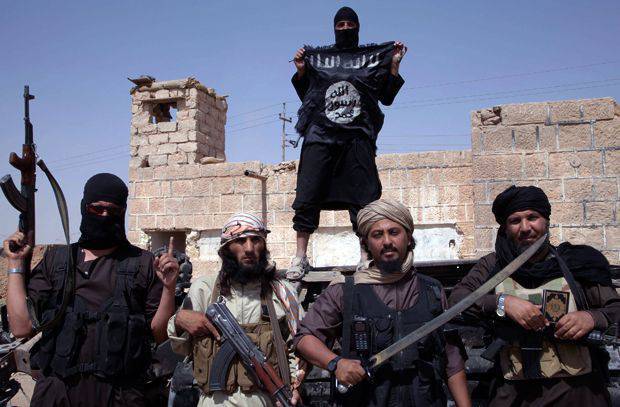 Experts believe that the "Islamic state" serves the interests of the national fascist circles of Western countries
The “Islamic State” and the fight against it, of course, became the main phenomenon of this year. He was also given the biggest place in the speech of world leaders at the 70, jubilee session of the UN General Assembly. It was not possible to develop a common position - the main geopolitical players insist on their vision of a solution to this problem. On the other hand, it is still not known for certain who is behind the appearance of this group and who will receive dividends from the confrontation with the neo-caliphate. Some experts believe that the black international of the national socialists and the social fascists with the hands of the “Islamic state” solves the world problem of revenge and a breakthrough into the new post-industrial world order.

According to the evaluation of the Academy of Development Management, among the participants of the General Assembly were those who were on the side of that new unrecognized state, which from 2013 began to build the World Caliphate, a Sunni theocracy with a Shariah form of government and terrorist practice. According to them, the “Islamic State”, which is fighting under the black banner of the war against liberalism, is nothing but the vanguard of the black international, whose goal is to regain lost ground as a result of defeat in World War II.

Interesting here are other findings of the Academy. According to them, the new antifascist coalition in the person of US President Barack Obama, Chinese President Xi Jinping and Russian President Vladimir Putin at the UN summit de facto declared war on a pseudochaliphate. However, the speeches of the leaders are multidirectional: the United States and the Russian Federation are opposite in their assessments of events in Ukraine and Syria, while China maintains prudent calm. Naturally, such a coalition cannot be effective, since goals and objectives can be completely different on each side. Such disunity can only be beneficial to the enemy, in whose ranks we can observe unity.

The main front, that is, the ground operation, can be led by Russia. Earlier, Sergei Lavrov voiced the need to create a broad coalition to defeat the Islamic State, Jabhat al-Nusra and their affiliated groups, but on the condition that it includes Syria, Iraq and Kurdish rebels. The minister is convinced that it is necessary to form a coalition of like-minded people, including those who are “on the ground” with weapons in the hands of confronting the terrorist threat. Iran had to join all this. And joined.

The day before, it was reported that the Russian Federation, the Syrian Arab Republic, the Republic of Iraq and the Islamic Republic of Iran decided to open an information center in Baghdad, which will include representatives of the general headquarters of these states. According to The New York Times, Washington is stunned by the news of the creation of an information center in Baghdad. They believe that in this way Russia, for the second time this month, strengthened its political and military influence in the Syrian conflict.

“This is another proof that Russian President Vladimir Putin has a completely different idea of ​​how to deal with the Islamic State than the Obama administration,” notes The New York Times.

As for the United States, which plays the role of an ally and is entrusted to open a second front, they will go for it only declaratively, as Barack Obama openly told listeners of the military academy of West Point. This is confirmed by the fact that the American military coalition, which includes about 50 countries, under the guise of fighting "neo-caliphate" pursues a policy of pressure on Iraq, Iran and Syria. In particular, a number of NATO member countries led by the United States are conducting an aerial campaign against grouping in the region. Only by a strange misunderstanding fall mainly on other objects - such, for example, as infrastructure and vital communications of Damascus.

According to the Academy of Development Management, the plan of the collision is to substitute Russia for defeat from the Black International, which is very likely in the face of tensions in two directions: in Ukraine and the Middle East. A defeat in the war is a coup d'état and the subsequent division of Russia into protectorates, which was stated in the plans of Barbarossa. And isn't it just that Moscow was actively involved in an operation against the “Islamic State”?

US Secretary of State John Kerry openly stated that the role of Russia in Syria is unenviable: “If we don’t find a way to unite to fight the IS, and Russia will fight with them alone, guess what will happen,” the Secretary of State suggested. “Russia,” Kerry argued, “will become a target. Russia will see - who knows - people with MANPADS, airplanes falling from the sky. They will begin to blacken. Together with Assad, they will become a new magnet for jihadists. ” 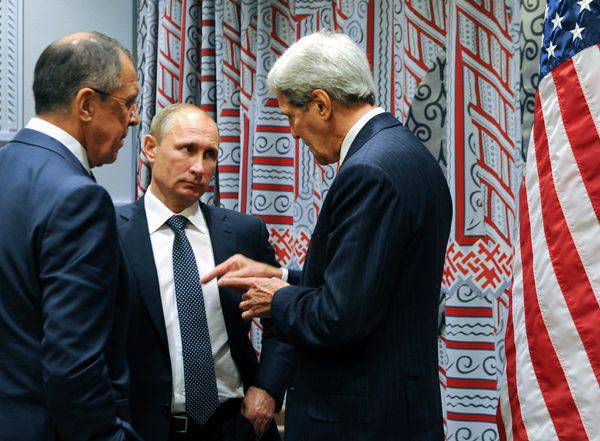 Sergey Lavrov, Vladimir Putin and John Kerry at the UN General Assembly session. Photo: Mikhail Klementyev / AP
However, a direct link between the United States and the Islamic State is no secret to anyone. Like the influence of the United States on the Ukrainian coup d'état, as a result of which the national-fascist junta came to power. But the influence of another closed structure, which has its own metaphysics, the semblance of religion and the concepts of revenge, is not so obvious: this is a black international, which includes reactionaries from political elites.

The connection of the black international with the "Islamic state" is obvious. After World War II, much of the Nazis settled in the Middle East, taking Muslim names. The Nazis also played an important role in the formation of intelligence services in Middle Eastern countries. The ears of the International stick out even in the context of the structure of the IG, it is largely molded, oddly enough, from the structure of the Imperial security of the Third Reich. The fact that in Ukraine behind the Nazi structures of the type of the “Right Sector” is a black international, is also quite obvious.

Will China and the Vatican benefit?

According to the Academy report, at the general breakfast of the leaders in the UN, the main actors were the presidents of the United States and Russia. But neither at the first table, nor in the hall were PRC Chairman Xi Jinping and Pope Francis seen. According to experts, this is symbolic, since it is China and the Vatican that will benefit from the declared war with the “caliphate”. Indeed, wise China, which speaks of the need to defeat the IS, will not fight itself.

“Flights of Russian aircraft over Damascus and cruising ships near the Syrian coast will not replace ground forces. The "humanitarian mission" of Russia in Ukraine, in Syria, opens the way to being involved in full-scale hostilities with the black international. And if you do not get involved, then ultimately neither Damascus, nor Donetsk can not be held due to the superiority in the mobilization resources of Sunni Islamists and Bandera over Alawite and militia. As for the black international "Muslim Brotherhood", which is going to rematch in the confrontation with the amoral international "fellow liberals", the conceptual foundations of the union of the old European aristocracy with the heirs of the Caliphate are hidden in the Vatican library, "said Andrei Devyatov, director of the Academy of Development Management.

About revanchists, closely associated with the secret orders and the largest financiers, has been known since Soviet times. Then it was given a wide publicity, which created obstacles to their activities throughout the world. Today, when the rules of the game have changed, the tasks formulated by the world behind the scenes remain unchanged: Russia should not be. Therefore, the issuance of a passport by the Vatican to the Nazis, the financing of Hitler's functionaries from the US federal treasury, or even the creation of an Arab monster in the form of an "Islamic state" fully fit into the concept of the black international. There is nothing surprising.

Ctrl Enter
Noticed oshЫbku Highlight text and press. Ctrl + Enter
We are
The US is preparing to dump paper dollars in order to enter Gesell’s money. Who will receive dividends from the new Bretton Woods?What you didn't want to know about England
Military Reviewin Yandex News
Military Reviewin Google News
34 comments
Information
Dear reader, to leave comments on the publication, you must to register.