November 2 2015
5
Inventor A.A. Porokhovshchikov became famous thanks to the project “Rover” - a tracked vehicle that could be armed with a machine gun and used in the armed forces. Nevertheless, it was not the only development Porokhovshchikov in the field of armored vehicles. Soon after the start of work on the “Rover”, the engineer developed and built an experienced armored car. For a number of reasons, this car is not as well known as its counterpart, but of great interest from the point of view stories and technology. In addition, interesting prerequisites for the emergence of this project.


The development of the Rover began in 1914 year. The prototype of this machine did not have any protection, however, according to some data, in the future it was planned to build an armored model, equipped with machine gun weapons. During the work on the project of the armored vehicle Porokhovshchikov ran into some problems and offered his own version of their solution.

In one of his letters, the designer noted that the existing types of armor steel are extremely difficult to process: they are not amenable to welding, and their strength makes it difficult even to drill small holes. In this regard, the inventor decided to create his own armor with sufficient protection characteristics, but less heavy and difficult to process.

In the spring of 1915, Porokhovshchikov offered the military department his own version of armor protection for vehicles. In his opinion, it was possible to abandon the use of existing armor steel. Instead, it was proposed to use the so-called. "Iron armor". In modern classification, such protection is referred to as combined booking. It is worth noting that the reservation architecture proposed by Porokhovshchikov became widespread only several decades later. Nevertheless, modern combined reservation systems are built on the basis of armor steel and other modern materials. 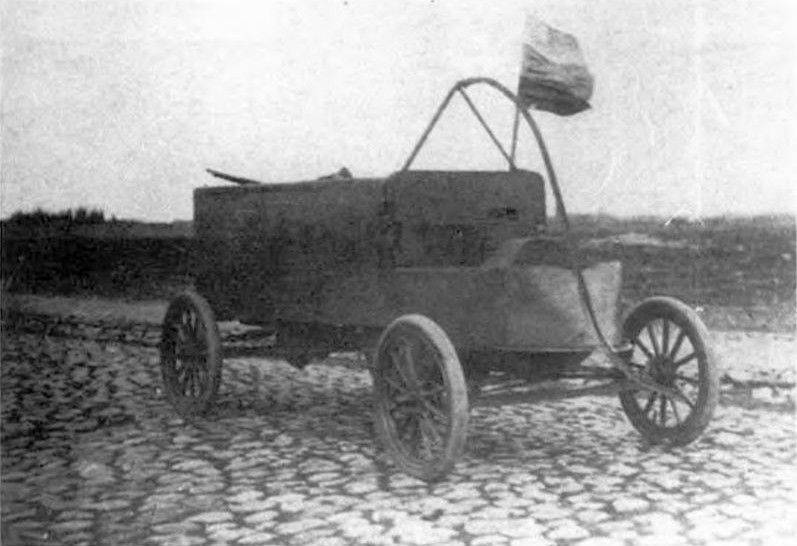 As the main element of the new armor, the designer suggested the usual sheet iron. The raw materials for the new armor were proposed to be processed using a special technology, the details of which the Powershakers decided to keep secret. Protection equipment was to consist of two iron sheets, between which should have a special pad of soft material. The inventor wrote that in the course of long experiments he managed to find the optimal material for such a gasket. Between the metal sheets should be placed blocks made from some "sea grass". Plants of a suitable variety were suggested to be dried, pressed and impregnated with a special compound. It was argued that the required raw materials can be found in any region of Russia.

According to Porokhovshchikov, the proposed “iron armor” was much easier to process than sheet steel. It could be bent, cut, drilled and welded without much difficulty or technological limitations. In addition, from the point of view of modern experience, we can assume that the original multipurpose combined armor should have good protection characteristics.

Perhaps in the future, "iron armor" could be used on a protected version of the machine "Rover". Nevertheless, it was decided to test it with the help of a different technique. Especially for testing the proposed combined protection of the Powders Coaters, he developed an armored car of the original design. It was planned to equip it with multi-layered armor and fire from the existing rifle weapons. In addition, in the future it was necessary to conduct running tests and determine the mobility of the machine. The successful completion of inspections could lead to the start of mass production of new armored vehicles and their subsequent delivery to the troops.

To check the booking, the Powers collectors received a Ford Model T car from the military. The engineer planned to remove all the extra parts from this machine and mount an armored hull built using new materials instead. In this configuration, the machine could hardly become a full-fledged combat armored car, however, it was possible to test new ideas and determine the feasibility of using them.

The passenger chassis with the 4x2 wheel formula was equipped with a hp 10,8 petrol engine. and had a dependent suspension with leaf springs. These characteristics of the engine did not allow to count on the high mobility of the machine, but this did not matter because of the experimental nature of the project.

An armored hull of the original design assembled from Porokhovshchikov's “iron armor” was mounted on the base chassis. The body was assembled from external sheets of boiler iron 4,5 mm thick and internal 3,5 mm parts. Between the two layers of metal was placed a strip of treated pressed sea grass. As in the case with other armored cars of that time, built on the basis of the existing chassis, the hull was divided into the engine compartment and manned volume.

Since Porokhovshchikov’s armored car was not only an experimental machine, but also a demonstrator of promising technology, the corps received the appropriate lines. Thus, the engine of the car was covered with a curved part that served as frontal and onboard protection. In this case, the front of this part was bent back, demonstrating the possibility of easy metal processing. Above the engine and radiator there was a small roof of "iron armor". A curved rail was installed on the inclined frontal part to overcome the wire obstacles. The rail had to lift the wire over the machine and pass it over the body.

The habitable compartment of the hull consisted of several blocks of combined armor and had a pentagonal shape with elongated sides and two slanted stern sheets. In front of the habitable compartment, a frontal sheet was provided with a “lifting visor” covering the driver's access hatch. With the hatch closed, the driver could follow the road through a small hole in the visor. The body of the machine along the entire length had the same rectangular section. Behind were two blocks of armor, forming a wedge-shaped stern.

The car was not equipped with a roof, which was due to its specific purpose, the lack of the need for such a unit and an insufficiently powerful motor. In addition, it was proposed to get into the car through the board. Doors in the sides were not provided. The proposed method of landing contributed to the small height of the hull. The board had a height of no more than 795 mm.

Assembling an experimental armored vehicle designed by A.A. Porokhovshchikova ended at the beginning of the summer of 1915. 14 June car submitted to the commission of the military department headed by Colonel Poklevsky-Kozello. Experts examined the car and made certain conclusions. In addition, in the presence of representatives of the army, test shelling of the corps took place with the use of various small arms.

In the future, cars equipped with “iron armor” could get to the front and fight with the Austrian or German army. For this reason, in the tests decided to use enemy weapons. The body of the armored car fired from rifles Mauser 98 and Steyr Mannlicher M1895. In addition, the car was checked for bullet resistance of the Nagan revolver and the Browning pistol. The fire was fired from a distance of 50 steps (about 35 m). Multi-layered armor performed well. Despite the absence of full-fledged armor steel, the body withstood all hits. None of the bullets could penetrate all three layers of the combined protection. 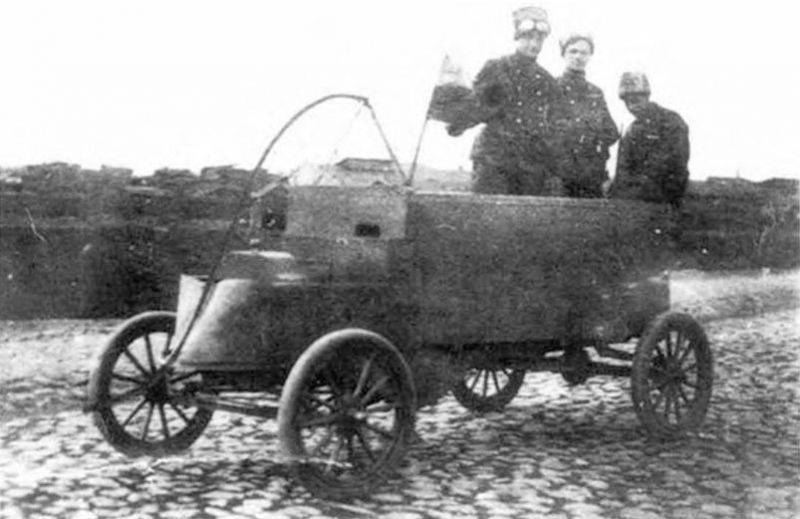 For some reason, Porokhovshchikov’s armored car underwent abbreviated tests. Because of this, in particular, the mass of the armored hull and the vehicle as a whole remained unknown. In addition, it was decided to abandon the sea trials. The exact characteristics of mobility have not been determined. According to the author of the project, in the future the car ran in for two months. An armored car with a load in the form of a driver and three passengers traveled along various roads. These tests, according to Porokhovshchikov, ended without damage or malfunction of the chassis. The engine also passed all the tests.

Armored car A.A. Porokhovshchikov based on the chassis "Ford" was intended solely to test the new technology. Tests of this machine continued until the end of the summer, after which the inventor returned to his other projects. So, in October 1915, he presented an updated version of the "iron armor". At this time, a design was proposed with three layers of boiler iron 4, 2 and 4 mm thick, between which there were two strips of pressed sea grass.

The Commission of the Main Military Technical Directorate familiarized itself with such armor and rendered its verdict. In terms of protection, it exceeded 5-mm armored steel. Nevertheless, the multi-layer protection seriously lost armor by weight and was notable for its large volume. In addition, the military conducted a curious experiment that questioned all previous work. One of the multi-layer bags was assembled, replacing the grass pads with felt pads. The characteristics of the reservation did not change. According to the results of testing the next version of the "iron armor", it was decided to abandon further work in this direction.

Later, the inventor repeatedly tried to offer his armor to the military. In his opinion, it should be used in the construction of armored cars and armored trains. However, the military department was not interested in this proposal, which is why the Powdersmen over time stopped sending letters about their invention.

It should be noted, Powders was not going to use the "iron armor" in the design of the machine "Rover". Confirmation of the existence of such plans are missing. Thus, we can conclude that the development of a promising tracked vehicle and easy-to-make armor was carried out in parallel, without a direct link between the projects.

During the 1914-17 years of AA Porokhovshchikov worked on three projects in the field of land technology. He developed a tracked "Rover", a prototype of an armored car, as well as special armor, which in theory could be used on a similar technique. However, none of the three projects went beyond the testing of prototypes. All the proposed development had some or other shortcomings that blocked their path to the troops. In addition, we should not forget that the draft armored car was created solely for experimental purposes.