Announced the station of visual and optical interference "Grach"

October 5 2015
12
Shortly before the next Innovation Days of the Ministry of Defense, domestic industry began to announce its new developments. For example, the United Instrument-Making Corporation for the first time talked about its new project for the Grach visual-optical interference station. This system is proposed for use on naval ships. fleet, it is designed to counter the optoelectronic systems of the enemy and other equipment operating in various spectra.


The product "Grach" is developed by the experimental plant "Integral" (St. Petersburg). This system is designed to protect the ships of the Navy at dusk and at night. With the help of high-intensity light radiation, such equipment should “blind” the enemy's detection systems, making it difficult to monitor the situation and making it difficult to take the necessary measures. Due to the small size, the station “Grach” can be used on ships of various types, which expands the scope of its application.

According to the United Instrument Engineering Corporation, the Grach shipborne visual-optical jamming station can be mounted on 2 surface ships of rank. So, the carriers of this system can be destroyers, large anti-submarine ships, landing ships and hovercraft or hydrofoil. It is also possible to install the station on boats of various types. Thus, in its present form, the proposed device can be used on a large number of existing and prospective Navy ships. 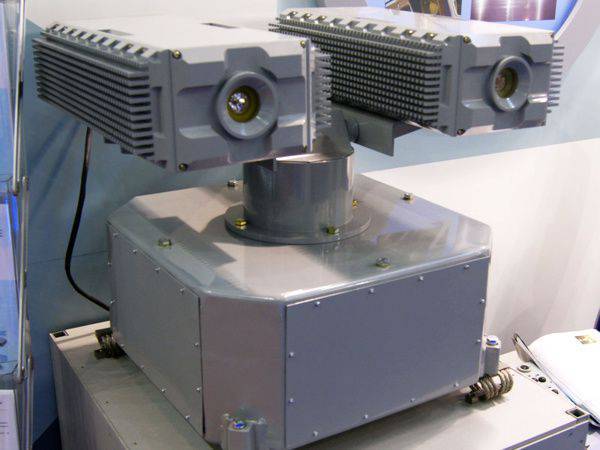 The appearance of the proposed system is known. The station "Grach" consists of a support unit, a rotator with systems of horizontal and vertical pickup, as well as two blocks with optical emitters. This architecture of the complex allows you to mount it without serious restrictions in the requirements for the carrier ship, and also provides the maximum possible characteristics. In particular, guidance systems allow you to “attack” a specific target, directing a powerful beam of light at it.

To counter the enemy's optical-electronic systems, the Grach station uses high-intensity light radiation. The power of the emitters is such that it allows you to suppress the optical systems of the enemy, making it difficult or impossible to observe the situation. In addition, the system may temporarily blind the enemy personnel with the same result.

In order to expand the spectrum of suppressed systems, the advanced station “Grach” has multi-spectral radiators. They are able to interfere in the ultraviolet, visible and infrared ranges. Thus, the suppression of both television systems and thermal imagers or other optical-electronic equipment used to detect targets is provided.

In addition to the guidance systems, the Grach station receives instruments for changing the width of the beam. With the help of such equipment, the station is able to work on a small-sized target, without wasting power on the illumination of surrounding objects.

It is noted that the station noise "Grach" shows the greatest efficiency at dusk and at night. In such conditions, the action of the bright beam is enhanced by the absence of a powerful source of background lighting in the form of the sun. As a result, the blinding of enemy devices is performed with increased efficiency.

If necessary, the interference station can be used not only for its intended purpose. According to the developer, this system is able to perform the functions of a powerful searchlight to illuminate water areas. In addition, it is possible to work in the mode of transmission of light-signal messages. In the latter case, the communication range is limited only by meteorological conditions.

Deputy Director General of the United Instrument-Making Corporation Sergey Skokov notes that the proposed station of visual-optical interference is capable of protecting vessels and personnel performing combat missions off the coast or on the high seas. According to the specialist, the station "Grach" is a powerful weaponssuitable for defensive and offensive tasks. At the same time, a promising system turns out to be a non-lethal weapon.

At the moment, the station "Grach" is a unique development. According to S. Skokov, foreign systems of this class are unknown. Probably, in foreign countries such equipment is simply not available. Thus, the promising system of visual and optical interference has a high potential, including from the point of view of export deliveries. Due to the absence of competitors, Grach may be of interest to foreign customers and occupy a niche in the market.

First of all, such equipment should be of interest to the naval forces, which need modern means of protecting ships and personnel. In addition, the list of potential customers can be replenished by border guards and the coast guard. In their case, the “Grach” system will be used for “offensive” purposes, in order to more effectively intercept offenders. Also, a jammer station can be useful when conducting operations against sea pirates.

At the very beginning of October, the developers of the “Grach” project published a photo of a promising station for visual and optical interference. A full-fledged "premiere" of this development was scheduled for October 5-6. Together with other new developments in the field of weapons and instrument engineering, the Grach station is demonstrated at the exhibition Innovation Day of the Ministry of Defense in Kubinka.

We are in Yandex Zen
Nordic Defense Innovations (part of 1)
The system of optical-electronic surveillance (ESR) border guard service of Ukraine
12 comments
Information
Dear reader, to leave comments on the publication, you must to register.