October 5 2015
36
About Donald Trump, even Forbes writes that this billionaire does not hesitate to “distort the facts,” and this helps him in business and in politics. In our opinion, Trump distorts not only “facts”. He also manipulates his election program. About a month ago, when the theme of unfortunate refugees was in fashion, he argued that the United States should accept migrants from Syria “on a humanitarian basis”. Now this person declares that if elected to the presidency, he will send Syrian refugees from the United States. Today, Trump says that "this is not a problem," if the Russians want to hit the "IG", but what will he say tomorrow? 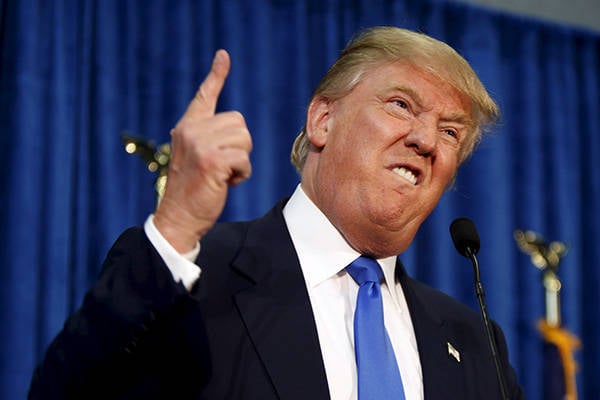 "The scandalous billionaire always overstated the size of his condition and did not hesitate to distort the facts," the magazine writes "Forbes". - At first it helped him in business. Now - in politics. ”

Trump claims, indicates the publication, that his assets are worth at least 10 billion dollars. However, after interviewing more than eight dozen sources and using “unprecedented resources” for the assessment, journalists determined the total of Trump’s assets in 4,5 billion. Nevertheless Mr. Trump said: “I’m running for president. And I stand much more than you think. Honestly, it's just ugly. I think I look better if I stand 10 billion dollars, than if I stand 4 billion dollars. "

The information of the super popular magazine was previously taken by the businessman in hostility. In the late eighties of the last century, he published an essay in the Los Angeles Times entitled Forbes Announced Vendetta. The rich man accused the editors of “deliberately distorting” the facts in order to destroy his reputation. And in an interview with ABC, Trump said: “Forbes has been hunting me for years, personally. They make every possible effort to show me in the worst light. " “Even after years of 25, the stubborn billionaire doesn’t want to apologize for those words,” the publication writes today. “But he admits the obvious: he used to juggle the facts.”

Is it possible to extrapolate, let's say, the properties of Trump's nature to politics? It seems to us, and not “Forbes”, completely. The political Olympus in general is “inhabited” by far from the best people (remember the journalism of Leo Tolstoy), and the craving of the rulers to lie has long become a byword. Why, in fact, repeatedly caught on the “juggling” of Trump should be somewhat different from Hillary Clinton, her husband Bill or George W. Bush, who himself hardly understood what he said?

9 september israeli "9 channel"referring to “The Independent,” conveyed a shocking statement from Donald Trump. By participating in the popular O'Reilly Factor television program, the billionaire told the public that Obama's “red line” was a line in the sand. Therefore, the United States should ... accept refugees from Syria.

“I hate this concept, but we need to accept them on a humanitarian basis,” the Israeli newspaper quoted him as saying. Trump recalled in a telecast that President B.H. Obama in 2013 had a “red line” about Bashar al-Assad’s activities in Syria. But the devil remained a devil: “It began with President Obama, when he did not do what he had to do, but instead outlined a devil on the sand that turned out to be more than artificial. But you know that living in Syria now means living in hell. There is no doubt about it. They live in hell, and something must be done. "

So, take the refugees from Syria. Recall that about a month ago the topic of unfortunate refugees was in fashion: they were much written about in the USA and in the European Union. Today, the “Islamic state” has entered the “trend” partly because of the UN General Assembly, where the speakers focused on the topic of world terrorism, partly because Russia has become more active in Syria. And what does Trump say?

It turns out that this contender for the nomination of a candidate for the presidency of the United States, speaking in New Hampshire, said that if elected, he would send thousands of Syrian refugees out of the country. “I warn people who come here from Syria as part of this mass migration. If I win, they will go back, ”he said. "BBC".

What is the argument? The billionaire explained that the United States should not accept thousands of people who may be associated with the Islamic State.

Such a sharp statement appeared as a kind of antithesis to the government program, voiced earlier by Secretary of State John Kerry. He said that in the next two years, the United States will receive a significantly larger number of migrants from around the world: up to 85 thousands next year and up to 100 thousands in 2017, notes Bi-Bi-si.

Apparently, let us add on our own, any program is suitable for Trump, so long as it goes against the plans of the current administration of the White House.

In August, Mr. Trump told 2015 to potential voters that he would get along with Putin, and he would respect him. He reported this in an interview with CNN. Donald trump сказал: “He will respect me. I assure you.

Such statements Trump made this year and earlier. For example, talking to journalists in Scotland, the billionaire promised, if he won the presidential elections in the United States, "get on well with Vladimir Putin."

At the end of September, Trump's "worldview" shifted somewhat. It seems that he is no longer eager to “get on” with Putin.

The same Donald Trump, who this summer was ready to "make friends" with Putin, now pretends to be "macho." According to the billionaire, B.H. Obama does not help Ukraine enough, which has to defend itself against the military offensive of the Russian-supported rebels. “Our president is weak; all that we hear today is empty words, - said he, speaking as a videoconference at the Kiev forum "Yalta European Strategy." “Part of the problem for Ukraine and the United States is that Putin does not respect our president at all.”

This is an obvious hint that Trump would have behaved in a Ukrainian crisis differently than Obama. Apparently, he would “help” Kiev and force Putin to “respect” himself.

In this case, he would hardly have gotten along with Putin. We should not forget that Trump is from the camp of the Republicans, and many representatives of this party (for example, the famous “hawk” McCain) are friends with the bosses of the American military-industrial complex, they rush to arm Kiev and force on the “Russian invaders” with the hands of the Ukrainian “fighters for freedom and independence".

The other day, Trump gave an exclusive interview to the TV channel CNNin which he openly supported the efforts of Moscow and Tehran in the fight against the “Islamic State” in Syria. According to the billionaire, Russia should be allowed to "deal with the" IG ".

As in previous cases, he went on to criticize the current administration of the White House. A potential US presidential candidate asked the question: “Why are we opposing IG and at the same time against Assad?” Then he tried to separate the duties of Russia and the American coalition: “Let Syria and IG fight, let Russia take care of IG. And we (the United States and their coalition allies. - O. Ch.) Can fight the "IS" in Iraq. "

Also, the billionaire criticized the policy of the American administration, aimed at replacing regimes objectionable to Washington: “Some want us to come and replace Assad. We (USA. - O. Ch.) Always stand on the side of those people who later turn out to be worse than the previous ones. ”

We talked about President Asad. The host of the program asked whether Bashar Assad is true - the source of the troubles of Syria? Trump replied that he doubted that. It is impossible to say with absolute certainty that Assad is to blame for the misfortunes of the people of Syria.

But then there was another statement Trump about Assad.

The billionaire called the president of Syria the “bad guy” who killed hundreds of thousands of people. In addition, notes "Correspondent.net"Trump said that Russia "is probably trying to support Assad and help him."

So, Assad is now definitely "bad," and Russia is "trying to support him." Draw your own conclusions, comrades.

Finally, a businessman stated reminds "Free press"that the US should not strive to be a "world policeman."

We think that this unusual statement to the American public, which downgrades the international role of the United States, is also addressed to the current White House administration. The election program is convenient to build on solid antitheses to the previous president. This is the easiest way to win the favor of close-up voters who do not understand that words are one thing, and deeds are quite another. Obama's rating is low, and on the "bold" criticism of the misses of the current president, you can quickly earn political points.

Yes, only Trump's words, as we were convinced (and as “Forbes” was convinced), are worth pennies.

Especially as in the last statement there is a contradiction.

A month and a half ago, Donald Trump said the public about their desire to revive the "great" America. With this slogan of greatness, he is preparing to go to the polls.

It will not be easy for Trump to explain to the American public how the States will prove their "greatness" to the world by abandoning the role of "world policeman." The voters, of course, will not swallow much, but the MIC dealers, accustomed to American wars all over the world and big profits, prefer to chew and then swallow.

And yet worry about the fate of Trump is not necessary. If he becomes president, he will behave just like the Nobel peacemaker Obama. It is possible for two presidential terms of years to close the prison in Guantanamo - and never close it. And just as four years or eight years can linger about the refusal of the role of "world policeman" and continue to be.

Ctrl Enter
Noticed a mistake Highlight text and press. Ctrl + Enter
We are
Overseas ally? Donald Trump - US Presidential CandidateProjection of force
36 comments
Information
Dear reader, to leave comments on the publication, you must to register.