October 5 2015
33
Recently, rumors about the holding of a referendum on the accession of LDNR to Russia are intensely circulating. Recently, we have seen a lot of materials about the achievements of these republics. But there are also materials showing that not everything is clean and smooth.


Ask: what's the matter of the terrorist act in Torez?

Honestly, we were interested in this incident, as the incidents with Bednov and Brain were interested. And we decided to analyze the materials that fell into our hands.

Unlike the previous two analyzes, this time we have put together a slightly larger company than in previous investigations. The tanker, the anti-aircraft gunner, the scout, the driver-mechanic of the MT-LB, however, are not equipped with air defense, air gunner. And two people who were present that day at the training ground. One of which a long time ago, but graduated from Kharkov tank. The company is quite motley, that is, versatile.

Photographic materials obtained from official sources were used. Some pictures were shown by the prosecutor's office of the DPR, some are not. But at our disposal were.

The conclusions we made are somewhat different from those voiced by the official structures of the DPR.

So, what was announced by the investigating authorities.

1. In the Strela-10 air defense system on the basis of MT-LB, unidentified persons put an unshelled explosive device of an unidentified type, equivalent to 200 grams of TNT, by unknown persons.

2. The explosive device was activated, an explosion occurred and a fire started causing human casualties.

The overall picture is clear. The only thing that complicates the whole thing a little is the complete lack of information. But something still leaked. 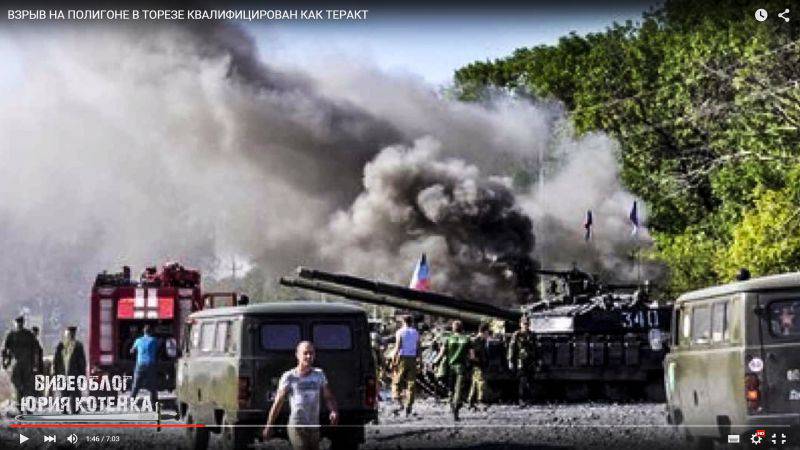 Here is a video from the scene. You can see everything and evaluate how much the security measures were observed at the competitions (two of us were on the tank biathlon in Moscow, we had something to compare with), and how the technology exhibition was held.

Our "Arrow" can be watched from 4 minutes. Note the closed LEFT rear hatch. We will return to it later.

1. Our two eyewitnesses, and several who published their observations on the network that day, did not hear the explosion. One of the witnesses watched a bright flash, being in 10-12 meters from the vehicle (near tank No.340), the second was somewhat further and reacted only when smoke came out of the conveyor and people rushed to the side of the vehicle.

Question: why no one heard the explosion?

200 grams of TNT do not explode silently in any equivalent. Moreover, an explosion inside such a box as a “motolab” is not even 200, but 100 grams of TNT or something equivalent, all inside would be smeared on the walls. We are not even talking about contusions, it is obvious.

Further, looking at the photos, we found several inconsistencies. 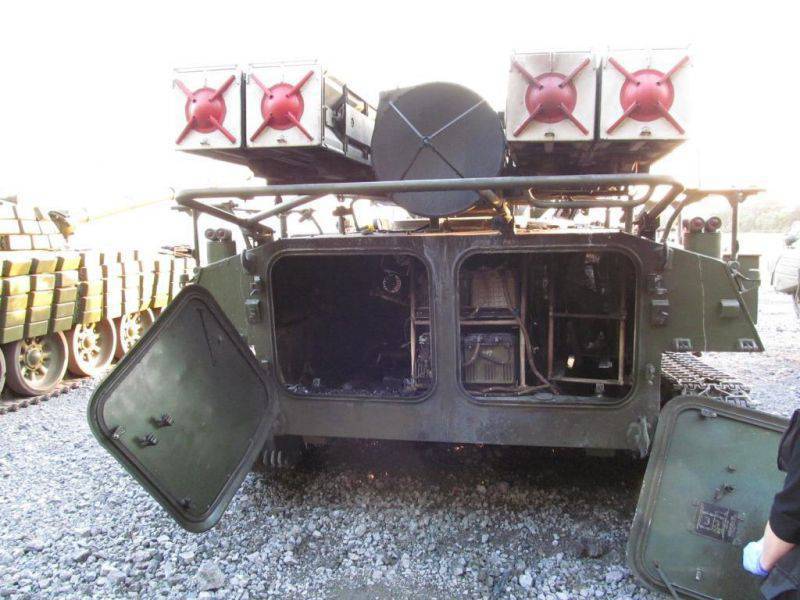 Here we must pay attention to the lack of a left rack for rockets. First we decided that the rack was dismantled (torn out) during the fire extinguishing. However, the second photo shows that the rack was dismantled in advance. This is indicated by the fasteners circled in yellow circles, into which the fastening bolts are screwed. In order not to lose. We will need this fact at the very end. 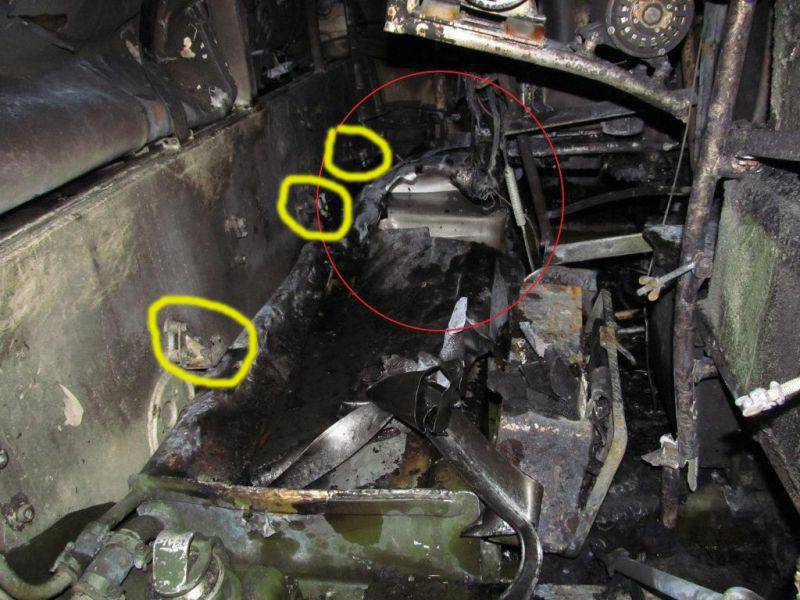 We pay general attention to the fact that the doors of the hatches are absolutely not smoked. That is, it burned closer to the center of the car, and the smoke, quite obviously, went through the working compartment. And the open (judging by the video) right wing played the role of a blower.

Why, by the way, it took her to tear off - is not entirely clear. 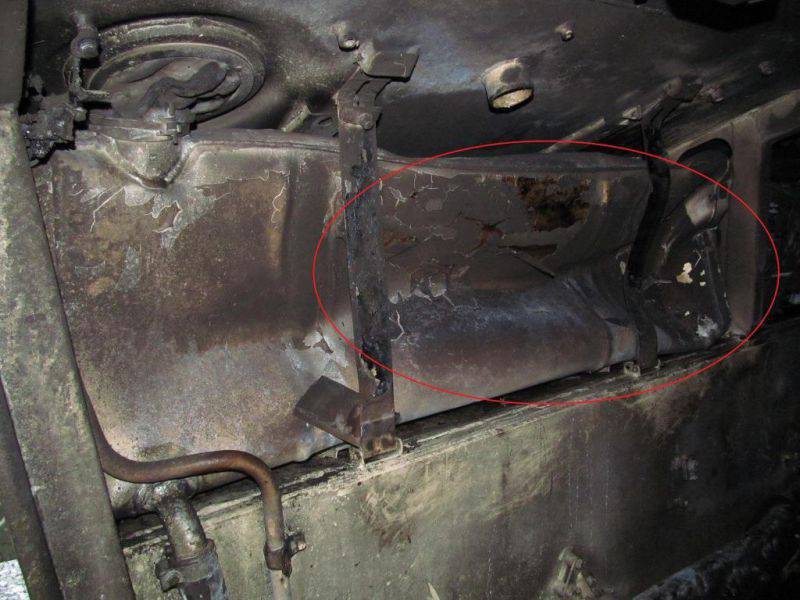 Here is a collapsed fuel tank on the left wall. His condition indicates that he was empty. From here, two versions of his state: they could detonate diesel fumes from heating (she knows how), or from the fact that when it was extinguished it was poured abundantly with water. The second option is more doubtful, since no traces of strong heating are observed on it. But - could and wash away a stream.

The second neponyatka - this is the state of the mounting plates. One looks as if nothing happened to her, the second - see for yourself. Accurately repeats the contour of a crumpled tank.

More plausible after all the first option. There was a sharp and strong heat, as a result of which the tank collapsed. And they were helped by the couples who were still inside. 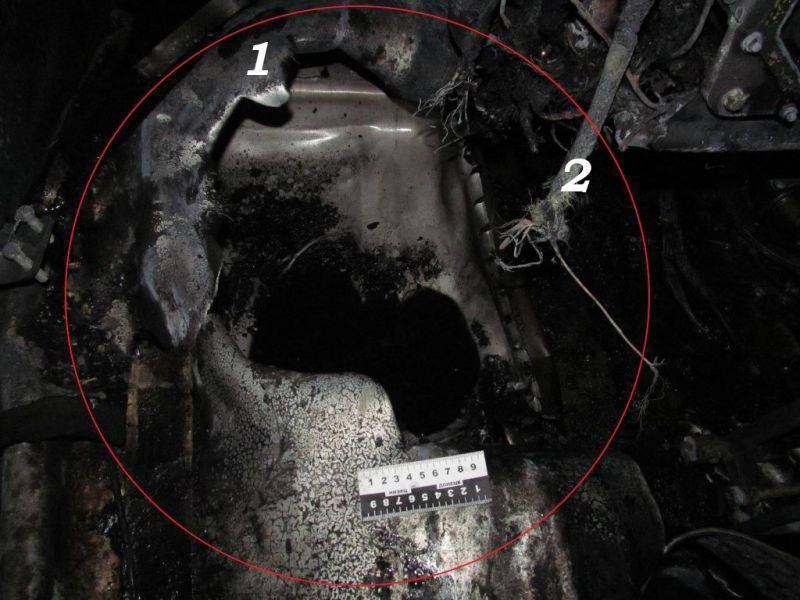 Here is a photograph that the investigating authorities openly showed as evidence. As a place of explosion / fire. On the aluminum or duralumin parts visible traces of burning of a high-temperature composition. And it seems that the item was melted. The place can claim to be considered the epicenter of fire.

In the photo, we marked with figures two noticeable details: the edge of the damaged casing with a characteristic tooth and a broken hose. Go to the next picture. Main in our chain of reasoning. 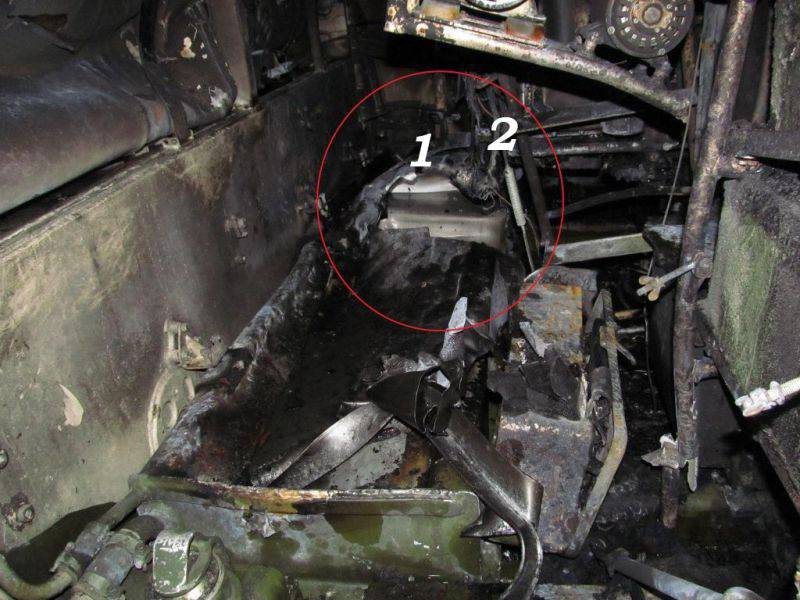 This picture was taken EARLY than the previous one. This can be identified by the presence of a rack and tie on the 2 numeral. In the previous figure, these details are missing.

We look at the item under the numbers. There are no traces of fire on it. And the hole is missing.

In principle, this would be the end of our investigation. It is already clear that there was no diversion, something completely different happened. But the leadership of the DNR in the face of a heap of responsible persons is trying to simply impose its version of the "terrorist attack." If simply - they lie.

There was no act of terrorism. There were no saboteurs or traitors willing to commit meanness. This version is good, but does not stand up to scrutiny from our specialist in similar operations. His opinion is this: if there was a need to arrange a rally of such a plan, he would have mined in no way the Arrow exhibition, which definitely would not have ammunition. And one of the spare tanks. Calculated if not on the BC, then on the fully filled tanks. Yes, diesel fuel is not gasoline, but if it is set on fire, there will be no less problems with extinguishing. And how well detonating couples, even not to tell.

So what happened at the landfill in Torez?

In our general opinion, everything is simple.

The crew of the car was instructed to exhibit its complex at the exhibition. Preparing accordingly. That is, removing the BC and all the excess.

Any crew has things that "live" in the car. Since it is not known when they can be needed. Spare parts, spare parts, consumables. And, since the DPR is not a place where you can just pick up and leave the acquired in the park, the crew made the next knight's move.

The calculation dismantled the rack under the rocket on the left side of the machine. Why left? It's simple again. On the right side there is a passage in the technical compartment. Narrow and uncomfortable. Behind the workplace of one of the operators. It is designed to get into the technical compartment for the repair of antenna drives and launchers. Occupation is sad because there really is no place.

Further, the crew dumped on the formed area all that they did not want to leave in the park. Solely because surely someone would find someone who could use these things. Everything is logical and reasonable.

Then the left hatch for loading the BC was secured, and the car got up to the exhibition.

All would be nothing, but most of the people who wanted to climb the exhibition were children. The first video shows everything. And how they stuck to the "Arrow" too. And how they pulled and twisted everything they could reach.

What was in that compartment, of course, we will not know. But we think that the culprit of the fire, which created such a high temperature, was a rocket. Either signal or lighting. Both of them are able, with a quiet sound, to create a huge temperature around them and set fire to even that which cannot burn.

How did it work? The answer is on the surface. There are several versions, but what's the use of them? Ksenia did not return the dead.

The conclusions that suggested themselves from the very beginning: who is to blame?

Here is our personal opinion of two people who have visited more than one event of this nature.

Security measures were absent. This is understandable, in the republic, which recently waged a full-fledged war, the attitude towards arms and military equipment is somewhat different than in Russia. If it is right - it is often sloppy.

If we take as an example the exhibition at "Army-2015", so there on those samples that could be climbed, everything that could cause even the slightest harm was twisted and screwed. Including, by the way, and batteries. And here - fine. On the cannon, the sight was wrapped in a bag — and that's enough. And we shot.

Carrying out activities of a similar nature should be carried out by intelligent and trained personnel. Exactly to avoid. And not yesterday's fighters, who the day before were miners and entrepreneurs. This is not a toy, it is a military equipment.

The main culprit of this incident, if we take by analogy with Russia - Mr. Zakharchenko. It was he who allowed his subordinates to show that "we, too, can, no worse than in Russia." You can not, and still can not be very long.

Of course, the search for saboteurs will be conducted. And the guilty will be punished. That's just hardly those who should be punished. And it is necessary to punish two absolutely incompetent superiors, on whose conscience the death of a child. Not from the Ukrainian shell. From stupidity and excessive arrogance.

Then one author from the DPR lamented, they say, at the opening of 4 000 was, and then it came less in 10. Apparently, the Pitmen realized that it is better to stay away from sin and to miss such a show. You look, really saboteurs or traitors will undermine the tank. And then what?

So that this "then" did not come, and the tower from the tank did not arrive in the spectator, we must adopt the words of Vladimir Ulyanov-Lenin, who said: "Our slogan must be one - to learn military science in this way, introduce order on the railways ".

Well, with the railways is another matter, but you need to learn military affairs. And begin to restore order in the republic.