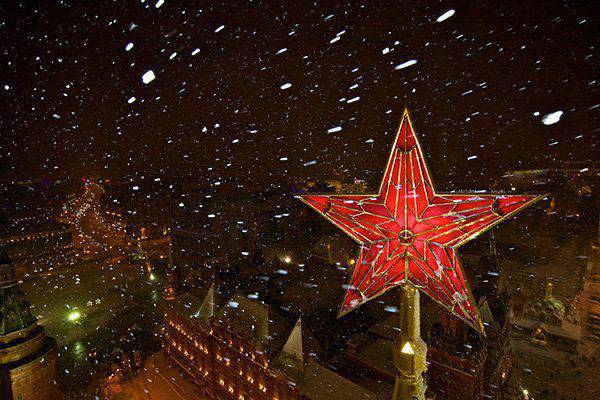 Judging by the documents, for the first time the two-headed eagle was placed on the high tent of the Spasskaya Tower as early as the kingdom of Tsar Alexei Mikhailovich Tishayshy - Father Peter I. It is worth bearing in mind that originally the Kremlin towers did not have tent roofs and upper decorative tiers: they carried a purely utilitarian fortification function and there were no decorations above the upper battle ground. But already in the 1624 year, during the reign of Tsar Mikhail Fedorovich, the Spasskaya Tower was built on to install a clock mechanism; The construction work, including the installation and adjustment of the chiming clock, was carried out by the English master Christopher Galloway. And with the next king on the top of the tent of the stone superstructure of the Spasskaya Tower appears the emblem of the Russian state - a two-headed eagle. Alas, its appearance and description are not preserved.

By the beginning of the XIX century, the eagles were adorned already on the Spasskaya, Nikolskaya, Troitskaya and Borovitskaya travel towers. However, the latter were built gradually, therefore, approximately once a century, the eagles on the towers were changed. Sometimes it happened more often, and not only because of disrepair. The Kremlin, like the rest of Moscow, often burned. In the fires burned down the internal wooden tiers, stairs. Often the fire did not spare the spiers of the towers. So, judging from the inventories, one Kremlin eagle was "destroyed" during the terrible "Trinity" 1737 fire of the year.

As a result, by the beginning of the twentieth century, four eagles, set at different times, made by different craftsmen and distinctly different from each other, soared over Moscow. The oldest was an eagle crowning the Trinity Tower. It was installed in the 1870 year and consisted of separate parts. When mounting it was collected directly on the tent spire. And in the 1935 year, when the decision was implemented to replace the "old-mode" characters with five-pointed stars, it was the only eagle that could not be removed entirely, but had to be disassembled at the top of the spire.

The last renewal of the imperial eagles took place in 1896, and was timed to coincide with the holy wedding ceremony of the last Russian emperor Nicholas II.

They tried to change the symbol of the Russian empire for the symbol of the new Soviet power several times. In the years of the civil war, the chairman of the Council of People's Commissars V.I. Lenin. However, in conditions of total economic collapse, the wish of the leader of the revolution was not fulfilled. And only 23 August 1935, the decision of the Council of People's Commissars and the Central Committee of the CPSU (b) to replace the old characters with new ones. Immediately after this, a TASS message was issued, informing the Soviet people: "... on 7 in November 1935 to remove the 4 eagle on the towers of the Kremlin wall and the 2 eagle from the building of the Historical Museum. By the same date, it was decided to install five-pointed on the Kremlin towers the stars with the sickle and the hammer. "

At the same time, it was decided to show new stars to Muscovites: the show was held in October in the Park of Culture and Rest. Gorky. Moreover, after the dismantling of 18 in October of the old imperial symbols, they were also presented in the 23 park of October for public display. And the very next day, a metal star with crossed sickle and hammer, decorated with Ural gems, was raised to the Spasskaya Tower. The whole operation took less than an hour: the beginning of the climb in 12.40, the installation on a special wind vane mechanism in 13.30.

On October 25, the same operation was repeated on the Trinity Tower, and by 27, the stars were hoisted on Nikolskaya and Borovitskaya.

The design and manufacture of new Kremlin symbols was entrusted to the Central Aero-Hydrodynamic Institute. Professor N.E. Zhukovsky with the participation of two Moscow defense plants. Sketches claimed I.V. Stalin. Interestingly, the first stars were visually different from each other. Thus, the rays of the Trinity Star were decorated with ears. For Borovitskaya tower produced a double star. The most modest was a star on the Nikolskaya Tower, the rays of which were made of polished metal.

Nikolskaya star (along with Spasskaya) turned out to be the biggest. The distance between the beams was 4,5 meters. The weight of the steel bearing frame, lined with metal sheets and decorated with Ural stones, reached tons. The design was a steel frame made of stainless steel, sheathed with sheets of red copper and covered with gold leaf. Ural gems and semiprecious stones such as alexandrites, amethysts, rock crystal, topazes, aquamarines, etc. were installed into the frame.

However, the new characters was prepared for a short century. Already the first two winters showed that due to the aggressive influence of Moscow rains and snow, both the Ural gems and gold leaf covering metal parts faded. In addition, the stars were disproportionately large, which was not revealed at the design stage. After their installation, it became immediately clear: visually, the characters are absolutely not in harmony with the slender tents of the Kremlin towers. Stars literally suppressed the architectural ensemble of the Moscow Kremlin. And already in 1936, the Kremlin decided to design new stars. Sketches prepared by renowned theater artist and decorator, People's Artist of the USSR, academician FF. Fedorovskiy. He was the one who had the idea to use a special ruby ​​glass instead of metal for decorating star rays. He redefined the shape, size and pattern of stars.

In May, the Kremlin's 1937 was decided to replace metallic stars with ruby ​​stars with powerful internal illumination. Moreover, Stalin made a decision to install such a star on the fifth Kremlin tower - Vodovzvodnaya: from the new Big Stone Bridge a stunning view of this slim and very architecturally harmonious tower was opened. And it became another very winning element of the "monumental propaganda" of the era.

Another fundamental solution was proposed by the same academician F.F. Fedorovskiy. In order for the stars to look the same from the ground, they were made of different sizes, depending on the height at which they were mounted. The smallest one was designed for a relatively low Vodovzvodnaya tower - the distance between the ends of the rays of the entire 3 meter. Troitskaya and Borovitskaya stars are already larger - 3,5 and 3,2 meters, respectively. But on the Spasskaya and Nikolskaya towers, the stars reach the 3,75 meter, which, however, is distinctly smaller than the first metallic stars.

For Kremlin stars, 500 square meters of special three-layer ruby ​​glass were welded. At the base of each star, powerful bearings were installed so that they could rotate under the pressure of the wind. But unlike the weather vane, indicating where the wind is blowing, the stars, thanks to the diamond-shaped cross section, are always located facing it. And at the same time, as practice has shown, they are capable of withstanding the pressure of the most powerful hurricane.

These are the stars we see over the Kremlin today. In 2015, work began on the restoration and modification of the technical support of the stars. On the Spasskaya Tower in February 2015, a new system of illumination and swivel mount appeared, which, however, was not noticeable visually from Red Square. And in the fall, the restoration of the Trinity Tower and its stars began.