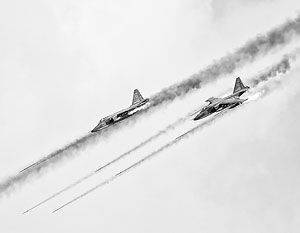 Airplanes of the Russian Aerospace Forces launched targeted attacks on ISIS positions. In recent decades, this is not the first use of military aviation Russia abroad. The experience of such campaigns suggests that the actions of the Russian army can be much more effective than the bombing of the Americans. However, several factors can affect the fulfillment of tasks.


The Russian Air Force launched combat missions in Syria. As stated in the Ministry of Defense, in the course of the air operation in Syria, the aircraft of the Russian VKS attack military equipment, communications centers, vehicles, warehouses weapons, ammunition and fuels and lubricants belonging to the terrorists of the IG.

The composition of the forces and assets involved is not officially disclosed. Admiral Vladimir Komoyedov, Chairman of the State Duma Defense Committee, said earlier that reconnaissance and assault aircraft would be mainly involved, attack helicopters, and possibly fighter-bombers.
When asked why the decision was made specifically about the air operation, the head of the State Duma committee replied that, “first, such operations are minimal in terms of losses”.

“Secondly, the ISIS does not have an air defense system, only, perhaps, portable Stingers,” he continued. “Thirdly, if aviation is competently used, then it is an effective means of destruction, especially in a desert territory.”

At the same time, he noted that divisions and units of the ground forces, which are needed to protect air bases, will be deployed in Syria. “Of course, we need some kind of ground forces. Not in order to conduct an offensive or military operations, but in order to preserve and protect our bases, including aviation, our advisers and others, ”said Komoedov, reports TASS.

“I am absolutely convinced that our president is not going to introduce any military units into Syria, because this would mean drawing Russia into a dubious conflict with incomprehensible and completely unpredictable consequences. It would not even be Afghanistan, but something more abruptly, "said Sotnikov RIA"News».

At the same time, he noted that “some of our partners would very much like Russia to send combat units there, in fact, with Russian hands to deal with the Islamic State.

The last experience of the use of the Air Force without the involvement of ground forces from the Russian military was at the beginning of the 90's during the civil war in Tajikistan. The border detachments covering the border with Afghanistan became the site of the squadrons of the Mi-24 helicopters, which regularly flew to bomb the militants. In particular, in August of the 1992, they destroyed the armored vehicles hijacked from one of the regiments of the 201 Motorized Rifle Division. In 1993, the Su-25 186 th fighter-assault aviation regiment based at the Kokaida airfield in Uzbekistan began to perform combat missions in the territory of Tajikistan. They made several sorties a day and became a serious factor in turning the tide of the war.
During the actions of the Russian Air Force in Tajikistan, several helicopters were lost, but there were no casualties among the personnel.

Features of the region

According to the vice-president of the Academy of Geopolitical Problems, Colonel Vladimir Anokhin, the experience that Russian pilots and their commanders have will allow them to more effectively deal with the militants than the US Air Force did.

“Any of our actions will most certainly be more effective, because the Americans and their allies against ISIS did not fight,” he told the VIEW newspaper. “The number of combat missions against ISIS for all this time is absolutely insignificant compared to what the Soviet Union carried out against the Afghan Mujahideen.”

“We have a very good experience, which Americans do not have. Russian aviators showed themselves very effectively in the skies of Egypt and in the skies of Syria. I can say this with confidence as a participant in the hostilities in Syria and Egypt in 1973, he said. “The effect of the actions of our aviation will be very serious.”

According to him, the Syrian landscape is much easier to perform combat missions than the one in which Russian pilots are accustomed to work. “There is a flat surface, there are no mountains and forests. Another thing is that the igilovtsy understand that their only salvation is to stand behind the backs of the civilian population in the cities, therefore when using aviation there is a risk of causing losses to the civilian population, ”the expert noted.
“We have very good rocket armament, but this is not enough - we need radars, mechanics and, most importantly, pilots who are trained not to fly at their own airfield, but wherever military need will send,” said the honored pilot of the USSR, a former military man, to the VZGLYAD newspaper Pilot Oleg Smirnov. - They indicate on the map a point with the task of bombing - and this requires great professionalism in order to find it and complete the task. If the statements of the chiefs about the training of our pilots are true, and not just some kind of window dressing, then everything is fine. "

"The main thing is that they do not interfere with us"

Experts note that a lot depends on the behavior of American politicians and military. “ISIS is the brainchild of Americans. And the fact that they supply them with weapons, using all sorts of tricks, no one denies. And here the most important thing is that they do not interfere with us, says Anokhin. - They will not interfere - everything will be in order. Will give ISIL reconnaissance information - it will be harder. Shit they know how. If they provide ISIS with air defense, it’s hard to imagine how we will work. Su-25, MiGs will work. But if they have serious anti-aircraft weapons, it will be very difficult for helicopters to handle them. ”

He noted that if the US continues air operations in the region and does not change its position regarding the government of Bashar al-Assad, they will find themselves in a difficult situation: “It is foolish to go to the target without coordination with ground forces. They need to remove Assad, who has an army, and on the other hand, will they coordinate with Assad? This is some kind of nonsense. ”
“Of course, it is necessary for the whole world to attack these people, look what they are doing,” Hero of Russia, Honored Test Pilot Colonel Igor Malikov told the newspaper VIEW. - Probably, they will somehow divide the airspace. We will have Americans in our headquarters, they have Russians. And they will coordinate all these things. ”

“Everything must be coordinated so that the Russians and the Americans do not hurt each other,” says Oleg Smirnov. - It is necessary that by the time of the attack the members of the coalition leave this territory, because the weapon will be the toughest. We have rockets from which the earth burns under our feet. Let us see how it will be in practice: if the Americans say that they will leave, but in fact they will remain, then this will be a disaster. Aviation without concerted action is a nightmare. ”

“If the Americans remain - on which side they will be? - the expert asks. - One option is in response to a warning that we will bomb some territory and it’s better for everyone to get out of there, they may ask not to do it. The other is when they offer to strike a joint blow from this direction from different directions. ”