Complexes of active protection of the Arena family

October 2 2015
55
Of great interest are the so-called active protection systems (KAZ) for armored vehicles. This equipment is intended for the timely detection and destruction of enemy antitank weapons flying up to a combat vehicle. A set of active protection means independently monitor the surrounding space and, if necessary, performs the so-called shooting. protective ammunition. In recent years, the domestic industry has been actively promoting on the market the KAZ of the Arena family, designed for installation on the main Tanks and other Russian-made armored vehicles.

The first version of the Arena complex was created in the eighties by the Kolomna Engineering Design Bureau. The development of the system was headed by N.I. Guschin. Initially promising KAZ was intended for installation on the main tanks T-80. For a number of objective reasons, the first public demonstration of the new system took place only in 1997 year. The complex "Arena" attracted the attention of specialists and became the subject of numerous disputes, which do not cease to this day. 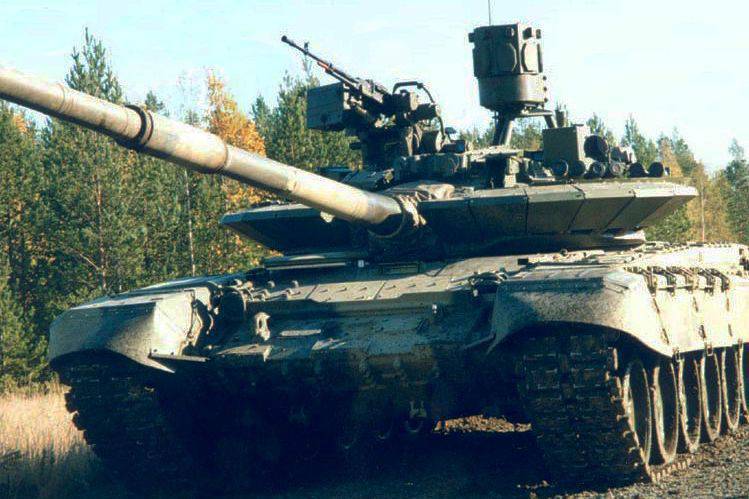 Shown in the late nineties, KAZ "Arena" consisted of several basic systems. The complex included detection and control equipment, weapons, and control and test equipment. It was proposed to install all the facilities of the complex on the existing tanks, which made it possible to significantly increase their survivability in real combat conditions.

The principle of operation of the Arena system looked relatively simple. Before entering the battle, the crew of the combat vehicle turns on the KAZ, after which it operates in a fully automatic mode and solves all the problems of protection against flying anti-tank ammunition. The radar of the complex monitors the environment and detects approaching objects that have certain dimensions and speed. If the speed and dimensions of such an object correspond to an anti-tank rocket-propelled grenade or a guided missile, shooting of a protective fragmentation ammunition is made. A directed stream of shrapnel ammunition destroys a dangerous object.

The situation is monitored using a multi-function radar station. This device is located in a characteristic polygonal casing placed on the roof of the tower of the protected machine. The design of the antenna unit allows you to monitor the entire protected sector. Depending on the type of base armored vehicle, KAZ Arena can intercept anti-tank ammunition in a sector of width 220-270 °. In addition, due to the rotation of the tower provides a full all-protection protection. 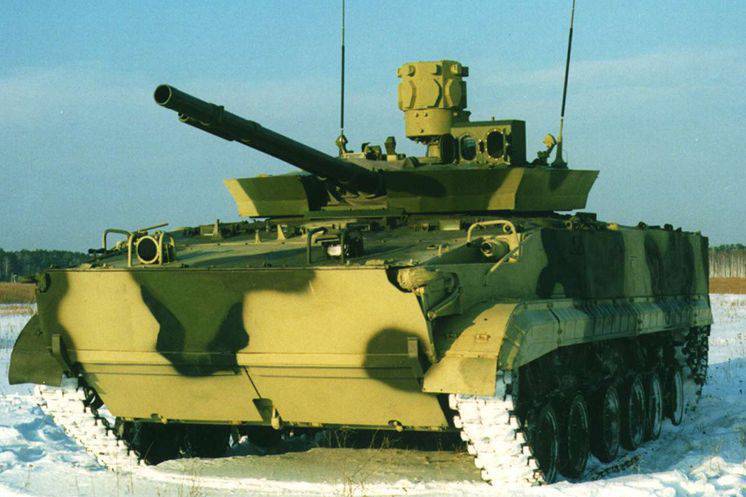 The radar complex "Arena" has a target detection range at the level of 50 m. This range is sufficient for the timely detection of the threat and response to it by launching protective ammunition. The response time of the systems is stated at the 0,07 level.

Information processing from the radar station is carried out by a computer located inside the base armored vehicle. All units installed inside the hull of the tank, occupy no more than 30 cube. dm Due to the high speeds of weapons, all stages of combat work are carried out automatically and without the participation of the crew. The task of tank crews is only the timely inclusion of all necessary systems.

After the shot, the protective ammunition is removed a few meters from the armored vehicle and is undermined. When undermining fragments form, the trajectory of which intersects the trajectory of flying ammunition. The destruction of a grenade or missile occurs due to mechanical damage to the structure and the initiation of the detonation of the warhead. Undermining occurs at a considerable distance from the armored vehicle, because of which the cumulative warhead can not cause him serious damage. 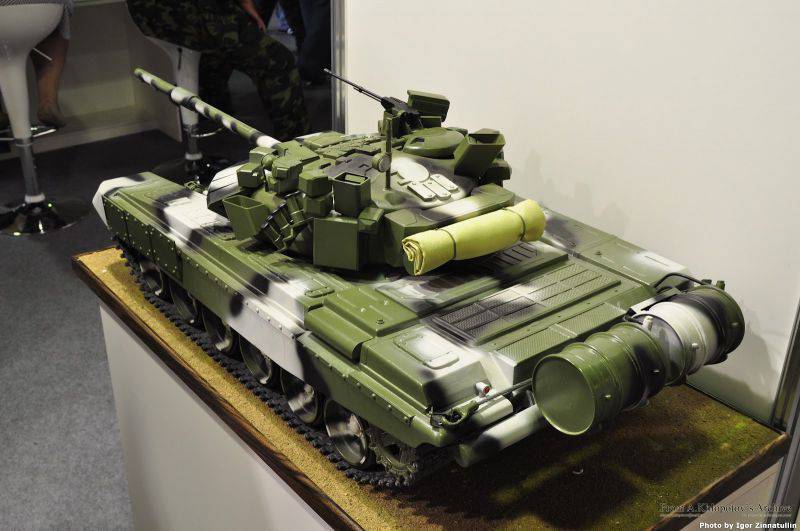 Model of the T-90 tank with a modernized complex "Arena". Photo Gurkhan.blogspot.ru

The automation of the complex not only makes the detection of flying objects, but also performs the selection of potentially dangerous targets. This takes into account the dimensions of the detected object, its speed and flight path. Shooting protective ammunition is made only when it detects a relatively large object moving at a speed from 70 to 700 m / s and able to get into the protected machine. Thus, the consumption of protective ammunition during firing of a machine from a rifle weapons or small-caliber artillery. In addition, the KAZ takes into account the enemy’s blunders and does not attempt to destroy the ammunition passing by or the object entering the radar field of view, but moving from the armored vehicle.

The launchers of the complex are arranged in such a way that the sectors of action of neighboring protective ammunition overlap a little. This, among other things, provides the ability to repel multiple attacks from one direction.

Due to the use of fragmentation protective ammunition, active protection complexes pose a serious danger to infantry escorting tanks. The design of launchers and protective ammunition of KAZ Arena is designed in such a way that all fragments that are not in the threatening object enter the ground at acute angles at a distance of no more than 25-30 m from the base machine. Thus, for safe interaction with tanks or other equipment, the infantrymen must be at a sufficient distance from it.

Complex "Arena" of the first version was quite compact and easy. For the installation of its indoor units, a volume of at most 30 cube is required. dm The total weight of the entire system, depending on the amount of protective ammunition, ranges from 1 to 1,3 t. Thus, the installation of active protection systems has almost no effect on the characteristics of the machine. 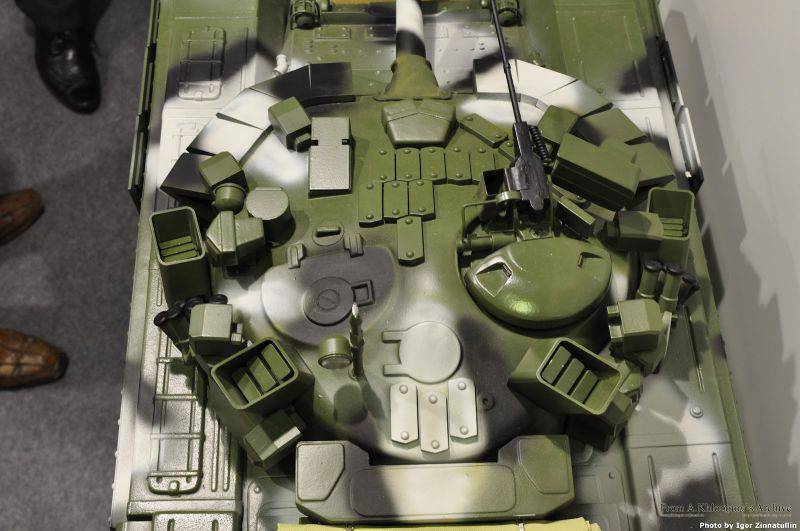 The first carriers of KAZ "Arena" were to be tanks of the T-80 family. In 1997, this complex was first introduced as part of the equipment of the T-80UM-1 tank. In the future, it was decided to modify the complex for use on other types of armored vehicles. The result of this was the installation projects of the Arena on the T-72 tank and the infantry fighting vehicle BMP-3. All these projects are based on the same ideas, and their differences lie only in the composition and layout of some systems. On the roof of the armored turret, a rack is mounted with an antenna unit of a radar station. On the frontal and on-board parts of the tower are mounted launchers of protective ammunition. In addition, control systems of the complex are installed inside the fighting compartment. The exact location of the various elements depends on the type of base machine.

Since the end of the nineties, the Engineering Design Bureau, in conjunction with other defense industry enterprises, has presented several prototype armored vehicles equipped with the Arena KAZ. Such modernization of combat vehicles was of some interest to potential customers, but no one wanted to buy the proposed systems. The Russian Ministry of Defense and the military departments of some foreign countries did not order the Arena complexes.

This decision of the military was associated with some serious drawbacks of the complex in the existing version. For example, concern was expressed about the safety of the infantry accompanying the tanks. By destroying enemy ammunition with directed splinters, an active defense complex can injure or kill friendly soldiers. In this case, the infantry for one reason or another does not always have the opportunity to move away from armored vehicles to a safe distance.

In addition, the reason for the claims was the design of the antenna unit radar. This essential element of the complex was proposed to be mounted on the roof of the tower, which entailed a lot of problems. Thus, a large unit on the roof of the turret increases the overall dimensions of the armored vehicle and increases its visibility, which can adversely affect survivability in combat conditions. The second problem of the complex is the lack of serious protection of the antenna unit. According to some reports, the elements of this product can be damaged even by small arms fire. Thus, the key element of KAZ has insufficient survivability, and its damage makes all other devices useless and deprives the armored vehicle of the required protection.

The existing shortcomings of the Arena system led to the fact that at the moment no one wanted to acquire it. However, the failure did not stop the work. At the end of the two thousandth Kolomna specialists began to develop a project for the deep modernization of the complex, the purpose of which was to eliminate the existing shortcomings. The result was the emergence of a new KAZ, differing in the layout of the aggregates on the outer surface of the base machine tower. 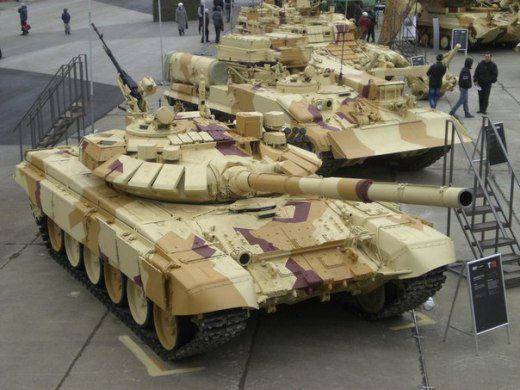 In 2012, the model of the main tank T-90С with the upgraded KAZ Arena-E was presented for the first time at the exhibition “Technologies in mechanical engineering”. The proposed armored vehicle differs from the existing models by a different composition of protective equipment and its layout. Later a full-fledged sample of the tank, equipped with new equipment, was presented. In recent years, this machine has been a permanent exhibit at various domestic exhibitions.

The largest claims from the specialists and potential customers were caused by a large antenna unit. The new project abandoned this unit, seriously worsening the real characteristics of the machine. A single radar antenna unit was divided into several small devices, which were distributed over the outer surface of the tank turret. The use of a multi-module radar station made it possible to maintain an almost circular view of the space, but did not lead to a noticeable increase in the machine's projection.

Another layout innovation concerns the deployment of launchers for protective ammunition. In the basic project "Arena" these devices are located around the perimeter of the armored turret and are responsible for the protection of certain sectors. The new project involves the use of blocks in which several launchers are combined. Like the individual radar antennas, blocks of launchers are distributed over the roof of the tower and provide protection against attacks from different angles. On the model presented in 2012, four blocks were present, each of which contained at least three protective ammunition. 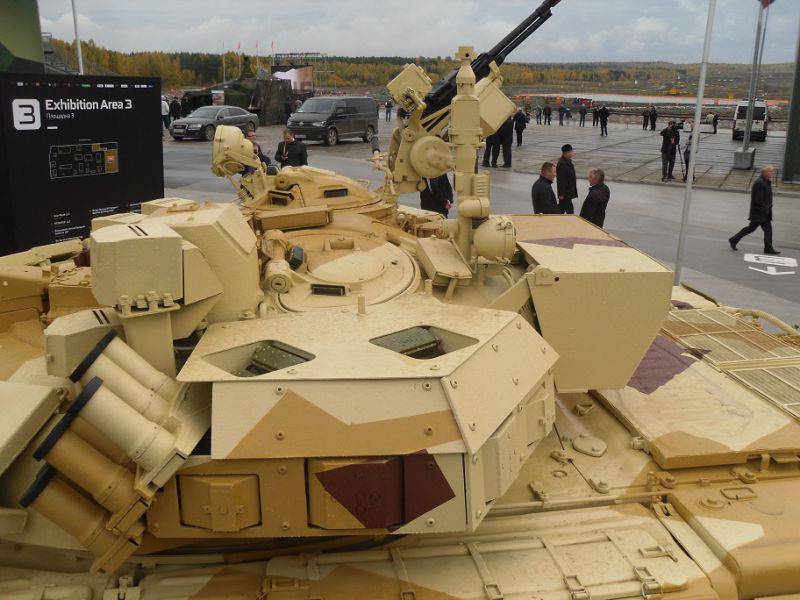 The exposition of the exhibition Russia Arms Expo 2013 was attended by a full-fledged sample of the tank, equipped with a modernized AAZ-A. This sample had some noticeable differences from the layout presented in 2012. In the new version, the tank receives four blocks of launchers mounted in two casings on the sides of the turret. At the same time, a multi-module radar station is maintained, the elements of which are located in different parts of the tower.

According to reports, the modernized Arena-E complex retains all the basic characteristics of its predecessor. As before, he is able to independently detect targets at distances up to 50 m, determine the degree of danger of a flying object and give the command to fire protective ammunition. The defeat of a rocket or other anti-tank ammunition is made at distances up to 30 m from the tank. In addition, the possibility of two consecutive triggers of starters in the same protection sector is claimed.

The upgraded version of KAZ "Arena" was introduced a few years ago, but, as far as we know, has not yet reached mass production. Potential customers have not yet expressed the desire to purchase these systems and install them on their tanks. At the same time, the proposed complex may indeed be of interest to the military of Russia and other countries. For example, in 2014, the option of installing the complex on T-72B3 tanks was presented. This type of equipment is actively used in the military, and can now be equipped with active protection complexes. However, so far the defense ministry did not talk about its plans to acquire such equipment.

Ctrl Enter
Noticed a mistake Highlight text and press. Ctrl + Enter
We are
Complex of active protection Aselsan AKKOR (Turkey)Is the old well forgotten to become the new? Part-2. By call of honor and duty
55 comments
Information
Dear reader, to leave comments on the publication, you must to register.