October 2 2015
12
The central event of the current jubilee UN General Assembly was the speeches from the rostrum of the world organization of the presidents of the United States and Russia, as well as the meeting of Vladimir Putin and Barack Obama, which opened up opportunities for interaction between the two countries in resolving the crisis in the Middle East. Other important events at the UN site, in particular, the three-day summit on sustainable development, which was attended by more than 150 heads of state and government, and the summit of the leaders of India, Japan, Brazil and Germany, remained in the shadow. German magazine The Local pathetically called him the “Big Four” (G4), emphasizing the ambitions of the participants in this meeting for permanent membership in the UN Security Council. 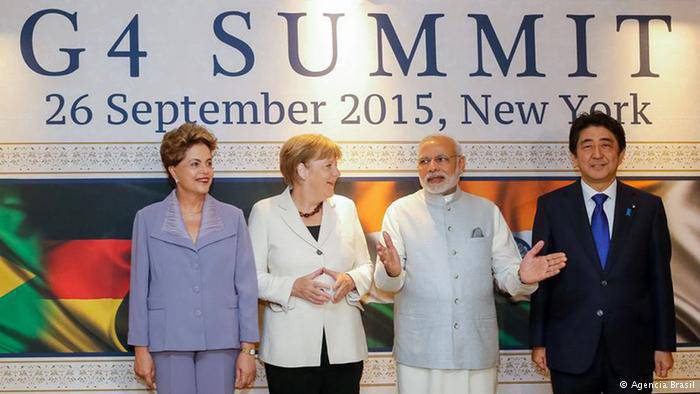 The world is committed to sustainable development

The three-day summit on sustainable development anticipated a general political discussion at the General Assembly. At this forum, the member states of the world organization developed a plan for global socio-economic development for the period up to 2030, and identified ways to implement it. The final declaration prescribed 17 sustainable development goals for 15 years.

The start of this great work was laid back in September 2000 at the Millennium Summit. Then the leaders of states and governments, inspired by the meeting of the millennium, considered it important to give the world community a vector of sustainable sustainable development and formulated eight primary goals for this. First in order, and, perhaps, in importance, the summit’s declaration was tasked with eliminating absolute poverty and hunger. It was planned in time to 2015 year to halve the proportion of the starving population, that is, those whose income is less than one dollar a day. In addition to her, the program prescribed: to ensure universal primary education, to promote gender equality and women's empowerment, to reduce by two thirds the mortality among children under five years old, to stop the spread of AIDS, malaria and other serious diseases, to ensure environmental sustainability, to form a global partnership in development goals.

This entire humanitarian program was designed for a period of fifteen years. Now it has expired. The time has come to summarize and define further planetary goals. That was the current summit. A report with fairly positive numbers was distributed on it. For example, thanks to the implementation of the Millennium Summit programs, millions of people were brought out of extreme poverty. The report indicates: currently, millions of people live on the planet 836 for less than $ 1,25 per day. 1990 had 1,9 billion people in this sad list - twice as many.

Compared to 1990, the infant mortality rate has decreased by half from 90 to 43 cases per thousand children. There are successes in the fight against malaria, HIV and other diseases. So, according to the UN, in 2000-2013. The number of new HIV infections has dropped from 3,5 million to 2,1 million people - by 40 percent.

This positive picture was formed mainly due to economic growth in developing countries. In China, for example, the number of poor people fell from 452 to 150 million people. Poverty in India is receding. Here, too, the bill goes to tens of millions.

At the same time in the countries of Africa, especially sub-Saharan Africa, if there are positive changes, it is within the limits of statistical error. Despite the fact that the United Nations spent very decent money on the implementation of development programs. Speaking at the summit’s rostrum, Russian Foreign Minister Sergei Lavrov noted the contribution of our country. “As part of the Heavily Indebted Poor Countries (HIPC) Initiative, the Russian Federation has written off the main debt to African countries for more than $ 20 billion. The volume of our assistance to international development is increasing. Last year, they increased by more than 20 percent, the minister said in a speech. “Only the UN system provided over $ 127 million, and the total amount of Russian assistance to other countries according to the OECD methodology was $ 875 million.”

There are many obstacles to the implementation of development programs. For the first fifteen years of the new millennium, the world was overshadowed by a series of military conflicts (Afghanistan, Sudan, Iraq, Libya, Mali, Nigeria, Syria, Ukraine, Yemen ...), the global financial crisis, the expansion of the social base of terrorism, the growth of its threat (entire regions appeared on the planet , controlled by militants and bandits), the spread of new fatal diseases (of which there is an epidemic of Ebola fever.) All this did not contribute to the goals of sustainable development, but brought with it chaos, misfortune and suffering to the peoples.

Therefore, the new program was worked out with special care in order to achieve “a balanced combination of economic, social and environmental aspects of sustainable development”, as this work was evaluated in the Russian Foreign Ministry. It took almost three years to agree on the global development agenda after 2015. In early August, it was approved by the UN member states.

In the final 45-page declaration of the development summit, 17 tasks are defined that the world community will have to solve over the next 15 years - up to 2030. The eradication of poverty and hunger is still the main development condition. Other important tasks have been identified - to ensure food security and promote sustainable agriculture; ensure a healthy lifestyle and promote well-being for all at any age; provide universal and quality education, and encourage lifelong learning opportunities.

The international community pledges to achieve gender equality, ensure the availability and rational use of water resources, as well as universal access to clean energy, promote sustainable economic growth and create jobs, create infrastructure for industrialization, reduce socio-economic inequalities within countries and between states, ensure safe living conditions in cities and towns.

The implementation of sustainable development goals will require a total of 169 derivative tasks in the field of socio-economic development. A high-level forum will be convened under the auspices of the General Assembly to monitor their implementation once every four years. High goals cost big money. According to the UN Conference on Trade and Development (UNCTAD), it will take from 3,3 to 4,5 trillion to fulfill new tasks. dollars a year.

A completely different agenda was at the summit of the heads of countries named by the German magazine “Big Four”. German Chancellor Angela Merkel set the tone here. As Reuters reported, at a meeting with colleagues from Brazil, India and Japan, Merkel raised the question of the need to reorganize the UN Security Council. “We need a new working way to solve problems. This requires the reorganization of the Security Council, making changes to it that reflect the balance of power in the world better than it is reflected now, ”the agency said the Chancellor said.

Brazilian President Dilma Rousseff, Indian Prime Minister Narendra Modi and Japanese Prime Minister Shinzo Abe supported the desire of the German Chancellor to revise the political architecture that emerged from the results of the Second World War. Reuters notes that "the participants in the meeting solemnly declared themselves" legitimate candidates "for permanent membership in the UN Security Council, denoting a claim to the right of veto."

This initiative has widespread support. In mid-September, the text of negotiations on Security Council reform was even agreed upon within the framework of the UN General Assembly. However, the proposed document remained without consequences, since it was not supported by China, Russia and the United States.

However, we turn to storiesas Vitaly Churkin did. People usually perceive reality as an intransigent reality - as if everything had been so from time immemorial. But in the depths of the past lies a lot of discoveries. Here is the UN Security Council. In its present form, it has existed only since 1971, when, under pressure from the countries of the socialist community, the People’s Republic of China (Beijing) changed the Republic of China (Taipei, Taiwan) in the Security Council.

It was in the seventies that the current Security Council was formed, whose members responded to four main features. These were sovereign states, winners in the second world war, possessing nuclear weapons and experience solving world problems. The statute gave them veto power. The founding fathers of the United Nations introduced this rule to prevent military conflicts. According to their conception, the problems of peace should be resolved by simple voting, which will save from the temptation to use military force to resolve a dispute. In this sense, the veto replaces the armed confrontation, which was confirmed by many years of experience.

Under the current criteria from the countries of the so-called "big four" (and there are still the "big five" of applicants with the participation of Italy, Indonesia, etc.), only India is a bit of a fit. As for Germany and Japan, these states not only unleashed the Second World War and lost it, but are still limited in sovereignty. What does the presence of the occupying forces on their territory and dependence on the United States in solving world and national problems indicate?

The world recognized the economic successes of Japan and especially Germany, whose doychemarka has overgrown the borders of the country, embodied in the global euro. However, the Security Council is not concerned with the economic development of the international community, but with problems of war and peace. In this topic, Japan’s authority is minimal, and Germany is only gaining it through participation in resolving the conflict in Ukraine. In other formats, like Iranian or Middle Eastern, its role was not even secondary. This is like with Poland, which was eventually sent to the table, where the future of Ukraine is being decided.

In a word, the ambitions of politicians who are trying in every way to raise the regional status of their states to the right to solve world problems are limited by their real capabilities. And also an unforgotten burden of responsibility for the second world war. Last August, for example, the Russian Foreign Ministry tightly pulled the Japanese with their wandering fantasies about the "northern territories." He noted that the Kuril Islands have become part of the Russian Federation following the results of the Second World War and their status is not negotiable. The subject of negotiations can only be cooperation in these territories.

No one has forgotten anything. Even in Europe with its transparent borders. Here, for example, Greece has recently made claims to Germany for the gold and foreign exchange reserves withdrawn during the war. The account of the war is not closed even seventy years after its end.

... The world has changed and continues to change. It becomes multipolar. Over time, this will also affect the architecture of the world organization, its Security Council, on the reform of which the world community has thought. However, new centers of power are still being formed. The recognized centers - the United States, Russia, China - have already said their weighty word, blocking the initiative of large and small companies of regional states trying to improve their global status. Their time has not come yet ...