"The situation will be aggravated"

October 2 2015
28
October 2 in the city of Paris will host a meeting in the "Norman format" of heads of state - the guarantors of the Minsk settlement process in the former Ukraine. It is in the “former Ukraine”, because Ukraine can’t be returned to Ukraine with a homeless, free from nationalist intoxication, roughly speaking, Yanukovych: the volunteers destroyed and burned it on the Maidan in Kiev, Odessa, Mariupol, Kharkov, Slavyansk and Kramatorsk, throughout Donbas. The Minsk agreements are designed to find a way out of the Ukrainian crisis that has flared up, the Paris meeting will actually be summed up, because “Minsk” is valid only until December 31, 2015, that is, it will end in three months. 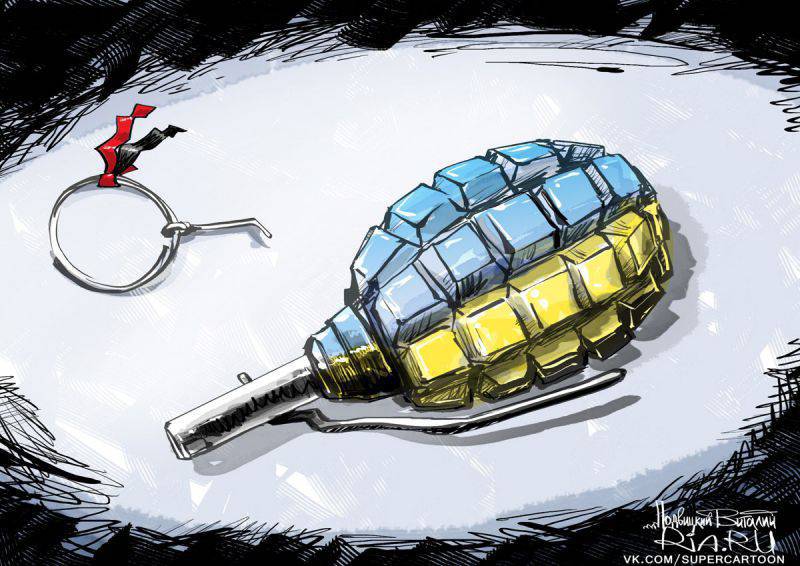 It has already been announced that after the summit there will be audiences of Putin and Merkel, Putin and Hollande, but there will definitely not be a meeting of Putin and Poroshenko, the press secretary Dmitry Peskov emphasized. And this is an important sign.

What did Europe come to Paris with? The plan of Pierre Morel, coordinator of the Minsk tripartite working group, according to which Kiev should adopt a separate, special law on elections in the Donbas, is known, they should be held while maintaining the status quo. Poroshenko not only rejected this plan, but also, as usual, lied that this was a personal opinion of Pierre Morel. This is the opinion of Paris and Berlin, and it is not fully but coincides with the position of Moscow: it takes into account its most important requirement for holding elections in the Donbas and maintaining the status quo.

Official Kiev is in favor of holding elections in the Donbas "according to Ukrainian laws, after the disarmament of the" militants "," the withdrawal of Russian troops and the transfer of control over the border to Ukraine. " That is, Kiev would like first, without a fight, to get a military victory over the Donbas, and then deal with it "according to Ukrainian laws." This position is forced by the American curator of Banderia, the ambassador in Kiev, Jeffrey Payette.

The unofficial side of “Minsk” is Washington, and specifically Vice-President of the USA Joe Biden, the architect of Kiev Maidan, and Banderia, who was born from it. This is his second project in the post-Soviet space: before that, he lighted the “beacon of democracy” from Saakashvili Georgia, in Kiev, he simply sat at the head of the Bandera leaders during his visit.

Michael Carpenter, an adviser to Biden, recently told the press that the boss was "extremely concerned about the level of corruption in Ukraine." But most importantly, Biden “fears that the Minsk agreements before the end of the year will be completely disrupted by the elections in the DPR and the LPR”. Corruption charges for Washington are a constant propaganda cover for his extreme political displeasure, this time Poroshenko, possibly for disrupting the August offensive of the Bandera troops in the Donbass, after his meeting in Berlin 24 in August with Chancellor Merkel.

Joe Biden allegedly threatened Poroshenko to refuse support. In general, the expression of fear in the breakdown of the Minsk agreements in the language of the American mafia means an order to disrupt them. Otherwise - they will refuse to support. Then these threats to Biden were disavowed by the State Department, but then Poroshenko still has time to thwart the “Minsk”.

Knowing the approximate positions of the parties, we can assume that Poroshenko in Paris will be under pressure, like 24 of August in Berlin, from the side of the guarantors of Minsk. But how will all this end? The latest "menacing" statements of Poroshenko "to give Moscow in the teeth" say that he is not childishly afraid of the "father" Biden and his "son" Payette. That is, it is likely that Poroshenko will go on disrupting the “Minsk” after the elections in the Donbass, as Joe Biden predicts.

In general, at the end of 2015, three important events are superimposed: the October elections in Banderia and Donbas, the payment of 3's billion-dollar debt to Kiev Moscow, and the official end of the Minsk peace process. And all three events are with a negative outlook: holding the October elections on “Ukraine” is fraught with clashes with Maidans and gunfights, Moscow refuses to pay Moscow’s debt, so the default shines for it, the Minsk agreements may be thwarted by Kiev. “The situation will be aggravated,” Kiev political analyst Mikhail Pogrebinsky made his forecast for the end of the year, and it’s hard to disagree.

After the breakdown of “Minsk”, Kyiv may resume artillery shelling of the Donbass, as it was in August, right up to attempts at a winter offensive. Not only in pursuance of Biden's instructions, but also for domestic political reasons. As the election of 25 October approaches, the main political front for Poroshenko will be the internal political front, its confrontation with the ultranationalists (fascists) and the oligarch Kolomoisky, according to a number of Ukrainian political analysts.

Poroshenko has already announced that he will declare martial law in the event of an aggravation of the situation in the Donbas, but, on the contrary, it is possible to exacerbate the situation in the Donbas in order to impose martial law in the country, in fact, a military dictatorship, and try to crush his political opponents by force. And redirect the protest energy to the Donbass, the so-called Third Maidan against the Poroshenkovsky power of “internal occupation”. How can all this end? Someone Lyashko prophesies that "Poroshenko will be taken out of the administration on the forks." There are other unpredictable
scenarios.

In the event of the breakdown of the Minsk Agreements, Moscow will untie its hands for a new policy regarding Kiev, the Donbass, and Berlin with Paris. Russia, in fact, is not yet responding with counter-sanctions - the refusal of the supply of goods on its part. After Minsk, Russia may respond to restrictions on the supply of energy resources, such as coal and electricity, to Kiev in connection with its violation of human rights and crimes against humanity. Moreover, in December, the Crimea will connect the energy bridge with the Kuban, and it will no longer depend sharply on the supply of electricity from Ukraine.

Thus, at the end of the year, events of a historical order may occur in the former Ukraine, including the recognition by Russia of the Novorossiysk republics of Donbass. If ... Washington will not surrender its "Ukrainian project", that is, Joe Biden and his associate McCain will fall into disgrace. There are no signals of this kind from the USA yet.

From Donetsk to Kiev
Two years of war
Bandera and SS "Galichina",
And the Black Sea lies.

Ctrl Enter
Noticed oshЫbku Highlight text and press. Ctrl + Enter
We are
Results of the week. "Aria of the Moscow Guest"Residents of the DNI: We remember those killed in Slavyansk
Military Reviewin Yandex News
Military Reviewin Google News
28 comments
Information
Dear reader, to leave comments on the publication, you must to register.