Toys for the little angel. In memory of Ksenia Ivakhno 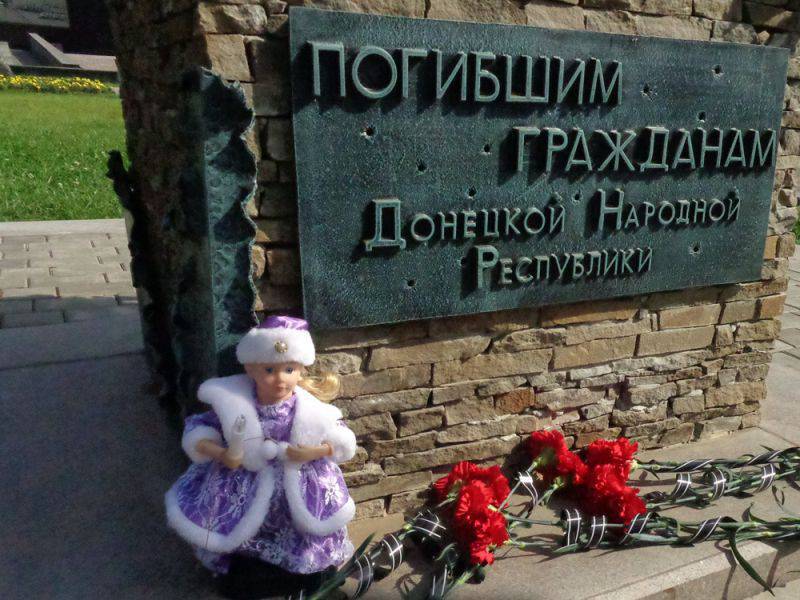 Hundreds of DNR residents - mainly young people and schoolchildren - came on the last day of September to the Lenin Komsomol Park in Donetsk to honor the memory of the little angel - nine-year-old Ksenia Ivakhno. This girl died tragically in a terrorist attack on September 24, the opening day tank competitions at the Torez training ground.

Like many other children, she just wanted to take pictures on the formidable fighting machine, exhibited as an exhibit. No one could have imagined that someone’s unclean little hands would put a “hellish car” there.

In the hands of those gathered at the mourning rally - black balloons. Some brought with them black carvings tied with black ribbons, as well as toys. 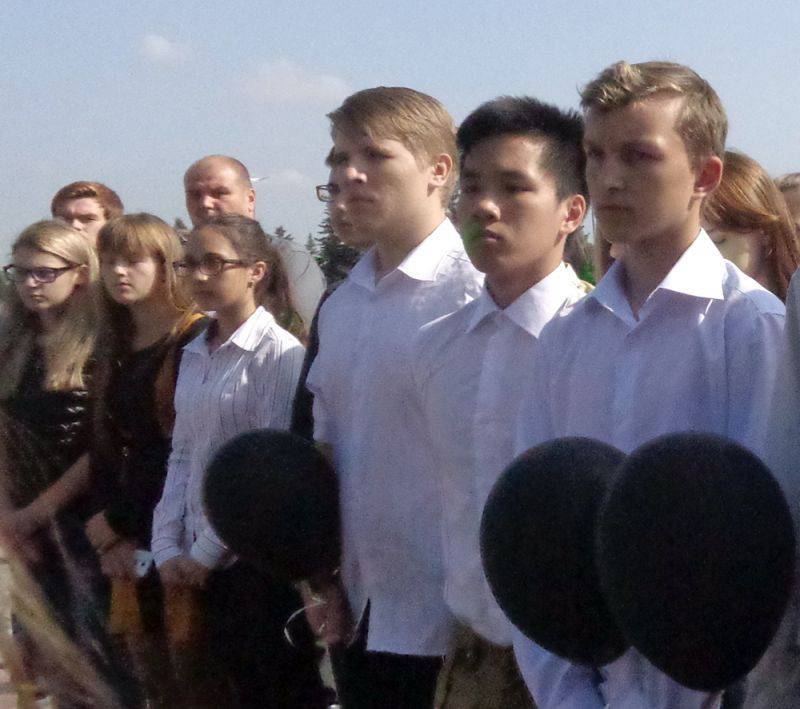 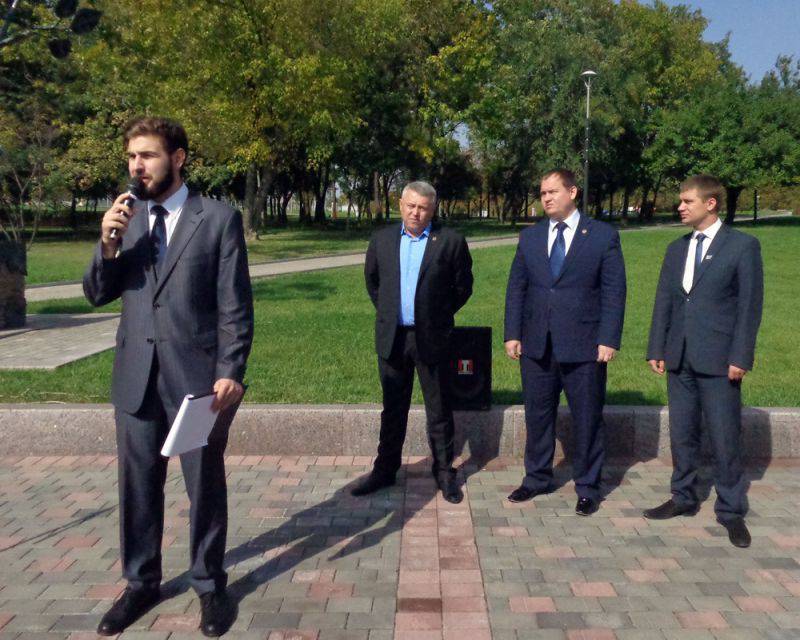 The rally was held near the monument to the dead citizens of the Donetsk People's Republic. This memorial has been recently opened. Forged black roses will now grow forever from a shell, symbolizing, nevertheless, the victory of Life over death - a victory gained by a high price. 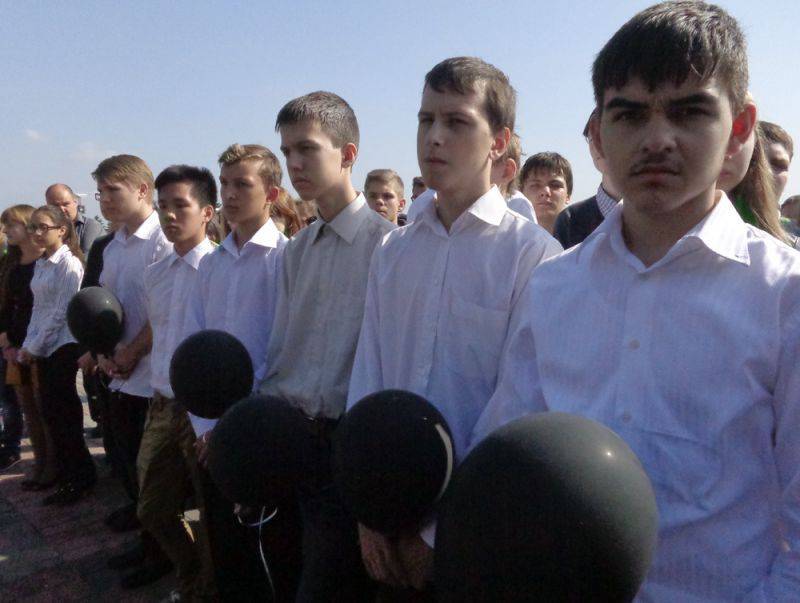 A girl came out to the microphone, read the touching poems in memory of Xenia and other children killed by neo-fascist punishers:

I do not want - you know, people
Tears of unfortunate mothers.
I do not want! When will
Childhood is peaceful in children?

“In the Donbas, human blood was shed again. This cruel and terrible war again took away an innocent life - the life of a child. All of us here are united by the memory of a young Xenia Ivakhno, who died as a result of a planned terrorist attack at the hands of Ukrainian punishers. We all gathered here to openly express contempt for these criminals. We have to say a decisive “no” to the murder of our children, our future, our hopes, ”said Nikita Kyosev, the rally host.

Oleksiy Muratov, deputy head of the Donetsk Republic movement, addressed those who came to the rally: “Today we have gathered at this monument to civilians who died in the Donbas, on one more sorrowful occasion. It is terrible that our enemies choose children as victims. 75 little citizens died in Donbas. ”

In memory of the innocent victims, a minute of silence was announced.

Then Muratov touched upon the topic of negotiations in the capital of Belarus: “In Minsk, an agreement was signed on withdrawing weapons in caliber to 100 mm. We hope that this truce will be carried out not only in words but also in deeds. And not only from the Donetsk People's Republic, but also from the Kiev authorities, who today only talk about it, but in fact we lose our brothers, sisters, people close to us every day. ”

The leader of the “Young Republic Sergey Kondrykinsky” expressed condolences to all the families who lost their relatives in this war: “The greatest pain for parents, for the people, for the country is when innocent children are dying. The pain of loss never passes away. Unfortunately, the residents of the DPR know about this pain firsthand. Thousands of lives are broken, thousands of children were injured, lost at home, orphaned. A childhood trampled by war ... Did our grandfathers and great-grandfathers bequeathed this to us when they returned the world to 1945? .. Today, the Donbass lowered the flags again. Another mourning, another taken away children's life. War and so crippled thousands of lives. The children drank sorrow with a full cup. ”

The first deputy head of the Donetsk city administration, Igor Ponomarenko, said: “My dear fellow countrymen! I appeal to you, to those who raise the Republic, to whom to glorify it, to whom to build it. I would like you to never forget how children died in our country ... It’s hard to talk about lost people, especially children ... The guys who were killed while playing football could become champions. Ksenia could become a good teacher, a good mother. She was deprived of this right ... The life of any person who wants peace and justice is our part. Never forget this, do not forgive this. I hope that we will not meet again on such occasions. But we must remember our people, our children. ”

In memory of Ksenia Ivakhno, as well as other children who are no longer here on Earth, black balls were released into the sky. 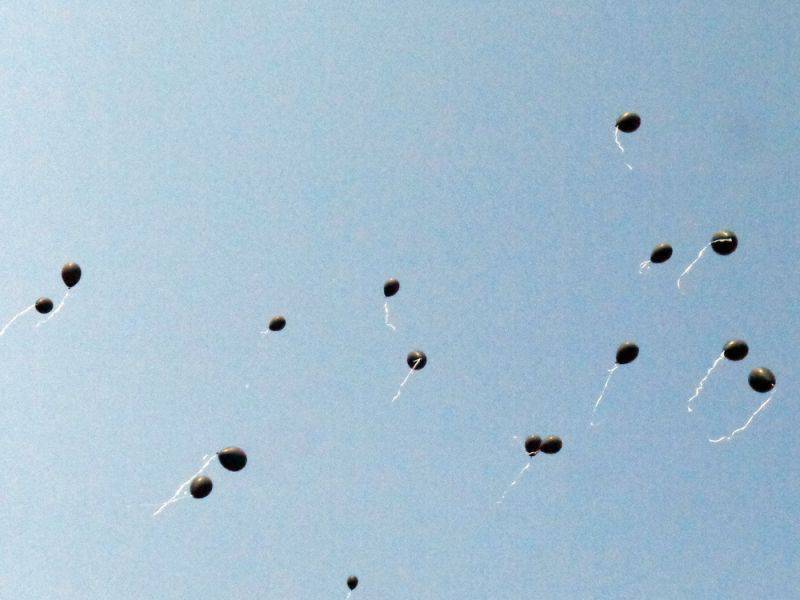 Some of them, however, did not fly into the endless blue, but caught on the huge metal roses of the monument. As if the souls of some of the little martyrs stubbornly did not want to leave their native Donbass ... Maybe the soul of Xenia herself still remains here to keep her small Motherland, which suddenly became so big and amazed by its valor of all honest people in the world. 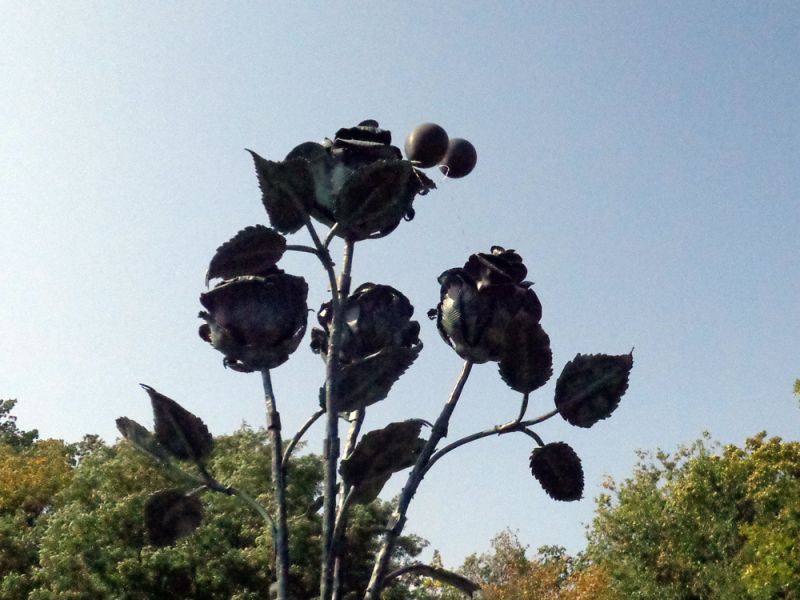 And at the foot of the monument people laid carnations and toys ... 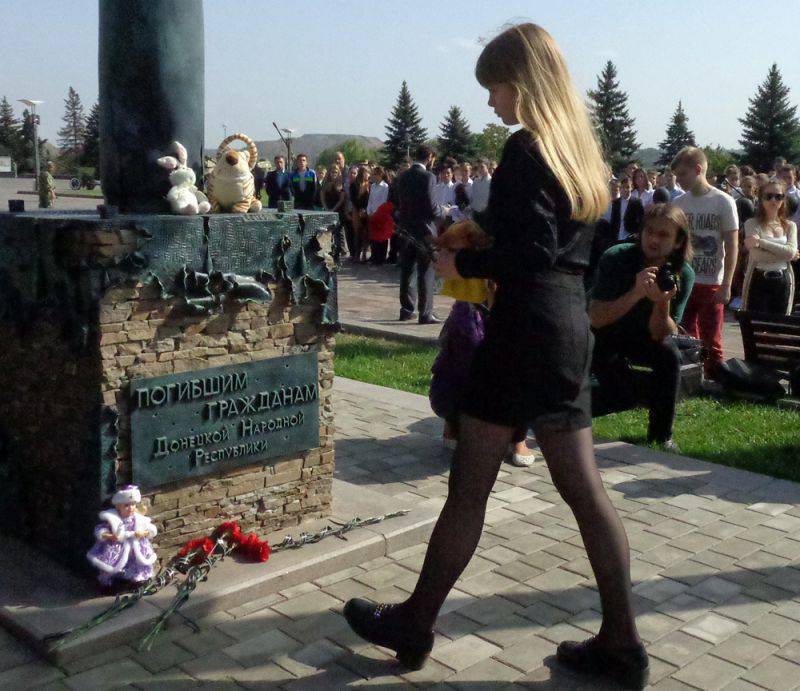 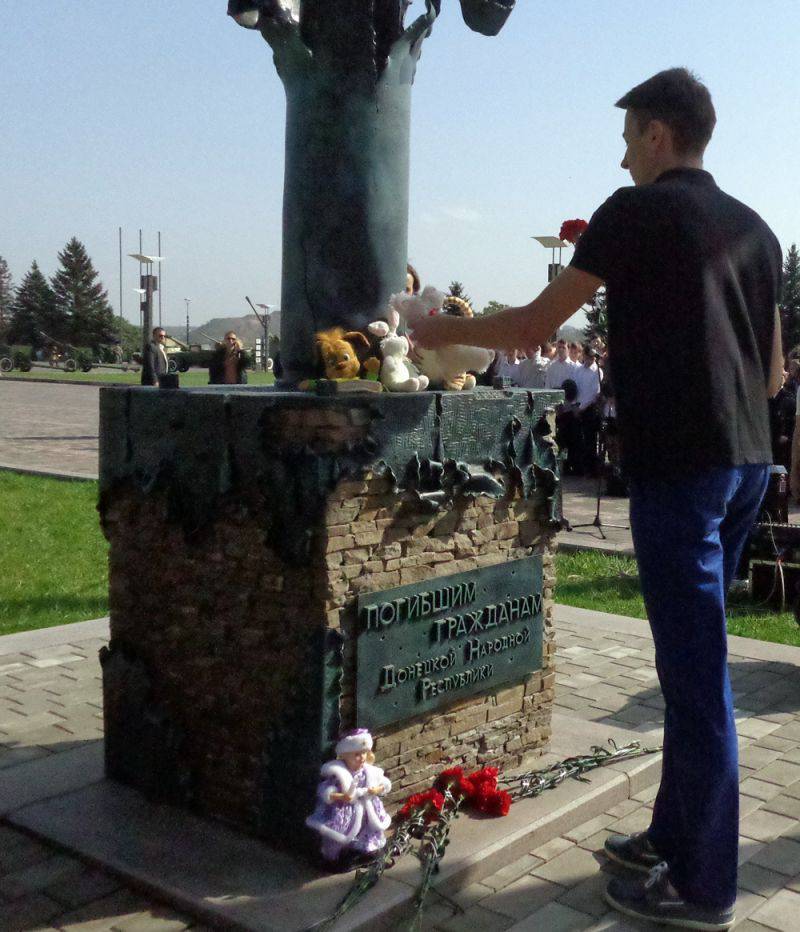 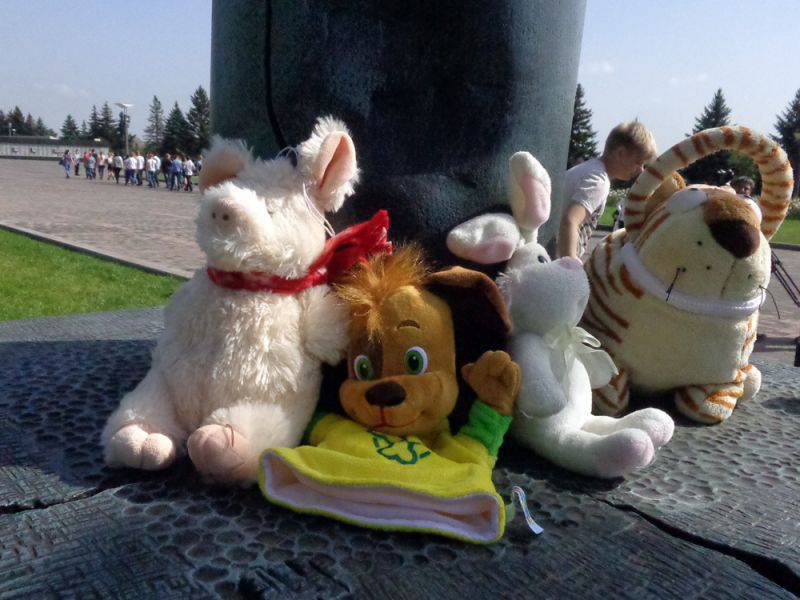 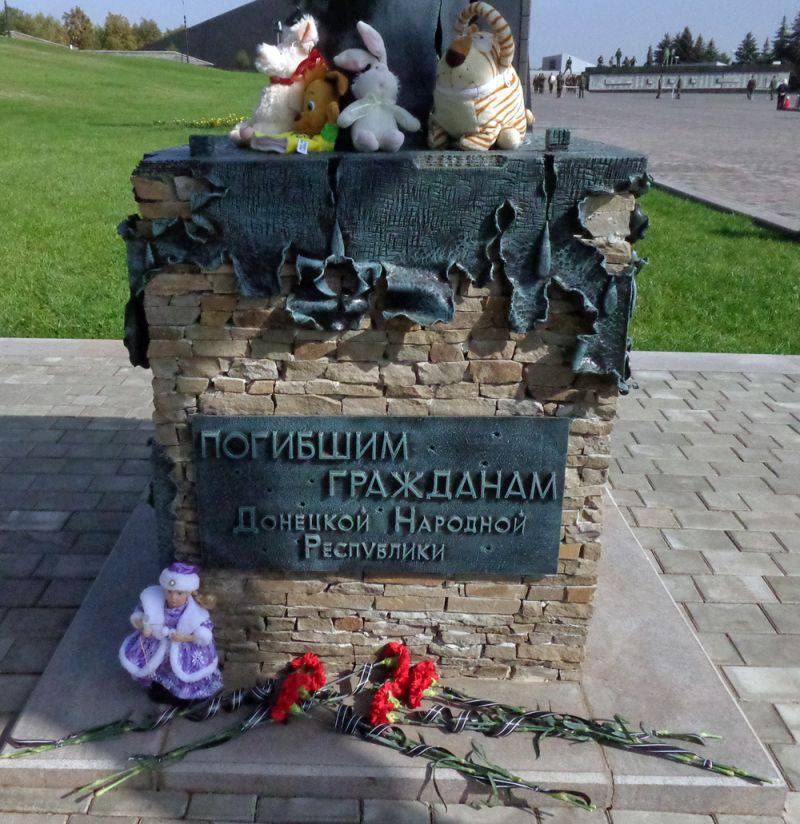 Ctrl Enter
Noticed oshЫbku Highlight text and press. Ctrl + Enter
We are
Memory is immortal. Memorial to the fallen soldiers of the Red Army opened in Amvrosiyivka and the remains of soldiers reburiedThe head of the DPR visited Gorlovka, the cadets took the oath, and in the "Olympic" hosted the forum "Donetsk Republic"
Military Reviewin Yandex News
Military Reviewin Google News
9 comments
Information
Dear reader, to leave comments on the publication, you must sign in.