October 1 2015
26
President of the Russian Federation Vladimir Putin on Wednesday, 30 September, signed a decree on the beginning of the autumn draft in the Russian Armed Forces. The text of the relevant decree was published on the official website of the Kremlin. The call will be carried out in standard calendar terms, from October 1 to December 31 2015, and will apply to Russian citizens from the age of 18 to 27 years. A total of 147100 people are planned to be called up for military service this fall, the document says. By the same presidential decree from the ranks of the armed forces at the end of military service, soldiers, sailors, sergeants and foremen will be transferred to the reserve.


It should be noted that following the spring call-up of 2015, about 150 thousands of recruits were sent to the troops of the RF Armed Forces, of which 485 people were called up from the Crimea and Sevastopol, and more than 700 thousand people of military age were summoned to the Russian military registration and enlistment offices. At the same time, 450 people were sent to the service of scientific companies, among which were Muscovites 50, who had passed the preliminary selection of 6 people for one place. The most talented candidates who are prone to research and have a higher education are being sent to such a service today. Pretenders are preselected by representatives of military research institutes. Currently, as part of the Armed Forces of the Russian Federation, 8 scientific companies are operating, in the future it is planned to create 4 such units.

Conscripts of the 2015 of the year are given the opportunity to immediately choose between the passage of ordinary military service in the armed forces, or they can conclude a contract for the 2 of the year with all the privileges of a military officer accompanying such a decision. Graduates of higher educational institutions can exercise this right immediately after graduation, other young people after three months of urgent service. The essence of such a service under the contract is quite attractive, since it guarantees future draftees to live in a dormitory, and not in the barracks, civil weekends once a week, as well as a stable salary. At the same time, having signed the contract for 2 of the year, the draftee undertakes to serve this term entirely. Dismissal from the army in this case is considered impossible. It is obvious that such a model of service will be chosen by those young people who are going to link their future with the army. At the same time, military service will remain relevant for anyone who is going to repay a debt to the Motherland, but is not interested in building a military career. 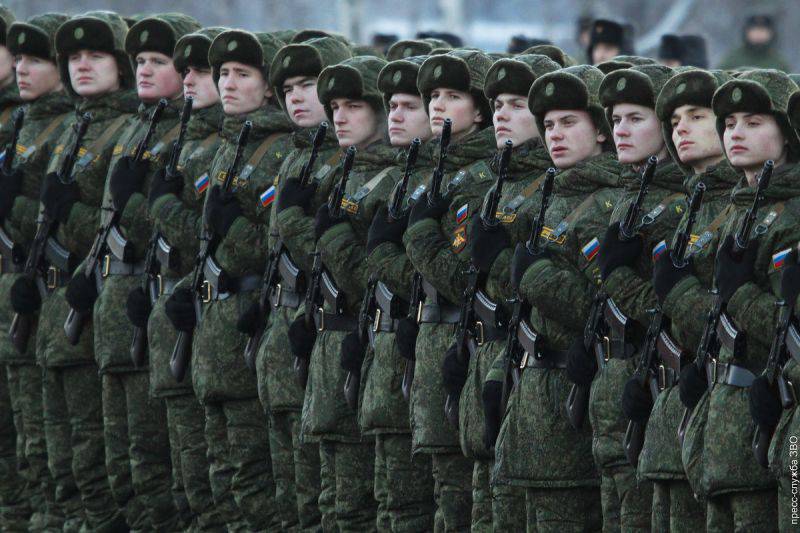 At the same time, the Ministry of Defense has been doing a lot lately to make a conscription service more attractive. So, relatively recently, the soldiers were completely freed from all types of economic work, which were transferred to civilian structures. The time freed up as a result was allocated for combat and physical training. For example, the time for physical training of military personnel was increased to 25 hours per week (4-5 hours every day), the official website of the Russian Defense Ministry reports.

In addition, progress has been made in improving the nutritional status of servicemen. A gradual transition is being made to the organization of catering for military personnel with elements of a full-fledged “buffet”, which provides a choice of main dishes. In the location of military units appeared showers and washing machines. The changes and the daily routine of conscripts touched. In particular, the duration of a night’s sleep was increased by 30 minutes, and in the afternoon the soldiers had an 1 hour of rest (sleep).

Also 29 September 2015, the Ministry of Defense explained the new procedure for issuing military uniforms to recruits before sending them directly to military units. This was explained in detail by the popular Russian blogger Denis Mokrushin. AT your blog He described the changes in the issuance of military uniforms. 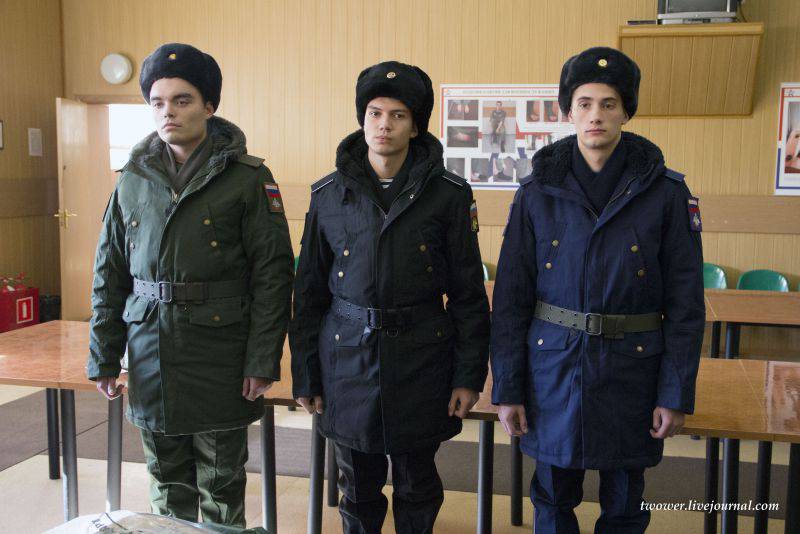 1. Instead of the all-season field uniforms (VKPO) recruits will give out a daily uniform (in military use - "office"). The peculiarity of this form are the different color solutions, which are different depending on the type of troops in which the recruit falls. Thus, conscripts who got into the airborne troops or airborne forces (aerospace forces), get a blue uniform. The sailors will be dressed in a black uniform, and the ground forces will get a green uniform.

2. Received VKPO recruits will be able to have on arrival in part of the duty station.

3. Order No. XXUMX “On Approving the Rules for Wearing Military Uniforms, Insignia, Departmental Insignia and Other Heraldic Badges in the Armed Forces of the Russian Federation and the Procedure for Mixing Existing and New Military Uniforms in the Armed Forces” will make changes to the “office” form, which was previously for soldiers, sergeants, foremen and cadets front, will now become everyday. Denis Mokrushin reminds that earlier a daily uniform for these categories of military personnel was considered a field outfit.

4. Directly at the recruiting station, conscripts will be given a sleeve insignia with the image of the national flag of the Russian Federation and the breastplate “The Armed Forces of Russia”. A badge with the name of a soldier will be made at the state expense. Previously, all the sleeve insignia and stripes of the servicemen bought independently for their money in parts.

5. In daily uniform, conscripts will decrease to their home after being fired from the ranks of the armed forces to the reserve, since WCPW has long periods of wear, it will need to be handed over.

Denis Mokrushin notes that the belt belts that were introduced in 2013 year, which until recently had not been properly treated with a metal buckle, because of which the belt itself quickly deteriorated and weared, were modified, all cutting edges were rounded. At the same time, recruits who got into the Airborne Forces and the VKS, "not lucky" with a green belt belt, which contrasts strongly with their blue shape. Such a belt is issued, since it is also necessary for them to receive WCPO. 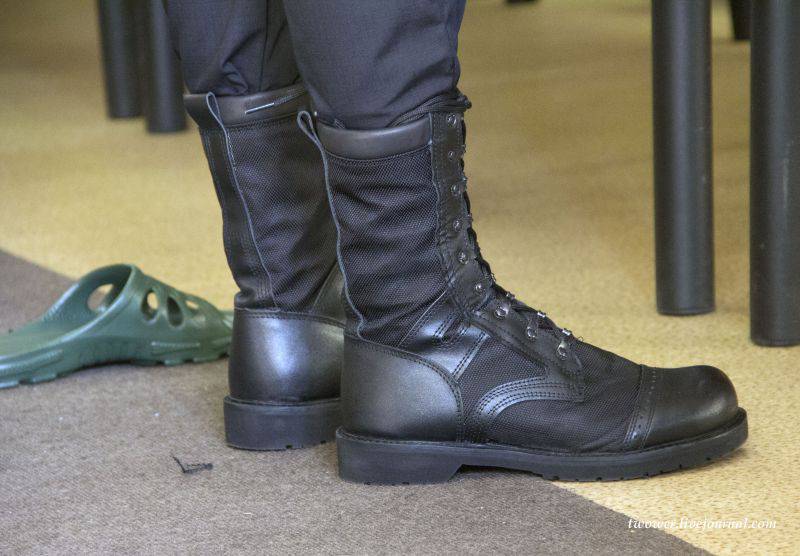 Since the autumn call is carried out during the cold season, conscripts will be given out underwear, as well as T-shirts (blue - VKS, protective - all the rest) and vests (fleet). At the same time, the blogger complained that only summer shoes would be issued to the recruits at the recruiting office (they can get the warmed ones only on arrival in the unit). In order to recruits did not freeze in the process of sending to the unit, they will be given warm socks, in addition, an instruction was sent about a strict ban on long-term construction on the street during the cold season.

The recruits of the autumn 2015 call-up of the year will continue to receive an “army dressing bag” (they started issuing from the spring of last year), which includes 20 items: shampoo-shower gel for men “two in one”; shaving gel and aftershave gel; toothpaste (75 ml) and toothbrush; hand cream; marching gel for washing; antiseptic hand gel; antifungal foot gel; roller deodorant for men; shaving machine and cartridge with replaceable blades; hairbrush; nail clippers; sewing kit; a set of patches; towel; silicone folding glass with lid; hygienic lip balm; mirror. All components from the bag have a design of the established pattern with the symbols "Voentorg" and "Army of Russia".

The logisticians who picked up this whole farm are confident that such kits will allow conscripts to feel quite comfortable even in the unusual conditions of the army barracks or naval Kubrick. To the pluses, they include the fact that the military will not have to spend money on the purchase of hygiene products necessary for soldiers. This kit is designed for the entire period of military service - that is, exactly one year. It is worth noting that these are pretty bold calculations, and it’s very difficult to imagine a soldier who will use one tube of toothpaste for a year, even if it’s very economical. So the military will have to deal with the purchase of "consumables" for the travel bag for their money in the same "Voyentorg". 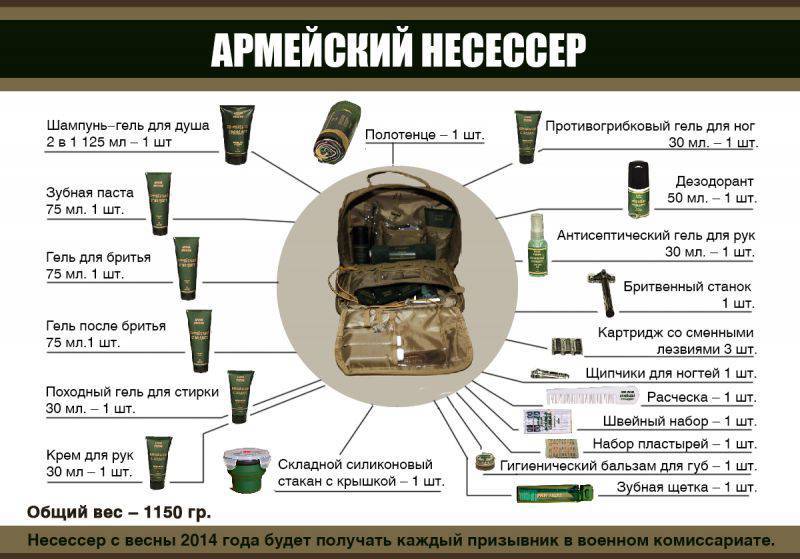 It has already become a tradition to issue servicemen of bank cards to which they are transferred money allowances and SIM-cards for communication with relatives. The innovation of the 2015 recruiting campaign of the year was the design of the soldiers for service. Starting from this year, a special electronic map is set up for each conscripted soldier, which contains all his personal biographical information: information about the profile specialty, health, driver's license, and so on. Thanks to such an electronic document, a recruit will be easier to appoint to a position that corresponds to his skills.

In addition, in 2015, the list of diseases with which service is now allowed in the ranks of the Armed Forces of the Russian Federation was again expanded. For example, conscription service became available for recruits with flatfoot 2 degree and scoliosis (curvature of the spine from 11 to 17 degrees). In turn, persons with disabilities I and II groups were spared from the lengthy passage of the military-medical commission; they only need to provide all the necessary documents that would confirm their state of health.

In 2015, the draft changes were made to the draft dodgers. From 2015, citizens who have not completed military service before 27 years, without proper grounds, are not issued a military ID. Together, they can get on hand only an ordinary certificate. In addition, citizens who do not have a military ticket are no longer eligible to apply for municipal and state employees.

Ctrl Enter
Noticed a mistake Highlight text and press. Ctrl + Enter
We are
Novelties of the autumn draft in RussiaRecruits lured to NATO for 500 rubles a day and iPad 2
26 comments
Information
Dear reader, to leave comments on the publication, you must to register.