To Russia - with love

Why is the government afraid to develop their own country?

RBC holding experts have prepared beautiful statistics on the places of registration of the largest Russian companies. The results are both predictable and monstrous.

It is not difficult to guess in which region 296 from 500 of the largest (by revenue) Russian companies is registered. We add that these Moscow enterprises have 78,5% of the total revenue of participants in the RBC 500 rating ... And a significant part of the taxes on this money remains in the capital.

For comparison: in the American Fortune 500 list, the most companies are registered in the state of New York, but this is only 48, less than 10%.

And it is this fact that determines the key difference between the Russian Federation and the United States, which is much more serious than all the chatter about political systems and global interests. Russia is historically centripetal, America is centrifugal. We gathered around Moscow and in the name of Moscow, the Americans did not go to the frontier for the sake of Washington or New York. But from this distinction of communal and individualistic creation, quite concrete economic consequences follow.

But first, a retreat about politics. The political system of the Earth, like the whole Universe we observe, is at the stage of expansion: separatism obviously dominates over unity. Over the past decade alone, several new, fully or partially recognized states have appeared on the world map, two Ukrainian regions, Catalonia, Scotland, Quebec, are seriously looking at the exit ... Under these conditions, Russia, the most multinational state in the world, simply has no other way to preserve unity territory, in addition to tight centralization, inevitably combined with elements of authoritarianism. When Konstantin Leontyev said that “Russia needs to be frozen”, he meant precisely the struggle against entropy, which already today is taking possession of the world in an obvious way.

However, the inevitable imperial habit of subjecting economic expediency to political interests led to the centralization of not only politics, but also the economy. Moreover, two attempts at economic decentralization undertaken in the country after the war did not give good results.

Sold by Nikita Khrushchev, the administrative and economic reform of 1957 of the year replaced the sectoral leadership by the territorial one. If earlier a small textile factory in Ivanovo was ultimately subordinate to the Allied Ministry of Light Industry, then from that moment on - the Economic Council of the Ivanovo Region. Like any drastic reform, this resulted in a violation of the existing ties, and Khrushchev could not reverse the “verticality” that had become firmly established in Stalin's time, and the hierarchy of management thinking. A new round of centralization began when Nikita Sergeevich was in power. His undertaking cannot be called a complete failure, but it returned to the former mode of management with relief.

The second decentralization was spontaneous: at the end of the USSR and immediately after its collapse, in the midst of a severe economic crisis, regions unwittingly switched to semi-natural economic management, barter flourished, and economic separatism followed. The integrity of Russia was saved only because of the lack of own funds from the regions and the need to turn to the center for oil and gas money, which only kept the remnants of the economy afloat. Yeltsin’s generous slogan "Take sovereignty as much as you can" did not have the financial support and only for this reason it was not implemented.

The rest of the time, the political and economic systems are constantly centralized. The Russian Federation has long been no longer a federation in its essence: regional parties are actually (until recently and formally) banned from us, and the income of the subjects takes the center for itself and then redistributes it at its discretion. Unfortunately, we consistently pay for the consistent implementation of the ideas of centralization with severe distortions in the development of the regions and force the economic dying of parts of the country with our own hands, such as, for example, the Pskov region with its phenomenal governor, dozens of abandoned villages and a constantly decreasing population.

In this case, it cannot be said that we have never moved in the right direction. The development of virgin soil (from Stolypin to Brezhnev), Siberian construction projects, the great resettlement of Komsomol members are excellent examples of a rational attitude to their own country. The most important role in the development of the regions, primarily the Urals, was played by the Great Patriotic War: the factories that moved from the west of the country still have considerable significance for the local economy. But all this was carried out according to the same vertical scheme: the region will live and develop as they say in Moscow. Where, of course, far from always sensibly represent the real situation.

All roads - in the third Rome

The radially concentric layout of Moscow marks Russia: all roads lead to the center, the path between the neighboring border regions can be embarrassingly difficult (from East Biryulyovo to West - via the Moscow Ring Road or the Third Ring).

From the largest city of the Lower Volga region, Volgograd, it is easy to get to Moscow by train (900 km), but there is no direct road (neither automobile nor iron) to the Black Earth Region of Voronezh (500 km).

With what hatred did Russia have to be equipped, that after, for example, the terrorist attacks in the same Volgograd, it was necessary to allocate a special board to transport the injured to Moscow? And we know that the same thing would have to be done at any other point of the Russian Federation, with the careful exception of St. Petersburg. We do not have regional medicine, there is little regional education. 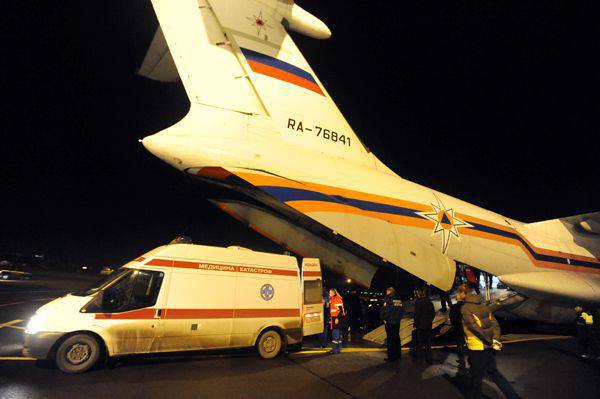 An ambulance car at the Emergencies Ministry plane at the Volgograd airport during the transportation of seriously wounded people after an explosion in a LiAZ passenger bus. Photo: Dmitry Rogulin / TASS
We are investing in the construction of the Moscow-Kazan high-speed railway, and from Kazan to the neighboring regional center of Ulyanovsk there is a single-track non-electrified branch.

We no longer build cities near mineral deposits. Once, the Urals giants Chelyabinsk and Yekaterinburg appeared exactly this way, but now nobody perceives a place of work and earnings as a permanent place of residence.

The saying “Where he was born, it was useful there” sounds like an absolute anachronism: hundreds of thousands of people cross 100 – 150 km at one end every day to work in any prestigious place. This is completely meaningless loss of funds and man-hours, which hardly anyone will take to calculate.

New development of the Pskov region

There is not and cannot be a truly united Russia without permanent close ties between neighboring regions, and equal relations, and not like in Yasnogorsk, Tula region, from which hundreds of adults go to Moscow every day or every week - 150 km one way. Such a “unity”, in which Moscow is the only center of gravity on 17 million km2, does not need Russia or Moscow itself. 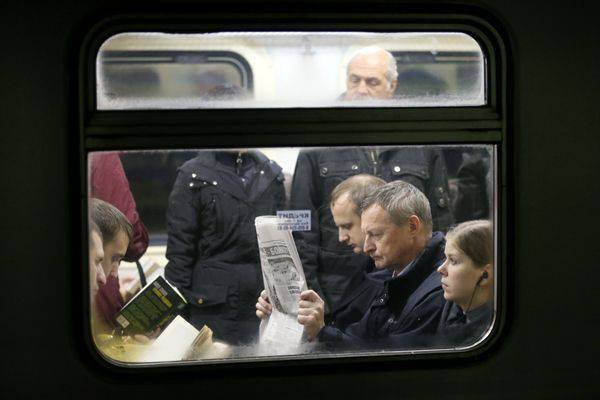 Suburban train at rush hour. Photo: Pavel Smertin / TASS
Unfortunately, the designated problem has such deep roots, so serious traditions, it has become so familiar with the mentality that it must be solved gradually and delicately. The simple guys from the Ministry of Economic Development, apparently, derived a simple formula: “Business cannot develop in a poor region, because there is no effective demand, and demand cannot appear, since there are no jobs with adequate pay,” which means that nothing can be done and you need to quietly build stadiums for the World Cup.

Meanwhile, the development of regions exist, but require state planning. We now have no resources for the next development of Siberia? Well, let's learn, for example, the same Pskov region: we will build there roads (not pathetic highways, but narrow, but high-quality routes of regional significance), carry gas to the surviving settlements, place a small part of the state defense order at enterprises, in the end, for this and built people who were certainly not smarter than us.

Of course, there must be a response, a reciprocal movement from the outskirts to the center. Velikoluksky meat-packing plant is known throughout Russia, the enterprise works perfectly, but it is the only trade brand in the region. We need new ones - either in the same food industry or in other areas, for example, in tourism. The region is the only subject of the Russian Federation that has a border with three states at once. Consequently, this is a great place for eco-and ethno-tourism, and here everything again rests on the infrastructure. Roads and gas, if carried out without embezzlement, are inexpensive and pay for themselves quickly. Now more than half of the tourists in the Pskov region are residents of St. Petersburg and its environs, and yet the potential of the region is much wider.

This is just one example. Each region has its own potential, but the development of this potential is not a large-scale national project, but a point investment of small money with a medium-term payback. It seems that this is why such things are of little interest to the federal government.

From Moscow to Russia

Returning to the beginning of the article, we emphasize that the government has one more task: the economic squeezing of a large but not focused on the capital business from Moscow. There is nothing impossible here - Gazprom has moved to St. Petersburg and is doing well. What the Russian Railways is doing in the capital, for example, is clear: it “milks” the stations, but, really, such an organization would be more decent to be in the geographical center of the country. The metallurgical giant Evraz or the raw material Norilsk Nickel have no relation to Moscow at all. MTS and X5 Retail Group are operating throughout Russia and could well be located in other major cities. You can, of course, regret the staff of the head offices of these companies, who would have had to leave the capital, but their appearance in Novosibirsk or Omsk would have provided serious assistance to the relevant areas.

Much of what has been said sounds like a utopia. But without the realization of this utopia, we will not achieve anything. The nuclear bomb and the well-being of the people are much more convincing than just a nuclear bomb. From the development of the regions there will be no damage to political centralization and autocracy.

Moscow is the heart of Russia, but obesity has been diagnosed in this heart, and at least a diet is shown to it. The prosperity of Russia is the prosperity of every corner of it. If we want to have a loud and respected voice by the entire planet, we need to become an example of prudent and conscientious business ourselves. Brilliant Moscow, St. Petersburg and Kazan can not forever close the ghost 23 thousands of populated areas disappeared from 1990.

Real import substitution should take place not on the shelves, but in the minds of people, and first of all, people making important decisions for the country.

Ctrl Enter
Noticed a mistake Highlight text and press. Ctrl + Enter
We are
Revealed the secret of provocation in the American BostonThe best main battle tanks of the world 2012 of the year
101 comment
Information
Dear reader, to leave comments on the publication, you must to register.