Poland is undoubtedly responsible for the outbreak of world war. 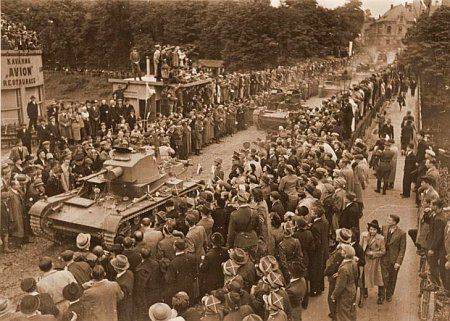 On September 28, Russian Ambassador Sergei Andreev was summoned to the Polish Foreign Ministry. The reason for this, according to Foreign Minister Grzegorz Schetyna, was an interview with S. Andreev on TVN 24, in which the ambassador declared that Poland “has partial responsibility” for the catastrophe of the Second World War. The minister described these words as “offensive”, resulting “from misunderstanding stories and the fact of how unjust and untrue they are. ” In a special report of the Polish Foreign Ministry, the statements of S. Andreev were described as undermining the “historical truth” and harming the Polish-Russian relations.

The view of Poland as an exclusively victim of Hitler’s aggression, which was established in historiography and public consciousness, for many decades evoked only natural sympathy for it. However, this view is only partly correct, and empathy for the victim of aggression cannot overshadow the whole picture of what happened in the 30 of the twentieth century. Both international law and criminal law know quite a few examples when not only random subjects (countries or people) but also accomplices of crime became the object of aggression on the part of the criminal. It is not by chance that, in her reaction to the words of the Russian diplomat, Mr. Shetyna and his subordinates didn’t go further than emotion and lamenting about the “lack of understanding of history”: there is nothing for them to cover.

The Russian ambassador, recalling that during the 30 of the last century, Poland had repeatedly blocked attempts to create a coalition to contain Nazi Germany, said far from everything. In fact, Poland did not just put a spoke in the wheels of the forces that were trying to create a collective security system in Europe, and above all to the Soviet Union, but also directly solidarized with Hitler’s expansionist plans.

When September 30 1938 in Munich, Prime Ministers of Great Britain and France N. Chamberlain and E. Daladier put their signatures next to the signatures of A. Hitler and B. Mussolini under the agreement that had committed the aggressors to Czechoslovakia for slaughter, in Warsaw they rubbed their hands in waiting for an easy profit. Back in May, French Foreign Minister J. Bonnet told the Polish ambassador that the plan "on the division of Czechoslovakia between Germany and Hungary with the transfer of Cieszyn Silesia to Poland is not a secret." Warsaw, the very next day after the signing of the Munich Agreement, demanded that the Cieszyn region (Cieszyn Silesia) be handed over to her and, without waiting for an official response, occupied Czechoslovak territory. Here the Poles even outstripped Hitler, who gave Czechoslovakia to clean the Sudetenland region, inhabited by the Germans, 10 days.

Note by the Ambassador of Poland in Czechoslovakia K. Pape to the Minister of Foreign Affairs of Czechoslovakia K. Krofte from September 30 1938 is a tracing from the Hitler note to Prague regarding the Sudetentes: the same references to the “intolerable position” of the Polish population in Teshino Oblast, the categorical conclusion that only the “territorial concession” of the respective territories in favor of Poland can normalize bilateral relations and, moreover, impose responsibility for the consequences on the Czechoslovak side in the event of its refusal to fulfill the impudent demands of Warsaw.

The coercion of Czechoslovakia was committed by the will of the Western democracies. But there was still the Soviet Union, which could disrupt the plans of the Munich Four, because it was bound by a treaty of mutual assistance with Czechoslovakia. True, the fulfillment of this treaty required one important condition: that the Red Army could cross the Polish territory separating the USSR from Czechoslovakia. Poland categorically rejected the request for the passage of troops, which was brought to the attention of all interested governments. Thus, the Polish ambassador in Paris, Yu. Lukasevich, assured his colleague from the USA, W. Bullitt, that his country would immediately declare war on the Soviet Union if it tried to send troops through its territory to the borders of Czechoslovakia.

Not everyone in Europe was so naive not to understand that the territorial concessions on the part of the Western democracies at the expense of third countries would only incite Germany’s appetite for new acquisitions, and Hitler should be put in a bargaining agreement with Moscow. In opposition, Winston Churchill told the House of Commons: “We will be in mortal danger if we cannot create a great alliance against aggression. It would be the greatest folly if we would reject the natural cooperation with Soviet Russia. "

21 March 1939 British Ambassador William Sids presented the USSR People's Commissar for Foreign Affairs MM. Litvinov’s draft declaration of Great Britain, USSR, France and Poland, according to which the governments of four countries undertook to “confer on the steps that should be taken for general resistance” to actions that “threaten the political independence of any European state” and affect the world and security in Europe. Although the project was extremely vague and did not suggest effective action to curb the aggression, the Soviet government agreed to sign it on March 23. Poland also gave a negative opinion on the project. London, citing its position, a week later abandoned its initiative.

The short-sighted stance of Warsaw had a fatal effect on the fate of the military convention of the USSR, Great Britain and France, which had not become a reality, which, if signed, would have created a military fist against which Hitler would not stand. Moscow negotiations on the conclusion of such a convention were held in August 1939. The capacity of the document largely depended on the positive decision of the “cardinal issue” - such a definition in the diplomatic correspondence received the consent of Poland and Romania to pass the Red Army troops through their territory.

The report of the subcommittee of the English Chiefs of Staff Committee, submitted to the 17 Cabinet of Ministers on August 1939, contained a recommendation of the following nature: “Concluding a treaty with Russia seems to us the best way to prevent war. The successful conclusion of this treaty will undoubtedly be jeopardized if the proposals on cooperation with Poland and Romania put forward by the Russians will be rejected by these countries ... We would like to emphasize that, from our point of view, if necessary, the strongest pressure should be exerted on Poland and Romania, so that they give consent in advance to the use of the territory by the Russian forces in the event of a German attack. ” However, the British Cabinet was drawing, hoping to reach an agreement with Germany behind the back of the USSR, and declined the pressure in Warsaw that was necessary in this case.

More optimistically, the head of the French delegation at the Moscow talks, General A. Dumenc, and the French ambassador to Moscow, E. Najiyar, assessed the condition of the Soviet delegation with regard to Poland as justified. In a telegram sent by 15 August to Paris, Nadzhiyar wrote: “We are offered precisely certain assistance in the East and do not put forward any additional demands for help from the West. But the Soviet delegation warns that Poland, by its negative position, makes it impossible to create a resistance front with the participation of Russian forces. ”

The “cardinal question”, on which the fate of the military convention of the three countries depended, was never resolved: Warsaw and Bucharest shied away from the prospect of passing Soviet troops, as hell with incense. In the evening of August 19, Marshal E. Rydz-Smigly (in fact, the second person in the state after the president) said: "Regardless of the consequences, not a single inch of Polish territory will ever be allowed to be occupied by Russian troops." Foreign Minister J. Beck told L. Noel, the French ambassador to Warsaw: “We will not allow any form ... to discuss the use of part of our territory by foreign troops.”

The chance that Moscow talks provided for the formation of a united anti-fascist front in Europe was missed. The Soviet leadership, set before the prospect of being in international isolation, went to the signing of the Soviet-German non-aggression treaty, which in Western capitals and in Warsaw has long been trying to announce the trigger of World War II. No need to shift from a sore head to a healthy one, gentlemen. You yourself have done everything to whet Hitler's appetites, but contrary to your anti-Soviet plans, you yourself were hit by the aggressor.

Poland had to regret its short-sightedness, becoming the next victim of Nazi Germany. The Poles did not notice the shadow of the imperial eagle advancing from the west with a swastika in its claws, being passionate about first the prospect of participating in the section of Czechoslovakia, and after 30 of September 1938 of the year - and the rejection of Cieszyn Silesia from it.

Such actions of the Polish military and diplomacy gave W. Churchill the undiplomatic name of Poland as the "hyena of Europe". A hyena is an animal so well known for its existence that there is no need to explain why the former British prime minister resorted to this analogy.

By the way, having participated in the section of Czechoslovakia, Warsaw also dreamed of the division of the USSR. Back in December, 1938 in the report of the intelligence department of the General Staff of the Polish Army emphasized: “The dismemberment of Russia lies at the basis of Polish policy in the East ... Therefore, our possible position will be reduced to the following formula: who will take part in the section. Poland should not remain passive at this remarkable historical moment ... The main goal is to weaken and defeat Russia. ” Poles were not limited to staff development. In January, 1939, in negotiations with his German counterpart, I. von Ribbentrop, the Polish Foreign Minister J. Beck drew the attention of the interlocutor to the fact that "Poland claims to be Soviet Ukraine and to access to the Black Sea."

It should be understood that the Polish Army was going to join the Wehrmacht on these frontiers.

... True, his eyes hurt. Having no weighty arguments as opposed to the statements of the Russian ambassador, Poland threatens him with expulsion. We dare to give such politically sensitive Polish politicians a piece of advice: at the same time throwing the works of the Nobel Prize in literature Winston Churchill to the dump, with the skill of an outstanding politician and an outstanding writer who printed the “hyena” to the pillory. Against the background of Churchill's statements about Poland, Ambassador Andreev’s assessment is the height of diplomatic delicacy.