October 28 2015
7
At the beginning of the 1915 of the year, the Putilov factory built four Russo-Balt Type T anti-aircraft armored vehicles armed with 76,2-mm anti-aerostatic guns, as well as four transport vehicles based on the Type M chassis. Already during the first tests, this technique showed its real capabilities and was able to interest the military. As a result, the Defense Ministry ordered several more armored cars with anti-aircraft guns, which were planned to be used for air defense of the troops.


Soon after the first Type T armored vehicles, several anti-aircraft self-propelled guns were built on the basis of White trucks. As the basis for such combat vehicles, a five-ton truck chassis was used, on which a cargo platform with a gun mount and some other units was mounted. An important feature of the White anti-aircraft self-propelled guns was the absence of any reservation. To simplify and speed up the work, it was decided not to equip this technique with armor, leaving the native hulls and elements of the on-board bodies. The artillery unit and outrigger stops were borrowed almost unchanged from the previous project.

Features of the proposed operation of machines with anti-aircraft weapons allowed to do without armored corps, since this technique should not work at the front edge. However, later it was decided to return to the previous ideas and equip self-propelled self-propelled guns with armored units. The result was the emergence of a new anti-aircraft armored car, known as the Austin. 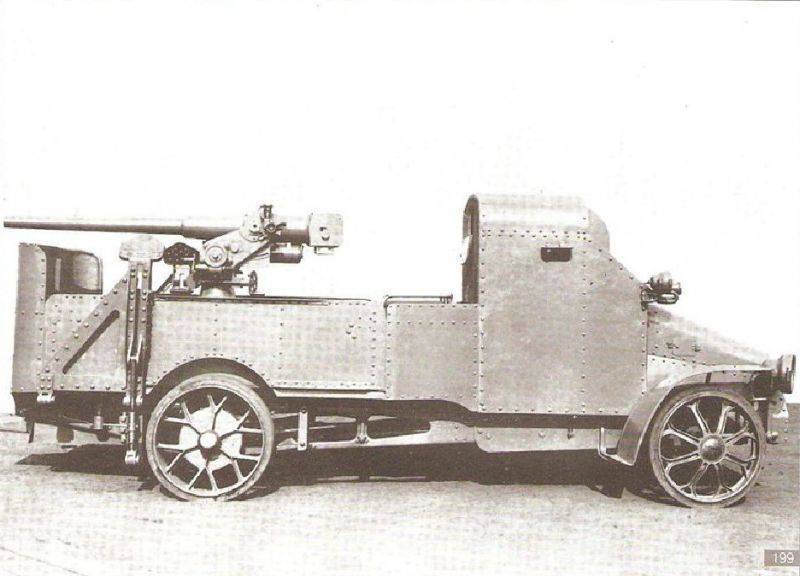 One of the prerequisites for the appearance of the Austin armored car was the work that started in August 1914 at the Putilov factory. The company's specialists began developing a project to modernize the existing Hotchkiss gun of 57 mm caliber, the purpose of which was to ensure firing with large elevation angles. Increasing the maximum elevation angle to 65 ° allowed the use of the gun for firing at air targets: balloons and aircraft. By this time, the military understood the prospects aviation and began to actively use various aircraft. As a result, the need arose for counteracting enemy aircraft.

By the spring of 1915, the Putilov factory completed all the modernization of the gun and proposed this development to the military. The military department, in turn, became interested in the updated tool and ordered the modernization of existing products to begin. By order of the Main Artillery Directorate, the plant was to produce and present the first batch of four modernized guns over the next few months. This weapon was planned to be used as a weapon for new anti-aircraft armored cars.

In order to simplify the work on the new design of anti-aircraft armored car, it was decided to use not only existing ideas, but also some ready-made units. Thus, a promising armored car was to be built on the basis of the existing truck chassis. The car was supposed to get a protected driver’s cab borrowed from an existing armored car, as well as a platform body with the installation of a gun.

Despite borrowing some ideas and aggregates, the armored car of the new type should have been markedly different from the existing “Type T”. The fact is that for the construction of new cars it was proposed to use English-made three-ton trucks of the Austin brand. The limited characteristics of this machine affected some of the design features of the armored hull and auxiliary units.

The overall design of the armored hull was borrowed from the existing project. Full booking should receive only the engine compartment and the driver's cabin. The loading platform with the installation for the gun was protected only by low flaps, which covered the calculation and units exclusively in the stowed position, as well as the feeding sheet. In addition to the general architecture, it was decided to borrow some ready-made units, primarily the cabin.

The basis for the new anti-aircraft armored car was taken truck chassis "Austin". It had a traditional frame design and chassis with the wheel formula 4 XX2. In front of the frame housed a petrol engine with a power 30 hp, behind which was located the cabin. In the basic configuration for the cabin was onboard body. The chassis had a dependent suspension with mounting bridges on leaf springs. There was a chain drive to the rear drive axle in the transmission.

When reworking an armored car, the existing chassis lost some units and received a set of new ones. In the front of the frame, an armored case was mounted that covered the engine and the driver. The body was assembled from armor plates with a thickness of 4-6 mm (according to other data, 3,5 mm) on the basis of the frame. The protection of the gun platform had a similar construction. Available armor plates provided protection against small arms. weapons. Nevertheless, the actual protection characteristics left much to be desired due to the open placement of the weapon and its calculation.

Small-sized 30-strong engine closed the hood of a characteristic design. Behind a small vertical frontal sheet were provided vertical sides and curved roof sheets. Because of the specific shape of the upper sheets, the bonnet had a characteristic shape, which made it possible at first glance to distinguish the Austin armored car from the Russo-Balt of the previous model.

Anti-aircraft self-propelled gun "White". Behind her is a transport vehicle on a similar chassis. Photo Aviarmor.net

Behind the engine compartment was installed cab borrowed from the machine "Type T". Immediately behind the engine was a rectangular vertical front sheet, above which an inclined sheet was provided with an inspection hatch. On top there was another small vertical sheet. The vertical sides of the cabin were large pentagonal sheets with a sloping front. In the left side there was a single door through which both drivers had to fall into place. In addition, inspection hatches with covers were cut in both sides. A curved roof protected the cabin from above, a vertical armor plate behind it with a window to communicate with the gunners.

Directly behind the cabin began the vertical sides of the open gun platform. To simplify and facilitate the design of the board was divided into two parts. The front fixed part of the board was the side wall of the box for ammunition. The rest of the board was hinged and could fold back and to the side, increasing the size of the area available for the calculation of the gun. In the horizontal position, the boards were held by several chains. Behind the platform was covered with a curved forage sheet. For some improvement in protection, the forage leaf was slightly above the sides.

In the center of the cargo area, directly above the rear axle, it was proposed to mount the cabinet for mounting the gun. The gun attachment mechanisms provided a round-trip in the horizontal plane with the exception of a small sector in which the driver's cabin was located. The hochka of Hochkiss, modified by the Putilov factory, allowed to fire with elevation angles up to 65 °.

For the attack of air targets, the calculation of the Austin armored car was to use a Hochissss X-mm gun with a barrel of X-NUMX caliber length. The ammunition of the gun included a steel grenade weighing 57 kg and a carcass projectile weighing 40 kg. In the case of a grenade, the initial velocity of the projectile reached 2,73 m / s. The maximum effective range of fire reached 3,69 km, which made it possible to attack targets at low altitudes.

Gun ammunition consisted of 44 shells of two types. It was proposed to transport ammunition in a special box located on the site directly behind the cab. The lid of the box was equipped with a pillow, so that it could be used as a seat for the transport of gun crew. A similar seat provided on the stern sheet.

The large weight of the machine’s units and the relatively powerful impact of the guns could damage the suspension, which is why outrigger stops were used in the design of the armored car. At the rear of the chassis, there are two drop stops with powerful main beams and reinforcing struts. In the stowed position, the outriggers rose to a vertical position and secured on the sides.

According to reports, after installing all the necessary units, the combat mass of an anti-aircraft armored car reached 327 pounds (about 5,23 t). Thus, the chassis worked on the limits of its capabilities, but the 30-strong engine made it possible to maintain acceptable mobility. The maximum speed of the armored car on a good road reached 35 km / h.

The crew of a combat vehicle consisted of eight people. Two drivers were in charge of driving the armored car. The calculation of the gun included six people. In the stowed position, the drivers were located in the armored cockpit, the gunners - on the seats of the open area. When preparing for combat work, the artillerymen had to lower the stops and lay out the boards, as well as take their places near the gun. 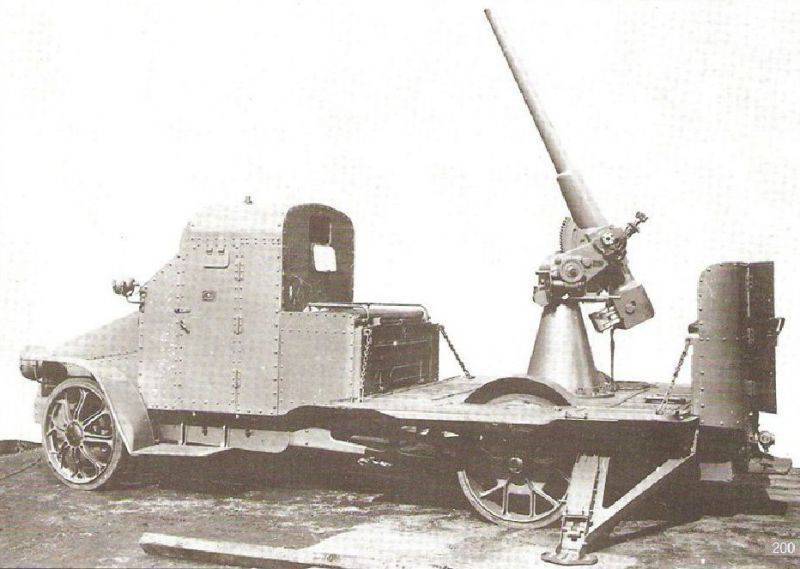 The construction of the first Austin-type armored car with an anti-aircraft gun was completed at the very beginning of the summer of 1915. Already in June, the car went to the Artillery range, where they started testing the armored car itself and its weapons. The proposed combat vehicle showed itself well and interested the military. It was decided to start the serial construction of such equipment and form a new battery "for firing aerial the fleet».

The first production Austin, with the upgraded Hotchkiss cannon, could be put into operation in the fall of 1915, but the combination of circumstances prevented this. At one of the military warehouses of Brest-Litovsk, a fire occurred. All the available Hochissss 57-mm guns that were planned to be used in the construction of anti-aircraft armored cars were killed in the fire. As a result of the fire, promising armored cars were left without weapons.

The only built armored car of the new type was in the rear until the end of 1915. Only at the end of autumn (according to other data, in December) did he find a place in the active army. Anti-aircraft "Austin" replenished the fleet of equipment 1 th tractor division.

Information on the operation of this armored vehicle is not available. Apparently, for some time it was used for its intended purpose, to counteract the actions of enemy aircraft. "Battle account" self-propelled guns is unknown. It can be assumed that the "Austin", like its predecessors of the "T" model, was able to knock down or damage a number of enemy airplanes. However, accurate information about the combat work of the armored car is not available.

When and how the service ended the only "Austin" is also unknown. It is possible that this machine successfully carried out the assigned tasks until the very end of the First World War and was later written off for developing a resource. However, it cannot be excluded that in one of the battles it was damaged or even destroyed. Unfortunately, the Austin anti-aircraft armored car added to the sad list of unique domestic combat vehicles, the fate of which история not saved.