October 1 2015
6
Currently, the UK is experiencing serious difficulties with the organization of anti-submarine defense. In recent years, the Royal Naval anti-submarine potential fleet и aviation decreased significantly. The ability to recreate a full-fledged system for tracking water areas and searching for submarines of a potential enemy is still very limited. Nevertheless, new projects are proposed, with the help of which the former "mistress of the seas" will be able to some extent restore its anti-submarine defense.


Recall, after a series of reductions and write-offs of outdated technology, the UK was left without combat-ready anti-submarine patrol aircraft. Because of this, the tasks of anti-submarine defense are assigned to the surface fleet and helicopters, which seriously limits the size of the controlled waters. In addition, the current state of anti-submarine defense leads to unpleasant situations. So, in December last year, official London was forced to ask NATO allies to help with the search for a supposedly Russian submarine found near the coast of Scotland. Search submarines had to do aircraft of other countries.

Over the past few years, the further fate of the British anti-submarine defense has been actively discussed. The most widespread version of the possible purchase of American aircraft Boeing P-8 Poseidon, which can effectively solve the assigned tasks at a great distance from the coast. In addition, it was proposed to strengthen the air force reconnaissance unmanned aerial vehicles with special equipment. The purchase of foreign equipment would allow the British military to restore anti-submarine potential, but it would necessarily lead to serious spending of budget funds. 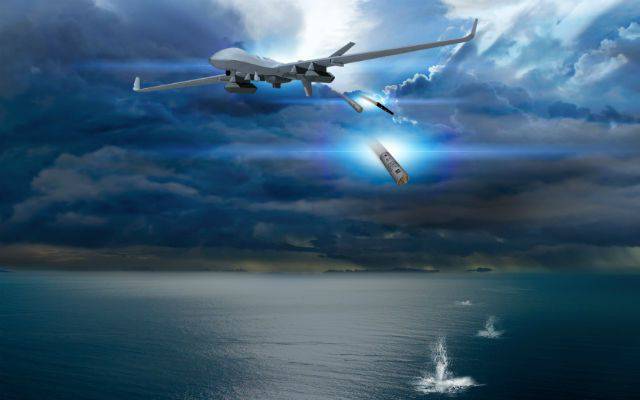 Reset the buoy in the artist's view

A few days ago, the American company General Atomics Aeronautical Systems offered its solution to the problem of the Royal Navy. According to experts of this organization, drones with special equipment should become the main air component of the anti-submarine defense. It is assumed that this technique will be able to replace full-fledged patrol aircraft at a much lower price.

24 September on the basis of the Caldrose fleet aviation conference was held on the current state and prospects of detection systems. During this event, the American company presented its new development. The General Atomics project involves the refinement of the existing MQ-9 Guardian UAV, after which it will be able to carry radio-acoustic buoys.

It is reported that a new project has been developed over the past two years. Anti-submarine version of the drone MQ-9 was created with the active participation of specialists from Ultra Electronics. To date, the project has gone through several first stages and is approaching the stage of testing new equipment.

The head of the British branch of General Atomics Aeronautical Systems, Johnny King told some of the features of the project. According to him, the modified UAV will be able to carry and drop radiohydroacoustic buoys of a new type, designed to detect enemy submarines. In addition, the aircraft will receive signals from buoys and transmit information to the command post using existing communication and control systems.

According to J. King, by now the components of the prospective anti-submarine complex have been tested under laboratory conditions, and also managed to reach ground tests. According to earlier plans, the flight tests of the complex should have been launched before the end of 2015. However, this stage of inspections had to be moved to the beginning of the next year. The aircraft, which was planned to be used in these tests, was involved in another program with a higher priority.

The required equipment will be available again only at the beginning of the next year. Thus, flight tests of the MQ-9 Guardian with anti-submarine equipment start only in the first months of the 2016 year.

Already announced some details of future tests. So, in the first test demonstrations, the UAV will be used with a set of special equipment and simulators of radio-acoustic buoys located on the land range. During these tests, the drone will have to patrol over a given area, receive information from simulators and transmit it to the command center. Naturally, the real work of the complex will look different, but first you need to take the first step and check the performance of all systems.

The edition of Flight Global reminds us that since 2012, General Atomics has been working with Selex on a modification of the MQ-9 UAV, equipped with a front-bodied overhead container with a radar 7500E. Such a system, which has an active phased antenna array, will significantly increase the intelligence potential of the base drone, complementing its “native” optical positioning system. Also, the equipment of the device will include communication equipment and the identification system “friend-foe”. In addition, there are some other developments aimed at the further development of the existing technology.

Anti-submarine drone based on the MQ-9 Guardian, according to J. King, will be able to patrol for 12 hours. At the same time, at any moment of the flight, a buoy may be discharged followed by monitoring the situation in the area. 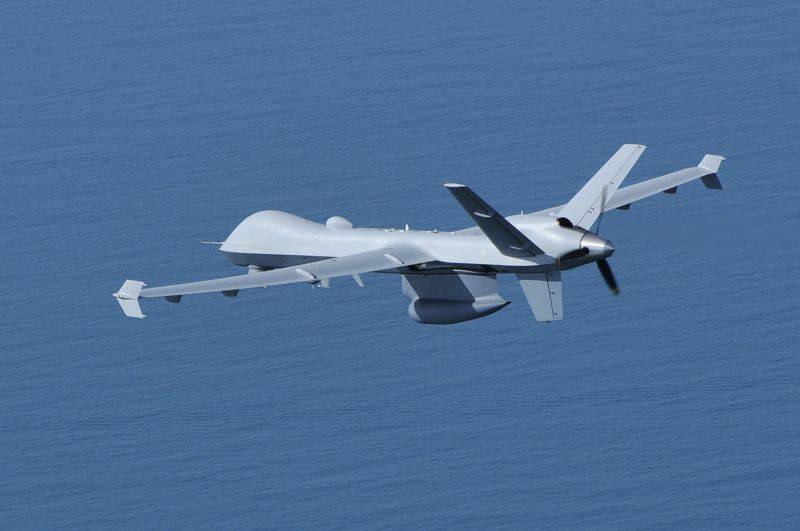 There is also a project to upgrade the UAV, aimed at increasing the range and duration of the flight. So, with the help of a modified wing and a set of additional fuel tanks can significantly increase all the basic parameters. In the basic version, the MQ-9 has an 1000 range of nautical miles (about 1850 km) and is able to hold in the air for about 10 hours. Additional tanks increase the range to 1900 nautical miles and add 10 hours to the maximum flight duration.

The project of equipping the drone MQ-9 with special anti-submarine equipment was first presented just a few days ago, which is why its future prospects should be the subject of numerous disputes. Whether this project was able to interest the British commanders - has not yet been reported. In its present form, the project of anti-submarine UAV is of particular interest, since it allows to seriously strengthen the existing anti-submarine group without extra large expenditures.

It can be assumed that in the future the new development of General Atomics Aeronautical Systems will be subject to a contract, with the result that the Royal Navy will receive a new technique. At the same time, the purchase of anti-submarine drones does not negate the possibility of acquiring full-fledged patrol aircraft. What will be the final decision of the British command is not yet clear.

The most likely option is the simultaneous purchase of aircraft and unmanned aerial vehicles. In this case, British naval aviation will receive a number of P-8 Poseidon aircraft and several MQ-9 Guardian UAVs. The exact number of two types of equipment to be determined by British experts, based on the needs of the fleet and the financial capabilities of the military department. Nevertheless, regardless of the exact amount of equipment, the "combined" acquisition of anti-submarine defense will allow to achieve some savings.

However, while the British military did not comment on the proposal of General Atomics Aeronautical Systems. Probably, it is too early to draw conclusions about the prospects of the proposed UAV, since it has not yet been fully tested. The first flights of the drone with a set of special equipment, during which its real capabilities will be determined, are scheduled for early next year. Then you can expect the first reports of plans for the command of the Royal Navy.