Putin at the UN: it was better than Munich 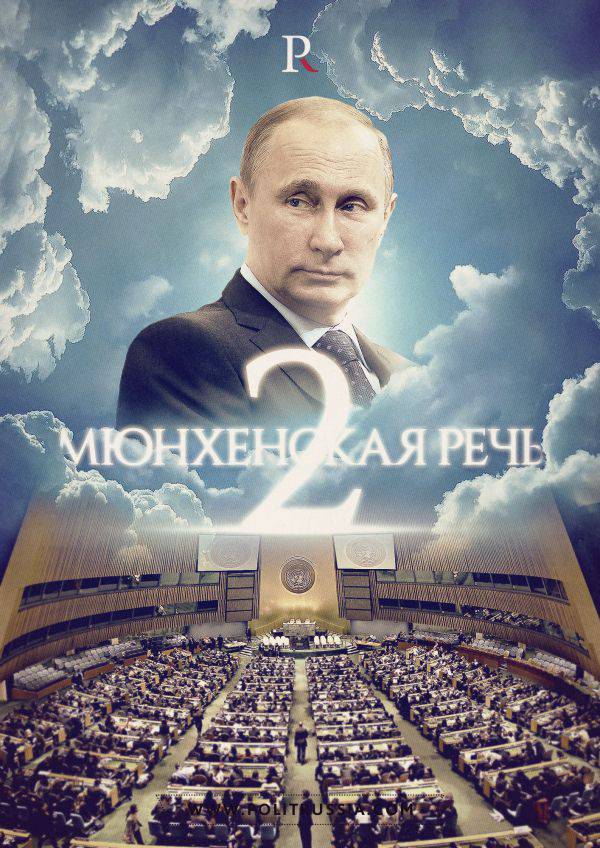 Let's fix a simple thing that is absolutely necessary to understand what happened in New York. The Kremlin, and it is absolutely obvious, is going to do away with the IS. This will solve several Russian problems at once and will give Russia some tangible bonuses:

1. We will eliminate the terrorist threat to our country on the distant approaches. Each IGovets killed in Syria is an IGovets who did not come to fight in Russia;

2. Having retained control over Syria, we will permanently close the Qatar-EU gas pipeline project, which the United States so dreams of. The Russian gas noose around Europe’s neck will remain in place, and this is very important;

3. Having liquidated the IG in Syria and Iraq, we will block supply of contraband oil to the world markets, which is sold at dumping prices. This action alone will pay for any military operation against the ISIS within a few months, if not several weeks;

4. Russia, leaving its gas noose around the EU’s neck, removes another noose from the EU’s neck - an American noose in the form of an influx of refugees allegedly fleeing the IG. American NGOs that massively organize "the outcome of Arabs in the EU" will have to curtail their work, since after the IS defeat of the IG, it will be impossible to force the inhabitants of the EU to accept millions of refugees, even if they are shown hundreds more of the staged photos with children's corpses;

5. Russia will fix itself as the main "security provider" in the Middle East. This position is costly in the most direct sense, since the main trade routes of the planet intersect in the Middle East and the main sources of hydrocarbons are also located there.

At one time, Putin blocked the US military intervention in Syria, and now Putin is actually conducting military intervention in Syria himself, and the US can do nothing about it. This is already enough to understand who won and who lost the game. The United States tried to intervene and failed. Russia, by the forces of the international coalition, will conduct an intervention, and after yesterday it became clear that the United States can no longer prevent this. The wheels will, of course, be inserted into the wheels, but Washington is no longer able to block the process.

If it seemed to someone that Obama spoke out harshly and something there "showed" Russia, then this impression is solely due to a lack of understanding of the situation. The confrontational version of the statements of the US leader should have been: “Russia is the enemy of democracy, the aggressor country, the rogue country. The international community cannot allow this country to intervene in the situation in Syria under the guise of fighting terrorism. Russia is a threat to the world Ebola virus, as I said. If Moscow and its allies try to conduct a military operation in Syria, we and our allies will be forced to take the most drastic measures of a political, economic and military nature. " That would be confrontational. This is exactly what Obama’s part of the elite, which sponsored and nursed the IG, and who relied on the IG as the main geopolitical weapon United States in the "new American century." From the point of view of a significant and very influential part of the American elite, an incredible thing happens: Putin is going to destroy the assets (expensive and necessary assets!) Of respected American elitarians, and the American president smiles into the camera, talks about how important it is for the "girls to go to school" and recognizes that the United States cannot solve world problems on its own, and also admits the possibility of constructive cooperation on Syria with Tehran and Moscow! Yes, he said that Assad should leave, but nevertheless understand that after the destruction of the IG, the fate of Assad will be decided not in Washington.

Well, imagine you bought an expensive sports car. Someone Vladimir approached her, with a bat and a clear intention to break her glasses, pierce tires and generally turn her into scrap metal. Called to the place of this act of geopolitical vandalism, Negro police officer Barry, instead of firing, begins to drink champagne with Vladimir and discuss "constructive cooperation." The outrage of American elitarians can be understood, and in this context, the angry tirades of experts from the neoconservative channel FOX News, who complain of "shocking return of Russia" on the political Olympus, quite understandable.

It is necessary to understand that the behavior of that part of the American elite, which is behind Obama and who refused to go into direct confrontation over Syria, is not caused by a bout of philanthropy, but is entirely rational calculation. If neoconservatives, and among Democrats (Clintons) and Republicans (Kohi, Kagans), hope to drive the rest of the world into 1993 with the help of “controlled chaos”, then the more moderate part of the elite (moderate Democrats and moderate Republicans) understand that an attempt to preserve world hegemony in the current conditions is likely to end with the loss of not only hegemony, but of everything. In fact, we are witnessing an attempt to return to 2010 the year when G20 reached breakthrough agreements in terms of dividing the spheres of influence and the reform of the global financial system. How successful this return will be depends on the results of the intra-elite struggle in the USA. This can be judged in a few months.

In the framework of the UN session and subsequent negotiations, Beijing’s unprecedentedly tough position was recorded:

"Measures to combat terrorism can be taken on the basis of the UN Charter and taking into account respect for state sovereignty and territorial integrity, and China supports the actions of Russia in this area," said the representative of the PRC Foreign Ministry, TASS reports.

Syria support is good, but the specific, targeted "kick" of American neoconservatives in C's speech.

His statement that the “absolute security of one country” is unattainable is a direct reference to the fundamental concept of the ideology of American neo-conservatives, who consider “absolute security” as the main value and main goal of foreign policy, the achievement of which justifies any crimes and any violations of international the rights. The principle of "absolute security" of the USA is the cornerstone principle of the "Project of the New American Century" - the super-influential American NPO under the direction of Robert Kagan, husband of Victoria Nuland. It was the doctrines of the “New American Century” that became the theoretical basis for intervention in Iraq and Libya, the color revolutions and the Arab spring. Comrade Sy actually stated that there would be no "new American century" anymore. The speech of the Chinese leader deserves a separate and thoughtful analysis, to which I hope to return in the future.

We are moving towards a period of radical changes in the global political and economic system. The germs of these changes were also indicated in New York.

Specifically: Putin harshly criticized the TTIP agreement, through which the US hoped to “devour” the European economy, similar to how the EU uses the “association” agreements in relation to weaker countries. The President of Russia outlined an application for blocking this fundamental agreement for the United States, which they have been trying to push through behind closed doors for several years despite the resistance of European business, which does not want to die. Putin is persistently hinting the United States of the need for an oholonut, while Europe is being offered the Chinese-Russian model of economic integration into the common trade and security space. This is a very serious application, with very far-reaching consequences. As your humble servant already wrote, "we need Berlin."

Another application with far-reaching consequences was voiced by Nursultan Nazarbayev, who indicated the need to create a supranational reserve currency, that is, he actually proposed to send the dollar into retirement. The President of Kazakhstan continues the political tradition of Asia: Nazarbayev voiced radical proposals, and then they unexpectedly find support in Beijing and Moscow. But this topic is for another material.

Conclusions from the session of the UN Assembly:

1. The unipolar world has died and is not subject to resurrection.

2. The team of grave-diggers of the unipolar world is formed and gets down to work.

3. IG has every chance to find peace near the unipolar world.

4. The battle for the EU is entering a new phase, and the Russian-Chinese team has every chance to win it.

5. Russia without prior arrangement is becoming one of the leaders of the Muslim world thanks to its role as coordinator of the anti-IG coalition.

Everyone involved: King Abdullah, Nazarbayev, Sy, and, of course, Vladimir Vladimirovich worked perfectly. It turned out almost everything that could happen.

Ctrl Enter
Noticed a mistake Highlight text and press. Ctrl + Enter
We are
A great interview with Sergey Lavrov: about Ukraine, Obama and IranWhat you didn't want to know about England
64 comments
Information
Dear reader, to leave comments on the publication, you must to register.