Nursultan Nazarbayev from the UN General Assembly held an attack on the dollar?

October 1 2015
62
The President of Kazakhstan, Nursultan Nazarbayev, was one of those state leaders who, from the rostrum of the jubilee session of the UN General Assembly, touched on the acute political issues of the modern world without departing from the economic component. If the loudest geopolitical initiative sounded from the UN GA podium, it is possible to consider the proposal of Russian President Vladimir Putin to create an effective antiterrorist international coalition, then the proposal of the Kazakhstan leader to create a supranational currency clearly pretends to be a no less loud economic initiative. 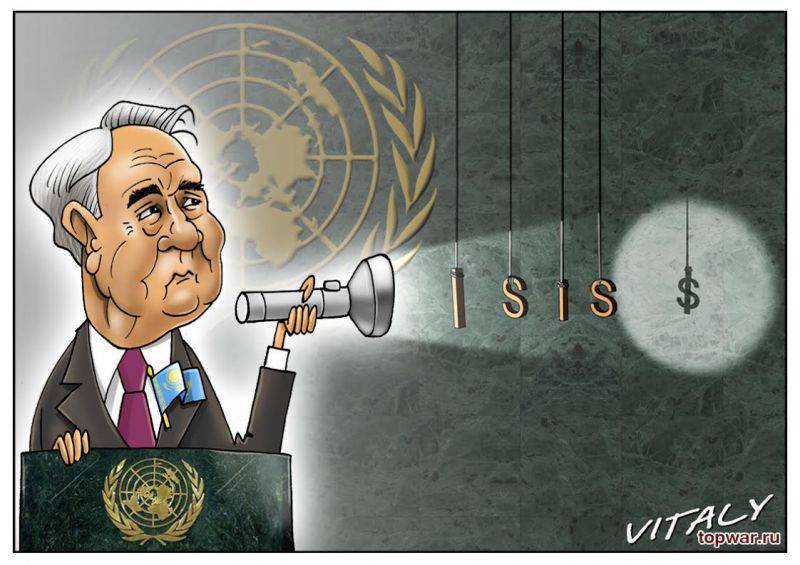 From the speech Nursultan Nazarbayev:
I am convinced that in the next thirty years, earthly civilization will find in itself the wisdom and the will to cut the “Gordian knot” of wars and conflicts. In the 21st century, the central task of mankind should be the implementation of a strategy that will forever save the world from the threat of wars as such and eliminate their causes. To this end, I propose that by the centenary of the United Nations develop a Global Strategic Initiative-2045 Plan. Its meaning is to give the world a new development trend on the basis of fair conditions for all nations to access global infrastructure, resources and markets, as well as universal responsibility for the development of humanity.

The idea of ​​the World Anti-Crisis Plan, the draft of which is actively discussed on the margins of the Astana Economic Forum, seems very relevant. Topical issues on the world agenda - terrorism, destruction of states, migration and other negative phenomena are the consequences of the economic crisis, poverty, illiteracy and unemployment.

The fight against the global crisis must begin with restoring the order of emission and circulation of world reserve currencies, which now does not meet the criteria of legality, democracy, competitiveness, efficiency and international control. In the twenty-first century, the world needs financial instruments of a new quality. Required unite countries - UN members to develop supranational world currencymeeting the goals and objectives of global sustainable development and prosperity.

Based on this statement, the President of Kazakhstan can be considered the only head among all those invited to the 70 session of the UN General State Leaders, who in fact declared that between the expansion of the dollar, as the “leading reserve” currency, and the main global problems (from the spread of terrorism until the increasing number of economic crises) there is a connection. According to Nazarbayev, if the world community abandons the idea of ​​economic parties to be created to eliminate the main competitors, then the crisis will come to naught. In addition, Nazarbayev makes it clear that a supranational currency can and should be based on real economic security (resources, including labor), and not be a swelling bubble that has reached critical volumes that threaten the entire global economy.

Of course, this proposal is worthy of attention, if only because it is really a proposal, and not a set of disjointed verbal constructions issued by the US President or, God forgive me, the President of Ukraine ... The proposal of the Kazakhstan leader, by definition, has the potential to give a new economic chance to the world, considering the state in which the world financial and economic system stands still today, which has finally turned into a servant of speculation, and not a base for effective development.

However, the proposal of Nursultan Nazarbayev for the modern world, unfortunately, is nothing more than utopia. Beautiful, bright, but utopia ... Why? Yes, if only because any economic proposal on the need to create a supranational currency a priori hits the interests of the “mighty handful” operating the printing press. After all, a supranational currency cannot be controlled by a single emission center, and indeed it is supranational in general, that no state will have hegemony in terms of its exploitation “in one person” - solely in its own interests. The supranational nature of a currency implies the creation of several economic poles capable of controlling its provision with real material values, not just rustling paper, “bill” paint and hundreds of foreign military bases scattered around the world ...

Are the “partners” willing to discuss the Nazarbayev initiative, who live by the fact that they find work for their printing press? To pretend that they are ready - yes! Really discuss - of course not! But after all, Wall Street cannot dream of it in its terrible dream to voluntarily take and give up the control of the world economy (and, as a result, politics). It was not for this that the Bretton Woods system was first created, which in time transformed into the Jamaican system. In general, “Bretton Wood” can be considered the main achievement of the “allies” in the Second World War ... Whether to say a joke - the war was rumbling in Europe, the Soviet soldiers sacrificed themselves for the liberation of the European continent from the Nazi contagion, and money bags were already beginning to divide the world pie to get the most benefit from such a division. Moreover, the Bretton Woods system in the United States began to be discussed a month after the opening of the second front (landing in Normandy) - quickly, so that by the time Hitler was defeated, he had to build new economic approaches and take financial domination.

They cleaned up ... And now who of those who tidied up like that will take it and after Nazarbayev’s words (domination) will give it back? After all, if you pass the economic reins of government to supranational financial institutions, then

a) how to finance international terrorism and all sorts of "color" revolution?
b) how to implement sanctions pressure to eliminate competitors?
c) how to live beyond their means, putting the burden of paying their own debts on foreign "partners", and, if you call things by their own names, then on "suckers"? ..
d) how do you talk about “exclusivity” and “infallibility”?

In this case, should the statement of Nursultan Nazarbayev be considered as trolling of American “friends”? And in general, it is interesting for whom, ultimately, Putin’s statements (actions) on Syria and Nazarbayev on supranational currency will become a test of strength ...

Ctrl Enter
Noticed oshЫbku Highlight text and press. Ctrl + Enter
We are
Donbass: Earth and Heavenly DefenseThe controversial Nazarbayev
62 comments
Information
Dear reader, to leave comments on the publication, you must to register.