October 1 2015
89
Washington no longer intends to demand the immediate resignation of Syrian President Bashar Assad. This was said by US Secretary of State John Kerry. Meanwhile, the eminent British expert acknowledged that the most “sensible" plan for resolving the conflict in Syria is not at all at the White House, but at Moscow. And in Paris, Marine Le Pen spoke: she believes that France should join Russia in solving the Syrian problem.


In an interview with the TV channel CNN the US secretary of state explained that the United States refused to demand the immediate resignation of the Syrian President. John Kerry acknowledged that Assad’s immediate resignation could destroy civilian institutions and lead to “collapse.” “We need to ensure an orderly transition, a managed transition,” the state secretary said, “so that there is no fear of revenge and no fear for life.”

With a sigh, Mr. Kerry admitted that the previous US approach to the change of power in Damascus was not viable.

In addition, he called "an opportunity" for Washington to involve Russia in the resolution of the Syrian conflict.

According to the TV presenter, Mr. Kerry reported on similar changes in Washington’s position on the UAR.

British journalist John Bradley, the author of several books on the problems of the Middle East, believes that Putin has the “most sensible” plan for Syria. This columnist spoke on the pages "The Spectator".

At the very beginning of the civil war in Syria, four years ago, John Bradley looked lonely in the British media against the background of screamers who were ready to “overthrow the secular dictator of the president.” The people of Syria did not really rebel against Bashar al-Assad, the analyst points out.

At that time, the journalist wrote that a short-term strategy aimed at removing Assad from power would lead to "destructive long-term consequences." In addition, Assad "will not fall": the people in Damascus will not go against him. And the so-called secular rebels are actually “evil Islamists in masks”.

The population of Syria with its ethno-confessional diversity could simply be destroyed as a result of the war. And the West could even provoke a full-scale war with Russia, the journalist recalls. Nobody in 2011 was listening to him, and he was “tired of trying” to convince people “of their own stupidity.”

And now more than four years have passed. Here they are, the suffering of the Syrian people: 250.000 dead, half of the population turned into "internally displaced persons", millions became refugees.

Russia came to the aid of Syria. In Latakia, military bases were built. Russians Tanks, fighters, military advisers, warships and even the most modern anti-aircraft missile systems ended up in Syria. Russian engineers built the runway “almost overnight,” and the fleet conducted demonstration exercises in the Syrian port of Tartus.

"Sassy" Russia took NATO by surprise, the analyst believes. But the question is: why do Russians guarantee that Assad remains in power? The short answer is: the Syrian strategy of the West is a pure mess, and Russia could do whatever it wants without fear of NATO - the alliance will simply “turn away”.

The Pentagon’s ideas about training the “rebel army from scratch” in Syria are ridiculed by the journalist, calling them “unthinking”. The US plans to combat the "Islamic state" seem to him stupid, while overthrowing the Assad regime.

Vladimir Putin today looks like the savior of Europe from the refugee crisis. He argues that only by keeping Assad in power can the flow of migrants be stopped.

It sounds strange, the British author continues, but Putin’s statements carry a lot more sense than anyone’s speeches. There is simply no one to object to Putin! The leading politicians of Washington and London, who muttered for whole years that “the evil dictator Asad should leave,” now suddenly agreed that Assad did not need to “leave” now.

A recent survey showed, further notes by a journalist, that 80% (!) Syrians believe that the “Islamic State” created the West. Yes, and many people throughout the Middle East think the same way ("and they are almost never wrong," the author believes).

Washington and its allies have nothing left to admit: Moscow was right.

As for the armaments supplied by Russia to Syria, the experts of AllSource Analysis told about them. This was announced by the site of the "shadow CIA" - the company "Stratfor".

American experts received new photos of Bassel al Assad air base from satellites. High-resolution photographs show that ground forces are deployed in defensive positions and dispersed throughout the airbase. 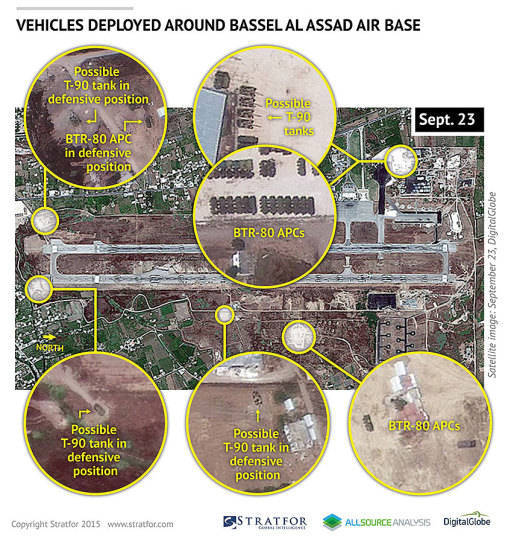 Russians can quickly take up the Su-30 multi-role fighters and use air defense systems, but the threat of fire strikes from hidden positions remains. Therefore, the Russians dispersed their facilities at the air base: they minimize the risks of artillery shelling.

Bloomberg spoke about her statement regarding French policy in Syria.

According to the leader of the "National Front", France should not independently strike at the targets of terrorists in Syria. It would be much better to unite with Russia and its great resources. This would help defeat the terrorists in a Middle Eastern country.

Marine Le Pen believes that the support of Bashar al-Assad is the best option, because if it were to fall, the winner would be the Islamic State.

Marin also said that international sanctions against Russia were not “helpful.” The “unipolar” world, led by the United States, tried to push Russia away from itself, but eventually brought it closer to China.

So, the situation in the international arena suddenly changed. The West recognized: Moscow was right, and Washington and its allies were wrong. British analyst John Bradley, an expert on the Middle East, four years ago actively speaking out against Western projects to overthrow Assad, now wrote a whole article in which he proved that “the most sensible” plan for Syria is with Putin. It sounds strange to the self-confident West, but today there is simply no one to object to Putin.

The world changed suddenly: now they agree with Putin.

Observed and commented on Oleg Chuvakin
- especially for topwar.ru
Ctrl Enter
Noticed oshЫbku Highlight text and press. Ctrl + Enter
We are
Neither the European Union, nor the euro, nor unemployment, nor poverty: the wonderful program of Marin Le PenSyria: Americans scare themselves, and Asma Asad buys chairs
Military Reviewin Yandex News
Military Reviewin Google News
89 comments
Information
Dear reader, to leave comments on the publication, you must sign in.