How to build an invincible ship? 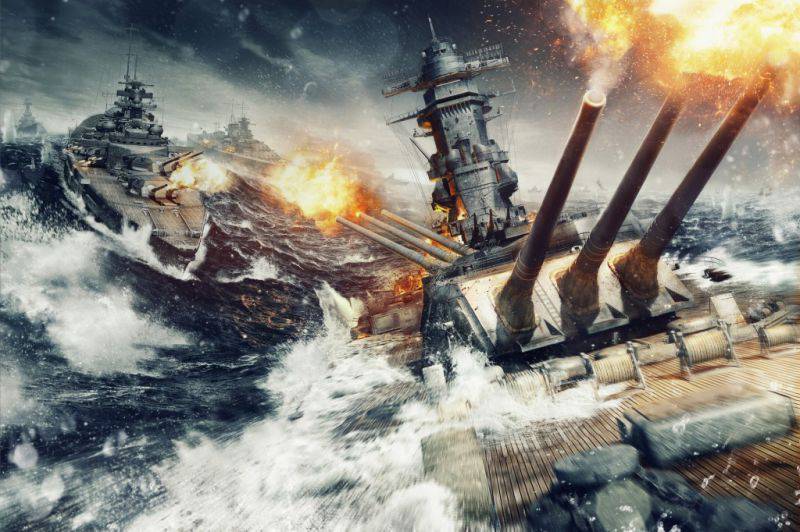 Discussions about the security of ships generate a powerful brainstorming session, which opens up technical details and little-known facts from stories sea ​​battles.

At the same time, the thesis about the need to return armor, despite the apparent paradox, is fraught with the great question: how efficient is the modern Navy?

The main reason, in my opinion, is that the ships have not really been fighting in recent years ... eleven (against equal / dangerous opponents). Here is the design idea and stopped. Infantry and Tanks After WWII, they were very actively used, and as a result we got ballistic helmets / bulletproof bulletproof vests / harnesses for infantry, DZ and KAZ for tanks built into the equipment + removal of the fighting compartment in the case of “Armata”. With ships, the development stopped at the level of "maybe they won’t hit us" due to electronic warfare, ineffective and / or small missile defense.
Comment from severny.

From myself I would add that in the half century of the bloody evolution, MBT turned into real armored monsters. Despite the presence of a huge arsenal of anti-tank weapons, penetrating any armor “on paper” and leaving no chance to all existing models of armored vehicles.

The discussion resulted in a cycle of popular (judging by reader reviews) articles on ship security. In response, critical articles are born, the authors of which are desperately looking for arguments against. Search, but do not find.

Lord, you need to look carefully!

Here are just a few comments on the article “Lost Armor” recently published in “VO”.

What ships carried serious booking during the years of WWII? It was at least "light cruisers", but "light" only in the classification of that era. In reality, these were ships with a full displacement of more than 12000 tons. That is comparable in size to the modern RKR Ave 1164. Smaller ships did not have armor, either booking was purely symbolic: with 25-50 plate thickness mm.

All this is an LKR pr. 26-bis (“Maxim Gorky”), equal in displacement to the unarmored destroyer “Orly Burk”. A very surprising result: when one bow group of GK towers weighed more than all 90 rocket mines with Tomahawks. The cruiser had three times the larger crew. And, that especially "delivers", its power plant exceeded on 30 000 l. with. turbines ultramodern "Burke".

If you do not like the “Maxim Gorky” with 70-mm armor belts, an even lighter “Atlanta” will come to the rescue, where the thickness of the armor plates reached 95 mm (standard cruiser displacement - 6700 tons, full - 8100).

21-th century, the Internet. Wasn’t there enough strength, at least for the sake of decency, to become familiar with the light cruisers of the Second World War?

Where the winds whistled at World War II cruisers, you can now sit comfortably in a chair and, pressing the computer buttons, admire the ocean sunset from a height. 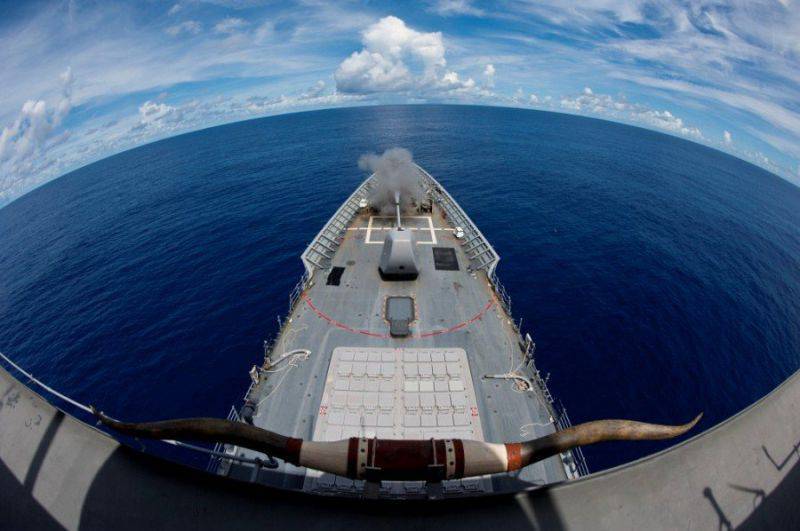 Simply put, there, at an unattainable height, are located the usual decks. With rooms, communications and consoles combat information center. And the superstructure itself acquired the look of a huge multi-storey “box” wide from side to side.

Most of it comes from the fact that designers have thousands of tons of load reserve and stability margin after removing armor. There is where to roam! At the same time, the “computers and electronics” themselves weigh very little against the background of other articles of the ship load. The main weight went to the power set, plating and deck flooring of this multi-storey “box”.

Why was the reserve spent so “ineptly”? This was discussed in detail in the previous article. With no recommendations and limitations, designers choose the easiest way by placing antennas on the walls of high superstructures - to simplify their installation and maintenance. Along the way, using the resulting volumes to accommodate combat posts and halls for fitness. Plus, additional ballast to compensate for the negative effect of windage from a solid superstructure.

"The specific density of the ship." To verify the above arguments, you can use the simplest, even primitive, but clear way to estimate the density of a ship’s layout. The underwater part of any vessel has a complex shape, and in order not to engage in the calculation of integrals, we simply take the volume bounded by the length, width and draft of the hull.

My opponent has introduced a new parameter - “Specific density of the ship”. It is calculated as the ratio of displacement to the volume of the underwater part of the hull (length * width * draft).

To understand the meaninglessness of this undertaking, I will give the simplest example.

There is a ship with a displacement of X tons and a draft of H meters. During the modernization, half of the boilers and turbines weighing x tons were removed from it. How to change the density of the cruiser? According to household logic, it should decrease (displacement is less by Y tons, the hull volumes remain unchanged).

What does my dear opponent do? In the cruiser the displacement decreased (X - x), together with it the draft decreased (H - h). That is, the “specific density” of the ship after the removal of the mechanisms of the power plant practically did not change!

There are exceptions confirming the rule. There are armored ships, the conditional density of which is close to that of rocket ships. True, the very booking of such ships can be considered tending to zero. These are the cruisers of the 26-bis project.

Somewhere we have already met them ... Ah, this is “Maxim Gorky”, whose armor weight exceeded the weight weapons.

The disappearance of 25 wagons with scrap metal is such a trick even Copperfield cannot. 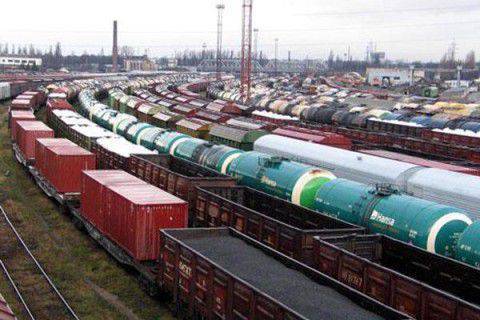 Our BOD 1134B is one-on-one similar in displacement to the Japanese light cruisers Agano ... The ships are the same, and the armor to the BN 1134B is not! Where did talentless designers get armor-free tons on our BOD? No need to rush to conclusions, you must first enjoy the information on booking "Agano". It had the thickness of the side armor of the whole 50 mm, the deck in 20 and the tower 25 mm. In principle, armored personnel carriers of the ground forces are booking almost the same today. In short, the displacement and size of unarmored rocket ships and their armored artillery ancestors begin to converge when the booking of the latter tends to zero.

Well, if you really argue, then argue honestly.

“Agano” had an armor belt 60 mm thick (length 65 m, height 3,4 m) to which two additional 55 mm sections for cellar protection (length 27 m in the bow and 6 m in the stern) adjoined. Citadel Deck - 20 mm Anti-Rejection Reservation. Elevators of ammunition covered plates with thickness up to 50 mm.

The total weight of the “Agano” armor tends to zero and was 656 tons (8% of the standard cruiser displacement). Such a reserve of load would have been received by designers, having built a ship similar in displacement, completely abandoning armor. It is also necessary to take into account that between “Agano” and 1134B there is a whole technological abyss - 35 years. With the same power of the power plant, the 1134B designers again benefit from gas turbines, winning an additional hundreds of tons.

Where did talentless designers get armor-free tons on our BOD? Spent on weapons! Four air defense missile systems, anti-submarine missiles, light artillery, a helicopter ... BOD Ave 1134B became the most armed ship in the history of the Russian Navy. By the number of missiles on its board, the “Bukar” was twice as big as the modern Aegis destroyer! Despite the outdated technology 70-x, cumbersome and inefficient beam PU, fire control on the monstrous microelectronic base of that era.

How did the specialists of the Northern PKB manage to build a masterpiece?
The "Bukar" did not have high superstructures.

1134B, like the Japanese “Agano”, are not the best examples for discussing the “mysterious” loss of displacement.

The Japanese was a specific light cruiser, one of the worst representatives in its class.

The Soviet BOD did not have the layout characteristic of ships of the twenty-first century. Despite the placement of weapons on the upper deck (which adversely affected stability compared to modern UVP), the “Bukar” did not have a solid box-like superstructure from side to side, with a height of ten-story house. And due to this, had a huge advantage!

In this sense, the project 1134B - an example of how many useful things you can install on board, with the correct layout of the ship.

And the answer lies in the armor penetration of modern warheads of anti-ship missiles. The presence of an armor belt with a thickness of 150-200 mm does not fundamentally solve the task of protecting the ship. The presence of 200-300 mm thick, but negligibly small, armored belt with an X-ray thickness, does not play any role. If even a rocket hits him, she punches him without any problems.

No role and no problems. Just like the disappeared 1500 tons from the cruiser “Maxim Gorky”.

150 mm of armor steel is a guaranteed protection against any RCC in practice (Harpoon, Exochet, NSM, Yingji, X-35).

The grounds? Speed ​​"Harpoon" weight and fur. the strength of the warhead (since all the rest of the missile’s “missile” will turn into dust) in comparison with an armor-piercing 203-mm projectile. Rate odds filling. Do not forget to take into account the unfortunate location of the warhead in the middle of the rocket body. And draw conclusions!

Opponents of the construction of protected ships usually emanate from false ideas, guided by the silhouettes and layout of modern Zamvolts and Aegis destroyers. Gentlemen, the creators of these vessels did not plan to increase their security, they built them in such a way that they couldn’t put armor there. 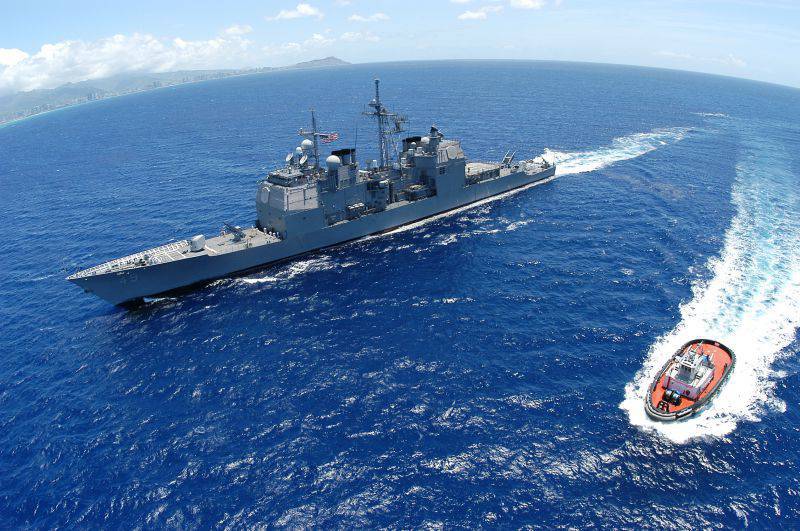 The highly secure ship of our time will not be like any modern ship or TKR of past eras. Shorter, stable and capacious building, a citadel-armored capsule with integration of armor into a power set, rational installation angles (strong sides of the Zamvolta side, maximum squat superstructure in the shape of a tetrahedron), horizontal protection not inferior in vertical power, additional measures to cover ammunition storage sites, a splinter wall along all compartments and aisles on the opposite side of the board, numerous internal bulkheads ...

The mass of such armor will be within 2-2,5 thousand tons (focusing on the TKR types “Baltimore” and “Des Moines”). While modern ships can afford more at the expense of modern technology.

At full displacement of the cruiser 15 thousand tons.

It is known that the cumulative high-explosive warhead BCR PKR "Basalt", which is in service with the cruisers of the project 1164, breaks through the 400 mm of armored steel.

It would be interesting to get acquainted with the original source and the results of practical shooting “Basalt” at protected targets.

The Super Cruisers like Peter the Great may not be stoked by the Harpoons or the X-35, but by the Granit and the Basalt.

Arms always show samples of super-cannons and anti-tank guided missiles, which break through any tank. But whenever war begins, tanks meet land mines and downpour from conventional anti-tank weapons (from Pak 38 discs to simple and massive RPGs).

I think the analogy is clear.

Even for light RCCs that do not have high kinetic energy (low flight speed and mass of the warhead), a compact cumulative warhead can be built, capable of coping with at least an 100-mm barrier.

Strike the board, and then what? Ahead is a system of isolated compartments and splinter bulkheads. 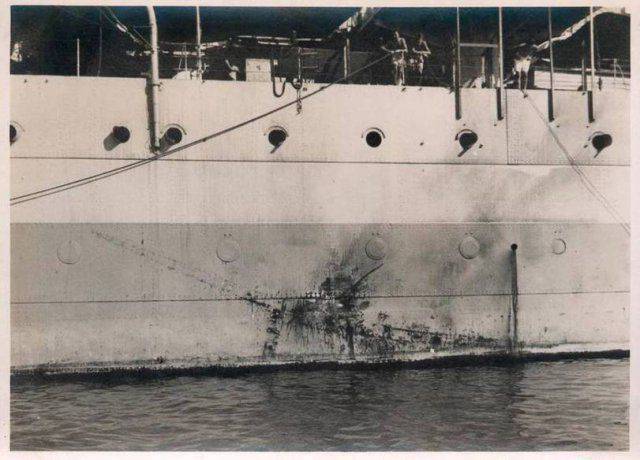 Imprint of kamikaze aboard the cruiser Sussex

We are in Yandex Zen
Coastal Warships: Modern Approach
Under construction and adopted ships for the Russian Navy. Part of 2
169 comments
Information
Dear reader, to leave comments on the publication, you must to register.