New Russia: to be or not to be? Where so many problems have the GRU and the MGB? 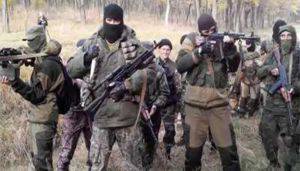 Indeed, there are enough problems. The incident in Torez it showed. And even if we are not supporters of the official version of the terrorist act, it is, oddly enough, very clearly shows that there really are problems.


Versions of the work of the so-called DRG of the Armed Forces of Ukraine or of any other structures "on the other side", or the presence of obvious traitors, will be left for discussion to those who should be engaged in them. The only question is how competent these bodies are.

If you believe the information coming from LDNR, then, alas, the picture is more than sad. What happens in the MGB DNI, we have already described. I must say that the situation in the LC is no better. Yes, we do not observe scandals associated with this structure. But recently there has been a real outflow of people capable of carrying out actions inherent in the security authority.

As for the GRU DPR, the level of doubt in the competence of this structure is also growing every day. And growing so much that they are already starting to talk about it. And, as in the case of the MGB LNR, people also began to leave the GRU. And, as usual, those who have everything in order with such concepts as duty and honor. To our greatest regret.

In the near future, we will present an interview with one of the former employees of the GRU of the DPR.

In the meantime, it makes sense to speculate a little on the topic of sudden impotence that struck the most prepared unit of the DPR. There are people who talk about it, and it’s good that they are still there. Because since they paint an ugly picture of what is happening, it means that it makes sense to think about the authorities. Until it was too late.

Why is there no material about the GRU of the DPR lately that says that this structure is doing what it should? Secrecy? Well, agree. But why then scandalous storiesIn which these or other employees appear? Provocations? It may well be.

However, the story of the undermining of the red "Range Rover" made a splash. And then they began to float to the surface facts and facts, which bitterly narrate about what the division that had been created "in those" times turned into a gloomy one.

The GRU began to be openly called OPG. The letters are different, the essence too. It is surprising how quickly such a specific and cohesive unit turned into an ordinary gang with a good “roof”. But you can ruin anything. Even the country, as it was with the USSR. And it’s a separate subdivision - and even more so.

You can talk for a long time on how guilty and whether Antyufeev is guilty of appearing in the higher structures of the DPR Filippova and Fadeev. The facts show that no matter how good the press secretary of Zakharchenko Elena Filippova was in her position, but what Fadeev and Filippova Jr. arranged for the GRU, you can’t call anything else like lawlessness. 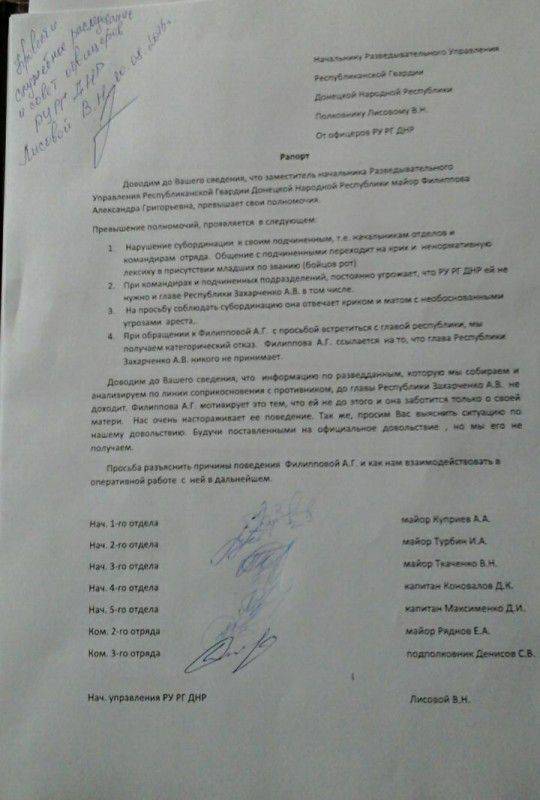 How else to explain this report? Whatever you say, but this is a document. Signed by virtually all the commanders of the Intelligence Directorate of the DPR GRU. In addition to the commander of the 1 squad, which was the "guard" of Fadeev - "Old".

By the way, about Fadeev-Stary, the current head of the GRU. Guided by the words of Pushilin, that the main thing is loyalty to the idea, and the rest can be neglected, Fadeev "on the spot". Apparently, his commitment to the Pushilinsky idea is so great that he was appointed to such a position, despite escaping from the Slavyanoserbskaya colony, where he was serving a 15-year sentence.

Say what's wrong with that? The man was convicted in "that" Ukraine, and in Novorossia can be quite a normal member of society. Would agree if Fadeev sat for theft of state property or something like that. But the Donetsk court in 2007 year condemned him ... for murder with aggravating circumstances as part of a gang of juvenile criminals created by him.

And what, I'm sorry, can we expect from such a commander? Nobody really waits.

Created on the basis of the GRU 1 squad, the “Old” gang extorted money from local merchants, and those who refused to pay were sent to the basement and tortured. There is evidence to death. Conscious militia members were also repressed. Those who tried to resist the gang and testified against them, at best, were forced to leave "of their own will." There were also missing. There were more severe cases. The militiamen with the callsigns “Tihan” and “Dan” were indicatively and personally killed by Fadeyev.

And so, Fadeev had a helper, who also became a "roof." Yes, not simple, but gold. Alexandra Filippova. First, Sasha began to deal with issues of finance and supply. And there was no finance, no supply. Then, when the situation reached a critical point, she was transferred to liaison officers. And in May, 2015, its high point came.

Either Elena Filippova, taking advantage of her proximity to Zakharchenko, or Fadeev, they say, became Sasha’s lover (not proven, of course), or both at once, but arranged for Filippova Jr. to be appointed the first deputy head of the GRU DPR. !

Well, in the republic, where an untrained private becomes a general in two months, this probably will not surprise anyone. But for some reason, no one has any special claims on this score to the “Tsar” - Kononov.

But when a girl of twenty, not having any military experience and having no even the most primitive ideas about the art of war, began to command the special forces ... Sorry, this does not fit into any framework.

The disintegration and collapse of the GRU took on a catastrophic scale.

The high point was July 14, when a mine was laid in the red "Rage". By luck, Filippova Sr. remained alive.

What followed is already described in the blogosphere and the Internet. Repeating this dirt just do not want. The artistic performances of Filippova Junior were watched by the whole Donetsk, all, as they say, were in the know. And only in the proceedings that followed July 14, the details of this "carnival" began to reach the highest levels.

It is difficult to say how the GRU fighters would end up with non-compliance with the order of Filippova Jr. about disarming those whom she suspected of sabotage. There were many fighters who refused to “apply extreme measures of influence”. Rescued, by the way, the fact that the demon-possessed girl was "hampered" by representatives of a third party. It is clear what.

Glory to the representatives of this "third" side, that they did not allow bloodshed. And then insisted on the proceedings. Zakharchenko figured out. And those too ideological fighters who refused to carry out orders of the abnormal Sasha, could just leave their units. Again, on their own.

A Philippi Junior was reprimanded. And she continues to “work” for the good (not sure that we know whose) and further. In the same position and rank.

Did ZHarchenko know everything that was happening in the GRU? Knew Perhaps - in the edited version of Filippov and Fadeyev, especially for him. But there were people who could turn to him directly. And they addressed. And to the last they believed that Zakharchenko would figure it out.

Basically, they all no longer serve in the GRU.

Apparently, Mr. Zakharchenko is happy with everything. And Filippov, it is not clear where they came from in Donetsk, and Fadeev, a criminal, a murderer. In general, with Fadeev everything is more or less clear. Not for nothing is the legendary holder of the Donetsk obshchak the thief in law, Igor "Wolverine" - his uncle Zakharchenko. Obviously not in vain.

Everything continues to go to the target. Whole question to which one?

22 September 2015 near her home was captured by people in camouflage uniforms and taken away in an unknown direction by Valentina Kornienko. Deputy Head of the DobRussia Charitable Foundation. The problem is that her older sister, Catherine, the founder of this famous foundation, who from the first days helped the militia and the residents of the DPR, managed to spoil relations with "Major Sasha" very badly. Because of humanitarian aid, it was not clear where.

In general, the scandals between the senders of humanitarian aid and recipients - a common thing. But Filippova Jr. put everything so brazenly that in the end it caused another scandal. And here's the result: Kornienko, Jr., was abducted in a style already familiar to us. White day, unidentified people in camouflage and balaclava.

It is clear that the GRU is not in the business here. This is the work of the DRG of the Armed Forces of Ukraine, which flooded precisely in order to weaken the flow (and without that not similar to the river) of aid in the DPR. Probably, these are those who couldn’t grab Purgin, so they, being at fault, were sent for a lower rank person. Coped.

It is clear that this video message to Zakharchenko is unlikely to lead to anything. Not those times. And what is the business of the president of the republic before some humanitarian workers there, when such things are in the kitchen?


The summary is simple and unpretentious. It is good that this notorious DRG of the Ukrainian Armed Forces has something to do besides working on the territory of the DPR. Because the DNI to oppose them really nothing. The GRU and the Ministry of State Security, who seem to be supposed to deal with precisely this counteraction, have something to do besides such trifles.

Therefore, we are sure that the loud statements of Zakharchenko on the tragedy in Torez will remain only statements. All that those who are now engaged in security in the republic are capable of is to promptly remove all photos and videos from the scene. No more.

So our opinion is that both Valya Kornienko and the hypothetical saboteur who laid it is not clear that in the “motolab” they will remain where they are now. In the unknown.

However, we make a reservation, there are still people in the Ministry of State Security of the DPR who understand that a lie is not always righteous. And these people put at our disposal a certain amount of photos and video documents from the scene of the tragedy in Torez. And, as in the case of Bednov and Mozgov, we will soon gather our experts and voice our point of view on what happened in Torez.

Just do it not on the radio, but here. Photos do not insert into the radio, but there is a sense. If our point of view will interest the relevant persons in the DPR - fine. We now have a person who can easily transfer this material to them. Naturally, in addition to the full testimony of two eyewitnesses, with whom we were also able to communicate.

Although it is unlikely that these calculations will interest someone there. But in any case, it will be interesting. With Brain we laid out in due time on 90% right ...

Ctrl Enter
Noticed oshЫbku Highlight text and press. Ctrl + Enter
We are
New Russia: to be or not to be? MGB. "Boys, you will be whose?"Situational analysis of the death of the MH17 flight (Malaysian Boeing 777), made on the basis of engineering analysis from 15.08.2014
45 comments
Information
Dear reader, to leave comments on the publication, you must to register.