30 September 2015
22
Hybrid warfare is a strange thing. Its fronts run through the entire continent, starting from the Syrian and Iraqi sands, through the Afghan mountains and Ukrainian fields, right into the offices of high Russian officials. At first glance, an absolutely insane concept takes a slender and quite logical form when you begin to understand it. There are many similarities between Middle Eastern extremists, Ukrainian Nazis and Russian corrupt officials. First of all - the common owner and participation in his unified strategy. The ultimate goal of the United States strategy is not Syria or even the whole Middle East. And certainly not Ukraine. The goal is the resources of the whole world, including the Russian Federation. Owning it, the United States can delay its financial collapse for another few decades. 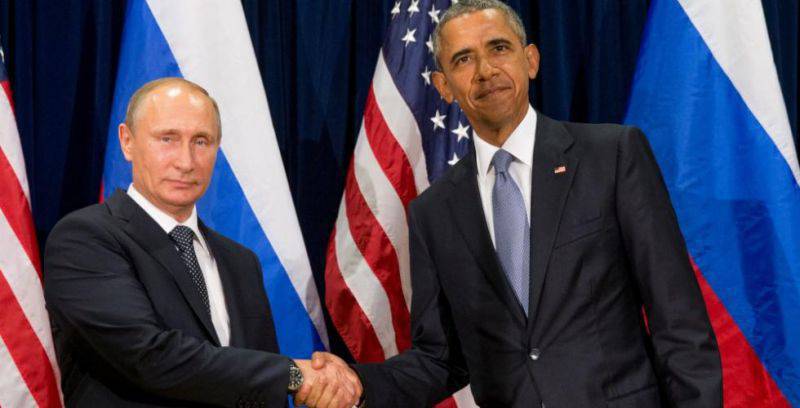 Russia is going to defend the regime of Syrian President Bashar Assad, but will not participate in any military operations in Syria or in other states. So said Vladimir Putin in an interview with CBS and PBS. He confirmed his words after meeting with the American leader.

Save Syria as a unified state is no longer possible. This is a fact that is difficult to deny. In order to win the Syrian civil war, we need an expeditionary force of at least 100 thousand people. Judging by the latest statements, Putin understands this and is not in a hurry to climb into such an obvious trap.

The current Russian contingent is now just enough to, at best, help to keep Assad what he owns now. However, this may not be enough to hold the front line, and then, perhaps, the task of saving the Alawite territory on the coast and preventing Islamists to the sea will arise.

Here a new bifurcation point appears. On the one hand, there remains the threat of the complete defeat of the Assad troops, which will substantially respond within both Russia and Iran. On the other hand, if by joint efforts of the remnants of government forces, Russia, Iran and Hezbollah, this can be done, then Asad can become the head of a new, purely Alawite state. Of course, this is a defeat, but not a complete rout. It is possible to technically defend the coast, for it is clear without special military knowledge that it is much easier to defend a direct front of 200 km with the same forces than winding 500-600 km. And if you keep a secular state at least on the coast, then the Islamists will face a dilemma. Either it is rapidly degrading in the current shaky boundaries, and eventually collapsing due to internal contradictions and under the blows of Kurds and militants of Dzhebhat an-Nusra, or changing the direction of expansion. Turning the IG to the south is a nightmare for Saudis who are already waging one war of attrition in Yemen. The appearance of the Caliphate in the north of the country will be the beginning of the end for the Al Saud empire, under the yoke of which are the states and peoples conquered by Wahhabis in the past.

However, Putin himself now finds himself in that situation, which Tsar Nicholas I often described during the Crimean War with the words that if Austria entered the war (which by that time had managed to squeeze out Russian troops from the Danube principalities), then it would have to give many Western gubernias that there is simply no one to defend. So, before the Russian Federation at any time, there may be a need for military intervention in Central Asia. The capture by the Taliban of Kunduz could mark the beginning of the expansion of the Islamists to Central Asia. The process is extremely slow, but inexorable. And even if the Afghan army liberates the city, this will not significantly change anything, for the trend has already begun. In essence, Russia is creating a third front, in addition to the Syrian and Ukrainian-Moldovan ones. And this is not to mention the Caucasus, where just the other day Karabakh let itself be known again. If in Central Asia it is theoretically possible to count on the assistance of Iran and China, who are also not interested in destabilizing the region, then in other parts of Russia they will have to act on their own. And not just to act, but with the active resistance of "friends and partners", both external and within the country.

The goals of Americans in the Middle East and in the post-Soviet space are so obvious that they are not even hidden - a global redrawing of the entire political space. The destruction of not only undesirable regimes, but also national borders between states. The latter were largely formed before the era of American domination and did not suit Washington for various reasons. In place of the collapsed states, new dividing lines will be drawn, which are more suited to overseas process conductors. The meaning of such actions for the New World is clear: in addition to the banal goal of any war - robbery, America does not allow potential competitors to develop. If the borders of Middle Eastern countries would remain stable further, then in such conditions, and with the help of demographic and hydrocarbon resources, some Arab countries could eventually grow to the level of regional powers. Such a White House categorically does not suit.

Through the Middle East, the current US administration expects to deliver a significant blow to Putin personally, as a holding element of the political stability of the Russian Federation. The defeat of Assad, especially with the massive loss of Russian military personnel, will significantly shake Putin’s authority. But the effect will be much stronger if, almost simultaneously with the fiasco in the Middle East, Poroshenko will arrange a winning blitzkrieg in the Donbas or in Transnistria. Once again, we recall that the Ukrainian regime and the Islamists have a common owner, who can easily coordinate their actions. It makes no sense to tell what effect such defeats will produce in Russian society, especially if they happen in close time gaps.

Here comes the fifth column, but not a caricature, in the form of characters with Ukrainian flags and white ribbons, but a real one. This grouping consists of a broad class - high-ranking officials (at the level of the governor, or even higher) and oligarchs. Considering how quickly the proceeds from the rapidly collapsing economy are, Putin sent an unequivocal message to the elites - you can no longer steal. The corruption burden on the country and in prosperous times was beyond, and during crisis periods it becomes completely unacceptable.

The nomenclature, of course, does not suit such an alignment, and it continued to absorb resources at tripled rates. It was then in the Kremlin that it was decided to turn on the power mechanisms against those who were previously considered untouchable. The arrest of Sakhalin and Komi governors is just the beginning. The situation can be compared with the common school historywhen the teacher first allowed his pupils everything, and then, having realized it, he began to restore order. What will be the reaction of children to this? Quite right: rage and open disobedience. And here are not children, but quite adult, experienced gangsters, who are trying to be torn off from the gigantic financial flows on which they have been sitting for decades. And it is not difficult to predict their reaction, for in the world of bandits such actions are a direct declaration of war. Obviously, this was something that was foreseen in Washington, when they sent John Tefft to travel around the regions of the Russian Federation and communicate with local elites.

High-ranking corrupt officials understand that in the new reality, Putin can imprison or destroy any of them, so the personal security issue has come up to them. Fully such security can only be obtained through political means. Either by creating a closed specific princedom (i.e., through separatism), or through the displacement of Putin and the enthronement of such a leader who will allow them to continue the looting with impunity.

As you can see, the Americans have thought a lot, and their steps are known almost to the smallest detail. They are confident of success and are not shy about announcing new actions. But what is Putin going to answer? This is the greatest question of our time.