Pride in the Russian army

October 2 2015
5
This feeling is experienced by compatriots, having read the reviews of foreigners about our soldiers.

In the “Historical Gazette” for 1912 year, where these most interesting materials were found, causing a sense of pride in the Russian army, there was almost no information about the author of the work that was requested by Napoleon. The materials of the State Historical Museum "The Epoch of 1812 of the Year", devoted to the bicentenary of the Patriotic War, contain some information about General R. T. Wilson.

The overwhelming majority of memoirists, describing Wilson’s personality and activities, note his courage, military and literary talents, as well as the mainly positive influence on the settlement of conflicts between Russian military leaders and sincere admiration for the Russian struggle against Napoleon. In 1810, Wilson published notes on the 1806 – 1807 campaigns “Brief Notes on the Character and Composition of the Russian Army”. Napoleon wanted to get acquainted with this book. Below are the testimonies of the English general about the Russian army of the time.

“... The infantry is generally made up of people of athletic (very strong) build from 18 to 40 years, gifted with great power, but not tall. They are accustomed to all the changes in the weather and the needs, to the very thin and scanty food, to hikes day and night, to difficult work and burdens. They are fierce, but submissive; persistently brave, but easily excited to glorious exploits; devoted to his sovereign, chiefs and fatherland; pious, but not darkened by superstition; patient and compliant.

The shortcomings attributed to the Russian army are only the consequences of an imperfect military system, and not the personal inability of the soldiers. Their strength requires only direction, and courage requires experience. Nature endowed them with the best essential capabilities for military action. For this device, the troops do not need a creative genius, but need order in management and art in the authorities.

Bayonet is true weapon Russians. Some Englishmen can argue with them about the exclusive right to these weapons, but since the Russian soldier is chosen from a large number of people with great attention to his bodily qualities, then their regiments must have a much greater superiority. The courage of the Russians in the field is unparalleled. A Russian who has been accustomed from the very young years to counting Russians as a people — the first in the world, honors himself as a member, must be necessary in the composition of an invincible state. Suvorov knew this way of thinking and, using this, he achieved in the smallest ways brilliant successes; and although he valued human blood less than his predecessors, he was loved by soldiers like his father, and people's pride, as well as personal surprise to him, exalted him so much that Suvorov was still recognized as a deity present in their battles. The well-known composition of his army, the insignificant number of its soldiers, the internal obstacles that he has always encountered, in fact elevate the dignity of his exploits, give him all the right to the name of the first military leader who ever existed in the world. 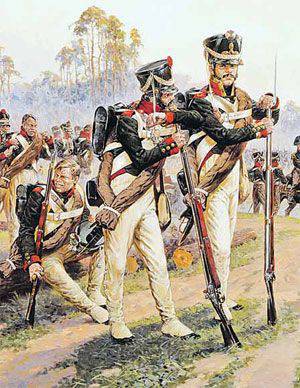 The Russian soldier generally observes obedience in general and is attached to his officer, and the officer treats him very affectionately and not in the same way as with a machine, but as with a rational being whose affection he should acquire. Russian punishments are not as frequent and not as cruel as in the armies of other nations. The Russians had a chance to be surprised at the appeal and frequent use of punishments in the troops of their allies.

Russian officers are very affectionate towards the soldiers and with a cheerful spirit they share every need with them. They enjoy the pleasures of life if they meet them, but do not grumble if they are deprived. With surprise, foreigners should see their indifference to peace, bliss and even to the necessary needs in a dormitory, with which the boyars, accustomed to luxury in capitals, owners of huge houses and incomes equal to those of the king, withstand the difficulties of the hardest hikes. Their courage is worthy of a Russian warrior. The love for the fatherland and the irresistible desire for fame always burn in their souls, incessantly encouraging them to the exploits and merit of differences. The most sincere friendship, the most kind-hearted hospitality connects officers and makes up some kind of fraternity. Their selflessness is so great that the property of each is revered by the property of all its friends and even of every foreigner. Both rich feast and daily bread are shared equally between the invited and uninvited guests. The customs of Moscow and St. Petersburg are preserved in the camp, and the spirit of generous hospitality does not change either by the paucity of means or the burden of circumstances.

It is peculiar to the Russian officer, as well as the soldier, to appreciate his land. He is annoyed if any comment is made to the account of this or an incident is described which, in his opinion, diminishes the dignity of his fatherland.

Between the current Russian officers there is no shortage of capable people. There are also many excellent brigade and divisional generals, but the continuous appearance of the Suvorovs cannot be expected.

The military merits of the Cossacks are as distinctive as those of the entire Russian people, but the hereditary skill for war, and perhaps innate talent for it, multiplies and refines their concepts and abilities. In the course of the stars, in the direction of the winds, through consideration of the most clever observations, the Cossack passes through unfamiliar lands and impassable forests, reaches his destination, pursuing the enemy with the same precision and perseverance as a hound dog pursues a hare. Nothing can escape his activity, hide from his insight and deceive his vigilance. The inexorable wrath of the authorities and the eternal disgrace brings on itself a Cossack, who by his carelessness contributed to the success of the enemy. Armed with a spear, a pistol and a saber, the Cossack never fears a rival in single combat, and in the last war the Cossacks attacked every cavalry, even in the open field, was irresistible. Fear preceded their onslaught (attack). It is in vain that the art of war tries to oppose any obstacle to the spears directed to them.

Although the Cossacks in some cases, with their onslaught, smashed the regular cavalry, they should not, however, think that they were appointed to act in general in the ranks. Cossacks are fighting in all directions. And if, when they are about to strike at the enemy with combined forces, then this attack is done without a systemic order, but only with a crowd. But even in this case, it is not produced except under the orders of those of their officers, who always know their spirit and strength better, or it should be (as this often happens) the action of voluntary motivation, which ignites the whole corps and found cry, much more terrible and terrible than the cry of the wild warriors of Canada. Knowing how to skillfully own a horse, which is cleverly controlled by one bridle, they can dodge in all directions in the most impassable and difficult locations ...

... Cossacks and their horses can be called iron in terms of their strength: no work, no weather, no setbacks stop their activities, do not weaken their service. Between simple Cossacks, people of knightly spirit and filled with a sense of honor are often found. Many of them could even be a decoration of the knightly age and would be worthy of memory in the progeny of their famous feats of loyalty and courage. "

Russian soldiers from the French during the First World War received equally good reviews. Following his duty and duties to the Allies on the Entente, the Russian Expeditionary Force was sent to France. He numbered 45 thousands of warriors (of which 750 officers). Organizationally, the REC was consolidated into four brigades (two fought in France, two in the Greek Thessaloniki). Our allies spoke highly of the combat training of the Russian brigades.

In particular, Marshal of France Foch wrote in his memoirs: “In the first years of the war, the development of our successes was achieved thanks to the assistance of the Russian army and its devotion to our common cause. If the French were not erased from the map of Europe, then we owe it above all to Russia ...

... The Russian soldier is disciplined, selfless, has an inquisitive spirit and a tenacious mind: together they make a fascinating impression. Russian connection - shock combat unit. With good preparation, it will be invincible.

... The brigades could not change the course of the war on the Western front in favor of the union, but the role of the Russian brigades was different - to raise the spirit of the population, and they fulfilled this task. ”

This living symbol of the union with Russia should have been shown to the Parisians. Therefore, the first battalion with the regimental orchestra was sent to Paris. After the July 14 parade, 1916, he walked through the streets of Paris among the crowd, who met him with great enthusiasm.

Such are the impressions of the English general and Marshal of France about our fighters and commanders.