We can say that the best tank is the one that defeated the enemy. Or depending on your point of view, the tank that does not shoot at you. But actually the best choice tank - It is always a real nightmare for technicians and historians. In this matter there are a lot of variables and conventions, as well as experts and experts storiesthat will argue you to death. But let's look at the analysis data from the book of military analyst and authoritative specialist in tank battles of the Second World War, Stephen Zalogi (Steven Zaloga), whom he called “Champions in armor. The best tanks of World War II "(Armored Champions: The Top Tanks of World War II).

So which tank was the best in World War II? Forgive tank fans, but there is no such car. Pledge wisely bypasses this scientific minefield, without naming "the best tank of the greatest generation." “The tank, protected by 45-mm armor, was invulnerable in 1941, but by the year of 1945 it was doomed to a quick defeat,” writes the author. “The tank with the 76 millimeter cannon in 1941 was the world champion, but by 1945, such a weapon was already a useless cracker in a tank duel.” 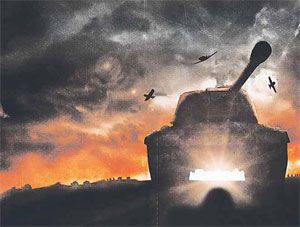 In his book, Pledge does not highlight the best tank of the Second World War, but names the best tank for each war year. What is more important is how the author solves the difficult question of why the seemingly best tanks so often belong to the losing side. For example, weaker German tanks in the 1941 year caused the most powerful damage to the tank fleet of the USSR, and the Israeli “Super Shermans”, which became a modernized version of the remnants of World War II, destroyed modern Russian tanks in 1973.

Pledge solves this difficult problem by choosing two leaders for each year. He calls the first one “The Choice of the Tanker”, and this rank is given to the car that occupied the leading place in terms of traditional indicators - firepower, armor protection and maneuverability. And he calls the second leader “The choice of commander”, based on the general indicators of the suitability and usefulness of the tank and taking into account such factors as reliability and the number of manufactured vehicles. Thus, although the legendary German Tigr has more firepower and has more robust armor than self-propelled artillery mounts of the StuG III assault guns (this is a tank without a turret, from which a cannon sticks out of the hull), guns StuG III, or three tanks "Tiger", writes Pledge, and given the reliability factor, the Wehrmacht could get either seven StuG III or one "Tiger" in working condition. "

Such an approach in the analysis gives quite unexpected results. The French tanks cannot be taken seriously, but in 1940, Somua S-35 won the nomination “Choice of the Tanker” due to the balanced combination of high for its time indicators of firepower, armor protection and mobility. But the problem with the S-35 and many other Allied tanks at the beginning of the war was the turret, where two people were stationed, and the commander fired from a cannon. It turned out that the tank commander could not follow the battlefield, did not control the situation and was unable to respond to rapid changes in the combat situation.

In contrast, the German Pz IV with its low-speed gun on paper was considered weak. But in the tower he housed three people: the gunner, loader and commander. The commander's hands were free and he could truly command the crew. Thus, Pz IV wins in the nomination "The choice of commander", because it surpasses other machines as a means of achieving victory in battle.

Some preferences Pledges do not cause much surprise. The only tank in his book that won prizes for 1941 for the year in both categories - “The choice of commander” and “The choice of tankman” - is the T-34. Despite the turret for two people, the T-34 with its excellent firepower, armor and maneuverability shook the Germans and surpassed the previously invincible German tanks. And the German infantry watched in horror as its anti-tank shells bounce off the powerful T-34 armor. Some may protest, saying that the Germans in 1941 still suffered huge losses to the Soviet tank forces, but this was largely the result of poor crew training, shortcomings in maintenance and repair, and gaps in Soviet tactics. T-34 became the champion not because he won the battles in 1941, but because he did not let the Soviets lose much more battles than they lost.

In 1943, the contrast between technical performance and combat effectiveness becomes most striking. It is not surprising that the "Tiger I" became the "Choice of the Tanker", because he has thick armor and a powerful gun and he inspired fear in the allied forces. But it was an expensive tank, there were few such machines (1347 “Tigers I” were built in total, while T-34 - 84 thousands), and it was difficult to maintain and repair them. The bloodless and desperate German infantry divisions on the Eastern Front needed tank support to repel the powerful waves of the advancing T-34, but the few and exhausted Tigers battalions could not help them. As a result, the situation was saved by a small assault gun StuG III slightly higher than human growth. This self-propelled artillery installation was cheap, had decent armor and firepower, and managed to strengthen the defense of the German infantry, which was under heavy pressure, which had to fight off the inexorable offensive of the Soviet troops. Thus, the StuG III assault rifle defeated the Tiger in the Commander's Choice category.

In the 1944 year, the German Panther, whose combination of firepower, armor protection and mobility influenced the western tank building of the post-war period, comes out on top in terms of technical characteristics, and the Soviet T-34 / 85 becomes the most useful and effective production. The rather strange absence of American and British tanks in this list is explained by the mediocrity of such models as Sherman and Cromwell. Although the British "Matilda" in 1940 – 1941 for a short time ruled in North Africa, and the Sherman debuted quite successfully in 1942, the Western allies deserved applause only when the war was almost over. In 1945, the American M-26 Pershing in the nomination “Choosing a Tanker” pressed the powerful but overly heavy and unreliable German “Royal Tiger”. And M4A3E8 "Sherman" won in the category "Commander's Choice" due to its reliability, a large number and high-speed armor-piercing shells.

Those who know something about the design of tanks and tank battles, the information provided is mostly familiar. But Pledge skillfully sprinkles various amazing facts into the narrative. For example, the T-34 has impressive characteristics, but on the battlefield it turned out to be very unreliable. American experts who investigated the T-34 model 1942 of the year were amazed to learn that the resource of the diesel engine of this tank is just an hour in 72. And its air filter was so poorly designed that a tank on the dusty road could drive only a few hundred kilometers, after which the engine failed (the Americans also discovered that the British Cromwell had 199 man-hours for maintenance, while the M4A3E8 Sherman "Total 39).

Do these historical ratings have any significance today or are they only suitable for curiosity? After the 1945, the US military was carried away by the most modern weapons. If today's Pentagon could be moved back to 1943, he would certainly have decided to build Tigers, not Shermans and T-34.

Today, when the US military budget is experiencing a tremendous burden, trying to pay for the development and construction of extremely expensive weapons systems such as fighter F-35, it is worth remembering that the very small feature in the structure (tower for two people or more defective elements in software ) may be the most decisive impact on the effectiveness of the weapon. It does not matter how it looks on paper.