The desire for peace sometimes leads to war 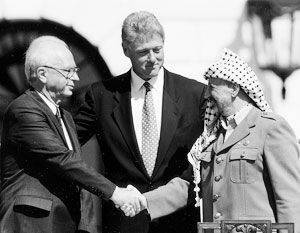 Exactly 20 years ago in Washington, the Interim Agreement on the West Bank and Gaza Strip was signed, which was the last in the series of so-called. agreements in Oslo. The consequences were disastrous: thousands of Jews and Arabs paid for this diplomacy with their lives. In this stories, as in a drop of water, reflects the very essence of a peace settlement in the Middle East.


This story began with betrayal, and ended with murder. At the end of 1992, the Israelis, in defiance of their own legislation, initiated secret negotiations with the leadership of the Palestine Liberation Organization. Already in August, 1993 had signed the first secret agreement in Oslo, and in September Israeli Prime Minister Yitzhak Rabin and PLO leader Yasser Arafat exchanged a historic handshake in Washington on the White House lawn under Bill Clinton’s approving smile. In 1994, Rabin, Arafat and another associate partner of the company - Israeli Foreign Minister Shimon Peres - received the Nobel Prize for "efforts to achieve peace in the Middle East." And in November, 1995-th Rabin received a bullet from a Jewish student Igal Amir.

“Poor Menachem, not easy for him. I got Sinai and oil, and what did he get? Scrap of paper

Но обо всем по порядку.
Up to a certain point, the concept of "Palestine" was absent altogether in the diplomatic dictionary of Israel. Neighboring Arab states acted as negotiating partners. Hence the well-established term “Arab-Israeli conflict” (and not “Palestinian-Israeli,” for example). The idea of ​​"Palestinians" as a separate people appeared relatively recently - largely due to the efforts of the main ideologue of this concept, Yasser Arafat. For the time being, the Israelis regarded Arafat solely as a terrorist, and any contact with his organization was prohibited. Nevertheless, it was Israel’s Deputy Foreign Minister Yossi Beilin who, bypassing the law, initiated secret meetings with the leadership of the PLO, first in London and then in Oslo.

Prime Minister Yitzhak Rabin did not immediately find out about this project. And when he found out, he was very unhappy and even wanted to ban further contacts, but soon changed his mind and gave the go-ahead. As a result, even before the signing of all the agreements, the Palestinians have already won two moves simply on the basis of the interaction itself: first, they were recognized as an independent negotiating partner, second, Yasser Arafat became their representative - probably the strongest lobbyist in Arab history national liberation struggle.

The very logic of the negotiations, too, was not in favor of the Israelis. The Palestinians demanded wide autonomy and their own security forces, while the Jews put forward demands of a declarative nature - to recognize Israel’s right to exist, to abandon the methods of terror, and so on. Arafat, of course, easily agreed - the promise to the infidels is cheap. The only problem for the PLO leader was to explain this gesture to the Arab public. But he coped with this: speaking with a program speech in Johannesburg, Arafat compared the Oslo agreements with the historical treaty in Khudaybiya, which the prophet Muhammad concluded with the Quraysh (the agreement was soon terminated, but the Muslims were the winners, having been legalized as partners in negotiations).

As a result, Arafat got what he wanted: the Palestinian National Authority was created, and most of the territories in the West Bank and Gaza Strip came under full or partial control of the PNA. In addition, the Palestinian police appeared - ten thousand Kalashnikov guns. Bonus to the main agreement became numerous agreements on cooperation in various fields - from security to the economy.
It is difficult to say what Rabin was guided by, writing off such preferences to the Palestinians in exchange for unsubstantiated promises to recognize Israel’s right to exist. Predicting the further development of events was not difficult, in fact, it was not required to predict. In the same Johannesburg speech, which Arafat delivered in 1994 year - at the height of the Oslo process - it was told not only about the treaty in Khudaybiya, but also about the continuation of jihad until the victorious seizure of Jerusalem. Ten years later, Mahmoud Abbas shared his memories and stated the obvious: “The Oslo agreement was a colossal mistake for Israel — we received the land, and in return we were not given anything.”

As a result, Israel swept a new wave of violence. Radical Palestinian groups, such as Hamas or Islamic Jihad, did not recognize the Oslo agreement and initiated a series of attacks involving suicide bombers. From September 1993-th to May 1994-th terrorist attacks occurred almost weekly, the number of victims increased dramatically. If in 1992, at the hands of Arab terrorists, 39 Jews perished, in 1993, already 62, and in 1994, 73. Tension has reached such a level that it came to retaliatory actions by Jewish extremists. In February, 1994-th orthodox Jew Baruch Goldstein shot Muslims in 29 in the Cave of the Patriarchs and was killed on the spot by an angry mob. Statistically similar incidents are rare, and this event has become the largest Jewish terrorist attack since the explosion at the King David Hotel (1946 year).

The PNA leadership did not oppose the wave of terror. Formally, Arafat held a peacekeeping position, developing the successes of the Oslo accords. At the same time, he overlooked the activities of radical Islamist groups, which expressed their attitude to the peace process through the murder of Jews. The tactic of "the left hand does not know what the right one is doing" brought Arafat success in the international arena. In the West, he acted as a peace envoy, in the Middle East he practiced jihadist rhetoric, and in the meantime suicide bombers continued to detonate bombs behind his back, ostensibly on their own initiative, ostensibly against the wishes of the head of the Palestinian National Party. As it turned out later, in fact, Arafat personally financed the terrorists, organized supplies weapons and paid the money to the families of martyrs.

It is not known how all this would end if a new player had not entered the historical arena. He made only one move - and put an end to the Oslo project.

His name was Yigal Amir, and he wanted to save Israel from destruction. 25 is a former IDF reservist (served in the elite brigade "Golani"), a law student at the University of Bar-Ilan, an orthodox Jew, who comes from a family of religious Zionists. On November 4, he shot Prime Minister Rabin, and he died in hospital in 40 minutes. The circumstances of this incident are covered with fog, and some believe that three bullets of Igal Amir were not decisive - the security services allegedly were involved in the matter, and the decisive shot was fired by another, secret shooter. But, anyway, after that Rabin left the stage forever. At the trial, Yigal Amir emphasized that he acted not out of revenge and not on religious pressure, but strictly rational: by eliminating Rabin, he hoped to bury the very idea of ​​Oslo agreements.

And he succeeded. Soon after the liquidation of Rabin, direct elections of the Prime Minister were held, and the “right” Benjamin Netanyahu defeated Rabin’s “left” successor, Shimon Peres. Netanyahu slowed down the Oslo draft agreements, and they gradually faded away.

Nevertheless, the consequences of the disaster were felt for a long time. A direct consequence of the Oslo agreements is the Al-Aqsa Intifada (2000 – 2005), in which more than a thousand Jews died. Also on the Oslo vector can be considered one-sided delimitation with the Gaza Strip, after which Hamas came to power and the rocket attacks on southern Israel intensified. The result: dozens of dead and hundreds of wounded Israelis. As a result of the response of Israeli military operations in the Gaza Strip - hundreds of casualties among Palestinians.
As is known, history teaches that history teaches nothing. The comprehensive failure of Oslo (initial failure, failure in the process, failure in the end) could serve as a lesson for the Israelis, but there is no reason to believe that this is not the first - the lesson will benefit anyone. Long before the Oslo story, back in 1980, Egyptian President Anwar Sadat commented on the Camp David Accords with Menachem Begin: “Poor Menachem is not easy for him. I got Sinai and oil, and what did he get? A piece of paper ... "

The Gordian knot of the Middle East is caused not only by historical upheavals, religious conflict and differences in mentality. The main problem is a systemic contradiction of goals from two sides. Israelis seek to build and strengthen their country; The Palestinians, of course, would not have refused to have their own state, but the number one task for them was not the construction of Palestine, but the destruction of Israel. With such initial data, any peace negotiations are at least meaningless, because in practice, any compromise moves by Israel, first of all, weaken Israel itself. And, from the point of view of many Israelis, the term “peace process” has long been turned into a synonym for concessions and defeats.