Notes of the Colorado Cockroach. Let's hit the statistics on a stupid head

30 September 2015
15
It's good when it's warm. Right fine. You can wander around Kiev all night. Glory to the Great Cockroach, there are no such heroes among our brother so far that they are on duty with grenades and pistols in the doorways. Peaceful we. Therefore, our race is much more ancient than the human race.


But I will begin today with sad things. We heard rumors about an explosion at a festival in Donetsk. Vile blast. Naturally, if you remember, the conversation turned to embroidery. I do not he there screwed up? We decided to warn, just in case, that if he was at least part of something, then he would live exactly until he returned to Kiev. Paws povydergivaem and throw on the pavement. To crush.

I told him about it and on the phone. So he swears: not me! I am peaceful. Moreover, I will come - I will tell you this and introduce you to this! Ahnete. Well, not long to wait.

And today I start with how I wandered to the statisticians. Well, not to the biggest. So, to the little things, but the topic is very interesting. Crimea and how we feed it. Therefore I will quote some materials. Ukrainian, specifically, materials. Because the Russian for some reason are different, and very much.

Infographics. Blockade in numbers: how much Crimea depends on Ukrainian goods.
http://www.liga.net/infografica/251718_blokada-v-tsifrakh-naskolko-krym-zavisit-ot-ukrainskikh-tovarov.htm

Have you looked? That's how good we are. Crimea, it turns out, without us, nowhere. Only now it is not clear why Crimeans do not know about it. Our Radhans among themselves say that for some reason the holiday among Crimean peasants ... Goods go "with a bang." And our people are already on the road going to throw out the bugs and the tsybulu.

And laughter, and sin. I wonder why Crimeans so much paint and varnish, for example? Probably all repainted several times already and varnished. Or are Ukrainian enterprises looking for loopholes and workarounds for at least a meager export? All through ... belly.

Eeeh ... Statistics are so statistics. I liked quoting smart. Nothing to write. Slapped a quote and sit, look. And most importantly, do not joke. There and so Zoshchenko in the next world from envy crying, I guess.

How many times have I heard and read in our media about the help of the whole world of the Ukrainian revolution. Well, there was not a single state, but what about a state, a person who would not give us the last penny or a cent. I listened and understood that either someone was lying, or someone had problems with his head.

"During the military conflict in Ukraine, 17 states on three continents rendered their material and technical assistance to the country. If you don’t speak about the countries that signed the Budapest Memorandum, for which such assistance is more a commitment, it turns out that several European countries donated to Ukraine Leaders, Distant Australia and Canada. "

This is the data of the Ukrainian Ministry of Defense. What about the whole world? Okay. What was there, also thrown off.

"The West has given armor. From the very beginning of the military conflict and to this day, according to the Defense Ministry, the partner countries have provided material and technical assistance to Ukraine for almost $ 70 million.
At the end of last year, the Pentagon’s spokesman, Colonel Steve Warren, said that the United States had transferred counter-Soviet radar to Ukraine. "

“Radar systems see the approach of mortar fire and quickly calculate the position of the enemy’s mortar shot,” Warren explained.

He added that the Ukrainian military themselves will determine where and when they will use these systems. The Pentagon noted that it is planned to transfer 20 similar installations.

At the same time, from the very beginning of the military conflict, the Ukrainian military massively rejected old Soviet body armor. Instead, the defenders of Ukraine preferred the Polish armor.

The law enforcement officers themselves have repeatedly pointed out that if it were not for the Polish body armor, the losses among the military would have been by 50-70% more. Such an opinion about the protective equipment was the fighters of those divisions of the interior, who left the encirclement near Ilovaisk.

Also at the beginning of 2015, the States handed over 5 high-speed inflatable boats to the Armed Forces of Ukraine.

"As part of the provision of material and technical assistance to the Armed Forces of Ukraine, another batch of cargo with 5 high-speed inflatable boats manufactured by Willard, Sea Force 730 and Sea Force 11M, which have a rigid body and equipped with all necessary means of protection, arrived from the USA." 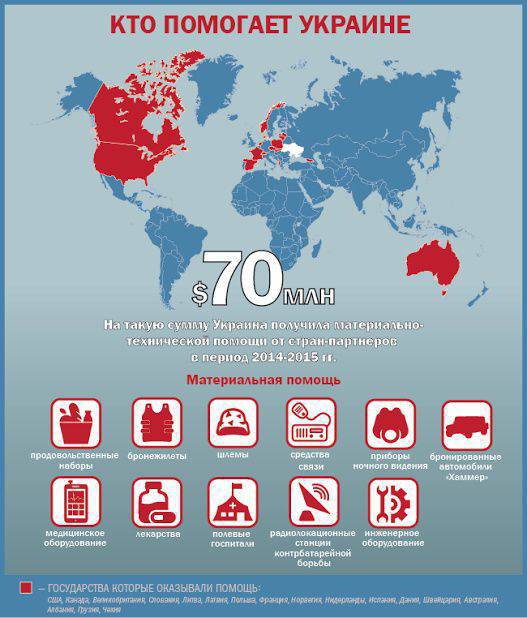 “Today, 10 of Hummer vehicles arrive in Ukraine. This is US military assistance to our country. In total, 230 of American vehicles should arrive in Ukraine,” said Andrei Lysenko, the presidential administration on military operations.

To what degree do you need to change internally to perceive it as an achievement? With the world on a thread - a naked shirt ... But most importantly, we are all obliged again. Must give, must do. Are required to finance. This idea was perfectly expressed by the former deputy chief of the General Staff of the Armed Forces of Ukraine Igor Romanenko:

"On the territory of Ukraine there was an army of strategic missile forces, which had at its disposal the third potential of the world after the United States and Russia, which we, under pressure from the so-called Nuclear Club, gave for a pittance. The cost of one rocket was more times than all this material and technical $ 70 million assistance provided over a year and a half. "

Once we were respected. We really were independent. We did not look into the mouth of any western political prostitute in the hope of a handout. We could help the poor ourselves. We could dictate terms in international affairs. We could produce everything. Let the quality was worse than the best Western models, but they could. From needles to space rockets.

So why are we now proud of poverty? Why do we have to invent history. Why do not we notice that the "hut is burning"?

And finally, about the good. Ukrainian farmers once again solved the global problem. Let not the level of digging the Black Sea, but still the world. We invented, attention, Ukrainian rejuvenating ryazhenka. This northern furry fox will now run to half of the world's perfume companies. Creams, masks, lotions and other now no one needs. Everything. Women will be young only from our ryazhenka. 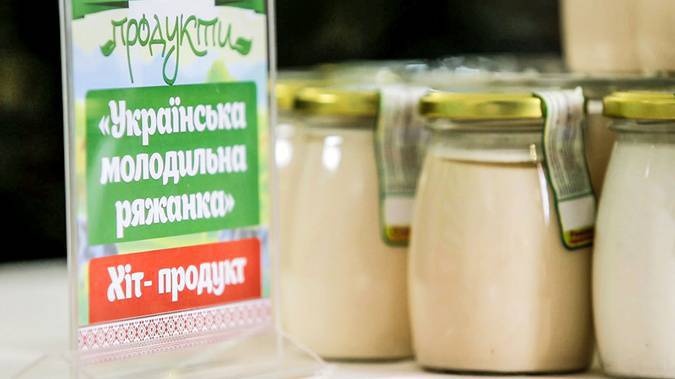 And as pioneers, I have the right to go to the MOV. Who wants to rejuvenate, let him teach.

"Ukrainian youth Ryazhanka" without GMOs, a yak prepared without preservatives, aromatizers, stabilizers, piece barvniki і be smakovih additives. Tse povnisty natural fermented milk product. Special warehouse warehouse ferment zberіg з зitsya in suvorіy taєmnitsі. It is worthwhile to get ready for the "secret" with the development of science by the Radian chasium at the Institute. O. Bogomoltsya. On the basis of the scope of the expert examination, it is necessary to "provide the necessary implantation of the Ryazhanka є vіdmіnnym zobіnnom іmunіtetu that zapobіga oldіnnyu organismu".

Envy the Russians, and most importantly, the Russians. And we will rejuvenate. Unless of course, as always over the past two years, we have not been deceived again.

See you soon. Perhaps very soon. If embroidery will arrive. Your Tarakan Okoloradsky.

Ctrl Enter
Noticed oshЫbku Highlight text and press. Ctrl + Enter
We are
Notes of the Colorado Cockroach. Between Christmas and Baptism ... chillyNotes of the Colorado Cockroach. Part of 14. Tse Europe!
Military Reviewin Yandex News
Military Reviewin Google News
15 comments
Information
Dear reader, to leave comments on the publication, you must to register.