Were aiming at Putin, and got into Obama

30 September 2015
63
The Western press commented on the speech of V. V. Putin at the UN General Assembly, the "backstage" talks between the Russian president and his American counterpart, and the recent TV show with Putin on the CBS channel. There have already been feedback from well-known politicians, such as Senator John McCain and Donald Trump, who dreams of becoming the president of the United States. McCain believes that Obama’s “unnecessary” meeting with Putin only played into the hands of the Russian president, and Trump found that Putin is “nicer” than even Trump himself. 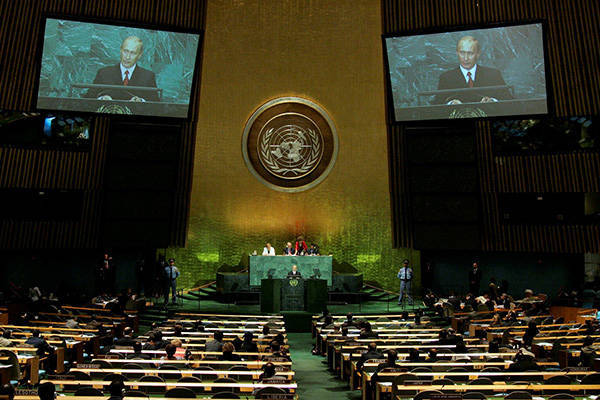 Mainly in the West, discuss the position of the United States and Russia on the Syrian issue. The talks between Putin and Obama here have essentially not changed anything. Obama insists on the need to transfer power from Assad to a new leader, and Putin warns: refusal to support the legitimate Syrian government will be a mistake. This is written by Ian Black and Julian Borger in a British newspaper. «The Guardian».

Putin said at the General Assembly that not to involve the Syrian army in the fight against the "Islamic state" is a "huge mistake", because the Syrian troops are the only force that "bravely, face to face" fights against terrorist fighters. The Russian president also criticized the West: after all, he is arming the "moderate" opposition in Syria, who then go over to the IG.

Obama in his address to the General Assembly noted that the United States is ready to cooperate with Russia and Iran to ensure the removal of Assad from power and the organization of the "transition period". Obama believes that Syria should not return "to the pre-war status quo."

The White House said earlier, journalists say, that Washington will approve of Russia's participation in the fight against IS, but Assad’s departure should be part of the decision. The White House believes that Assad is committing "bloody crimes" against the people, and it is this, as well as a long stay in power, that contributes to "replenishing the ranks of extremists."

Putin, in turn, rejects the war crimes of the Assad regime and speaks of “anti-Syrian propaganda,” observers indicate. “We support the legitimate government of Syria,” Putin’s publication quotes. “There is no other way to solve the Syrian problem, besides strengthening the existing legal state structures, helping them in the fight against terrorism, and, of course, simultaneously encouraging them to engage in positive dialogue with the healthy part of the opposition and to carry out political transformations.”

Writer and publicist Fred Kaplan ("Slate") I am sure that the key phrase of Obama in his speech at the General Assembly was this: "The United States is ready to work with any country, including Russia and Iran, to resolve the conflict in Syria."

The fact is that Mr. Obama has not previously spoken so openly about such an interaction. Indeed, the leaders of Russia and Iran have a common interest in defeating IG, but the White House could not openly join the alliance with them. There are three reasons for this, the analyst believes.

First known история US “tense relations” with these two countries: Russia and Iran.

Secondly, the “IS” is the result of the Sunni Arabs ’alienation by the Shiites in Iraq and Syria, and therefore an effective coalition against the movement should include Sunni leaders. They will be able to demonstrate that the "IG" is not the "legitimate spokesman" of their interests. This is the main reason Obama avoided joining forces with Iran a few months ago.

Thirdly, if Obama began to agree with Iran and Russia, then what about the slogan "Assad must leave"? Putin and Rouhani insist that Assad should remain, and only in this case, the fight against IG will lead to success.

So what about Obama? The analyst thinks that in his speech at the UN he tried to play along with both sides. He rejected the idea that the fight against terrorism means supporting "tyrants" like Bashar al-Assad bombing "innocent children" because "the alternative is certainly worse." (A hint at Russia's opinion.) On the other hand, actions against the “IS” can lead to the need to keep Assad in power in the short term (and remove from the presidential chair in the long term).

According to the publicist, Obama proposed a formula for solving the dilemma. This formula is a “realistic” compromise, as a result of which the “controlled transition” of power from Assad to the new leader of Syria will be organized.

The key phrase here is “managed transition,” notes the journalist. But it will not be Obama and his Western allies who will rule, but Moscow and Tehran. And how will Moscow and Tehran define the “new leader” if they believe that Assad can defend the country? Syria is also a foothold in Russia in the Middle East. For Iran, it is also important: it is a “gateway” through which Tehran’s regional interests are moving further west (especially in Hezbollah).

And what about Obama's politics? The United States has no vital interests in Syria, and Obama has no desire to get bogged down in a “dirty civil war,” the author writes. However, the war is expanding; hostilities threaten turmoil in the region, affecting American allies. In addition, there is a refugee crisis in the world. However, Obama’s creation of a coalition based on Sunni countries (Egypt, Turkey, Jordan, the Persian Gulf monarchy) did not lead to success: Sunni countries were rather weak in the struggle, and the most promising partner (Turkey) seemed more interested in defeating the Kurds than in the rout of the jihadists.

That is why Obama was forced to enter into an alliance with Iran, Russia and (“deep sigh” by the publicist), even with Assad. The author recalls that once Franklin D. Roosevelt and Winston Churchill resisted an alliance with Joseph Stalin to fight Hitler: after all, Soviet communism is also “evil”, even if it is “slightly less Nazism”. But without this union, they would not have become winners in the Second World War. The war against “IG” is not so “titanic,” the writer points out, but the principles here are the same. Sometimes the situation gives a terrible choice, and you have to stand on the side of the "less evil."

The famous German journalist Ingo Mannteufel writes about the choice of the “two evils”.

In the article “Putin is forcing to choose from two evils” on Deutsche Welle He notes that in his speech at the UN General Assembly in New York, Vladimir Putin made it clear that the coalition against the "Islamic state" will receive Moscow’s support in the UN only if the Assad government participates in it.

“With such a position, President Putin is forcing the West to choose between a bad and even worse option in the Syrian crisis: the US and Europe should recognize Assad as a de facto partner in the fight against IG terrorists,” writes a columnist. - Thus, not only would the stabilization of the regime of the Syrian ruler occur, but also the role of Russia as a global player in international politics would increase further. Isolation of Russia by the West as a sanction for Russian interference in the affairs of neighboring Ukraine would have been broken. ” “If an agreement with Putin is not reached,” the journalist adds, “the current situation in Syria will evolve according to the previous scenario: the deadly war in the Middle East will drive away millions more, probably, first of all, in the direction of Central Europe.”

Marina Koren (Marina Koren) in "The Atlantic" tried to scold Putin, but for some reason Obama got the nuts.

“Last spring,” writes the journalist, “Russia ignored one UN resolution that recognized the annexation of Crimea as illegal, and blocked another one that called for a Syrian conflict to be considered at the level of the International Criminal Court investigating war crimes ...”

In a speech delivered at the General Assembly, Putin behaved, as observer John Schindler put it, as if "a new sheriff in the city."

Putin taught the United States: he said that when it comes to the "Islamic state", America behaves incorrectly - makes a "huge mistake", not wanting to cooperate with the Syrian government and its armed forces.

In addition, Putin ridiculed the "single center" of power in the form of the United States, which supposedly was used to dominate, based on the postulate of its own "power" and "exclusivity."

According to Koren, after the mutual accusations of Putin and Obama in a personal meeting of the presidents can hardly find any meaning.

Such a meaning was found by John McCain: the meeting, in his opinion, was beneficial to Putin. This senator in writing told the press.

As rebecca keel writes "The Hill"Republican Sen. John McCain harshly criticized President Obama for meeting with Vladimir Putin. According to him, Obama gave Putin exactly what the Russian president wanted.

Obama's decision to meet with Vladimir Putin is a mistake, there is no need for him, according to McCain, who circulated his own statement in the press. Obama, according to the senator, turned out to be a toy in Putin’s hands: the current American president himself is destroying international isolation around Putin, undermining US policy and making Putin’s “legitimate” destabilizing behavior, “dismembering” Ukraine and supporting Bashar al-Assad in Syria.

According to McCain, the Syrian conflict does not require a meeting between the heads of two states - the United States and Russia. The senator is convinced that Putin’s true intentions are to support Bashar Assad. A Republican criticized the White House, "entangled" in Putin's intentions.

McCain himself knows exactly what Putin wants: the Russian president creates a coalition with Syria, Iran and Iraq, supports Assad, wanting to undermine US policy and ultimately expand Russian influence in the Middle East "to an unprecedented degree in the last four decades."

The correct American response to Russia, according to Mr. McCain, lies "beyond the capabilities of President Obama."

There was a person in the USA who liked Putin.

Donald Trump, whose statements were published by the newspaper The Washington Times, believes that Putin is a more pleasant person than he, Donald Trump.

Putin was interviewed by Charlie Rose, and billionaire Trump by Scott Pelli. According to the businessman, Pelly interviewed him harder than Rose - Putin. Moreover, the "hardness" was "fair."

Why is Putin treated "softly"?

“I would say, because Putin is a much more pleasant person than me,” said a likely presidential candidate.

An interesting twist, add on my own. What is it, Mr. Trump? A hint at the friendship of nations?

Observed and commented on Oleg Chuvakin
- especially for topwar.ru
Ctrl Enter
Noticed a mistake Highlight text and press. Ctrl + Enter
We are
Overseas ally? Donald Trump - US Presidential CandidateSyria: Americans scare themselves, and Asma Asad buys chairs
63 comments
Information
Dear reader, to leave comments on the publication, you must to register.