29 September 2015
172
Undoubtedly, the speech of the President of Russia at the jubilee session of the UN General Assembly will be the subject of discussion and interpretation for a long time. But the fact that many of those who listened and heard, what Putin said, made a strong impression. 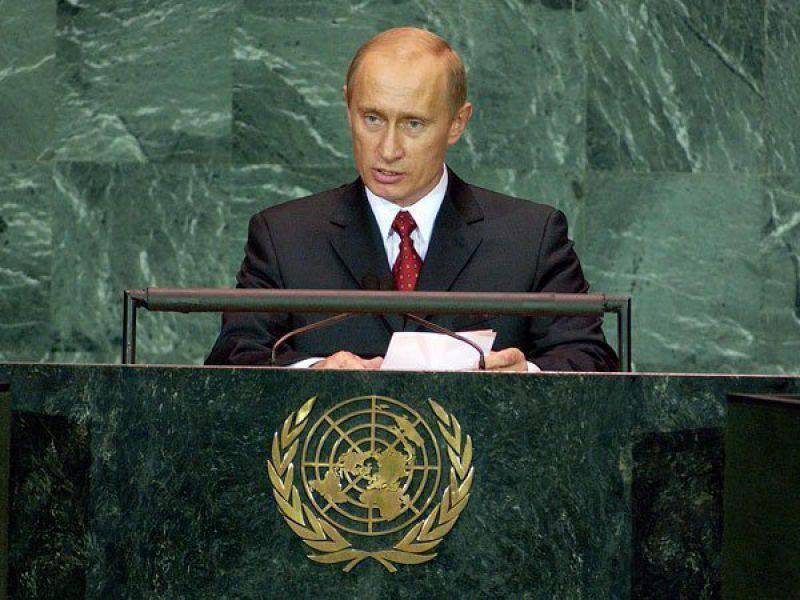 What our president said is one question. For whom he said - this is completely different. And it is on the second question that attention should be focused.

It is very significant that Putin spoke after Obama. Yes, Obama's speech was not a diplomatic masterpiece, rather, on the contrary. Speech was compared to a certain sermon. Almost nothing we have heard. The usual stories about how to live well under American democracy, how bad Russia behaves, what a mighty country is America.

Nobody heard anything concrete from the head of the United States on what he, as head of state, is going to do to solve the problems of today. Yes, the speech was velvet, flowery, spent. But the specifics did not carry. The maximum is promises for those who follow the path of the United States and for the United States. Well, through the sentence - "Assad must go."

Unlike the American colleague, our president acted from a more aggressive, but constructive position. All the points that Putin outlined in his speech could be stated very briefly and clearly.

1. There can be only one hegemon in the world. And this is not the United States, no matter how much they want it. This is the United Nations.

Putin focused on the fact that in our time the role of the UN, especially its Security Council, is leveled by individual countries. He recalled what fate befell the League of Nations in the thirties of the last century. And he said that Russia stood and will stand on the principles that only the UN can be a platform for resolving any disputes and conflicts.

Russia perceived and will perceive the UN as a subject of law, and not as a tool for solving its local problems, as some Russian partners.

25 years of domination of one country on the world stage led to the fact that the role of the UN was forgotten. And Putin’s speech was a kind of call for the UN to return its role in solving world problems. Not a “place to talk,” but a place to make decisions. And what's more, for decisions that will be executed.

2. The threat of terrorism. Here was a landmark comparison. The need to organize an anti-IGIL coalition in comparison with the anti-Hitler coalition.

Indeed, the threat of terrorism today is more obvious than ever. And the need for an uncompromising fight against ISIS and its allies is one of the priorities that must be carried out jointly. The whole world.

Here Vladimir Vladimirovich a little diplomatically misdeed. The coalition actually already exists. And a start was made by the organization of the information center in Baghdad. So those who wish can catch up with those who do not want the Third World War in the Middle East.

Little was said about Assad, but significantly. Assad is the legitimate president of Syria. The Syrian army and the militias are the only ones who resist ISIS. Therefore, Russia will provide military assistance to Syria.

(I would like to see the faces of those who intensely exaggerated the topic "Russia abandoned Syria." - Approx. The author.)

3. "Integration into Integration". It was about real integration projects on a global scale. On the inadmissibility of "backroom" sanctions. The fact that such sanctions can finally shatter the global economy.

In the opinion of Putin, the WTO should deal with all economic issues as the economic counterpart of the UN. And another "delicate moment." Putin talked about the main instrument of the decision, meaning not the WTO, not the “Seven”, but the “Twenty”. It is the G20, in his opinion, that should become the backbone of the WTO so that the latter does not become just a sign to serve the interests of the United States.

4. The era of the "export of revolutions" must become a thing of the past.

Mistakes committed in the past by the Soviet Union, and those that continue to be made by the United States, will only lead to vain victims. And lead now in Ukraine and the Middle East.

There were a few moments, but these are the main ones.


For whom did Putin say? Yes, the tribune of the UN General Assembly is a tribune of world scale. Putin waited. They were waiting for his speech, they expected some kind of breakthrough from her. And Putin, I hope, did not disappoint.

Russia in his face acted tough. Never once said the name of the culprit in many world problems, nevertheless, Putin clearly outlined who was behind the recent recent “democratic revolutions” who repeatedly violated the UN Charter. But it was quite an expected position. Position is not just a force backed by nuclear weapons or tank armadas, and the position of power, supported by rightness.

In fact, Putin asked a question to world leaders: "Do you understand what you brought the world to?"

On the other hand, Russia does not act as a contender for the world crown, as the United States. And as an ally or friend for everyone who wants to live in a calm and stable world. Putin quite openly appealed not to potential allies, but to all sensible people.

Russia should see a friend and helper in solving the most complex problems. It was a friend, not the "first and foremost." Strange as it may seem, but Russia does not claim to be the world master. But she is ready to cooperate with everyone. And this Putin voiced quite specifically.

And, by the way, listening to some European leaders (and not only European ones), concluded that the words of Hollande, Merkel and Rahoy (the Prime Minister of Spain) confirmed. They want to see Russia among those who will put out the next global fire. Who will enter the new coalition is a question, but for some reason many people want to see Russia there.

Putin spoke for everyone who has not lost the ability to soberly assess the day to come. For those who are ready to cooperate with Russia for the sake of the future world. As the meetings of the President of Russia during the Assembly showed, there is no talk of any "isolation" of Russia. No matter how hard some of the "partners" try to present.

Of course, a lot will depend on the talks between Putin and Obama. But the fact that these negotiations took place already speaks volumes. But we will learn about the results a little later and not immediately. But a start has been made.

And one more little historical moment. This is the seventieth General Assembly of the United Nations. And you need to remember the name of the person who made a titanic effort to create the United Nations itself already in the distant 1945. The very UN whose principles today are so fiercely defended by our president. The person who prepared two-thirds of the documents on the basis of which the UN works. Brilliant Soviet diplomat Andrei Andreevich Gromyko.

Ctrl Enter
Noticed a mistake Highlight text and press. Ctrl + Enter
We are
The tragedy of the American army ("The Atlantic", USA)Situational analysis of the death of the MH17 flight (Malaysian Boeing 777), made on the basis of engineering analysis from 15.08.2014
172 comments
Information
Dear reader, to leave comments on the publication, you must to register.