The project of the combat module "Arbalet-DM"

October 9 2015
11
In recent years, remotely controlled combat modules with machine-gun armaments have become widespread. Such systems have already managed to establish themselves as an effective and convenient means of arming light army armored vehicles. Remote-controlled machine gun modules have acceptable firepower, and also allow you to keep free space inside the base machine. Such weapons systems are being developed both abroad and in our country. One of the domestic developments in this area is close to the beginning of mass production and operation in the army. In the near future, a new domestic combat module "Crossbow-DM" should be put into service.


Promising domestic combat module "Crossbow-DM" was developed by specialists of the company "Weapons workshops ”and Kovrov Electromechanical Plant. During the recent Russia Arms Expo 2015 exhibition, Oleg Kruglyakov, Deputy General Director of Arms Workshops, spoke about the current status of the new project. According to him, the Arbalet-DM combat module is currently undergoing the final stage of state tests. The authors of the project expect that by the end of the year the new product will be adopted. Thus, the serial production of this equipment can soon begin, followed by the installation of modules on military equipment in the troops.

Module "Crossbow-DM" is proposed for arming various armored vehicles and military vehicles. So, for the first time this system was demonstrated on the Tiger armored car. Subsequently, the module was installed on the Typhoon armored car and the ANT-1000P robotic system. Finally, at the RAE-2015 exhibition, an MT-LB armored vehicle with a promising combat module in place of the native machine-gun mount was demonstrated. It cannot be ruled out that in the future the module can be installed on another technique. So, in some sources it is claimed that the carrier of the module of the new model can be various wheeled and tracked vehicles, as well as river boats. In addition, it is possible to use the combat module as a weapon of a stationary guard point. 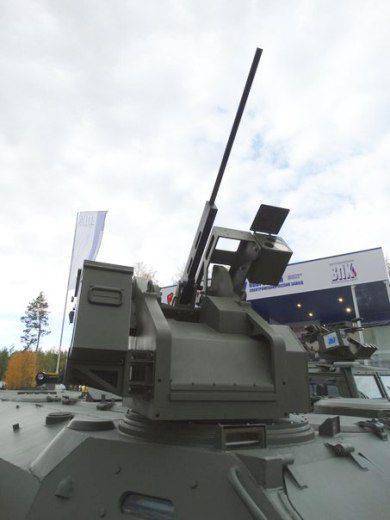 The combat module "Arbalet-DM" at the RAE-2015 exhibition. Photo Vestnik-rm.ru

It should be noted that the samples of the combat module that were shown at exhibitions of recent years have some noticeable differences. Not only some details have changed, but also the overall layout of the product. For example, on an early sample, a block of opto-electronic equipment was placed under the machine gun, and not to the side of it. Thus, the sample installed on the MT-LB was seriously different from the system shown several years ago on the Tiger armored car.

The product "Arbalet-DM" is universal not only in terms of installation on various machines. Depending on the wishes of the customer, this system can receive various weapons. The combat module can be equipped with a PKTM machine gun rifle caliber or large-caliber systems, such or "Kord". In this case, as follows from the available data, the design of the module does not depend on the type of weapons used.

"Arbalet-DM" can be installed on various combat vehicles. This feature of the product is associated with its design, originally designed for use on various techniques. A characteristic feature of this system is its low weight. The total weight of the combat module does not exceed 250 kg. Such a small weight of the module is associated with its original design. A number of technical solutions, such as the placement of the cartridge box, reduced the mass of the entire structure.

The main element of the module is a turntable, made in the form of an aggregate of complex shape. On the base platform with rotational drives around the vertical axis there are two vertical posts with fastenings for armament and vertical pickup mechanisms. The front part of the latest version of the module, both the central casing and the side posts, has a characteristic inclined shape. A swinging device with machine gun mounts is hinged on vertical racks. The design of the combat module allows you to direct weapons in the range from -20 ° to + 70 ° in the vertical plane. Horizontal guidance - circular. 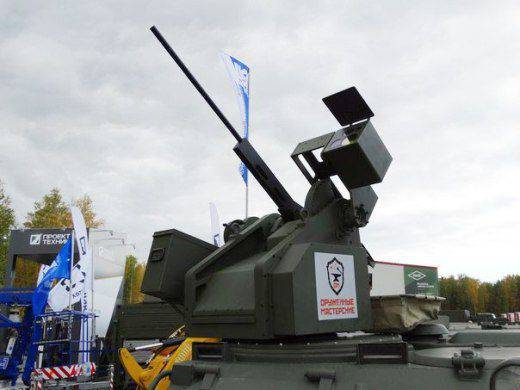 The combat module "Arbalet-DM" at the RAE-2015 exhibition. Photo Vestnik-rm.ru

On the right side of the module there are fasteners for the box with cartridges. Ready to use ammunition, depending on the type of machine gun, can reach 450 ammunition. To feed the tape with cartridges to the machine gun, the swinging device of the module has a special curved tray. Tray provides removal of the tape from the cartridge box and its uninterrupted flow to the receiving window of the machine gun. To the left of the machine gun is a small pipe to reset the sleeves. A sample of the combat module installed on the MT-LB machine and demonstrated at the RAE-2015 exhibition received a sleeve case made in the form of a canvas bag on a metal frame.

To the left of the machine gun there is a removed frame with mounts for the opto-electronic unit. The equipment is placed inside a metal casing with a movable front cover. According to available data, the sighting system PK-SU IPTSYU.201219.026 with a television camera, a thermal imager and a laser rangefinder is used as part of the combat module Arbalet-DM. This equipment allows you to detect typical targets and recognize it at distances of at least 2,5 km. Optical electronic systems are used both to detect targets and to target weapons and monitor the results of an attack. Maximum detection range is provided during the day when using the camera.

For operation in the dark, the opto-electronic unit is equipped with a thermal imager. The latter provides detection and recognition of typical targets at distances up to 1,5 km. Another “eye” in the front wall of the metal casing is designed for a laser range finder. This device is designed to determine the distance to the target in the range of distances from 100 m to 3 km.

The applied aiming complex with a two-channel optical-electronic system allows monitoring the surrounding space at any time of the day and in any meteorological conditions. It also provides target identification with subsequent use of weapons. 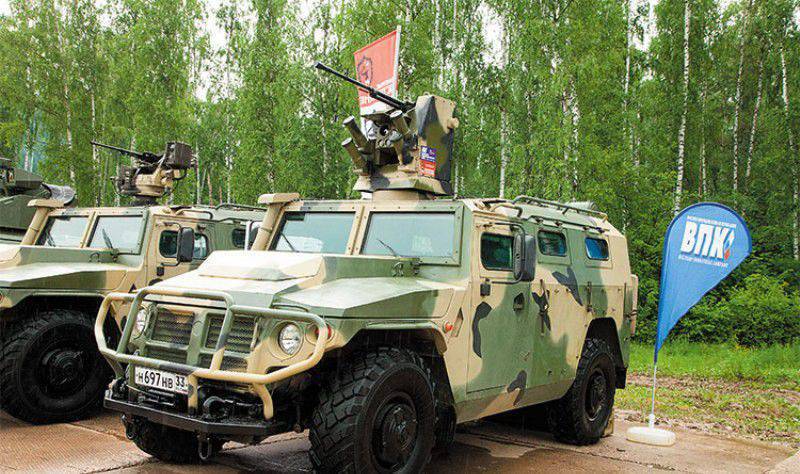 An early version of the combat module on the Tiger armored car. Photo Trucks.autoreview.ru / Arms-expo.ru

Control of the combat module "Arbalet-DM" is carried out with the help of a remote control installed in the cab of the base machine. The console is equipped with a large LCD screen and controls. The screen displays the signal from the camera or thermal imager, as well as other data.

Earlier, the exhibition showed a variant of the Arbalet-DM combat module, equipped with four smoke grenade launchers. At the recent exhibition RAE-2015, a new version of the module was shown, equipped only with machine guns. For some reason, it was decided to abandon the means of disguise.

According to the latest data, the Arbalet-DM combat module is currently undergoing state tests. All checks should be completed in the near future, after which the military department will make a final decision on the fate of this development. The company-developer hopes that this product will suit the military and will be put into service. The decision will be made within the next few months.