29 September 2015
23
General Hawk Carlyle, head of the U.S. Air Force’s Combat Command, recently announced that the U.S. military aviation may in the very near future receive new laser weapons suitable for practical use. According to the general, this day is closer than it might seem. Indeed, one of the American projects of an air-based combat laser has achieved certain successes and may end in successful arming. The HELLADS system is currently preparing for field trials.


The development of the project HELLADS (High Energy Liquid Laser Area Defense System - "The defense system based on high-energy liquid laser") is the responsibility of General Atomics Aeronautical Systems. The aim of the program is to create a promising weapon system, which is based on a laser with a liquid working fluid. The program started in the middle of the last decade. Since that time, American experts have been able to show good results. Thus, in less than ten years, the power of prototype devices has grown more than a hundred times. Existing developments are planned to be used to create weapons intended for combat aircraft and UAVs. It is assumed that such plans will be implemented over the next few years.

The basis of the project HELLADS is the so-called technology. liquid lasers. Such equipment has some advantages over solid-state or gaseous working lasers. Thus, a liquid laser equipped with a working fluid cooling system can operate continuously for a longer time compared to a solid-state one. In addition, there are some other technological advantages. However, despite the advantages, for a long time, this technique did not receive proper attention. 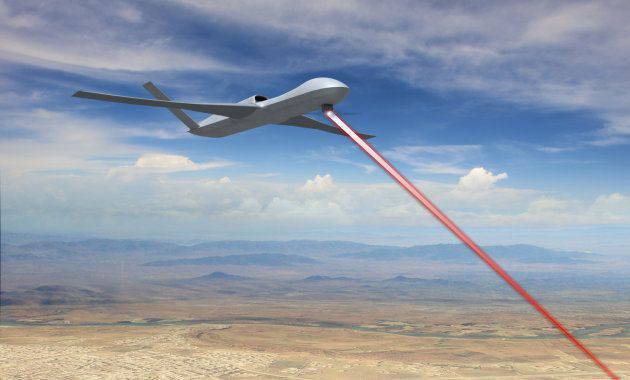 The use of the HELLADS system drone Avenger. Figure Engadget.com

Preliminary work on the new program started in 2006 year at the initiative of the agency DARPA. General Atomics Aeronautical Systems has received an order to study the subject of combined laser systems, which include solid-state and liquid lasers. The project received the designation HEL (High Energy Laser - "High Energy Laser"). The combination of solid-state and liquid lasers, as expected, will combine the advantages of the two systems. From the solid-state laser it was planned to take the radiation power, from the liquid one - the possibility of long-term work.

In 2007, the first prototype of the combined HEL laser system was manufactured. At that time, this device had a power level of 1 kW. By the end of the same year, another prototype showed power 15 kW. 2007 laboratory tests of the year demonstrated the vitality of the original idea, which allowed the work to continue. According to the test results in 2008, the project entered a new stage. Lockheed Martin was involved in the work. Two development companies received a common task. In the framework of joint work, they must create a promising system of aircraft armament based on new technology.

It should be noted, the agency DARPA did not focus on one project. In the fall of 2007, Textron Systems received an order to develop an alternative laser system. This company has been working on its own technology of a solid-state laser with a ceramic working medium called ThinZag. This technology was planned to be used in the new project. In the future, Textron Systems specialists were to use their laser in a promising aviation system. weapons.

According to the plans of the end of the last decade, a finished laser weapon model created by General Atomics Aeronautical Systems and Lockheed Martin should have a power level of 150 kW. It was expected that at the end of 2012, a prototype of the new system would be sent to the test site, where tests would begin soon. During 2013, it was planned to continue work on the creation of various auxiliary systems. The finished sample of the system, known by this time as HELLADS, was planned to be presented in 2014.

Earlier it was claimed that one of the main goals of the project is to create the most lightweight system with sufficient power. Thus, the ratio of power and weight of the structure should be at the level of 11 pounds (about 5 kg) per 1 kW of power.

Due to certain reasons, work on the project was delayed and the deadlines for the implementation of the plans shifted. However, to date, General Atomics Aeronautical Systems and Lockheed Martin have presented a model of a promising laser system. In April, 2015 for the first time showed to specialists and the public a model of a new weapon of the so-called HEL system. 3 generation.

In its current form, the HEL system is a container with a set of special equipment. Lithium-ion batteries, a liquid-cooling system for lasers, separate emitters, and optics to collect radiation into a single beam are installed in the general case. As part of the system shown, it is proposed to use the so-called. cells - unit cells. One such module is equipped with a 75 kW laser. Thus, by collecting several cells in one unit, you can change the total power of the entire system.

According to the developer, to date, it has been possible to ensure the optimum temperature conditions of the laser operation, which allows the system to work for a long time. An efficient cooling system provides the ability to work to fully charge the batteries without reducing the radiation power. At the moment, the duration of the continuous operation of the laser exceeds 30 with.

On the basis of the HEL system cells, various weapons can be built for different carriers. So, in the configuration for combat aircraft, the system receives the name HELLADS. According to reports of the beginning of the year, the air-based system was supposed to be tested in the summer of 2015. In the future, it is planned to carry out the refinement of these weapons and, over time, introduce into the nomenclature of weapons of modern and prospective combat aircraft.

The HEL 3 generation laser is also offered for use on warships. It is assumed that the destroyers of the type Arleigh Burke will be able to get a laser gun with two modules of power 75 kW each. Thus, the total power of a single laser complex will be 150 kW. Further, an additional increase in the power of the ship-based laser systems is not excluded.

Currently, the specialists of the companies involved in the project continue to develop and improve the systems already created. For this year, the first tests are planned in the conditions of the landfill, the results of which will determine the necessary improvements. Thus, over the next few years, American experts will be busy checking and fine-tuning the new project.

All current work should be completed by 2018, when, according to current plans, a new phase of testing of several HEL programs should start at once. It is in 2018, the year it is supposed to produce a suspension container with laser weapons, which will be tested on serial aircraft. The first carrier of a promising HELLADS system should be the unmanned aerial vehicle General Atomics Avenger. This machine will be used as a platform for conducting tests in the air.

Despite the relatively small size and take-off weight, the Avenger UAV must cope with this task. According to available data, a container with equipment with a power of 75 kW has a length of no more than 1,5 m, and its cross section fits into a square of 0,5x0,5 m. The mass of the system does not exceed several hundred kilograms. Thus, the proposed container of the HELLADS system can be transported and used both by the Evanjer and other US-made aircraft, manned and unmanned. 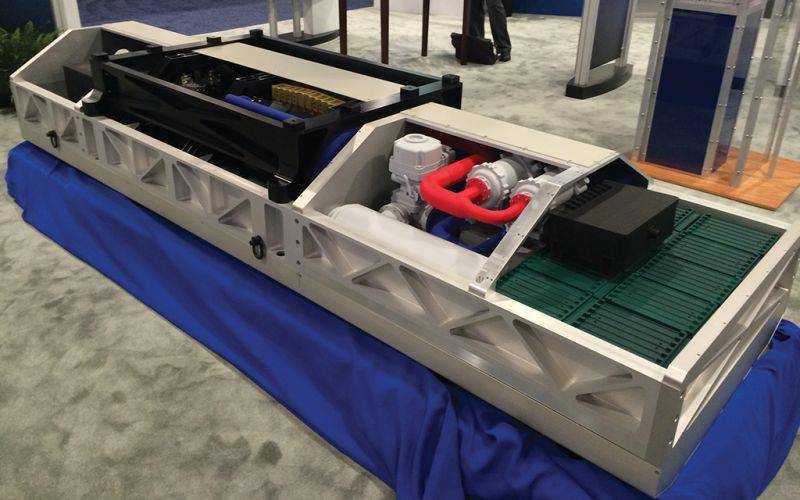 Also in 2018, a prototype of the ship-based HEL laser complex should appear. Using the available opportunities, the authors of this project intend to equip the ship-borne laser installation with powerful systems of power supply, cooling, etc. Due to this, a radiation power of at least 150 kW with corresponding combat efficiency can be achieved.

Later, in the beginning of the next decade, General Atomics Aeronautical Systems and Lockheed Martin should complete the development of a complex based on the HEL system, designed for installation on land vehicles, from army vehicles to armored vehicles. As in the case of the aviation system HELLADS, the development of this project is associated with a number of design difficulties. The ground version of the laser weapon with the required power should have small dimensions and weight.

Laser units of the HEL family are offered as a multi-purpose weapon. Such weapons can be used to defeat various ground, air and surface targets. In this case, the range of potential targets can include both equipment and various weapons. With appropriate detection and guidance systems, HEL lasers can be used to intercept missiles, etc.

To date, the authors of the HEL project have achieved some success. In the near future, it is planned to continue the development of a promising system and bring it to the test as a weapon for ships or aircraft. Approximate dates of the beginning of tests are already defined and test carriers are selected. How will the tests and how the project will be finalized - time will tell. Nevertheless, it is possible that General H. Carlisle will be right, and the HELLADS system, and then other laser weapons, will be put into service over the next few years. In the meantime, specialists from General Atomics Aeronautical Systems and Lockheed Martin are working on improving existing cells and preparing advanced systems for future tests.